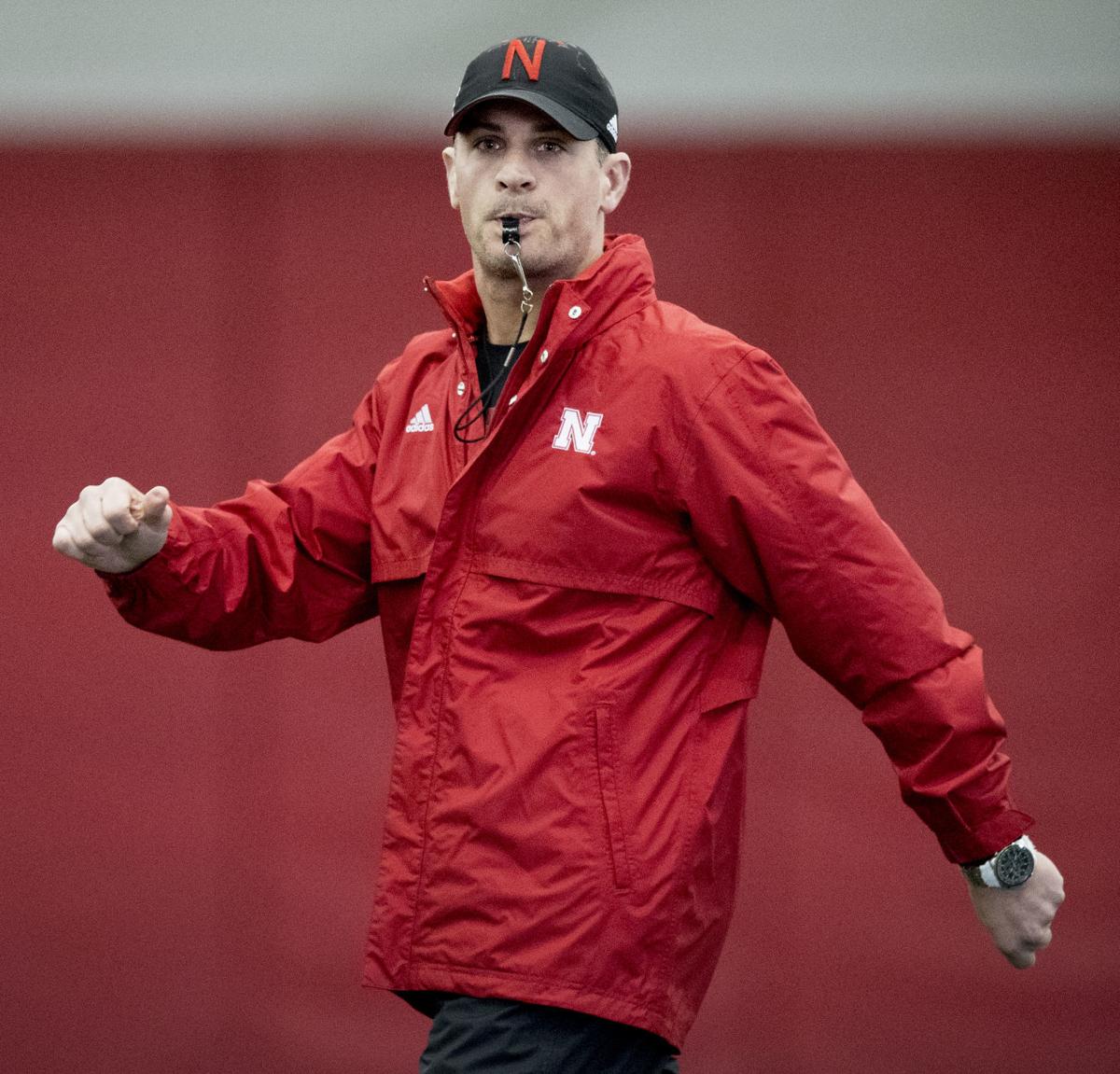 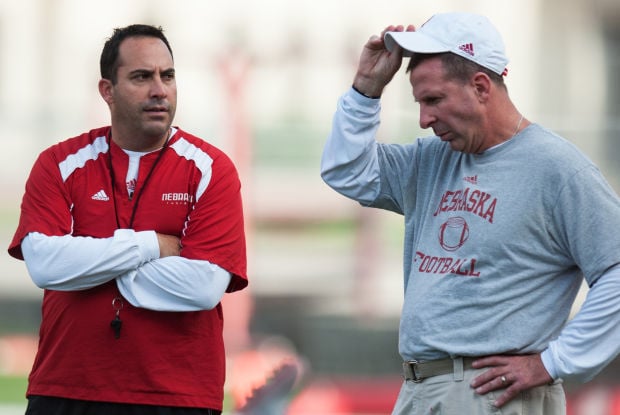 Former Nebraska head coach Bo Pelini (right) talks with defensive coordinator John Papuchis on the sidelines during football practice at Hawks Championship Center in 2014. Papuchis has been hired to coach defensive ends and to serve as special teams coordinator at Florida State.

Things I know, and things I think I know (fresh start edition):

Bob Diaco is back in the Big Ten, and Nebraska football fans have to admit it's intriguing, right?

Perhaps they can even admit there's at least part of them that feels good for Diaco, who's reportedly set to become defensive coordinator at Purdue.

Don't you at least have to admire his resolve?

Nobody asked me, but I fully admire it.

Diaco's lone season as Nebraska's defensive coordinator in 2017 was an utter disaster. He inherited a unit that was relatively inexperienced and not overly talented, and some defenders essentially quit on him late in the season. It became painful to watch.

But Diaco isn't a quitter. That's become glaringly apparent in the way he's come back from Mike Riley's dismissal as Nebraska head coach in late 2017. The entire staff was let go.

Indeed, Diaco can preach to players the importance of resilience, because he's done what it takes to resuscitate his career.

In March 2018, Diaco landed a job as a defensive analyst at Oklahoma. Analysts don't count toward the limit of 10 assistant coaches. Analysts generally do a lot of their work behind the scenes. I was struck by Diaco's willingness to take such a job. I mean, one of my lasting images of Diaco as a Nebraska assistant occurred when he materialized after a 42-35 loss at Oregon wearing a perfectly tailored suit complete with a "Blackshirts" handkerchief.

For all his quirkiness, Diaco possesses the aura of a big-time coach, however one defines it. He was big time in 2012 as Notre Dame's defensive coordinator, when he earned the Broyles Award as the nation's top assistant.

He parlayed his success at Notre Dame — his 2012 unit helped the Irish reach the national championship game — into a head-coaching gig at Connecticut. After finishing 11-26 at UConn, he ended up at Nebraska.

It was a curious hire by Nebraska. It eventually became clear that former NU athletic director Shawn Eichorst exhorted Riley to hire Diaco and fire Mark Banker. It was all sort of pathetic — Riley firing Banker by phone while Banker was on the road recruiting. A proud program with weak leadership was careening toward depths many Husker fans never imagined.

Nebraska's switch to Diaco's 3-4 system never found much footing in 2017. Diaco seemed overly intent on limiting big plays. The record shows he was at least somewhat successful in that regard, allowing 54 plays of 20-plus yards to rank 44th nationally.

Purdue this season allowed 77 plays of 20-plus yards, ranking last among Big Ten teams. Nick Holt, the Boilermakers' co-defensive coordinator and linebackers coach, was shown the door by Jeff Brohm.

Enter Diaco, who will presumably reunite with Purdue co-defensive coordinator Anthony Poindexter, Diaco’s coordinator at Connecticut. Diaco could find stability with the Boilermakers because Brohm clearly is on solid ground, this season's 4-8 finish notwithstanding. This will be Diaco's fifth different stop since 2014; he could use some stability, and a fresh start in the Power Five.

When his Louisiana Tech defense shut out Miami last week in the Independence Bowl — to improve Tech's record to 10-3 — it was easy to imagine Diaco landing a Power Five gig. I actually thought it would be a higher-profile move than going to Purdue.

Diaco's only 46. If he puts some serious bite into Purdue's defense, he'll perhaps get another crack at an FBS head-coaching job.

You think that's a crazy notion? I don't think it's crazy because Diaco's passion for his profession is evident to anyone he meets.

His passion helped him rebound from a rough patch in his career.

Yeah, that's something to admire.

So, Papuchis heads to sunshine from darkness. Maryland's home field is one of the most poorly lit stadiums I've encountered in 25 years of covering Nebraska football full time — including every road game.

And you wonder why I look like I do.

* Frank Solich just keeps rolling along. The 75-year-old former Nebraska head coach reportedly has signed a multi-year contract extension at Ohio, where he's 112-81 since taking over as head coach in 2005. He's chasing what's been an elusive MAC championship.

Yes, Solich is still "moving around" just fine. What a career.

* Took in a Denver Nuggets game this past weekend in Denver. One takeaway: Nikola Jokic's three-point shot is a sight to behold. He's a 7-footer with a high release point — and an arc that brings down rain, er, snow.

* A headline atop Tuesday's front page of the Journal Star caught my eye: "Nebraska edges closer to 2 million mark."

We're talking about population, and I prefer it stays at 1.9 million. If I'm making excuses for the Nebraska football program during family functions, it sounds better to say the state has only 1.9 million people. Just sayin'.

Plus, I like wide-open spaces and quiet. Plenty of quiet. And get off my lawn. LOL.

* Happy New Year to all. Embrace the fresh start.

And thanks to everyone for reading our work.

Steven M. Sipple: Simmons' story of redemption can uplift even the grouchiest of grinches

"I see all the adversity and chaos that everybody else sees, but I don't see the benefit of feeding into it.

Steven M. Sipple: Frost may not be caught up in QB discussion, but it's an intriguing one

Incoming freshman Logan Smothers clearly embraces the notion of heated competition, because he jumps into a loaded Nebraska quarterback room.

A looming visit from a touted receiver prospect prompts a deeper dive into Nebraska's Class of 2020 optics.

The former Husker football coach's extension runs through the 2021 season.

A pair of promising Nebraska signees will showcase their talent on national television before arriving in the program's Class of 2020 haul.

The latest Nebraska football player to enter his name in the transfer portal is walk-on linebacker Jordan Paup.

Kpai made the transition from the pitch to the gridiron in seventh grade. Not a bad idea for the newest member of Nebraska's recruiting class.

The news isn't necessarily a surprise. But the finality of Maurice Washington's dismissal from the Husker football team is significant.

Former Nebraska head coach Bo Pelini (right) talks with defensive coordinator John Papuchis on the sidelines during football practice at Hawks Championship Center in 2014. Papuchis has been hired to coach defensive ends and to serve as special teams coordinator at Florida State.