Nebraska running backs coach Ryan Held said midway through last week that he was encouraged by what he saw from his group during the late stages of spring drills.

You saw evidence Saturday of what he meant.

Held said he wanted his guys to finish the spring on a high note, "and then it needs to be 'Rocky IV' during the summer."

With due respect to Sylvester Stallone, Dolph Lundgren, Carl Weathers and Brigitte Nielsen, it felt necessary to ask Held exactly what he meant by his "Rocky IV" analogy.

"That's something I think our guys will do. But I'll challenge them because what they do when no one else is looking is going to determine what happens out on this field."

Nebraska fans probably like the sound of that. After all, this is a program that needs a fourth-and-1 mentality right now, you know, considering it has five losing seasons out of the past six.

Although Held is in his fourth year at Nebraska, his group of running backs remains mostly unproven other than a few (Rahmir Johnson, Ronald Thompkins and Marvin Scott) who had spot duty last season. Remember, the Husker staff thought Maurice Washington could be a star at the position by now. That didn't work out.

Nebraska has a proven collegiate running back in USC transfer Markese Stepp, but he missed almost the entire spring with a left foot injury for which he recently underwent surgery. He's expected to be back in training this summer. In addition, redshirt freshman Johnson (eight carries for 30 yards in 2020) missed virtually the entire spring for undisclosed reasons.

Because of injuries and other factors, Held was down to only two scholarship running backs in some practices. It wasn't a good look for a program with a proud running back tradition.

But the tide apparently turned late in camp. Held was fired up last week. Meanwhile, Nebraska coach Scott Frost said he was looking for a running back, "to come out of the pack and be the lead dog."

Based on what I've heard and seen this spring, a good bet to eventually emerge as the starter is true freshman Gabe Ervin. The 6-foot-1, 190-pounder from Georgia carried 12 times for 57 yards Saturday. He has a nice blend of power and speed. In the fourth quarter, he simply outran a safety to get around the edge for a gain of 13.

Yes, Ervin just arrived on campus a few months ago. But coaches this spring consistently praised his mature approach to practice and overall preparation. He quickly gained respect in the program.

Freshman Sevion Morrison, who missed last season because of injury and COVID-19, also looked strong Saturday in rushing eight times for 38 yards. He bursts into contact with authority. Same goes for freshman walk-on Jaquez Yant (6-foot, 245 pounds), who has excellent feet and runs with the sort of forward lean that causes headaches for defenders — both figuratively and literally.

Bottom line, Nebraska's running back position has to become a bigger factor in Frost's system. Held appears to have six or so young and capable running backs whom he hopes will fight hard for playing time — ideally as hard as Rocky Balboa against the big Russian.

If Nebraska fans were concerned about the position a couple of weeks ago, they probably feel a bit better now.

* You might've noticed that UNL chancellor Ronnie Green on Friday gave the lion's share of the credit to Matt Davison for the fundraising efforts that got the $155 million North Stadium expansion project off the ground.

It had to be a proud moment for Davison, a former Nebraska receiver great who's intensely loyal to the football program.

My guess is Davison's loyalty and passion for the program are evident to donors. He's also competitive as hell. That has to help.

The Tecumseh native comes from a relatively humble background. So does Frost. They're two men with deep roots in the state trying to get the program operating at a high level. Although the new facility guarantees nothing, it's an absolute necessity.

In terms of football facilities, Nebraska has slipped to the lower third of the conference. That simply won't fly.

Tip your cap to Davison, Nebraska's associate athletic director for football. It's seldom easy asking people for their hard-earned money.

* Maybe now people won't ask me what Davison actually does in his role. His mark on the program is now indelible. Think about that for a second.

Or maybe I should say "even more indelible." No, Matt, we haven't forgotten "The Catch."

* Of all the reasons you'll hear for Nebraska playing Fordham on Sept. 4, Frost wanting his team to get some early-season momentum — "wind under its wings," he says — stands above all. That's my read.

* Nebraska golfer Kate Smith winning the Big Ten championship resulted in a visit to the athletic director's office. "I told her, 'You're the kind of competitor we want here and will continue to recruit here,'" Bill Moos said. "I thanked her for all she did."

After Smith thanked Moos for his time, he told her, "I have nothing I'm going to do today or any day that's more important than what I'm doing right now."

NU ran the ball 54 combined times in the second half of the Red-White Spring Game once tackling went live. More on that, and a lot more in our notes.

'It all just clicked': Freshman LT Corcoran felt some bumps this spring, but also found his groove

Turner Corcoran echoes his position coach when he says he was "a little shaky" at first. Here's the story of how the process is shaping up.

While Nebraska's recent draft history isn't as rich as it once was, the Huskers continue to have success landing offensive linemen in the NFL.

The recommendations, made Thursday, include reducing the number of full-pads days of practice to nine and less contact sessions.

Big Ten champion Kate Smith shot a 74 and now leads all Husker golfers with a two-day total of 152, tied for 40th overall. 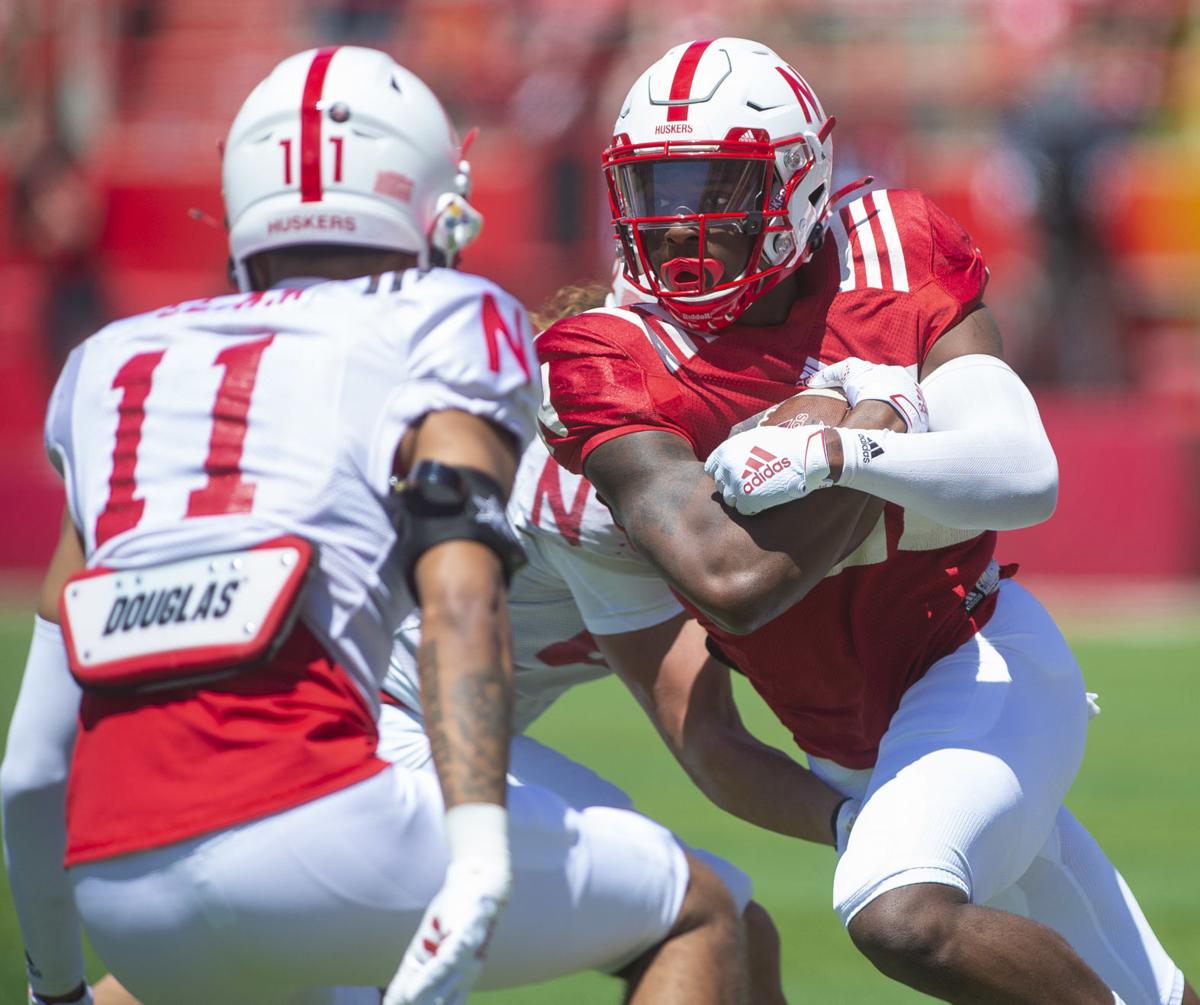 Red Team running back Gabe Ervin protects the ball as he's confronted by the White Team's Braxton Clark during the Red-White Spring Game on Saturday at Memorial Stadium. 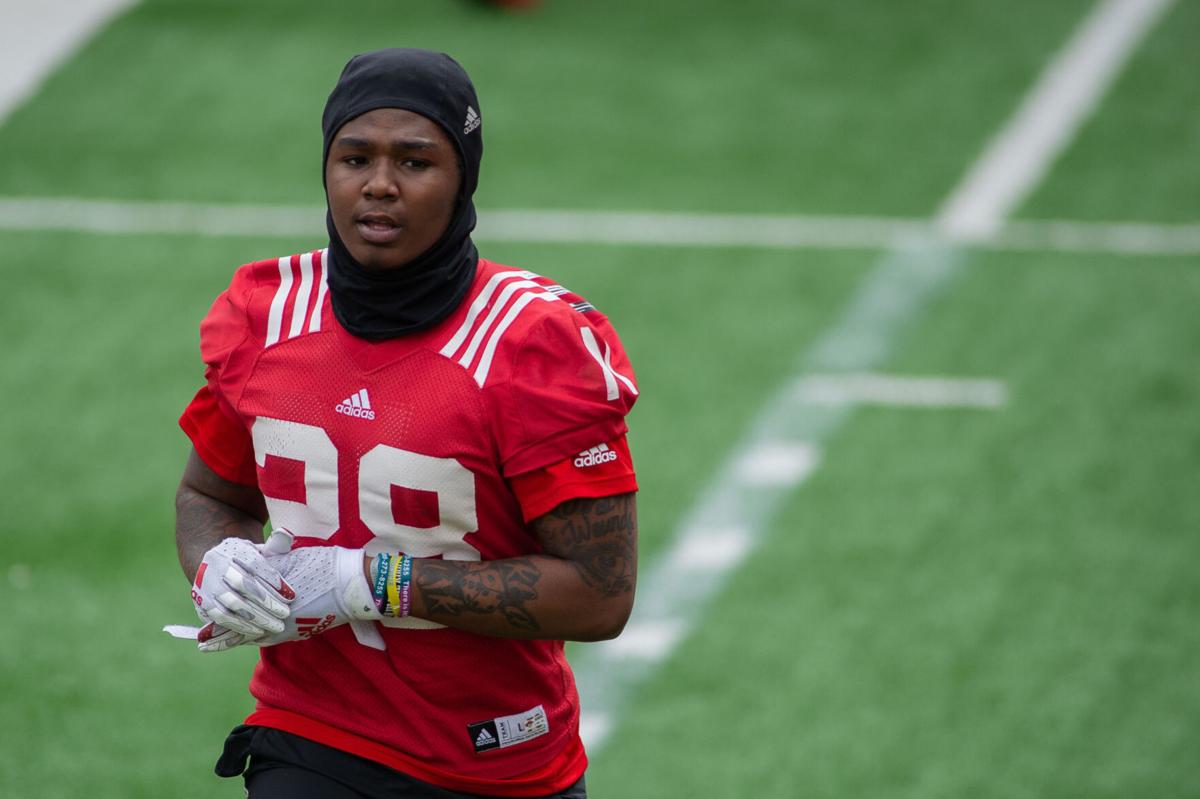 Freshman running back Sevion Morrison is seen on the sidelines during a Nebraska football practice April 17 at Memorial Stadium.