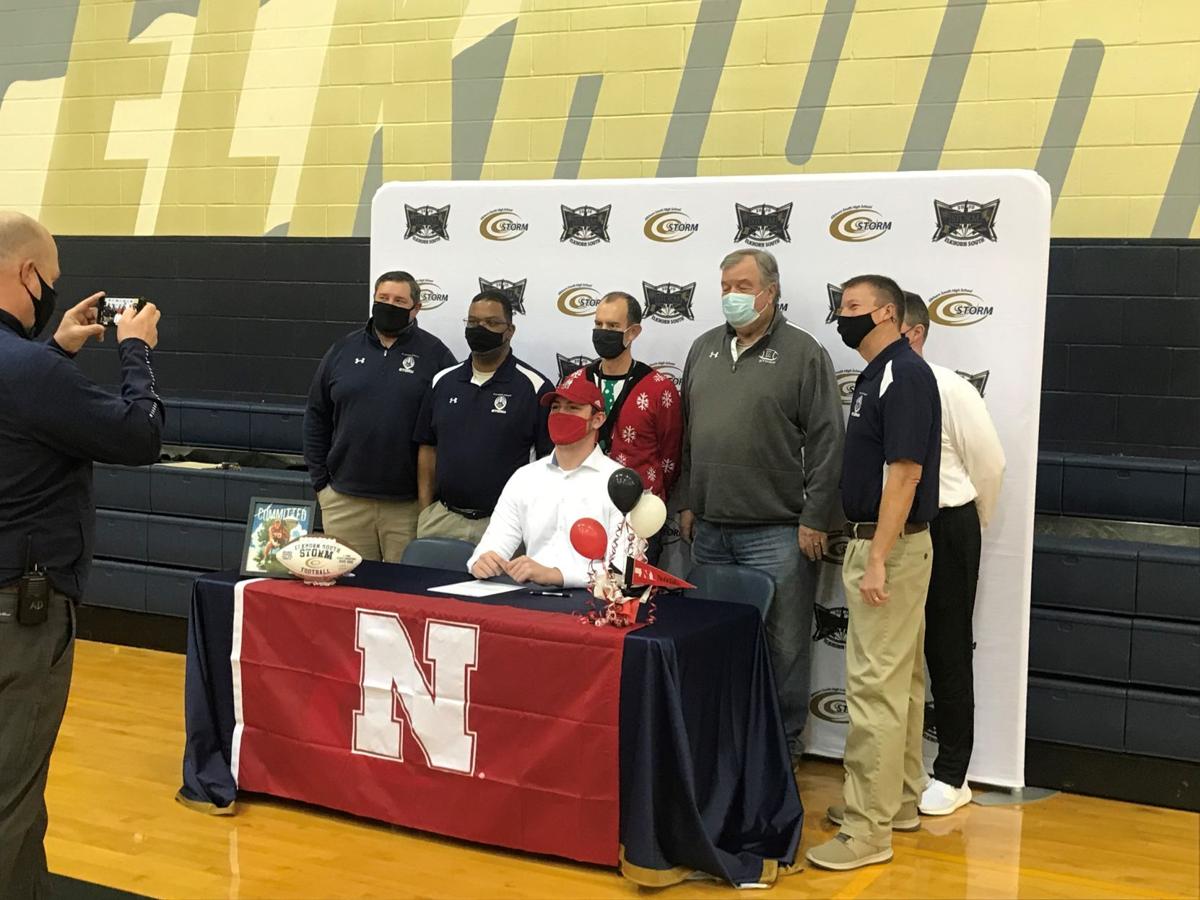 Teddy Prochazka is joined by his Elkhorn South football coaches as he signs his national letter of intent to play football for Nebraska on Wednesday morning in Omaha. He’ll start training with the Huskers in January. 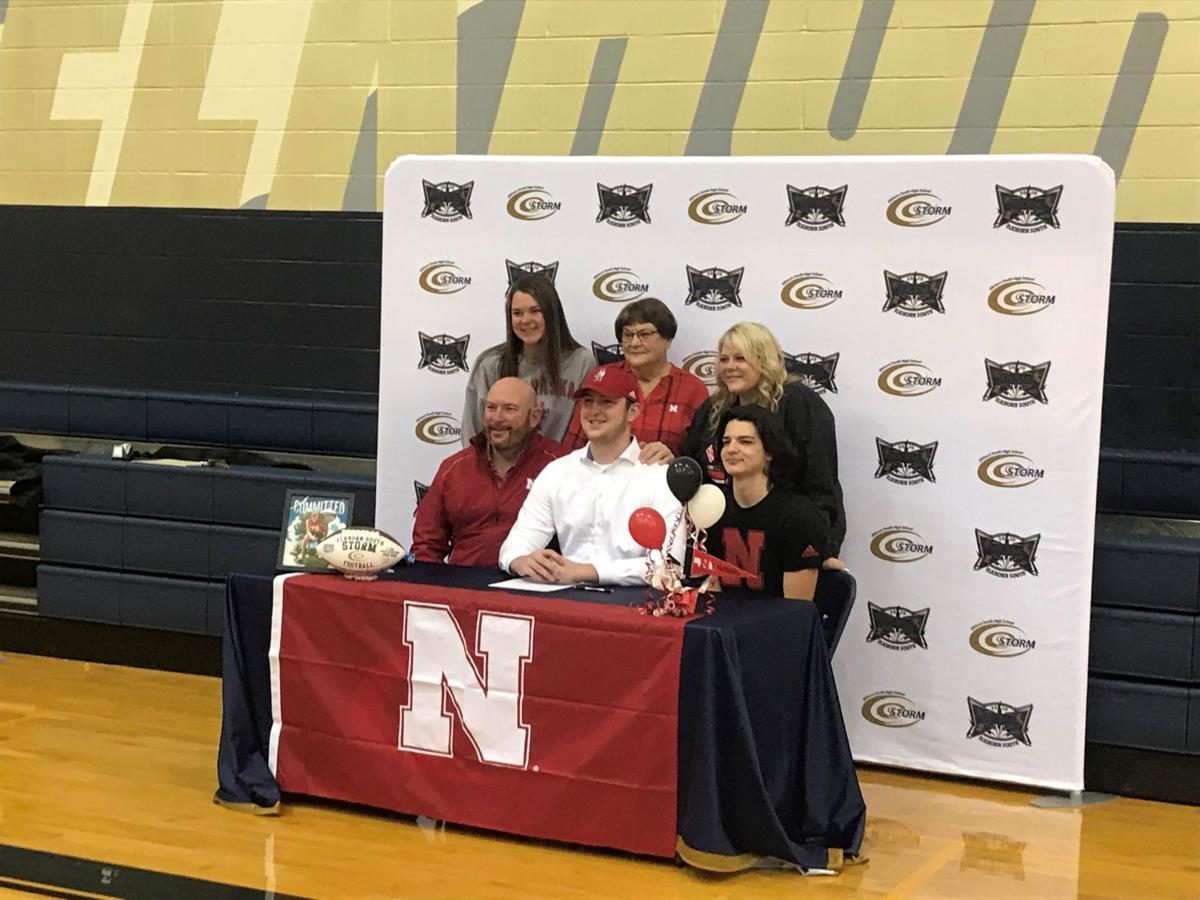 Teddy Prochazka is joined by his family in signing his national letter of intent to play football for Nebraska on Wednesday morning in Omaha. He’s a top-75 national recruit.

How patience, creativity and a lot of Zoom calls led to a by-the-book signing day for Huskers

2021 Husker recruiting board: Everything you need to know about Nebraska's National Signing Day

OMAHA — The 15 months since Teddy Prochazka committed to play college football for Nebraska at times moved slowly as he waited to join the Huskers.

Now, though, things are moving quickly. Prochazka, a top-75 national recruit from Elkhorn South, signed his national letter of intent at 7:45 a.m. Wednesday.

“He was just letting me know what’s going to happen now,” Prochazka said. “They send me the playbook tonight, and weightlifting schedule tonight. It’s going to move fast.”

Live updates: Huskers have signatures from all 19 high school players; Dickerson not signing with Gophers

'I want to be the best tight end to ever to go through Nebraska': Fidone not shying away from individual, team goals

Prochazka is graduating from high school early to start his college career. His final high school exam is Friday. He moves to Lincoln on Jan. 21, and starts college on Jan. 25.

Prochazka and Austin only spoke for a few moments. Prochazka needed to take a few more photos with some of his high school teammates.

But as he said goodbye, Prochazka told Austin, “I can’t wait to get down there.”

“Oh, dude, it’s something that when I knew early enrolling was an option, it was something I wanted to do right away,” Prochazka said. “Just to get there in their weight program and start learning the playbook. There are just so many advantages of going early, and I just can’t pass up on that opportunity.”

Prochazka wants to get to Lincoln and “start getting big.”

“I’m big now, but they’re going to put some nice muscle weight on me and make me be able to play football at the college level at a pretty heavy weight, and I can’t wait for it,” said Prochazka, a mountain of a man but a friendly sort who greeted all of the high school coaches who attended the signing day ceremony.

Nebraska was his first college offer, during his sophomore football season.

The Husker coaches sometimes take extra care when deciding when the time is right to offer a scholarship to a player from the state — that can be a big decision for both the player and NU coaches — but they didn’t hesitate with Prochazka.

Numerous other Big Ten programs made the trip to Omaha to recruit Prochazka. Some schools say they won’t offer a player until the player comes to a summer camp or visits the campus, or they see more game tape. But most schools offered Prochazka on the spot.

When Prochazka committed to the Huskers in September 2019, he was the first one on board for Nebraska’s recruiting class. Then he got to watch the rest of the class come together, including four more in-state scholarship signees.

“When I was the first one to commit it kind of set the tone for that class that we’re going to get in-state guys, and that was kind of the focus for this class, is we want to get some of the best in the state to come to Nebraska,” Prochazka said.

Prochazka is the No. 1 recruit in Nebraska in the senior class, according to Rivals.com. The Huskers got three of the top five (also James Carnie and Koby Bretz).

Cornerback Avante Dickerson from Omaha Westside is committed to Minnesota, but didn’t sign on Wednesday and will take more time to make his decision. The No. 3 recruit in the state, Keagan Johnson of Bellevue West, is going to Iowa.

If you haven't noticed, Nebraska's starting quarterbacks draw about as much scrutiny as the governor. The job's not for everyone.

Nebraska has put an emphasis on luring big, athletic offensive linemen. Take a trio that will sign Wednesday as an example.

Mark Waller spent 15 years coaching Lincoln North Star, and now gets a chance at a state title as an Elkhorn South assistant.

Future Husker with Teddy Prochazka: No. 1 recruit in state had Big Ten coaches flocking to Elkhorn

The four-star prospect had suitors offering on the spot during his sophomore year, which is the season his HS coach identifies as key in his development.

2021 Husker recruiting board: Everything you need to know about Nebraska's National Signing Day

Click on the photos for highlights, ratings, profiles and more on the Husker 2021 commits and targets.

Coaches appear to agree with Nebraska's growing belief that the Alabama native is ascending into one of the best CBs in the league.

Life in the Red: Here's what Husker senior TE Jack Stoll has to say about Thomas Fidone, freshmen

The Huskers made a recruiting push in August with Thomas Fidone and Koby Bretz. A.J. Rollins said, "‘Yeah, I’m going to jump on board, too.’"

Meyer is hopeful that he’ll eventually see time as Nebraska's kicker, and he can look to historical examples for inspiration.

'I feel like it’s a huge accomplishment': Nebraska's next scholarship eight-man player comes from just across the border

Nebraska football fans certainly love those stories, when a player from a small-town eight-man school makes it with the Huskers. Is Seth Malcom next?

If you're looking for Huskers-Rutgers talk amid flurries of National Signing Day content, you're in the right place.

On early enrollees: Scott Frost cracked a smile, “The way high schools are right now with COVID, I might be ready to get out of there, too.'"

Husker head coach Scott Frost was generally low key as he discussed NU's class of 2021 for a little more than 20 minutes on Zoom.

Nebraska's incoming 2021 WRs and TEs will stand out on campus — and in the Big Ten, that's ideal

Nebraska's coaches knew they had to get bigger to compete in the Big Ten — and not just on the offensive and defensive lines.

How patience, creativity and a lot of Zoom calls led to a by-the-book signing day for Huskers

Nebraska's 19 up, 19 down morning is a testament to the coaching staff, sure. But it's also a nod to how the players handled the unusual climate.

Teddy Prochazka is joined by his Elkhorn South football coaches as he signs his national letter of intent to play football for Nebraska on Wednesday morning in Omaha. He’ll start training with the Huskers in January.

Teddy Prochazka is joined by his family in signing his national letter of intent to play football for Nebraska on Wednesday morning in Omaha. He’s a top-75 national recruit. 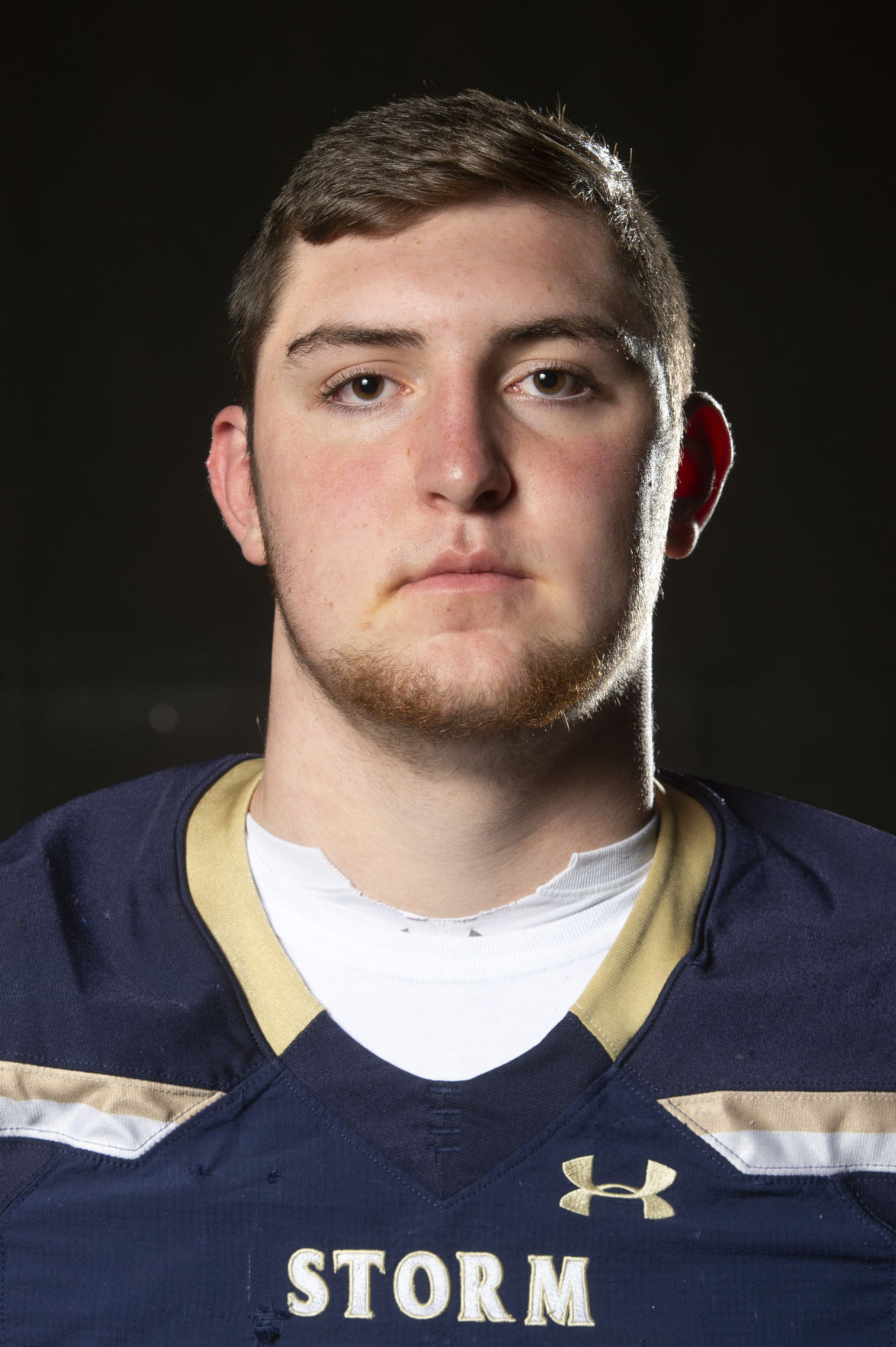