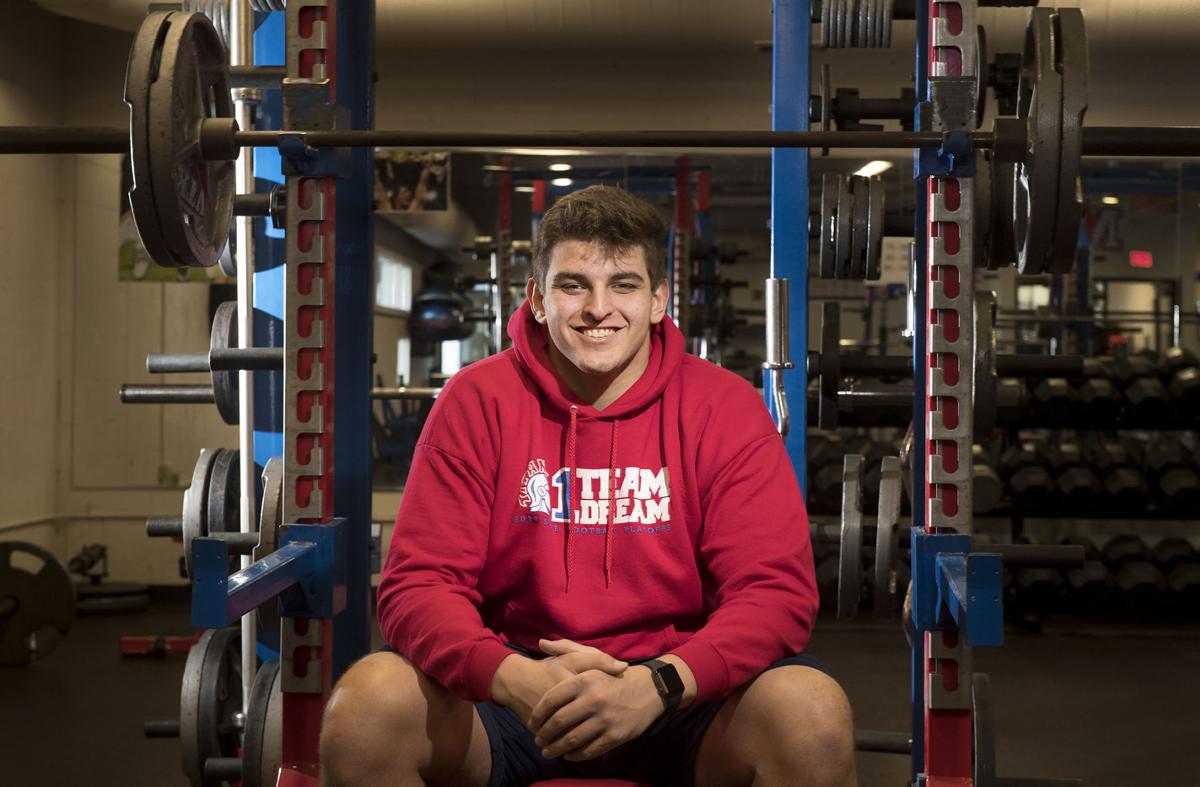 When Nouredin Nouili arrived in the United States on July 23, he had never lifted weights in his life.

The German national, born in Frankfurt, came here as an exchange student intent on having fun as a senior at Norris High and making the most of his time in Nebraska.

“I just wanted to see the culture and the tradition of Americans and also play sports like football and I’m doing wrestling right now and track,” Nouili told the Journal Star this week.

A funny thing happened along the way. Nouili, who played two seasons of football in Germany before coming to the United States, became a starter on the offensive and defensive lines for Norris. Not only that, but he was pretty good.

College interest started to percolate. He took an unofficial to Nebraska on a game day. Talk about an eye-opening experience.

“They kind of sized me up and they told me that my body frame could easily hold about 315 pounds and that they would want me at 315-320 and I would still have a lower body fat percentage than the average lineman who goes into the NFL Draft,” Nouili said.

So he figured he would at least check out some lower-division schools, visiting Doane, Emporia State, Northwest Missouri State and Fort Hays.

Then Nebraska offered him a walk-on spot, and shortly thereafter, he had scholarship offers from South Dakota State and North Dakota State, two of the premiere FCS programs in the country. He’d been in the country for six months. He played one year of Class B football.

While he was taking official visits to those schools, Colorado State offered him and he visited this week.

Extremely excited to announce that i received my first FBS offer from the university of Colorado state💪🏽💯 pic.twitter.com/u0DJ3OMDbP

To put it mildly, the situation escalated quickly.

When school started this summer, the idea of playing college football — heck, even staying in the United States for college at all — had never crossed his mind. Now he’s got an FBS scholarship offer to his name.

“I didn’t think any of this was going to happen,” he said. “Through the season, I got told, ‘Hey, you’re pretty good.’ Then the first unofficial to Nebraska was unbelievable. That was amazing because I thought, ‘This is crazy. They’re actually interested in me.’ That was the first time I started thinking about the ‘What if.’”

But the prospects of playing college here are complicated, particularly the feasibility of walking on at Nebraska.

“Most people here, they start saving money for their kid when they’re born for college,” Nouili said. “We didn’t because in Germany education is free. So money is a big part of it. I don’t know what I’m going to do.”

Just staying here for college is a big decision in its own right. Nouili admits his mom in Landau, Germany, isn’t crazy about the idea.

“Typical mom thing,” he says of being thousands of miles from home, adding, “She’s sad about that, of course, but she’s still really happy for me to be able to have this chance.”

A lot can happen in a few days, of course, especially with a recruitment that's exploded like Nouili's has. He tweeted Thursday that he plans to announce his commitment sometime next week. National Signing Day is Wednesday.

His host brother, Norris junior running back and linebacker Ashton Hausmann, drove him north for the visits to SDSU and NDSU. Some of the visits he's made by himself. His host dad has been in contact with recruiting folks at Nebraska as late as this week.

All in all, it’s been a crazy few months for Nebraska’s most interesting football recruit. There are late bloomers and then there’s Nouredin Nouili.

“I just wanted to have this experience and live with an American family and see how that is and the football part just played out perfect, I guess,” he said.

Nebraska athletic director Bill Moos says during a radio interview that he's staunchly against paying college student-athletes and talks the future of facilities projects at NU.

Life in the Red: Moos not concerned with, 'people who would rather sir the pot'

Moos on the radio: Men's basketball program evaluation will come after the season

Bill Moos says he'll evaluate the Nebraska men's basketball program after the season and won't interfere before then.

Husker Extra Podcast: How the Bill Moos situation unfolded and where Nebrasketball goes from here

The Huskers are hosting a large junior day gathering Saturday and are expected to have many priority-type prospects on campus this weekend for the first of what is expected to be multiple gatherings between now and the end of spring football.