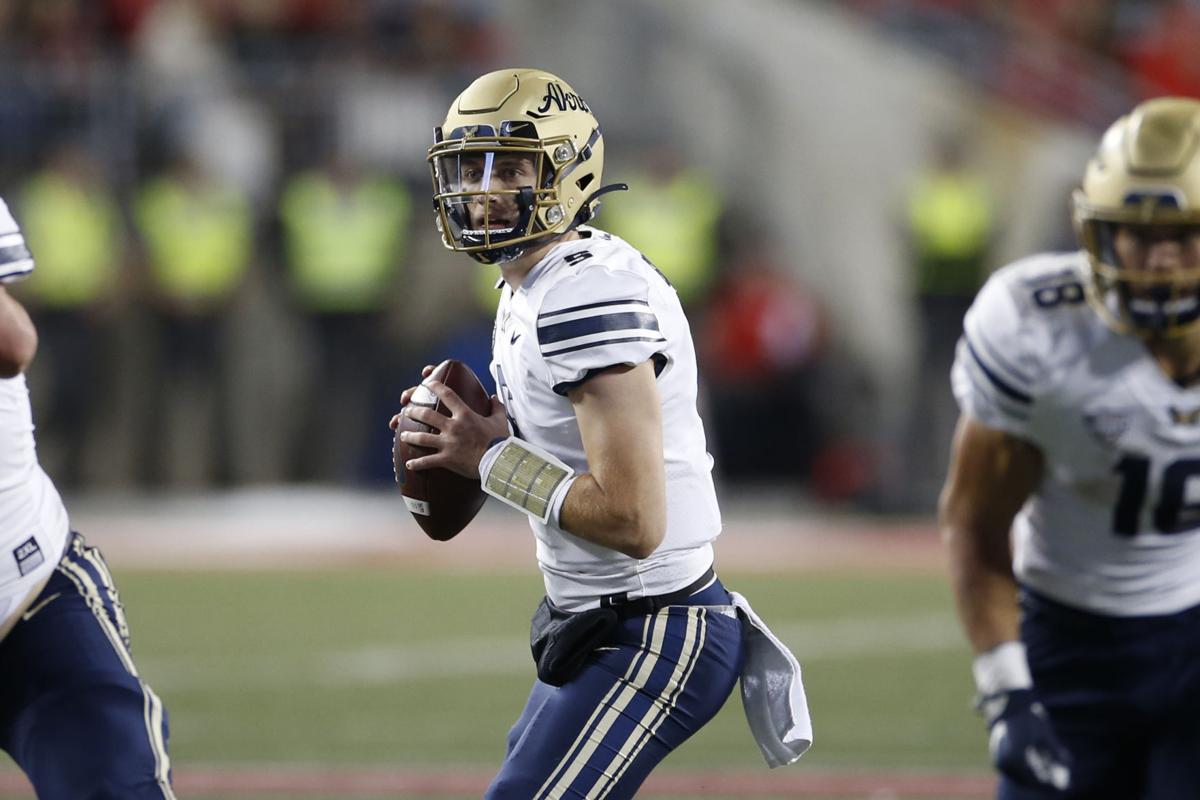 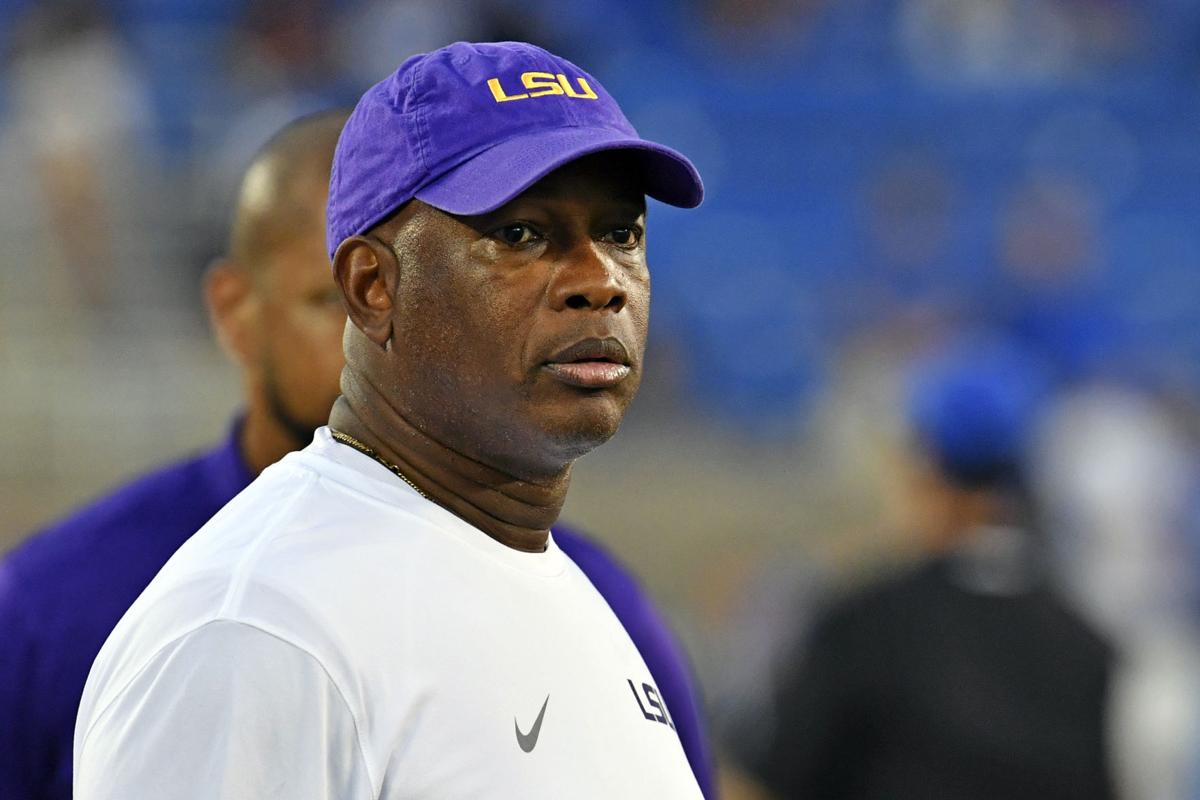 LSU wide receivers coach Mickey Joseph looks on before a game against Kentucky in October in Lexington, Ky.

Nebraska coaches will spend a significant portion of the time between now and Dec. 15's early signing period on the road recruiting and hosting players on visits back in Lincoln.

Here's the latest from Tuesday:

* Nebraska has a transfer quarterback coming to Lincoln on Friday for an official visit.

Former Akron signal-caller Zach Gibson confirmed to the Journal Star on Tuesday evening that he's arriving on campus on Friday for a weekend visit.

Gibson, listed at 6-foot-3 and 208 pounds, just finished his redshirt freshman season with the 2-10 Zips. He played in seven games and completed 69.4% of his 157 pass attempts for 1,262 yards, racking up 10 touchdowns without an interception.

Despite the gaudy numbers, Gibson was not the regular starter for Akron.

Gibson was a three-star recruit out of Johns Creek High in Georgia as part of the 2019 class and joined head coach Tom Arth at Akron. Arth was fired in the middle of the 2021 season.

Gibson is also planning on taking an official visit to Georgia Tech.

Joseph on the road: New Nebraska wide receivers coach Mickey Joseph hit the recruiting trail for the Huskers for the first time Tuesday.

The newly hired assistant had his contract finalized Friday and traveled to Lincoln, where the Huskers had official visitors on campus over the weekend, but Tuesday is his first full day out on the road.

He kicked it off with Frost in a familiar place: Louisiana.

Citizen is ranked the No. 58 player overall and the No. 2 running back in the country according to Rivals and is the No. 120 player overall per the 247Sports Composite. He has one official visit left to take and, of course, there is just one weekend remaining before the early signing date arrives on Dec. 15.

Nebraska offered Citizen a scholarship while in town.

It would be a major coup for the Huskers to get Citizen on campus this weekend, let alone get a commitment and signature from him, but it's a situation at least worth monitoring.

Elsewhere, Joseph also extended a scholarship offer to 2022 three-star wide receiver Decoldest Crawford (Shreveport, Louisiana) on Tuesday. Crawford, who is listed at 6-1 and 180, had been verbally committed to LSU since Oct. 28, 2019, but backed off his pledge hours after Nebraska extended the offer. Also getting an offer: Four-star receiver Shazz Preston (Saint James, Louisiana), a top-100 prospect in 2022 who was thought to be deciding between LSU and Alabama when Joseph left LSU.

Key DB visit: After spending the first part of the day in Louisiana, Frost was off to New Jersey, where it's expected he'll visit four-star defensive back Jaeden Gould (Oradell, New Jersey).

Gould, a 6-foot-2 cornerback, just wrapped up his official visit to Nebraska over the weekend. He attends Bergen Catholic High, which is the same school as Nebraska redshirt freshman running back Rahmir Johnson.

Here's the kicker(s): NU added not one, but two walk-on kickers to its mix this week.

On Tuesday, Blue Valley North kicker Charlie Weinrich of Stillwell, Kan., announced he intended to join the Huskers as a walk-on.

Weinrich has been on Nebraska's radar screen for a while even though he just was offered a walk-on spot in early November.

He is considered one of the top kicking prospects in the Midwest and picked the Huskers over some scholarship offers. He excelled at Nebraska's camp this summer.

At Blue Valley North, Weinrich hit a 57-yarder this fall.

On Monday, the Huskers added walk-on transfer Spencer Pankratz, who spent the 2020 season at Furman.

Pankratz went to high school at Valor Christian in Colorado, but was born in Lincoln. His dad played football at Hastings College.

Interestingly, Pankratz in 2020 was the backup to Timmy Bleekrode, a kicker and punter at Furman who is now in the transfer portal and is being recruited by Nebraska as well.

Pankratz thanked NU analyst Bill Busch and special teams graduate assistant Joey Connors for the walk-on offer. Busch is believed to have been on the road last week to visit Bleekrode, as well.

Frost has work left to do on staff hires, but OC candidates and an OL name emerge

Payne was essentially a rotation player in both of his years on campus, compiling 40 total tackles in his Husker career.

There's a relatively natural comparison that can be made, though it's a lofty one. That's one thought following Hartzog's commitment to NU.

Malcolm Hartzog packed a lot into the final week of his recruitment, which ends with a verbal commitment to the Huskers.

Johnny Rodgers was hospitalized Thanksgiving morning at the Nebraska Medical Center and was admitted to the intensive care unit a few days later.

A chain-link fence actually played a key role for Nebraska in 1987 when it signed ballyhooed QB recruit Mickey Joseph.

Twenty years removed from his Heisman Trophy-winning season, Crouch says "it's crazy to keep seeing some of the things keep coming in."

Donovan Raiola knows what Nebraska football is all about. He'll come to Lincoln to create a legacy. He'll come breathing fire. He's a Raiola. Say no more.

Three down, one to go: After finalizing deals with OC Whipple, OL coach Raiola, where does Frost go next?

The Huskers had coaches in Baton Rouge, Louisiana, to meet with former LSU quarterback Myles Brennan, who entered the transfer portal last month.

Huskers recruiting ticker: Visits shuffling as NSD approaches; in-state updates; a DB (back) on the radar?

The latest news, notes and information regarding Nebraska football recruiting.

Need to catch up on Nebraska's recruiting efforts before the early signing period next week? We've got you covered.

LSU wide receivers coach Mickey Joseph looks on before a game against Kentucky in October in Lexington, Ky.