Competition and fun, too, during a productive Warren Academy high school football showcase
View Comments
Share this
Return to homepage × 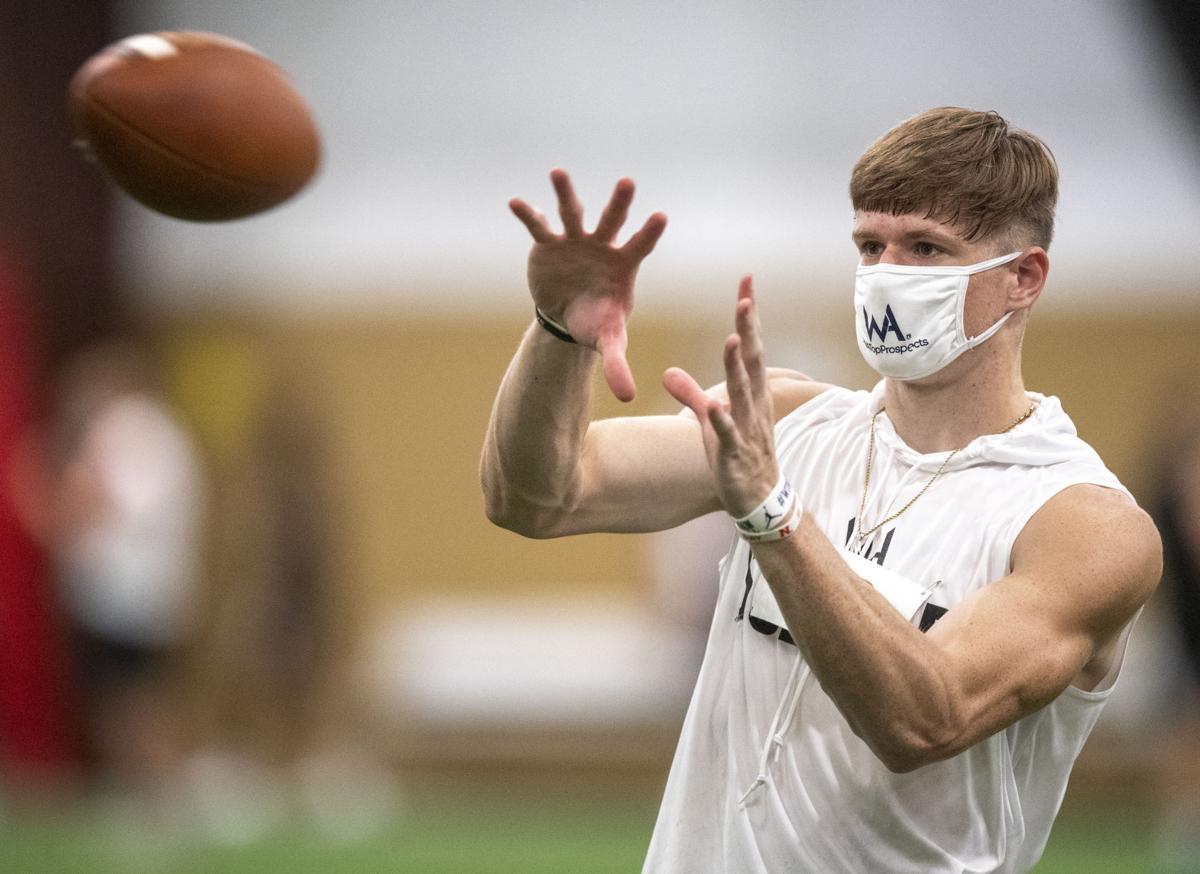 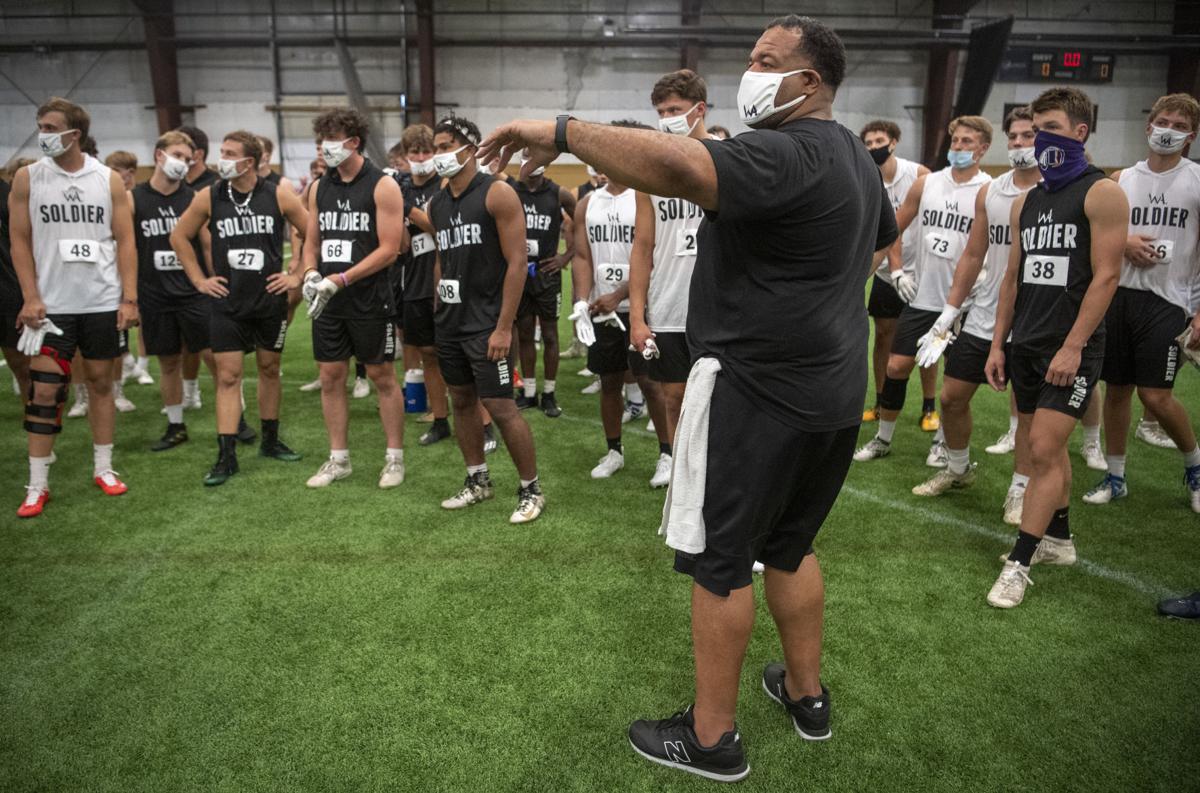 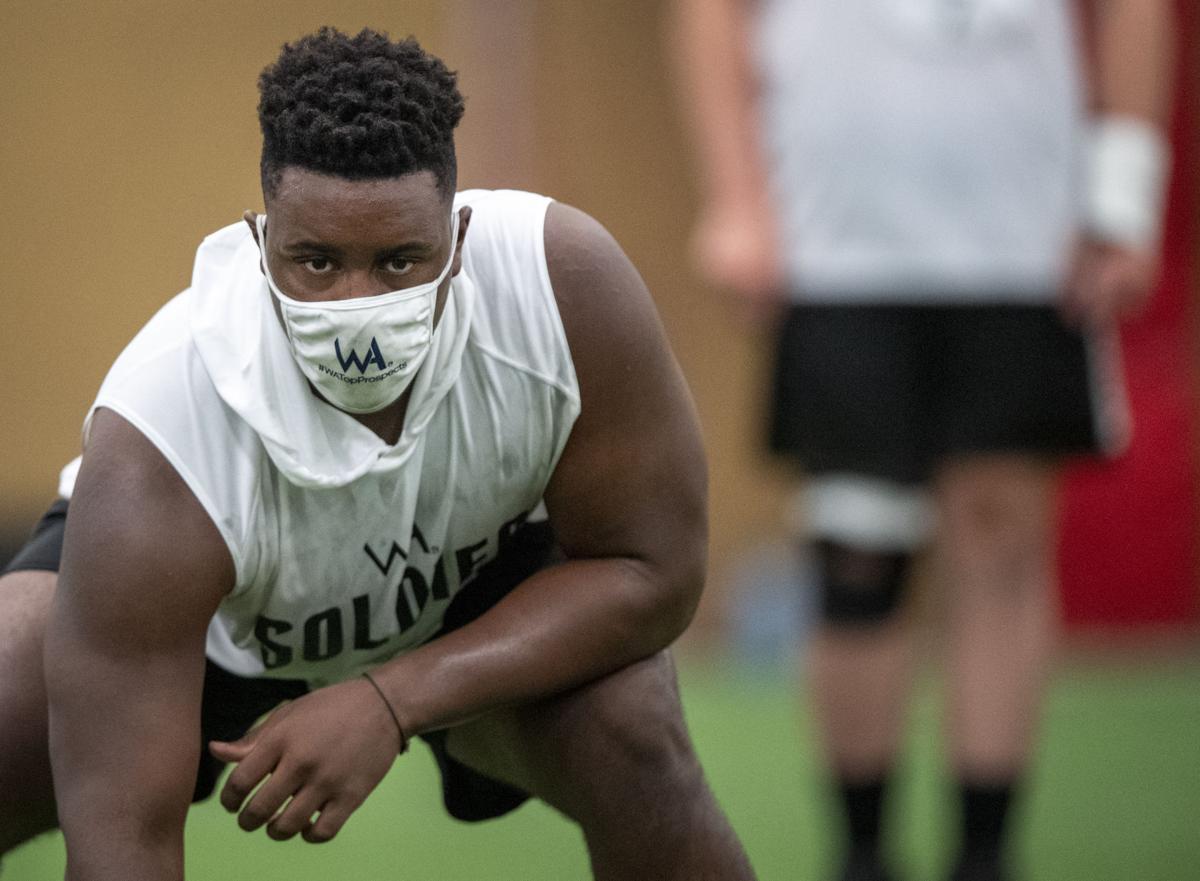 OMAHA — Thomas Fidone most certainly did not have to be here on a steamy Saturday in late July.

The four-star recruit, even in a most unusual offseason, has the attention of nearly every college football program in the country and scholarship offers from what seems like most of them. As a recruit, the Council Bluffs, Iowa, native and Lewis Central High standout doesn’t have anything left to prove on that front. He’s focused on a set of schools that includes Nebraska, LSU, Iowa and Michigan and has offers from a slew of other powerful programs.

Most of the time, guys in that position aren’t going to feel like they have to take part in camps ahead of their senior seasons.

And yet as he warmed up at the Omaha Sports Complex late in the morning to take part in the Warren Academy’s Top Prospects Showcase, run by former Nebraska defensive lineman Steve Warren, the top tight end recruit in the country for the 2021 class said there’s nowhere he’d rather be.

“Competition breeds excellence and that’s just how I was raised,” Fidone told the Journal Star. “I know (Lewis Central head coach Justin) Kammrad wants to see me compete and I want to compete. I want to do well and if I don’t, that’s OK. I want to learn from my mistakes. There’s no substitute for competition."

Fidone checked in at 6-foot-5 and 223 pounds, turned in 40-yard dash times of 4.64 and 4.63 seconds and dominated his chances in one-on-ones with a series of highlight-reel catches.

The field of more than 140 area players from the classes of 2021, 2022 and 2023 featured several players with Division I scholarship offers. The camp seemed to lift the spirits of many who were glad to just be out on the turf competing in agility drills and one-on-one positional competition.

“I wanted to just come out and have fun today,” said 2022 Omaha Central offensive lineman Deshawn Woods, a consensus four-star prospect and considered by 247Sports to be the No. 125 player overall in the country for his class. “I’m already ranked, nationally known by coaches, but I just wanted to have fun. Like, I met a bunch of kids from Elkhorn South that I never knew. I know (2021 Nebraska verbal commit Teddy Prochazka), but I’ve never known any of his teammates. So just knowing some kids from other schools, that helps a lot.”

Warren's been working on putting together this kind of event for three or four years. It just happened that this summer, with so much disrupted — including the NCAA’s recruiting calendar — by the coronavirus pandemic that it turned into a prime time to put a showcase together.

Participants and other attendees like media members and parents all had their temperatures taken and shown a list of COVID-19 symptoms, and masks were required for everybody in attendance. Overwhelmingly, the players kept their masks on even when doing drill work.

“The good thing is with the Warren Academy, we’ve done strength and conditioning, speed and agility drills and seven-on-seven now, so we’ve had all the measures in place,” Warren said. “All the coaches out here doing the drills help with (the other work) in some facet, so they really kind of understood what we needed. We have all the equipment and it’s something we’ve been doing every day anyway.”

For some players, the ability to get back on the field was all that mattered. Many others think the exposure and competition might help, too. Norris 2021 tight end James Carnie and Bellevue West 2022 tight end Kaden Helms, for example, would have been out on the camp circuit this summer trying to impress more colleges but instead have been mostly home because of the pandemic.

“It’s been a fun day,” said Helms, who initially planned to attend camps and workouts all over the country this spring and summer. “It’s pretty fun to go against some guys because all summer I was only able to go to one camp in Kansas.”

“I was super-excited because obviously there’s been no football camps this summer and I was kind of banking on those to maybe pull in some Power Five offers,” Carnie said. “This is perfect because it’s combine (and) one-on-ones, kids that you know and good competition.”

Carnie was one of the most impressive players of the day. He said in November he weighed 193 pounds and ran 5.1 seconds in the 40. On Saturday, the 6-5 Miami (Ohio) verbal pledge checked in at 222 pounds and clocked a 4.6-second 40. He’s been drawing Power Five attention, but it’s not hard to imagine that the verified weight gain and potential film from what he hopes is a full senior season could lead to more offers from the Power Five schools he keeps in touch with like Kansas State, Iowa State and Nebraska.

“Steve does a great job and this was great for everybody that was here,” Carnie said.

Warren had a similarly sunny outlook as the event rolled toward its conclusion early in the afternoon.

“As an athlete, former athlete, still an athlete at heart, I expect to win and when I woke up today, I expected us to win,” he said. “I feel like we’re winning right now as an organization.”

Defensive back Deontai Williams prides himself on being a big hitter — a role the Husker defense could really use.

On radio, Ruud says Nick Henrich is up 25 pounds and can be 'really, really good' for Huskers

Nick Henrich has now been healthy for a while, and that's a very good thing in the mind of Nebraska inside linebackers coach Barrett Ruud.

Nebraska moves into the next phase of its offseason, the Huskers are on a bit of a recruiting hot streak (that could continue) and the basketball team is moving forward with summer workouts.

Nebraska is set to begin two weeks of "minicamp" style practices and workouts on Friday, even though there's still much to be decided about a potential football season.

Robinson on preseason Hornung Award watchlist after finishing as 2019 finalist

NU sophomore Wan'Dale Robinson is on the preseason watchlist for the Paul Hornung Award.

Hickman’s stat sheet production last season was modest to say the least, but look for that to change dramatically in 2020.

Nebraska 2021 prospect Thomas Fidone would "love to feel out the campuses" but is prepared to make his decision even if that is not possible.

The four-star Class of 2022 offensive lineman already has offers from Nebraska, LSU, Florida, Texas A&M, Iowa and a slew of other schools.

A Lansing (Michigan) columnist writes that there's "no chance" of college football being played in 2020. But Nebraska's A.D. says otherwise.

The Big Ten, per sources, is more likely to move back than forward as fellow Power Five conferences aim for differing dates.