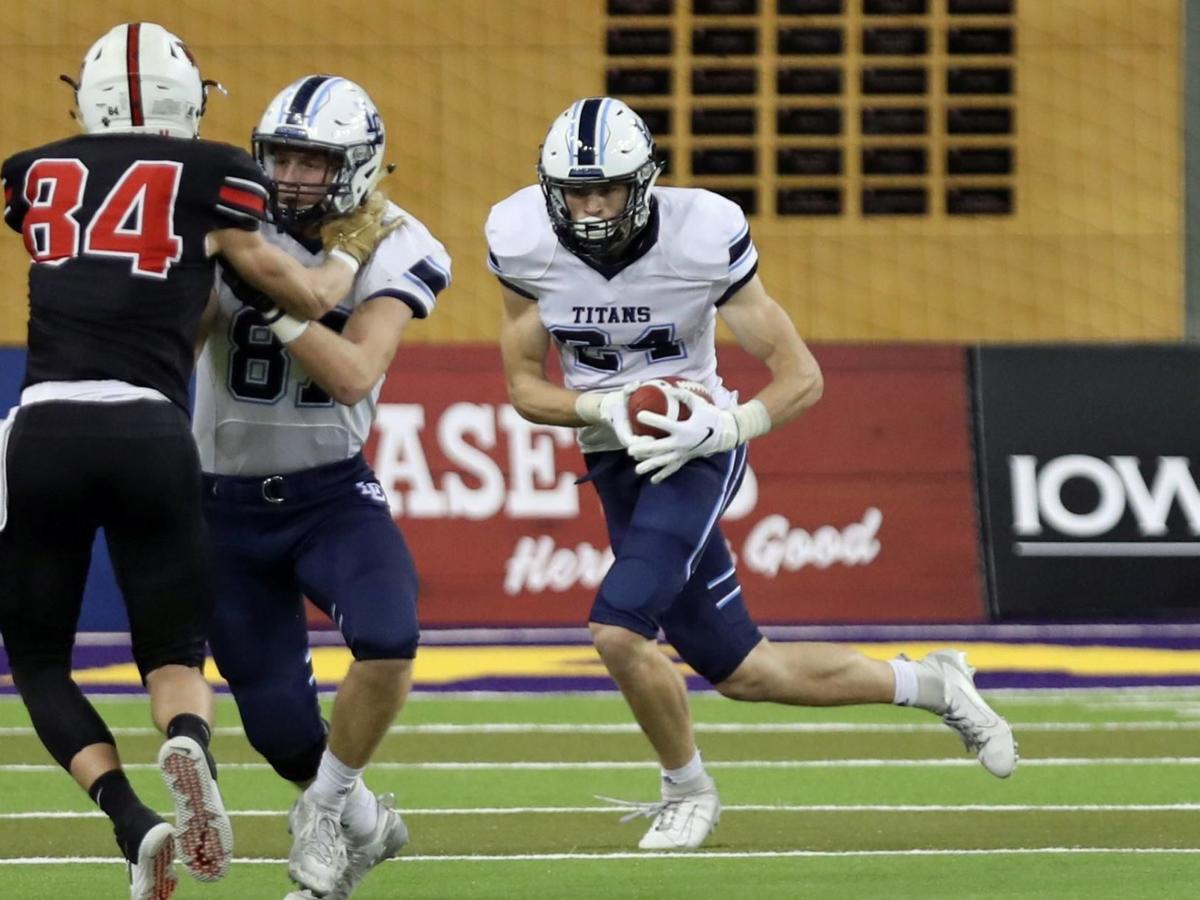 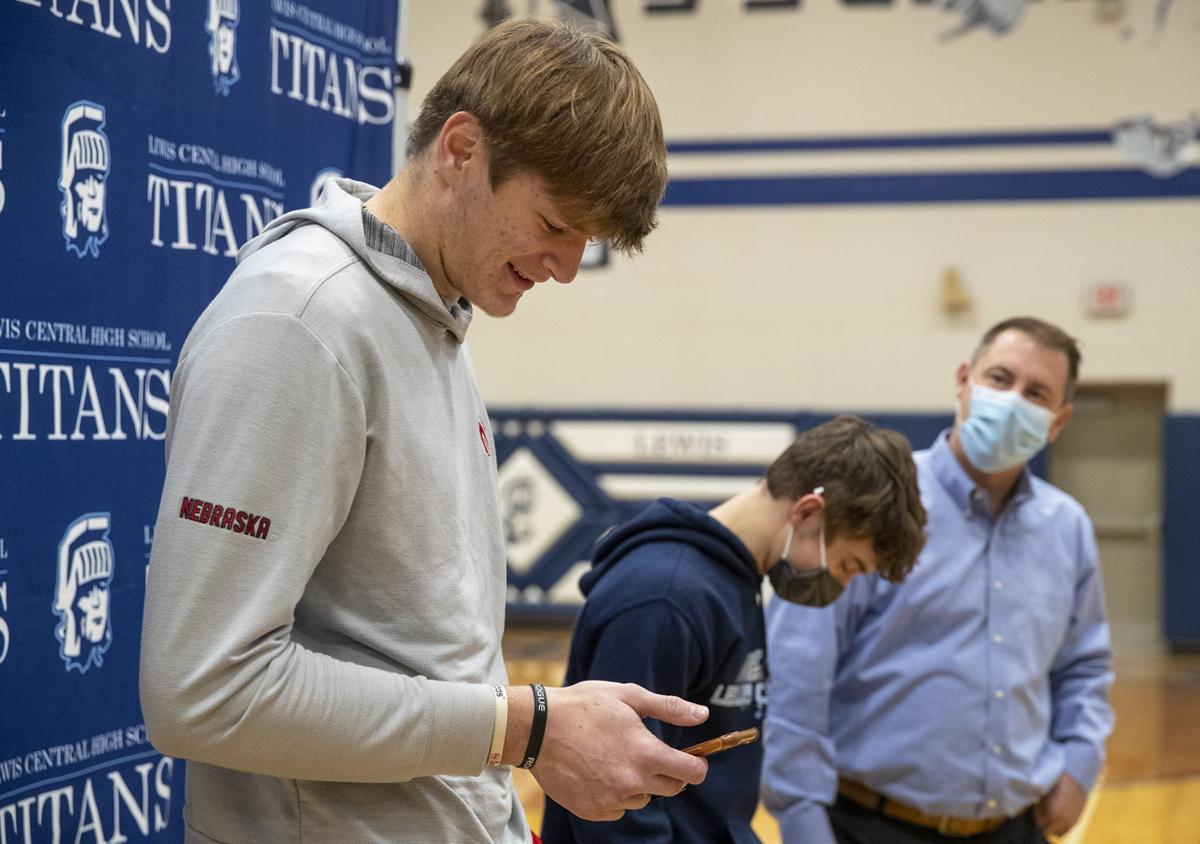 Lewis Central tight end Thomas Fidone has a FaceTime conversation with Nebraska head coach Scott Frost after signing his national letter of intent to play for the Huskers on Wednesday.

And after he signed his national letter of intent, the top-ranked recruit in Nebraska's 2021 class grabbed his phone and caught Nebraska coach Scott Frost and offensive coordinator Matt Lubick on FaceTime.

"Can we start teaching you the signals now?" the coaches asked Fidone.

'I was really impressed with the fight': Huskers overcome early gaffes, dominate Rutgers in second half

To bowl or not to bowl, that is (likely) the Huskers' next question to answer

So when Nebraska limped to a 1-4 start in an abbreviated Big Ten season, Fidone received text messages from other coaching staffs, checking to see if Fidone had second thoughts about his Husker commitment.

You sure you want to go there?

"Some would throw some shade at Nebraska, which is how recruiting goes, really," Fidone said moments after signing Wednesday. "Obviously I stayed 100% with Nebraska and I'm just ready to go there and turn things around."

Fidone, who caught 43 passes for 845 yards and 10 touchdowns as a senior at Lewis Central in Council Bluffs, Iowa, didn't waver. The thought of helping rebuild the Husker brand made him more pumped to get to Lincoln, and his relationships with Frost and Husker tight ends coach Sean Beckton were not like the others he had formed.

Said Thomas Fidone, "Obviously sometimes I was pretty scared, but I do see a lot of progress."

Now Fidone wants to be a part of progress.

The Fidones watched the Husker football games on television, and the 6-foot-5, 225-pound multi-sport standout talks about wanting to help get Frost's program on track.

He could have bailed after watching the Huskers lose 41-23 to Illinois or 26-20 to rival Iowa. He could have flipped to the No. 1 team in the country, a program built to contend for national championships for the foreseeable future.

Steven M. Sipple: NU can be very hard for fans to watch, but sometimes it's worth the pain

"Obviously, (Alabama is) a great school, but I'd rather be part of something turning around to be great than something (already) great, so I think it will be bigger once we start turning things around and start winning games," Fidone said.

Relationships played a key part in luring Fidone and keeping him.

Nebraska coaches stayed in constant contact with him during the recruiting process, even after he committed in late August. Fidone also gravitated toward Beckton, who also locked up commitments from in-state tight ends James Carnie of Norris and AJ Rollins of Creighton Prep.

"The relationship with Beckton was a lot different than with any other coach that I had," Fidone said. "I think Beckton is the guy who won't tell you what you want to hear. He'll tell you the truth."

Fidone's commitment was firm all fall, and if there was any doubt, he made known of his thoughts on the Huskers' 2021 class on Dec. 5, the same day Florida prep standout linebacker Patrick Payton decommitted from the class, and later signed with Florida State.

Fidone's father sees the passion his son has for Nebraska and football.

"Honestly, the love for the game, he just had that much drive," T.J. Fidone said. "The love, passion and the bonus of him playing for the Huskers is honestly a dream come true for our family."

Steven M. Sipple weighs in with his report card from the Huskers' performance vs. Rutgers.

With no McCaffrey spark available, Huskers rely heavily on Martinez, who shakes off mistakes

Adrian Martinez made some mistakes that surely had fans back home spitting out their Friday night drink of choice.

Dedrick Mills: "The more I ran the ball between the tackles the more they didn't want to hit me."

The Huskers wouldn't have won without the clamps applied by the Blackshirts on Friday night.

After 'long grind,' Huskers decide not to play in a bowl game

Nebraska’s football season is officially over.

Husker Extra Rewind: Putting a bow on Rutgers, plus some good, bad and ugly numbers from 2020

For the final time in 2020, we rewind the tape on the Huskers' win vs. Rutgers and also wrap up some good, bad and ugly numbers from NU's 3-5 season.

Steven M. Sipple: NU has several players who wanted to play in bowl, but 2020 has last word

It's easy to understand why Nebraska players chose to forgo a bowl, but we should keep in mind that many Huskers did want to play.

Lewis Central tight end Thomas Fidone has a FaceTime conversation with Nebraska head coach Scott Frost after signing his national letter of intent to play for the Huskers on Wednesday.