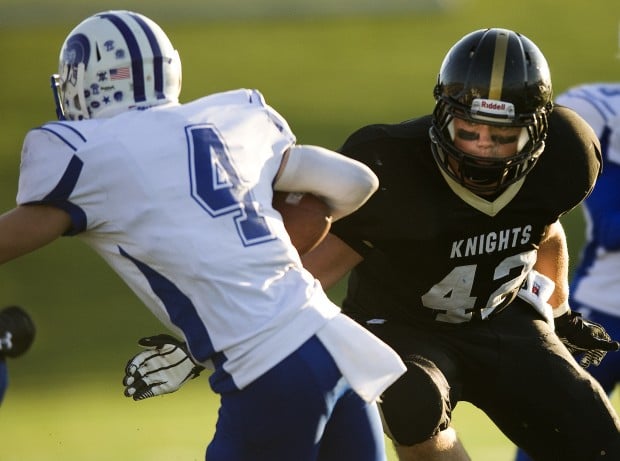 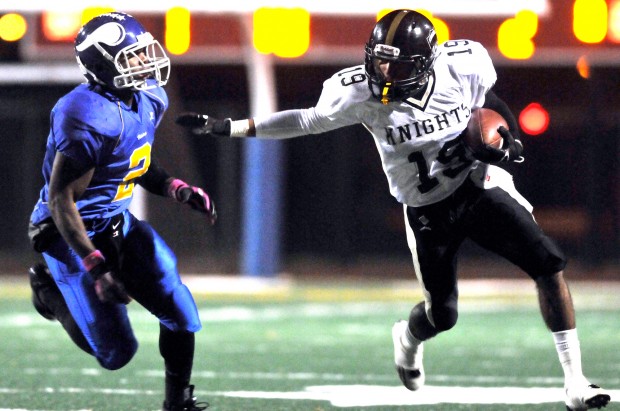 Lincoln Southeast's Desmond Robinson (right) runs with the ball while trying to avoid Omaha North's Donte Hill during a Class A state football quarterfinal on Nov. 2, 2012, at Kinnick Stadium in Omaha.

Jordan Ackerman and Landon Kubicek have a good idea of the gantlet they’ll be running at Nebraska.

The Lincoln Southeast seniors, who will be among the Husker football team's preferred walk-ons next fall, faced some of the current Huskers on a daily basis.

“I went up against David Sutton two years ago and Sam Cotton and Trey Foster last year,” Ackerman said. All four played tight end and defensive end for the Knights, and the three Huskers are now tight ends. “When I was first in the program, if it looked like I had to go up against one of them, I’d ask if someone wanted to trade sides with me.”

“I wasn’t super-afraid to go against them, although the size difference was a little threatening,” Ackerman said. “After a stand-up, I realized what I did wrong. That’s where you stand straight up and get obliterated.”

“He put in a ton of hard work. He played behind two all-state players in Trey and Sam, and he lived up to the expectations and was a great defensive end for us,” Gottula said. “He has the size you want at 6-foot-4, 245 pounds, and he also runs really well.”

“As a freshman going against Jake, I didn’t know how I would ever compete with guys like him,” Kubicek said. “But by the time I was a sophomore and junior, I started to realize I could play with them.”

There will be an air of familiarity for some of the other walk-ons. Erik Evans of Waverly will be joining his brother, Tyler. Dustin Glaser of Flower Mound, Texas, certainly has heard stories about Nebraska football from his father, Doug, a former NU captain. LSE receiver Desmond Robinson will join his Southeast teammates walking on. Norfolk Catholic teammates Jordan Bellar and Connor Ketter will come to Lincoln.

Ackerman said his teammates always were there to help him.

“I’m good friends with all of them and I also threw in track with Trey, so he and I got really close,” he said. “I learned a bunch of little things from him, technique things like footwork, position, how to put your body in certain ways to make blocks.

“When I went against Sam, he was so lengthy compared to me and Trey was so quick with his hands. I learned how to play against them.”

Ackerman, who is playing on the Knight basketball team, said instead of shedding weight, he has gained 15 pounds.

“That’s insane because I’m eating less and I lift all the time,” he said. “Playing post, I don’t have to worry about my shooting technique.”

Both Kubicek and Robinson had their senior seasons interrupted by injuries. Kubicek broke his foot the first game of the season and sat out six weeks. Robinson missed three games with a high ankle sprain.

“It didn’t go exactly as planned, but it worked out,” Kubicek said. “Ever since I was a kid, I wanted to play at Nebraska. It’s hard to turn down money from other schools, but this really turned out to be the best offer.”

“I had a scholarship to North Dakota, but that’s a long way from home, and it seemed like this would actually work out better for me,” he said.

Gottula said Robinson and Kubicek have skills that will help them at Nebraska.

“Desmond turned out to be the leading receiver in the history of Southeast football. He has great speed and the ability to stretch the defense,” Gottula said. “I think his kick-returning skills will also help him.

“Landon is young for his class and will continue to mature. He’s an extremely hard worker and has great pass-pro technique.”

Kevin Maurice's sister, Kendra Maurice, was murdered by an estranged boyfriend during Kevin's freshman year at Freedom High School in Orlando, Fla. Already the "man of the house", the defensive tackle continued to excel on the field and in the classroom, Steven M. Sipple writes.

Senior Jake Long, the bell cow of the Nebraska tight ends, is sidelined indefinitely with an injury.

Super-State captains Isaac Aakre of Millard North and Josh Banderas of Lincoln Southwest both took on heavier workloads for their teams this season and still kept producing.

Josh Banderas was asked to carry a heavy load this fall as the leader of the Lincoln Southwest defense and the team's top running back. So far, the All-American linebacker has handled it just fine for the Silver Hawks.

Lincoln Southeast's Desmond Robinson (right) runs with the ball while trying to avoid Omaha North's Donte Hill during a Class A state football quarterfinal on Nov. 2, 2012, at Kinnick Stadium in Omaha.