The effects of the coronavirus pandemic on Nebraska Athletics' budget is beginning to take shape.

Athletic director Bill Moos announced in a Friday news release that his department is reducing expenses by approximately 10% for the 2021 fiscal year, which begins July 1. That percentage will likely mean a cut of well more than $10 million, based on the latest available data.

The budget reduction is set to include a 10% cut to Nebraska athletic administration positions departmentwide and a freeze on increases to sports program budgets and on merit raises for all NU athletics employees.

In addition, travel and recurring capital project expenditures will be limited, administrative budgets will be reduced by 10% and sports programs are "encouraged to build a more regional nonconference schedule, which will limit public exposures and allow for a reduction in travel costs."

Recruiting-related travel will not be subject to the cuts, likely because it is largely funded by private donations.

“In our deliberate planning for how to best address a decline in expected revenue, we attempted to institute measures that would minimize the impact on the student-athlete experience,” Moos said in the release. “While many of these necessary changes are difficult, especially those impacting our employees, we hope that they will be the only ones necessary in the months ahead. I am confident that we will weather the storm and come out stronger on the other side.

“I want to acknowledge the work and commitment of those employees who will no longer be with us and thank them for their service to Nebraska. We wish them all of the best in their future endeavors.”

In fiscal 2019, the department's operating expenses came to more than $124 million, with about $54 million attributed to three categories named "support staff/administrative compensation, benefits and bonuses paid by the University and related entities" ($27.3 million); "direct overhead and administrative expenses" ($19.5 million); and "other administrative expenses" ($7.3 million). Fiscal 2020 wraps up at the end of the month, so those numbers have not yet been finalized.

It is unclear exactly how many jobs will be affected. NU's athletic directory includes more than 425 people, but some are not full-time employees and many are coaches in NU's 24 varsity sports, which would not fall under administrative cuts. Moos has said in the past that he has about 350 full-time employees in the department.

The athletic department's statement comes on the same day that NU President Ted Carter announced a plan to cut $43 million from the University of Nebraska budget over three years.

An athletic department spokesman confirmed to the Journal Star that conversations with the people affected by staff cuts had already taken place. The school does not plan on publicly disclosing which positions were affected, how much notice affected employees were given or other details around the cuts. School officials do not plan on commenting further on Friday.

In April, Moos expressed confidence in NU's ability to handle what he knew at the time would be a turbulent period because of the pandemic's economic toll. Then, as now, it's not clear what the price tag will end up being.

But not even a robust reserve fund, strong support from boosters and a picture of financial health that few Power Conference schools can match — NU is the only such institution with no debt obligations and normally operates well into the black — could hold off the measures announced Friday.

Consider, too, that Nebraska's football program turned a nearly $60 million profit in fiscal 2019, and the athletic department gave more than $10 million of its operating profit to UNL for scholarships and other programs despite being less reliant than in recent years on Nebraska Foundation donations to cover operating expenses.

Last month, Moos relayed a message he gave his staff about the effects of the pandemic.

"When all of this is over, when the dust settles, we will be judged on how we navigated through this crisis far more than how many championships we win. That's how serious it is," he said.

Ahead of the Friday announcement, on Thursday the head coaches of NU's two most prominent programs — football's Scott Frost and men's basketball's Fred Hoiberg — announced they planned to donate a yet-to-be-determined portion of their salaries back to the athletic department to use toward its operating budget in fiscal 2021.

On the nonconference scheduling front, it is unclear how much the directive to take a more regional approach will affect football. While some sports build their schedules on a year-to-year basis, football has its nonconference schedules set well into the future. In fact, NU has just two openings between 2020 and 2027 and none before 2024. Each of those agreements has buyout language about what it would take to cancel games. Other sports, though, particularly baseball, spend a considerable amount of the nonconference schedule playing away from Lincoln.

Weights and COVID-19-cleared wristbands, an inside look at the Nebraska volleyball team's return to work

Nebraska volleyball player Hayley Densberger shares details of the process the players go through each day to be cleared to workout.

Scott Frost says a shortened spring "sets you back as far as knowing X's and O's" but is pleased with how the team has handled the return to campus.

After spending one season at Hutchinson (Kansas) Community College, Luke Sartori announced his commitment to the Nebraska baseball program Saturday.

"Looking back, I think what happened in 2003 changed the trajectory of Nebraska football forever," Marvin Sanders says.

How Nebraska fares in 2020 could be largely dependent on how many players in the 2019 class have strong seasons.

Luke Sartori put the finishing touches on realizing his childhood dream Saturday. That's when told Will Bolt he was joining the Huskers.

The Blackshirts are quieter this offseason than, say, the offense or special teams. Here's what we know — and what we need to find out.

After 40 years, Husker Power pioneer Boyd Epley is retiring — for the second time

The 73-year-old worked at NU for 40 years total and is considered one of the most influential people in athletics strength training.

Ervin's high school coach: "He has no problem running you over, but he has the speed to run away from you."

As the University of Nebraska prepares for an estimated $43 million in cuts expected over the next three years, the university system's budget…

Moving a portion of games to a larger Pinnacle Bank Arena, and regionalizing the schedule are among the steps the Huskers could be taking.

It does not appear that any of athletic director Bill Moos' senior staff — a group of eight deputy and executive or senior associate ADs — were affected by the cuts.

College players must decide whether to enter the NBA Draft or return to school by Aug. 3. Here's a look at where Big Ten teams stand.

Ted Carter to be installed as NU president on Friday

All Nebraskans are invited to watch the installation via livestream. 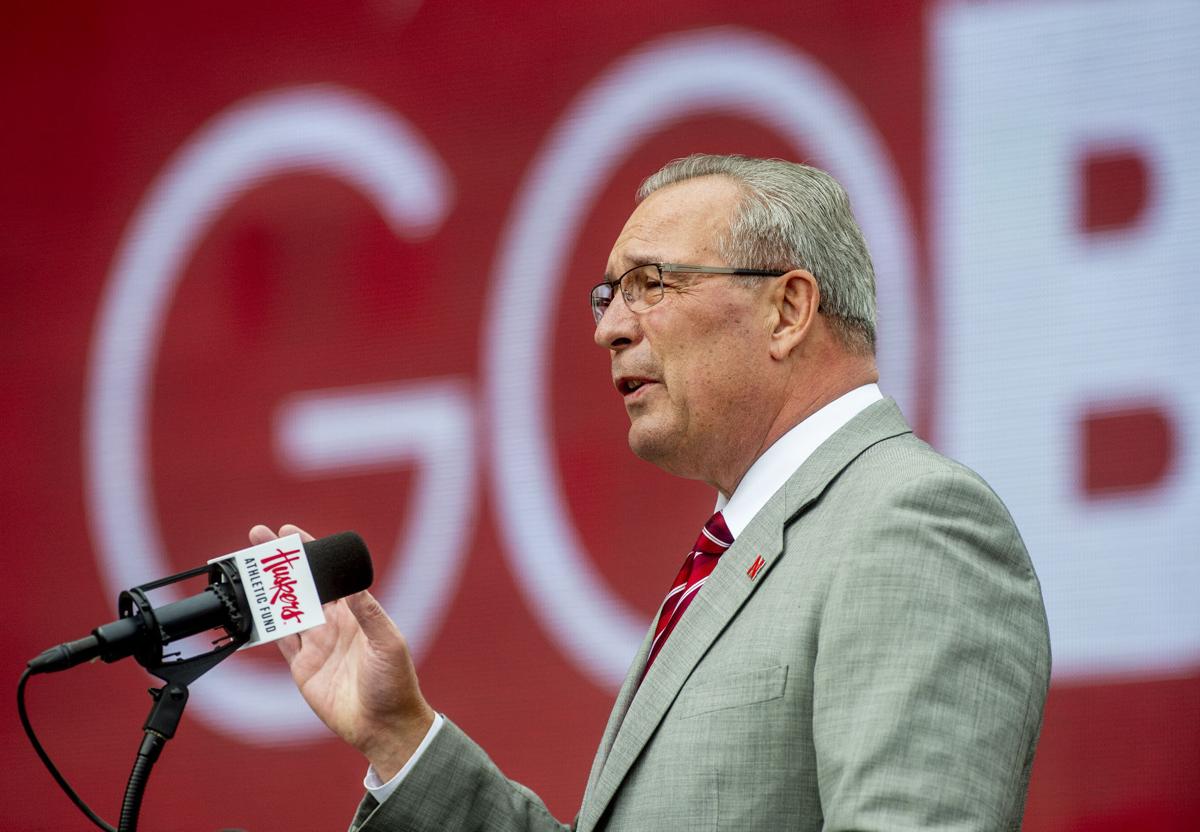 Nebraska athletic director Bill Moos addresses the crowd assembled for the announcement of the Huskers' new football facility in September 2019 at the East Stadium Plaza.