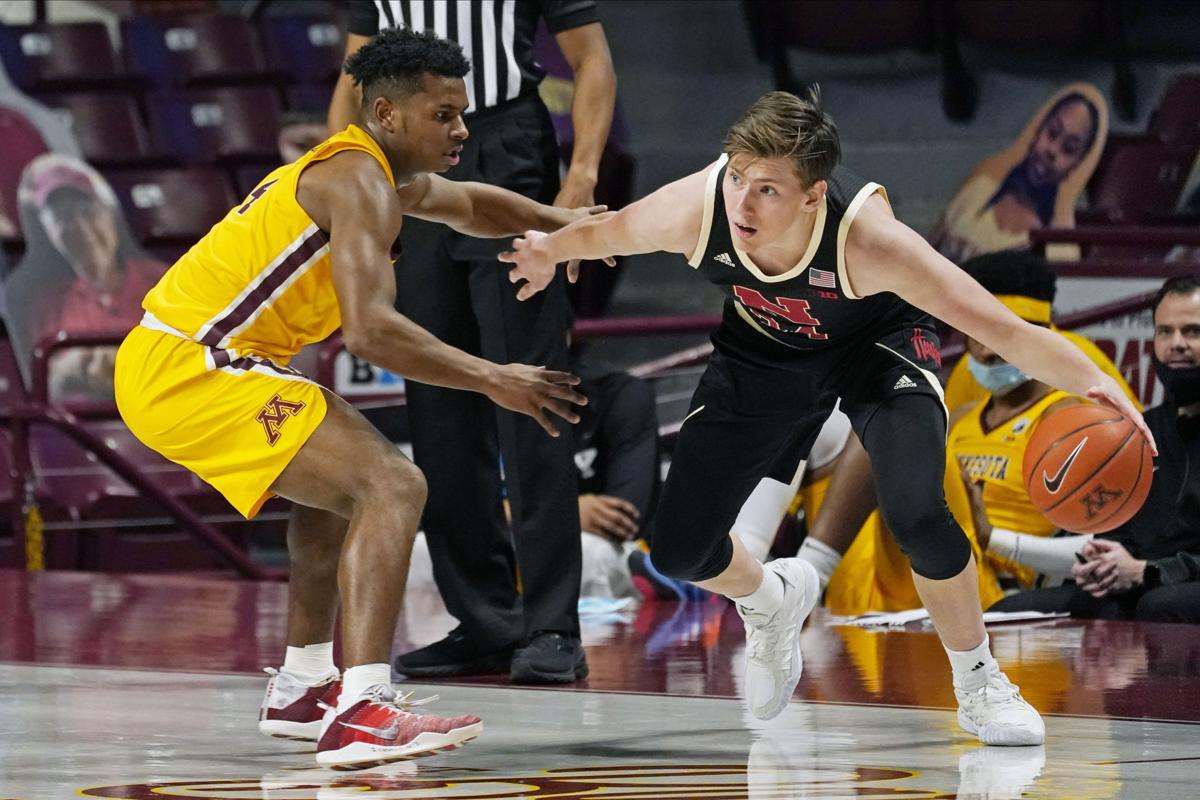 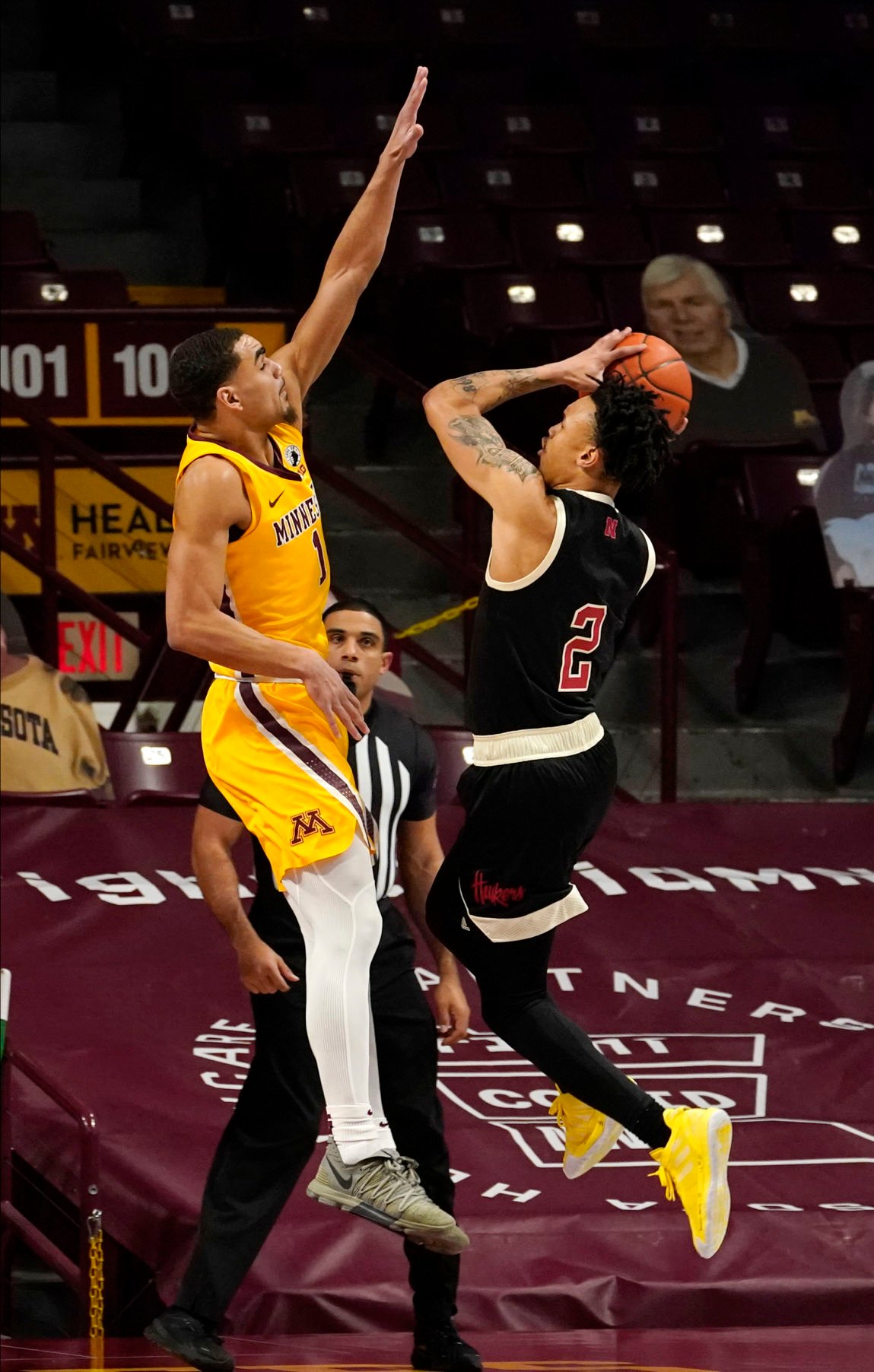 Nebraska's Trey McGowens (2) shoots over Minnesota's Tre' Williams (1) in the first half Monday in Minneapolis.

And Minnesota won the game 79-61 Monday night as Nebraska’s offensive struggles continued in its second game back from a COVID-19 pause.

The Huskers (4-10, 0-7 Big Ten) never led while dropping their 24th straight game against Big Ten competition. This one came with leading scorer Teddy Allen on the bench because of what NU head man Fred Hoiberg called a coach's decision.

Next step in Husker hoops' reintroduction comes Monday at Minnesota

"We'll move past it. We'll reevaluate everything again tomorrow when we get back to Lincoln and meet as a staff and put our prep together about how we're going to move forward against Wisconsin," Hoiberg said. "Those guys will come in and stretch, but we're not going to be able to do much tomorrow.

"So we'll see how things develop with shootaround and make the decision moving forward on what our rotation is going to look like."

Transfer forward Trevor Lakes replaced Allen in the starting lineup. It was Lakes' first appearance since Jan. 2 and just his sixth appearance of the season. He played just five minutes.

Allen, who leads NU with 17.2 points per game, scored three points on 1-for-10 shooting Saturday against Michigan State.

Minnesota’s hot start — the Gophers hit nine of their first 13 shots — provided enough of a cushion to overcome a stunning display of offensive ineptitude in the second half.

"I thought early they were too comfortable. They got off to an unbelievable start, made shots, but I think a lot of that had to do with, our grit just wasn't there," Hoiberg said. "Second half we were really good (on defense), but it was too late. I'd love to see us right there, and then go on one of those runs where we can open up a double-digit lead on our end."

After Gabe Kalscheur’s three-pointer gave Minnesota (12-7, 5-7) a 19-point lead, the Gophers proceeded to miss a whopping 17 consecutive shots and 19-of-20 in a six-minute stretch.

With both leading scorer Marcus Carr and second-leading scorer Liam Robbins glued to the bench with major foul trouble, Minnesota struggled to generate much of anything against a Nebraska zone defense that featured scarcely used freshman Eduardo Andre in the middle.

But Nebraska was only able to get within seven points before Carr and Robbins returned down the stretch to extend the lead again.

Two days after going 3-for-17 from three-point range against Michigan State, the Huskers were just 3-of-14 against the Gophers.

All three makes came from Lat Mayen, and all three came in the second half as NU went 0-for-8 from long range in the first half.

Mayen tied his career-high with 15 points and added six rebounds. His three-pointer with 15:37 left in the game was Nebraska’s first made shot from outside the paint.

More critically, Nebraska committed 18 turnovers one game after having 17 against Michigan State.

"And they're mostly careless. Effort ones, fine, I'm OK with that if it's an effort turnover," Hoiberg said. "But it's just mindless, mental mistakes that we need to correct. ... If you have a negative assist-to-turnover ratio like we have, it's tough to win."

Shamiel Stevenson scored 14 points for NU and was the only other Husker in double figures. He and Mayen combined to go 10-for-19 from the field while their teammates combined to shoot 11-for-38.

Carr finished with 21 points and eight assists to lead Minnesota. The Gophers outscored NU by 23 points when he was on the floor.

Nebraska shot 37% from the field and missed nine more free throws one game after shooting 36% and missing 13 foul shots against Michigan State.

Back to action against Michigan State, Husker hoops will see where it stands coming out of COVID-19 shutdown

Nebraska will face the prospect of an NBA-like schedule this month as it returns to action.

Fred Hoiberg: "Right now it's not worth it to me to have extra risk involved with guys that are in high-risk categories."

'There's no textbook on how to do this': Pietig helps lead Husker hoops in fight against COVID-19

Things are about to get wild with schedule shuffling already happening and more on the way as first Nebraska, and soon Michigan, return from pauses.

Fred Hoiberg: "I'd love to have two days. We're going to have to take an off day tomorrow, which is ridiculous, but it is what it is."

'It's deflating': Another dud on offense as Huskers fall to No. 21 Wisconsin

NU scored 22 points in the first 10 minutes and built a nine-point lead. "And then we just stopped doing what was leading to success on the floor."

He played just 10 minutes and picked up five fouls.

Back in action. Chris Basnett previews the Huskers' home game against No. 6 Illinois.

Nebraska's Trey McGowens (2) shoots over Minnesota's Tre' Williams (1) in the first half Monday in Minneapolis.