This is where things stand with the Nebraska men's basketball team one-fourth of the way through its Big Ten season: The Huskers are earning a reputation as a team that throws in the towel when things get tough.

That's the analysis from their own coach after a 93-65 whipping at the hands of offensively challenged Rutgers on Saturday afternoon in Piscataway, New Jersey.

"We just folded," NU coach Fred Hoiberg said during his postgame radio show on the Huskers Radio Network. "And you've got to have some semblance of mental toughness if you're going to compete at this level, and we did not have that at all tonight.

"Mental, physical, they just manhandled us physically, and that's what happens when you have that combination."

Nebraska (6-10, 0-5 Big Ten) joined UMass and Maine — a couple of mid-major programs with a combined 10-16 record — as the only teams to allow the Scarlet Knights to crack the 80-point mark this season while losing for the seventh time in its last eight games and remaining winless this season against power conference competition.

Rutgers reached that threshold with more than six minutes still to play as the Huskers' defense and effort reverted to the form they showed in 30-plus point losses to Michigan and Auburn one month ago. It marked the first time since December 2020 that Rutgers hit the 90-point mark.

How quickly did things go sideways for Nebraska?

Just 70 seconds later, the Huskers were down 36-24. NU trailed by 13 at halftime. And Rutgers opened the second half by making 10 of its first 14 shots and leading by 20 with more than 15 minutes still to play.

"It's so disappointing to have that lack of competitiveness when things get difficult out there on the court," Hoiberg said. "Physically, mentally, we weren't there.

'The ball stopped going in the hoop': Late second half cold spell sends Husker men's hoops to 0-4 in Big Ten

The Scarlet Knights (9-5, 3-1), with the No. 13 scoring offense, No. 13 field-goal percentage and No. 11 three-point shooting percentage in the Big Ten, got essentially whatever it wanted against Husker defenders who took turns getting cooked.

RU hit its season high in points with nearly five minutes still to play. Five Rutgers players scored in double figures, including Dean Reiber. He had 10 after scoring 10 total points the entire season coming in. He had seven in the first half, including a dunk to beat the first-half buzzer.

Nebraska got 17 points from Bryce McGowens. Derrick Walker had 12 points and six boards while battling foul trouble, and C.J. Wilcher finished with 11 points.

But offensive stats, at least Nebraska's, mattered little on a day when, halfway into the season, the Huskers still aren't playing with the requisite amount of fight needed to even be consistently competitive against their conference brethren.

By the way, powerful Illinois comes to Lincoln on Tuesday, followed by an NU road trip to third-ranked Purdue later next week.

"You get your ass kicked by 30, it doesn't matter what you do on (offense). We were a mess on the other end. I thought we separated, really, on both ends, to be honest with you," Hoiberg said.

"When things got tough out there, we just flat-out folded. And that can't happen." 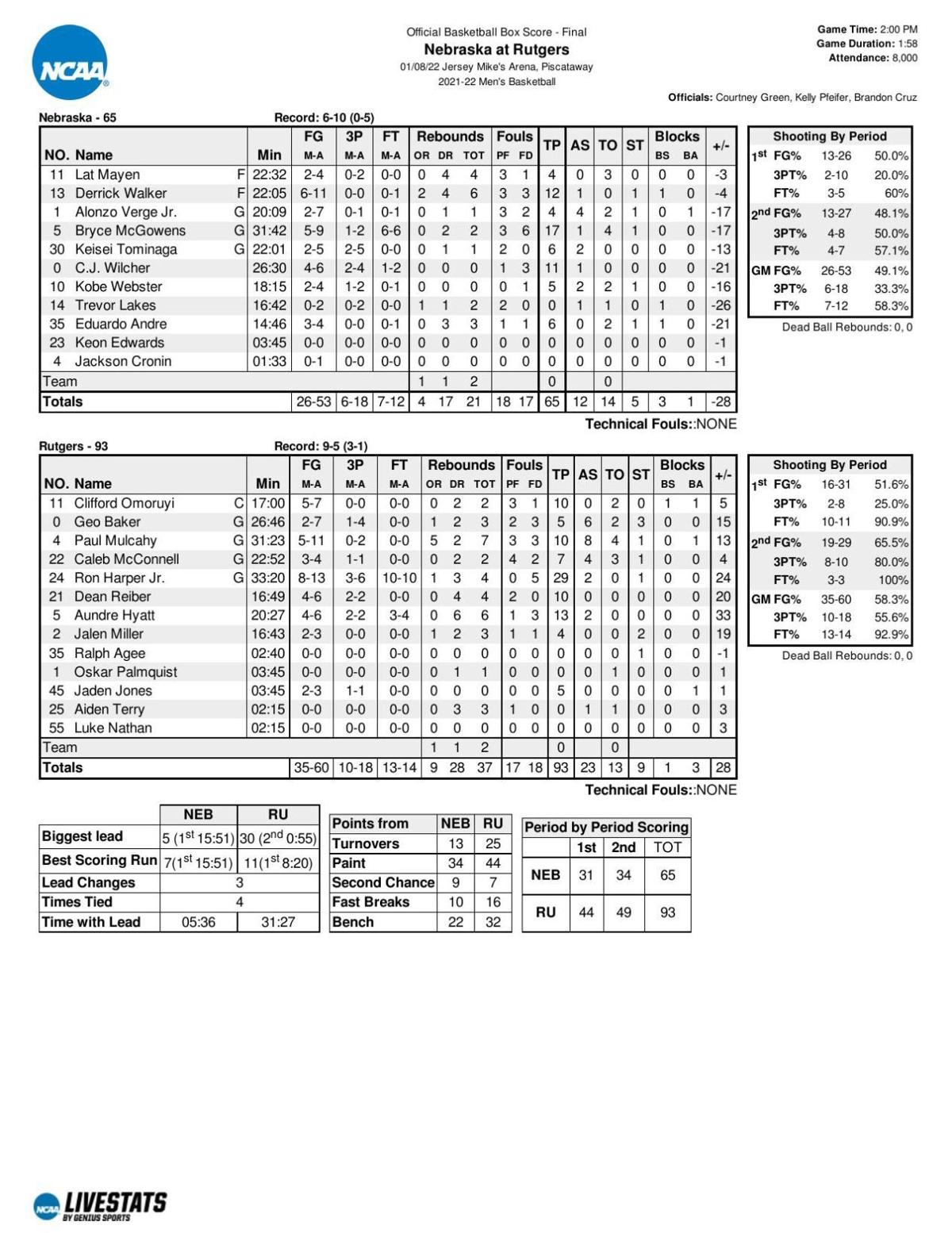 Jersey Mike's Arena, where the Scarlet Knights play, has become one of the toughest outs in the country over the past three seasons.

Steven M. Sipple: It's time for Frost to lock down a QB (or two) from portal; embrace suspense

Casey Thompson is Nebraska's prime QB target in transfer portal. He would be a fine addition. Check out this week's mailbag for more Husker chatter.

What's the 'bottom line' for Fred Hoiberg and the Huskers as they gear up for Big Ten road trip?

If the Nebraska men's basketball team truly feels that it has made progress, the next few days could show how far that belief stretches.

The strength of the league is already showing itself, with preseason favorite Purdue fighting just to be at .500 through four games.

NU is likely to hit some turbulence Tuesday, no matter how hard they may or may not play. The goal is to "compete through those tough times."

The final result was an 81-71 Illinois victory that showed once again, when it wants to, Nebraska can play with anyone in the conference.