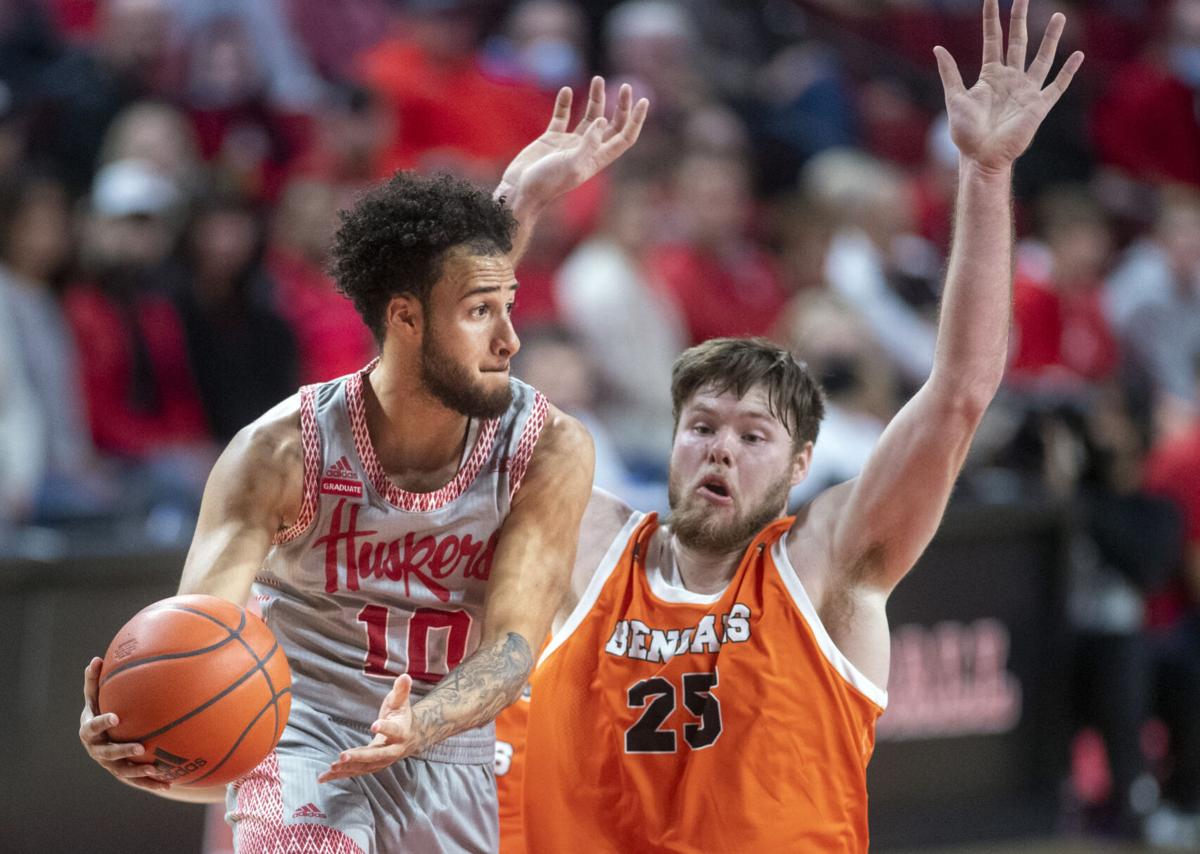 Nebraska's Kobe Webster (10) passes the ball guarded by Idaho State's Brayden Parker in the first half on Friday at Pinnacle Bank Arena. 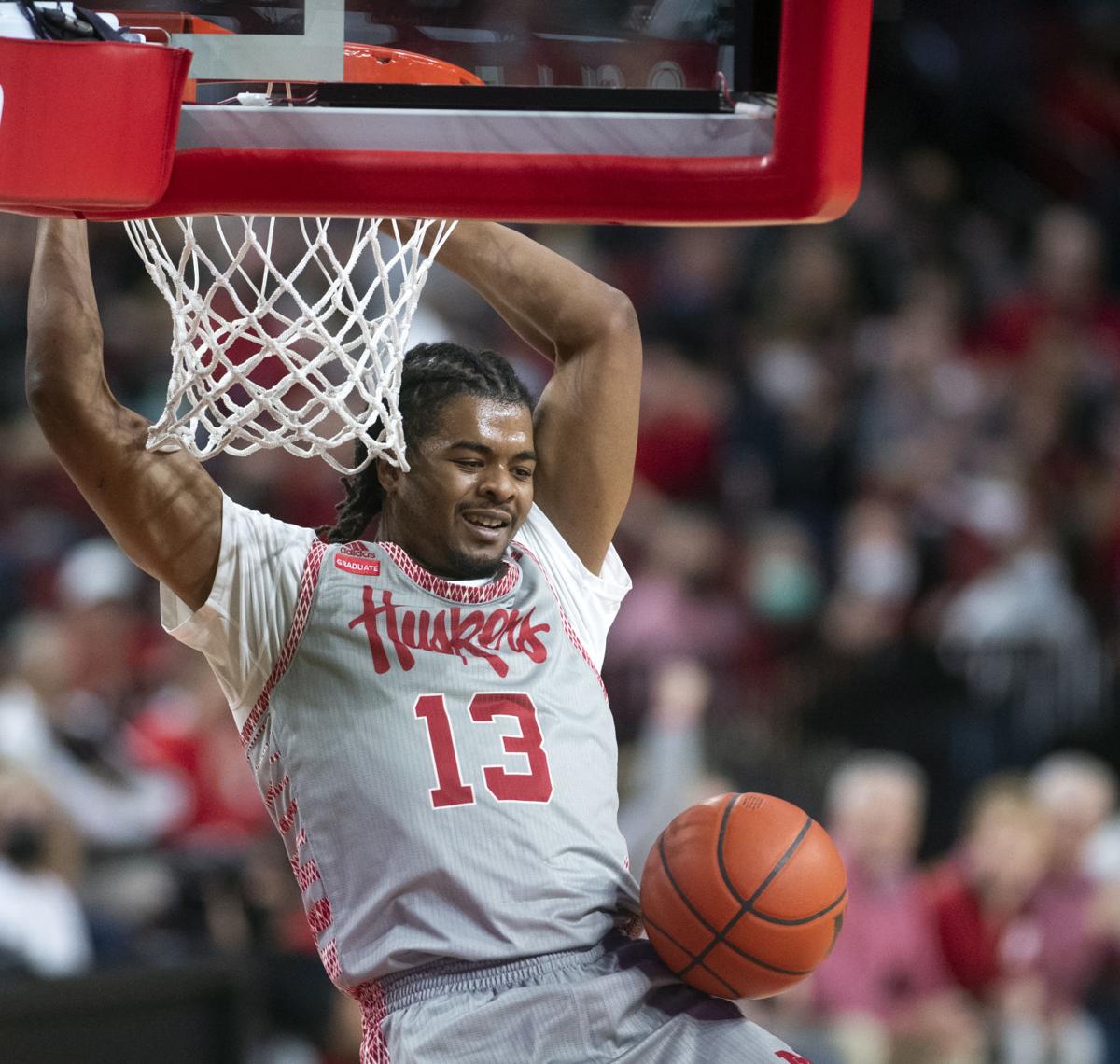 Nebraska's Derrick Walker dunks against Idaho State in the first half on Friday at Pinnacle Bank Arena.

The Nebraska men's basketball team on Friday had the kind of light bulb moment that a team only hopes to find before the conference schedule begins.

It's the kind you hope sticks, too. The Huskers, who have too often relied on one-on-one playmaking in this young season, passed the ball.

In wake of McGowens injury, Edwards the latest to get an opportunity to make an impact for Husker hoops

That's how it's supposed to look, right? Nebraska coach Fred Hoiberg took it one step further.

"That's how it has to look," Hoiberg said. "That's when we are at our best is when we get the ball hopping out there."

On several occasions, Nebraska players passed out of a bad situation into a good one. Bryce McGowens, for one, clearly came out motivated to get the ball "hopping." He collapsed a couple of defenders and slipped a pass to Lat Mayen, who hit a three-pointer in the first three minutes of the game. It seemed like a tone-setting play, even at the early juncture.

The "hidden" benefit to sharing the ball on offense pays off on the other side of the floor, where guys become more eager to play defense.

"You saw what happened when we moved it, everybody got involved and everyone was happy to get back on defense and play with some more energy," said NU freshman forward Wilhelm Breidenbach.

"It keeps you locked in," forward CJ Wilcher said. "You feel like a part of the game. … Energy finds the ball."

Breidenbach linked up with Keisei Tominaga, Kobe Webster and Wilcher to provide the Huskers with a serious jolt of energy off the bench.

Breidenbach drilled a pair of three-pointers on pick-and-pop plays. Wilcher also made two threes and finished with 10 points. Tominaga drew "oohs" and "aahs" from the crowd with a layup in which he essentially flipped the ball over his head while falling to the hardwood.

And Webster, the Huskers' motor in a loss to Creighton on Tuesday, continued to make his case for a consistent role in Hoiberg's rotation.

The senior had seven points, five assists and one shoulder shimmy after making an and-one layup. There's an unquantifiable sense of organization and togetherness he brings to the team when he is serving as the floor general.

Hoiberg agrees, and that's likely why Webster played 27 minutes Friday night after not appearing in either of the Huskers' first two games of the season before his 20-point outburst against the in-state rival this week.

"I think the biggest thing with Kobe is he has experience in the system," Hoiberg said. "When things aren't going great out there, he can calm us down and get us into the offense and get us moving."

Alonzo Verge, a senior transfer, has started every game at point guard this season. Playing on the court with Webster, he was able to find easier scoring chances. In one instance, Webster found Verge for an open three-pointer, and Verge cooly knocked it down.

Expect to see more of those two playing together, especially as fellow guard Trey McGowens misses an estimated six to eight weeks with a broken foot.

"I did like that," Hoiberg said of Verge and Webster's dynamic. "I thought it was really good. You got two playmakers out there, two guys that can get you into an offense and two guys that I thought played well off each other."

Derrick Walker is another Husker who shrugged off a slow start to the season Friday. Walker went 5-for-5 from the field and finished with a game-high 14 points, including back-to-back left-handed finishes to open the game.

Walker had only attempted eight shots this season before Friday's tilt.

"It was great to get Derrick going," Hoiberg said. "We got him a couple early looks at the rim, capitalized on that and had a couple good finishes on rolls."

The Huskers (2-2) return to action to host Southern at 3 p.m. Sunday at Pinnacle Bank Arena. 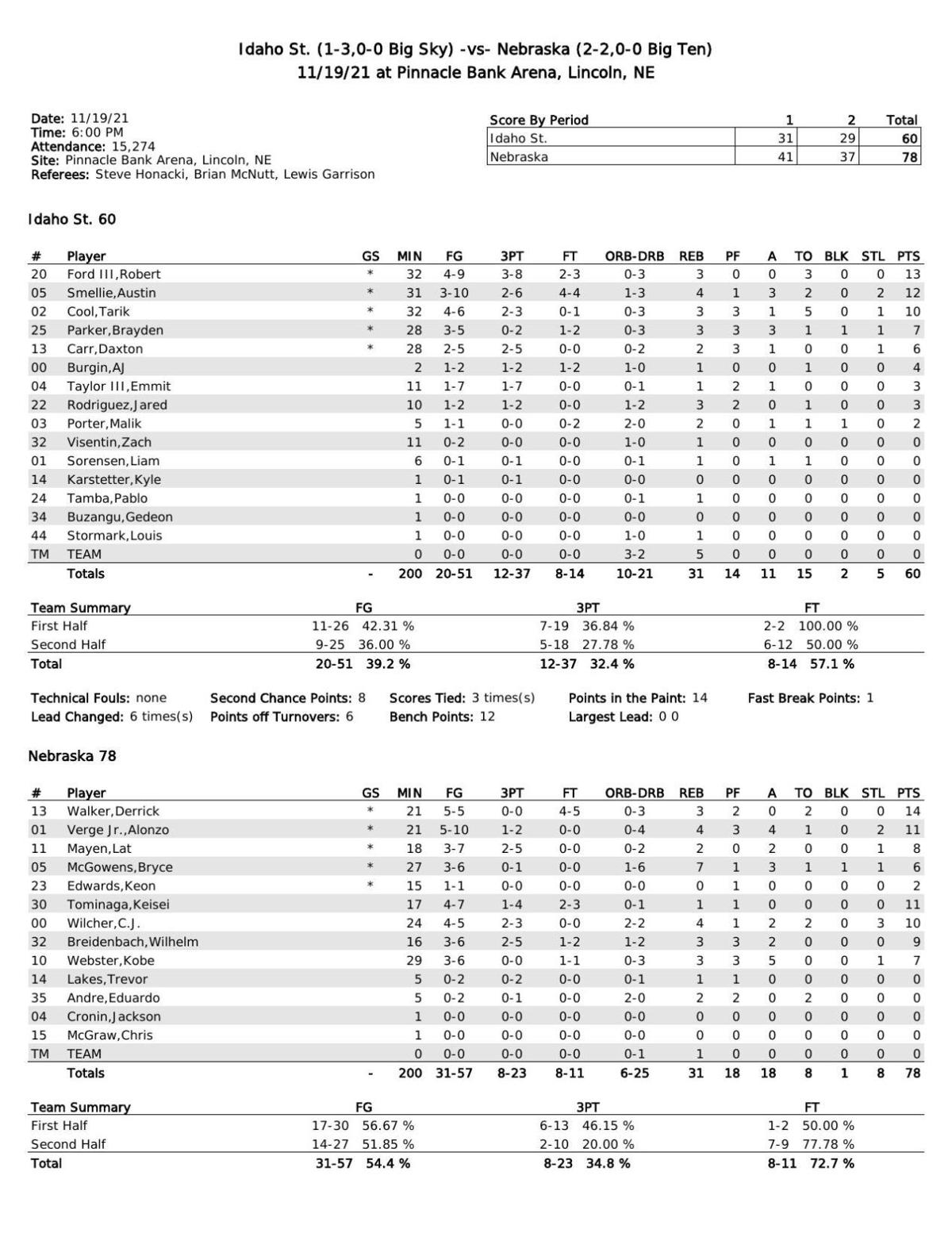 Photos: Husker men get back on track with home win over Idaho State

While McGowens' recovery timetable is unclear, it's likely he won't return until sometime in January at the earliest.

It was the same old story, just written a little differently, as Creighton built an early lead on a run that has become commonplace in this series.

Nebraska's Kobe Webster (10) passes the ball guarded by Idaho State's Brayden Parker in the first half on Friday at Pinnacle Bank Arena.

Nebraska's Derrick Walker dunks against Idaho State in the first half on Friday at Pinnacle Bank Arena.