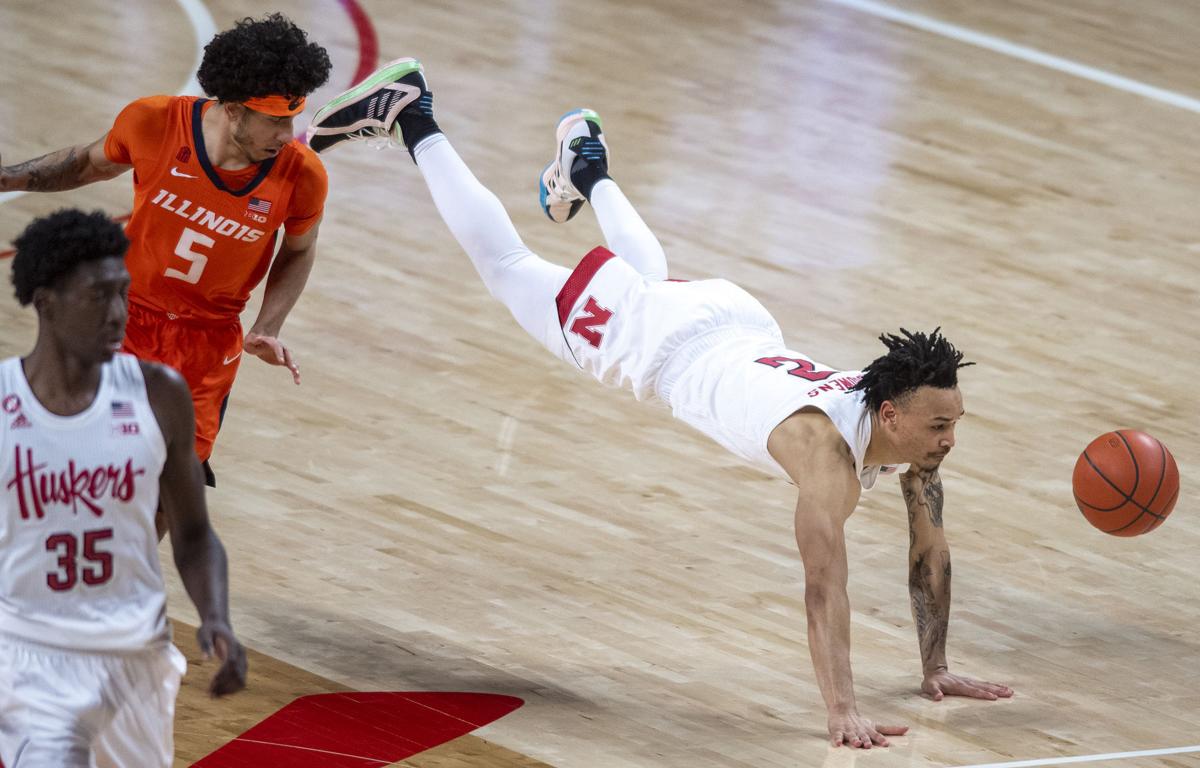 Nebraska guard Trey McGowens (right) hits the floor and loses the ball after coming into contact with Illinois’ Andre Curbelo (5) during the second half Friday at Pinnacle Bank Arena. 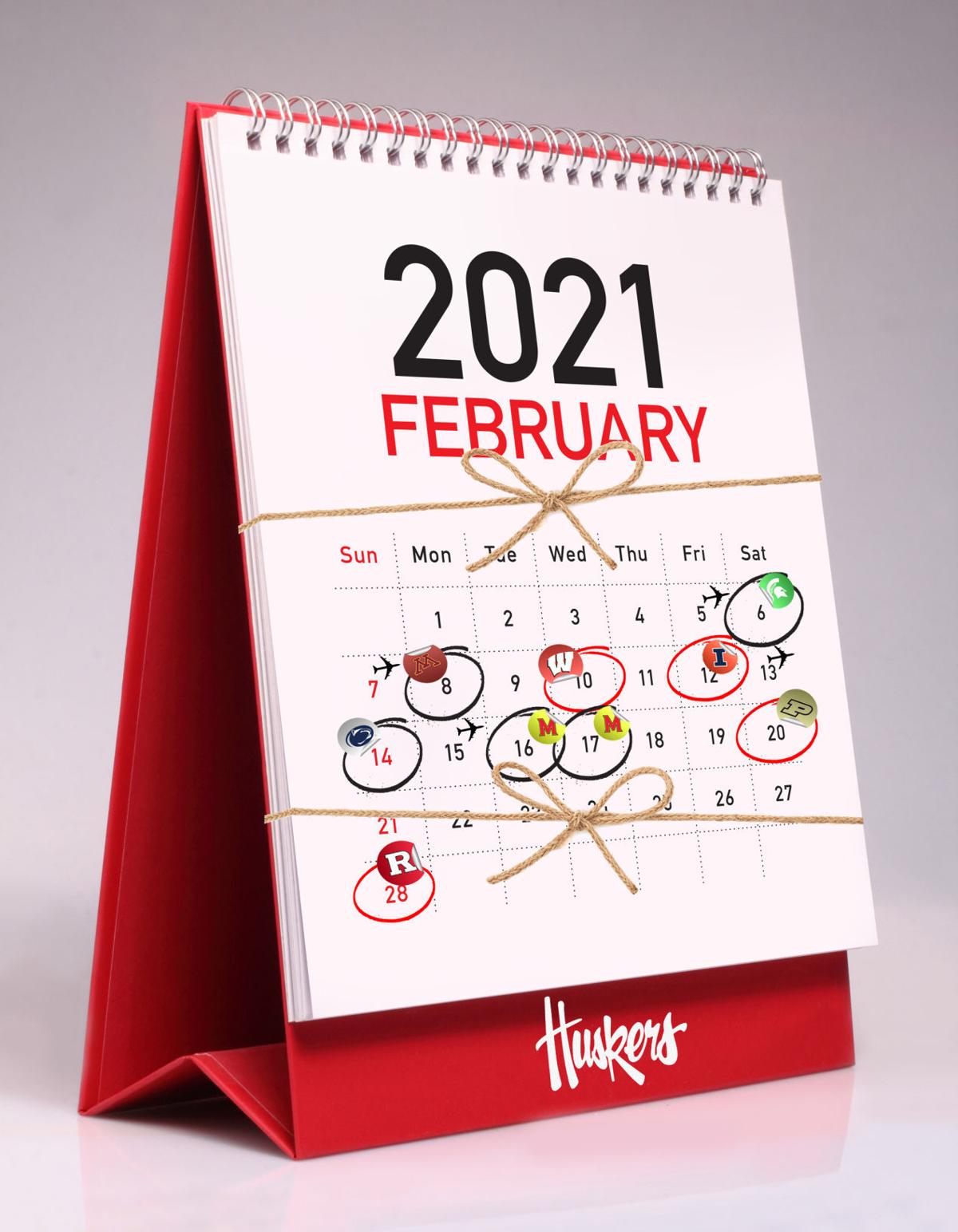 The debate as to whether the Nebraska men's basketball team should be playing all the games it is playing after coming off a three-week COVID-19 pause is, at this point, moot.

The Huskers are in the thick of it, with no turning back, and no end in sight for another three or so weeks as they try to cram a 20-game league schedule in by the end of the first week of March.

While the Big Ten Conference took a hard line against its football teams attempting to play a full slate of games, and while the league appears set to allow limited conference schedules in volleyball, baseball and softball, there appear to be no issues with stuffing as many basketball games as possible into a condensed window for teams ravaged by illness.

Amid 'incredibly difficult stretch,' Nebraska turns in best effort of season but falls to No. 6 Illini in OT

"The mental and physical health and welfare of our student-athletes has been at the center of every decision we have made regarding the ability to proceed forward," Big Ten commissioner Kevin Warren said when the league restarted football after a two-month pause.

The veracity of the commissioner's words in the fall appears to be up for debate, and certainly has been a topic of discussion in Nebraska.

The Huskers, less than 12 hours after a physically and emotionally draining loss to No. 6 Illinois, climbed aboard a plane around 9 a.m. Saturday and made the long flight out to State College, Pennsylvania, where they will play Penn State at 2 p.m. Sunday. After that game, NU will fly to Maryland, where it will face the Terrapins on back-to-back nights Tuesday and Wednesday.

After the final buzzer sounds Wednesday evening, Nebraska will have played seven games in 12 days across five states, beginning that run about one week after ending its COVID-19 shutdown. Then the Huskers will fly home, and have two entire days before their next game Feb. 20 against Purdue, followed likely by another four-game week.

"For people that have played this game, you know how hard that is, to take that amount of time off and have your bodies deconditioned, and then have to ask your guys to bounce back and compete like they are, and have games stacked up on top of each other, and to play their asses off every time they're stepping on the floor?" Nebraska coach Fred Hoiberg said Friday.

The always-collected Hoiberg's voice rose steadily as he spoke of NU's current grind. He understands it deeply, as a player and coach in the NBA, where long road trips and back-to-back games are the norm.

But Nebraska's players aren't getting a salary to play on back-to-back nights in empty arenas around the Midwest. And they're essentially having to play themselves back into shape in the toughest league in the country, with little time to recover between games.

"It's tough. I ain't gonna sit here and lie, it's tough. We're not used to it," NU forward Lat Mayen said Friday. "I don't know about the rest of the guys, but for me, I've never played games back to back or every second day. So it's definitely tough on your body, and mentally.

"But you just got to take care of your body the best you can, eat the right food, ice tub, all that stuff. It's definitely tough. But you've got to prepare yourself."

The Maryland games will mark the first time Nebraska plays the same opponent on back-to-back days since taking on Hawaii on Dec. 2 and 3 of 1976. Those games were part of a three-game set in the islands, which are decidedly more welcoming from a weather standpoint than any Big Ten locale in the winter.

It remains to be seen whether Nebraska, last in the league standings and riding a 26-game conference losing streak, is being offered up as some sort of sacrificial lamb for those Big Ten teams needing victories to secure NCAA Tournament berths.

Clarity could come soon as Michigan, 13-1 overall and leading the conference, begins its return from a 23-day shutdown this weekend. The Wolverines had to postpone five games during their pause, and will have about three weeks to play 11 games if they are to get to 20 league contests.

"Rushing and playing that many games in a short amount of time, does it give the human body time to recover? At the end of the day, we’re not machines. We are humans. That’s not the type of pressure that I want to put on my student-athletes," Michigan coach Juwan Howard said Friday. "Unfortunately, this is a very uncomfortable year, crazy times that we are all dealing with. At the end of the day we have to be smart about — if the main thing is health and safety, then let’s make sure that’s the main thing. Is it smart to play that many games in that many days?"

Smart or not, Nebraska has its marching orders. And the Huskers plan to keep showing up whenever there's a game to be played.

"We’ve been prepared for this and we knew this type of schedule could be a thing, so I think at this point it’s more mental toughness than physical toughness," said NU forward Derrick Walker after he spent Friday trying to leg press 7-foot, 285-pound Illinois forward Kofi Cockburn out of the paint.

"With us playing almost every other day, we’ve got to be more mentally tough than physically tough. So as long as we’re taking care of our bodies, doing the right treatment, and hydrating, we’ll be fine."

Photos: Nebraska takes No. 6 Illinois to overtime but falls 77-72

As promised, Nebraska slowed the pace. We break down the numbers, hear from Derrick Walker on defending Kofi Cockburn and more.

In search of answers on offense, Huskers may throttle back on one of nation's fastest tempos

Fred Hoiberg's preferred color has long been green. Green as in go. But now it might be time to pump the brakes on offense.

'We were really excited to keep playing': NWU men's hoops has five-game homestand called off because of COVID concerns

Instead of moving full speed ahead with five home games over the next seven days, the Wolves have once again had to put things in park.

The play of Derrick Walker and Teddy Allen helped the Huskers snap their 26-game Big Ten losing streak on Sunday.

Most NCAA Tournament projections have Michigan and Ohio State as No. 1 seeds — the strength at the top of the Big Ten is the real deal.

In a familiar refrain, Husker hoops turns to defense in return to floor

Doc Sadler had to be sitting on his couch and smiling.

Ron Brown has worked with Scott Frost since Frost took the head coaching job at Nebraska.

Don't be surprised if Scott Frost's program isn't high on the list of college destinations for the top few in-state players in the class of 2022.

Nebraska guard Trey McGowens (right) hits the floor and loses the ball after coming into contact with Illinois’ Andre Curbelo (5) during the second half Friday at Pinnacle Bank Arena.