Doc Sadler has resigned at Southern Mississippi and is a strong candidate to join Fred Hoiberg's staff at Nebraska.

The gregarious former Nebraska basketball head coach who was replaced by Tim Miles could be headed back to Lincoln, this time as an assistant on Hoiberg's staff, a source told the Journal Star on Wednesday.

"I really don’t have a comment right now for you," Sadler told the Journal Star Thursday morning shortly after the news broke. "But I look forward to visiting with Coach Hoiberg more about the position."

"I've decided it's time for me to take a step back from being a head coach," Sadler said in the statement.

Later, at a press conference announcing his resignation, Sadler said it was "a good possibility he would be heading to Nebraska." He planned to travel to Lincoln and meet face-to-face with Hoiberg this weekend.

Sadler was an assistant on Hoiberg's 2013-14 Iowa State team that went 28-8, advanced to the Sweet 16 and finished ninth in the final AP Top 25 poll that season.

He left for Southern Mississippi after that year.

Now, he's leaving Southern Miss and could be coming back to Lincoln. Sadler went 101-87 in six seasons at the helm for NU, taking the Huskers to the NIT three times.

"After 16 years as a college head coach, it's time to evaluate what's next for me," Sadler said in the statement. "With a new athletic director in place and a talented young team, I feel the best days are ahead for Southern Miss basketball."

Sadler was fired after the 2011-12 season, Nebraska's first in the Big Ten, after NU went 12-18 and 4-14 in the conference. Beloved by the Nebraska fan base, Sadler finished with winning records in four of his six seasons on the Nebraska sideline. But he never finished above .500 in conference play.

He fits the mold of the defensive coach Hoiberg is looking for. Nebraska athletic director Bill Moos said last week Hoiberg was "in hot pursuit" of a defensive coach for his staff. Three of Sadler's Nebraska teams finished in the top 22 nationally in defensive efficiency and were also strong in keeping opponents off the offensive glass, according to data from KenPom.

The 58-year-old, who has been the head coach at Southern Mississippi since 2014, had just started working for a new athletic director in Hattiesburg. Southern Miss last week hired Troy athletic director Jeremy McClain to the same position. Sadler went 56-94 at Southern Miss, but that comes with a caveat — the Golden Eagles are coming off a 20-win season and Sadler has improved the team's record in each of the past four seasons.

Sadler made an annual salary of $350,000 at Southern Miss. While he'll take a pay cut if he comes back to Nebraska, it likely won't be a significant one. The pool of money for Hoiberg's three assistants is $1 million. With Matt Abdelmassih making $380,000, that leaves $620,000 to divide among the remaining two assistant positions.

A source told the Journal Star on Wednesday that Nebraska's final two assistant coach positions should be finalized by the weekend.

Following the formal news conference, Fred Hoiberg and Bill Moos addressed the media on the side to talk coaching philosophy, assistant coache…

Fred Hoiberg impressed at his introductory news conference for the Huskers, and now, Chris Basnett and Steven M. Sipple are here to answer all…

Molinari, Sadler among those under consideration for Husker hoops assistant positions

Bobby Lutz will be a part of Fred Hoiberg's coaching staff at Nebraska.

Steven M. Sipple: Oh, the stories Dave Van Horn can tell; some might even help Hoiberg

As was the case with former Nebraska baseball coach Dave Van Horn, Fred Hoiberg can always find time-worn excuses if the Husker basketball program struggles. Van Horn's approach? Don't let history hold you back. Don't make excuses. Or at least be careful about who's around if you are making excuses.

Former Nebraska men's basketball coach Jerry Bush was known as the "Big Bear of the Coliseum" because he was 6-foot-4 and 225 pounds. But he was a kind and mannerly soul. If Bush ever used a curse word, Lloyd Castner never heard him do it. If Bush ever treated anyone poorly, Castner never saw it happen.

For all the big dreams Nebraska basketball fans may have with the hiring of Fred Hoiberg, there is still going to be a period of transition that at times will be a little rocky. But if it works out like it did in Ames, the payoff will be worth the time.

The Nebraska basketball coaching staff will have a familiar ring to it. The Huskers made official the additions of Armon Gates and Doc Sadler on Friday, completing a staff that already included Matt Abdelmassih and Bobby Lutz.

Saturday was a big recruiting day at Memorial Stadium.

Jervay Green is still a Husker. 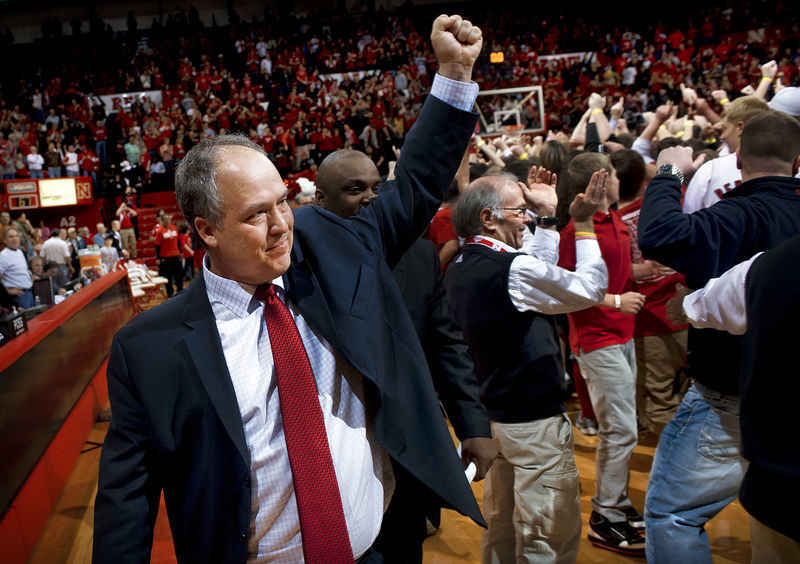