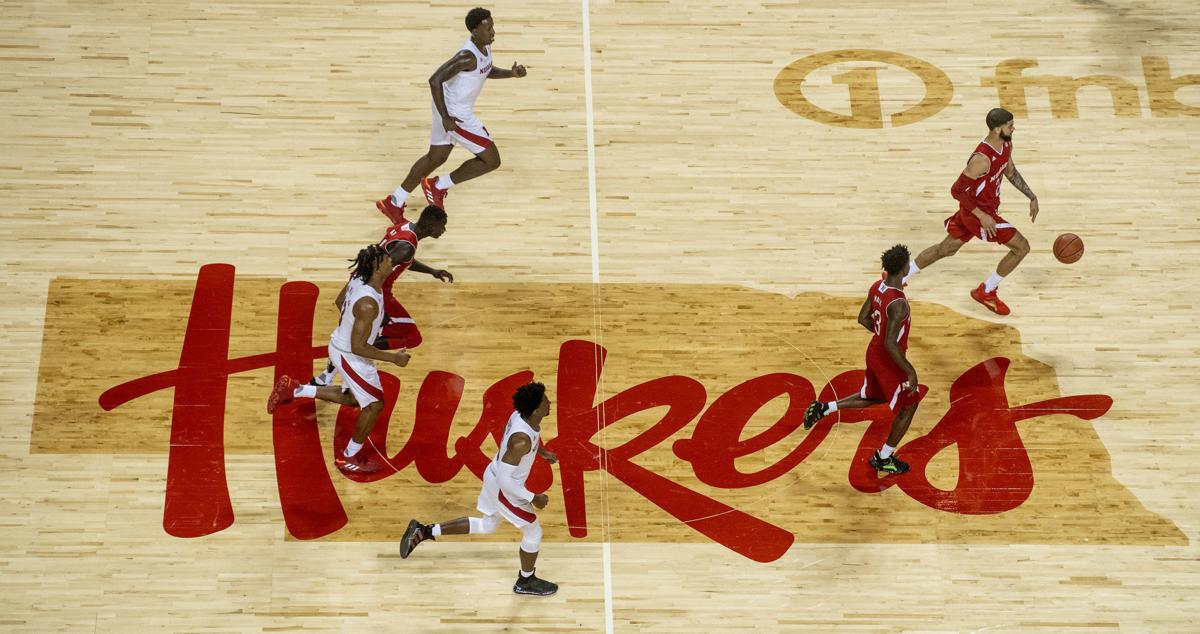 The Nebraska Red and White teams play on the Huskers' new court on Friday during the Huskers' Opening Night at Pinnacle Bank Arena. 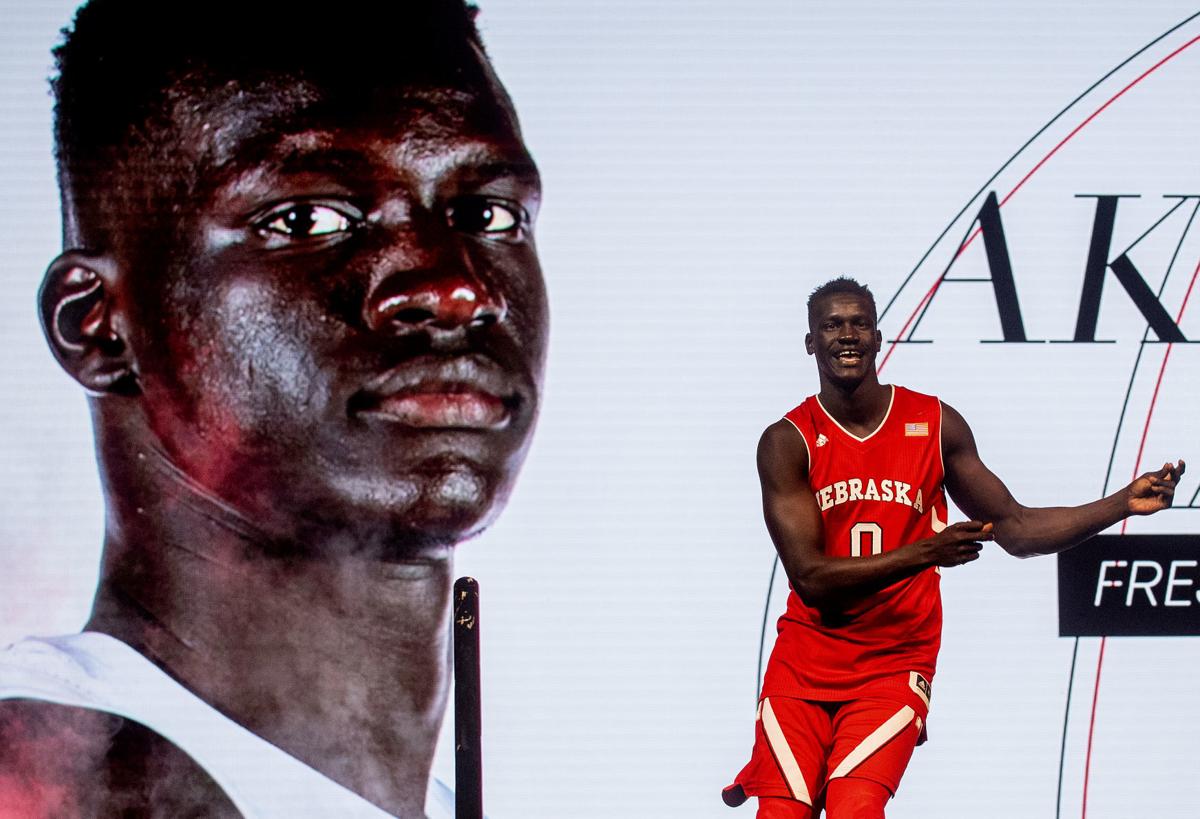 Nebraska's Akol Arop dances to Tom Jones' "It's Not Unusual" as he's introduced to the crowd on Friday during NU basketball's Opening Night at Pinnacle Bank Arena. Arop is a Creighton prep graduate.

The night before a huge football game, on a night full of high school football games, in a state that lives and breathes football, Nebraska basketball was the show, at least for a couple of hours Friday night.

The Red Team beat the White 56-39 at Pinnacle Bank Arena, but that didn't really matter. Opening Night with Husker Hoops did what it set out to do — get people excited about hoops in September.

"What we’re going to do — we’ve got the most supportive fan base, I think, in all of athletics," Nebraska head coach Fred Hoiberg said to the approving roar of the 8,000 or so in attendance. "And what we’re going to do, every time we step on this floor, is we’re going to put a product on the floor that will make all of you proud. We’re going to leave everything out here."

That time will come starting in November. For now, Friday night was about showing off. It wasn't the prettiest basketball in history, but it wasn't supposed to be.

After the women's team was introduced, the Husker men were brought out one by one. Jervay Green entered to "I Wanna Dance With Somebody" by Whitney Houston. Akol Arop probably won a bet by coming out to "It's Not Unusual" by Tom Jones and dancing on stage.

Lincoln native Charlie Easley got a big pop from the crowd. Thorir Thorbjarnarson might have gotten the biggest cheers of any player. Assistant coach Doc Sadler was showered with love. A live DJ kept the music going, and will apparently be a part of the PBA atmosphere going forward.

Hoiberg was the last to come to the court, following his players out from the stage set up at the north end of the arena for Rick Ross.

The coach entered to "Back in Black" by AC/DC. He leaped into a mosh pit of his players near midcourt. He fired up the crowd.

"Our motto is to be the hardest-working, most together team," Hoiberg told the crowd. "And we're going to put everything on the line for you guys."

This was probably the most star-studded crowd to attend a Nebraska basketball scrimmage. UNL chancellor Ronnie Green was courtside, as was former Husker and current Dallas Maverick Isaiah Roby.

Larry the Cable Guy, who appeared in a skit with Hoiberg that ran before the scrimmage, was in attendance, as were several players from the past couple of years of Husker hoops — Isaac Copeland, Anton Gill, Tanner Borchardt and Johnny Trueblood.

They saw something that didn't look much like the teams they played on, on a night that looked different from just about any in the history of the program.

What it looks like in the months and years to come is yet to be seen. But Friday provided something new. Hoops in September. Who'da thunk it?

It's one of the biggest weekends of the year, with a star-studded event and a ton of recruits in town for what could be a definitive night for…

Observations from the first official practice of the Fred Hoiberg era

The Nebraska men's basketball team appears to have taken a page out of the football team's playbook.

Hoiberg, Huskers will have a full PBA for 'Opening Night' event in late September

While Husker nation gets its blood boiling for Saturday's football game at Colorado, the NU men's basketball program is gearing up for the sta…

The Big Ten Conference has not, for years now, put together a preseason poll for men's basketball. League media members are asked to vote only…

ROSEMONT, Ill. — Fred Hoiberg made his first appearance at Big Ten Media Day on Wednesday morning, and the Nebraska men's basketball coach was…

Hoiberg, Huskers introduce themselves to the Big Ten, lay out beginnings of how they plan to build

Not all that far from where he was coaching the Chicago Bulls less than a year ago, Nebraska's Fred Hoiberg deadpanned that he didn't much miss the annual media gatherings from his days with Iowa State in the Big 12. Then he got down to the business of trying to explain just how all this — 14 new players and an almost entirely new coaching staff — will work this season.

ROSEMONT, Ill. — Nebraska men's basketball coach Fred Hoiberg, like most of the coaches at Big Ten Media Day, came out in support of the recen…

Forced to slow down after hospital stay, Mack ready to put the pedal down for Husker hoops

With the caveat that it's nearly impossible to predict these things, it appears the Nebraska men's basketball team could have a key piece of i…

Former Nebraska basketball player Isaiah Roby is on the move again in the NBA.

The Nebraska Red and White teams play on the Huskers' new court on Friday during the Huskers' Opening Night at Pinnacle Bank Arena.

Nebraska's Akol Arop dances to Tom Jones' "It's Not Unusual" as he's introduced to the crowd on Friday during NU basketball's Opening Night at Pinnacle Bank Arena. Arop is a Creighton prep graduate.