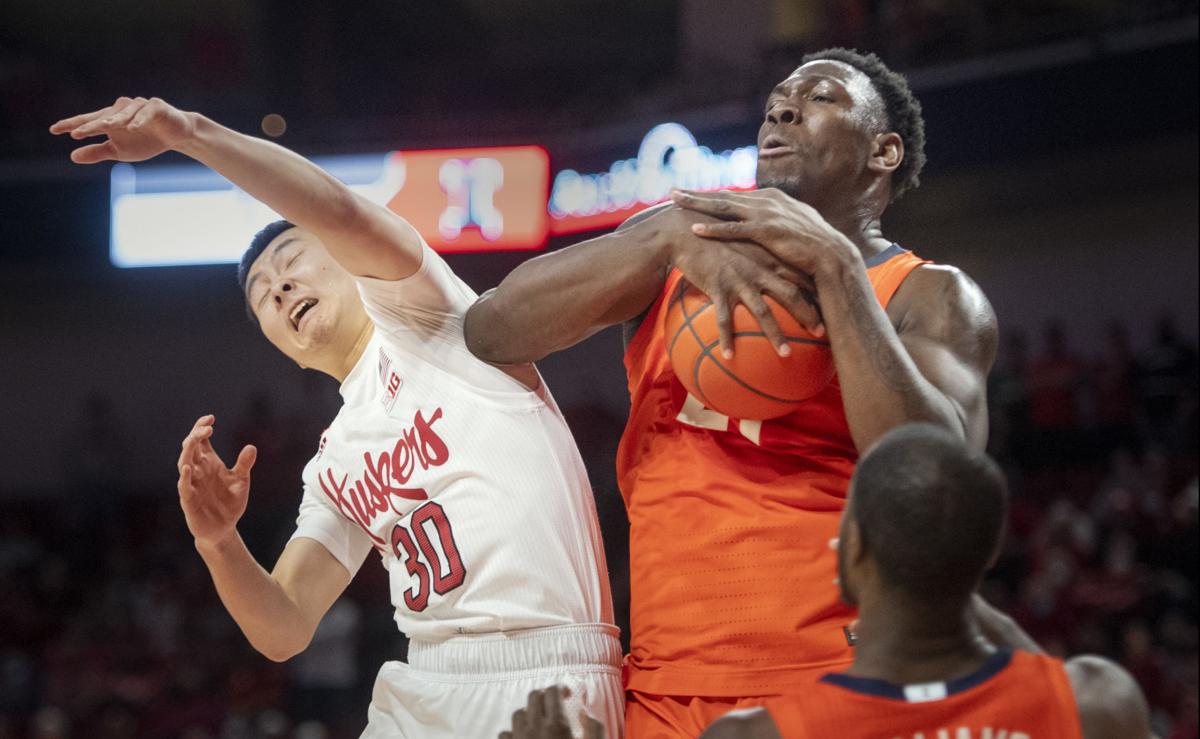 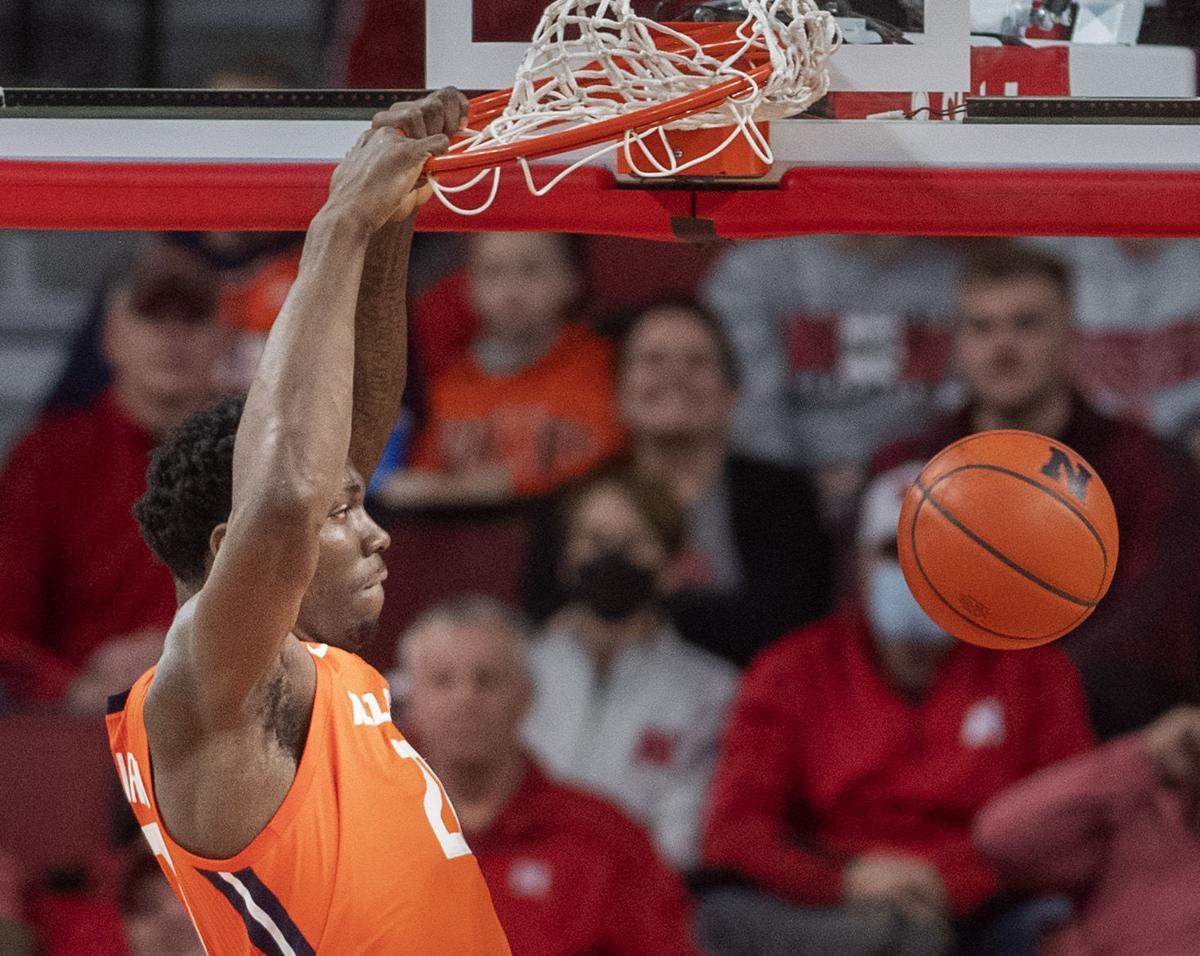 Illinois' Kofi Cockburn dunks against Nebraska during the first half Tuesday at Pinnacle Bank Arena.

The fight returned for Nebraska.

After pulling into a tie with No. 25 Illinois with less than four minutes to go, Nebraska immediately surrendered a 7-0 run with the same bugaboos that have handicapped it all year — poor execution, poor communication, and a lack of belief in being able to close out a game it had a real chance of winning.

The final result was an 81-71 Illinois victory Tuesday that showed once again, when it wants to, Nebraska can play with anyone in the conference — even if the Huskers can't get out of their own way.

"That's a big thing right now," NU coach Fred Hoiberg said. "When it gets down to crunch time, you've got to find a way to win some of these games to get the confidence to know you can do it."

Right now, all Nebraska knows is the monotony of searching for moral victories.

In a taut second half during which neither team led by more than five points until Illinois took control late, Nebraska (6-11, 0-6 Big Ten) hung around and weathered adversity as well as it had all season — perhaps surprisingly after coming off a 28-point loss at Rutgers during which NU looked disinterested for most of the last 25 minutes.

Freshman Bryce McGowens, after drawing the third and fourth fouls on imposing Illinois center Kofi Cockburn, knocked down both ends of a 1-and-1 to tie the game at 65 with 3:57 to go.

What followed: three Illinois offensive rebounds and a basket, all by backup center Coleman Hawkins, on the same possession; a blocked Nebraska layup, an Illinois alley-oop; a Nebraska turnover; and an Illini three-pointer to put Illinois up 72-65 in just 90 seconds.

"I just feel like we didn't execute our plays or echo the calls on offense," McGowens said. "It's a game of runs, and they had the last push at the end."

Trent Frazier scored a season-high 29 points for Illinois, including his team's last seven. Cockburn had 16 points and 13 boards, but NU forwards Derrick Walker and Eduardo Andre made him work for his points as Cockburn finished 8-for-18 from the floor and finished with a minus-7 plus/minus, meaning Nebraska outscored Illinois by seven points when he was on the floor — just the third time this season Cockburn has finished in the negative.

McGowens scored 19 for Nebraska, including a couple of highlight dunks. Alonzo Verge had 14 points, four rebounds and nine assists. Walker had 14 points and seven rebounds.

But once again, with a golden opportunity to secure a win, Nebraska couldn't execute when the chips were down.

"Our effort was phenomenal; we fought them all the way to the end," Hoiberg said. "Got to execute better down the stretch."

Nebraska dominated the first four and last five minutes of the first half to go into the locker room with a lead against a power conference opponent for just the second time in 10 tries this season and the first time since the North Carolina State game on Dec. 1.

The Huskers made six straight shots and went 4-for-4 from three-point range in the opening minutes to sprint to a 16-4 lead. Over the last five minutes, NU outscored Illinois 11-0 to erase a 31-23 deficit as the Illini went scoreless with five turnovers over the final 4:43 of the half.

In between, Illinois outscored NU 27-7 and threatened to turn things into a repeat of Nebraska’s performance at Rutgers on Sunday.

But NU weathered that storm, getting 10 points from McGowens, and eight from Keisei Tominaga on 3-for-3 shooting to go with two rebounds, one assist, and a steal.

Now, the Huskers will fly right into the middle of another storm: next up is a trip to No. 7 Purdue on Friday. 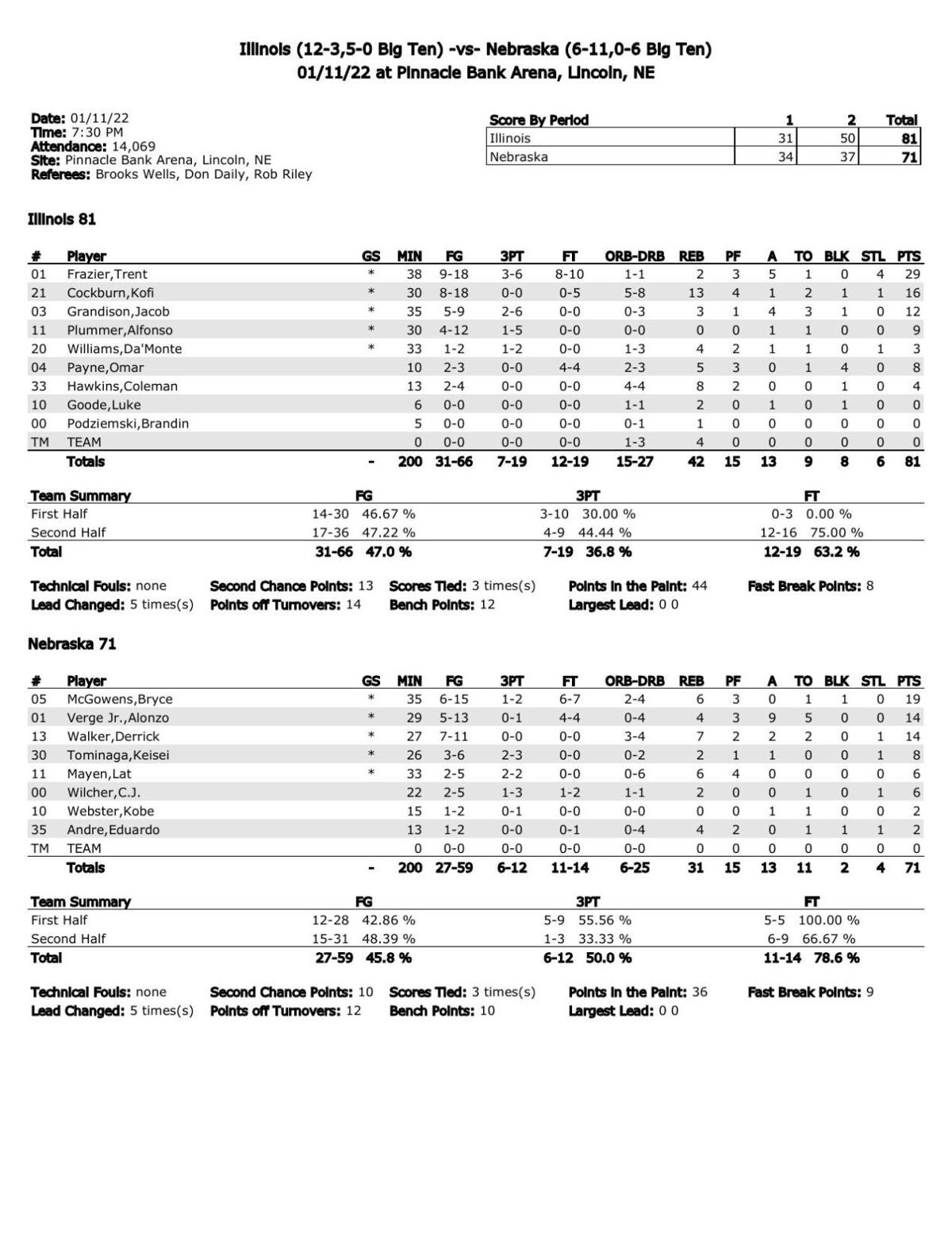 Photos: Nebraska has tall task in Illinois as it seeks first Big Ten win of season

The strength of the league is already showing itself, with preseason favorite Purdue fighting just to be at .500 through four games.

Before the season, it was OK to put an NIT bid as an expectation for Fred Hoiberg's third-year Husker program. That now looks like a pipe dream.

Nebraska is earning a reputation as a team that throws in the towel when things get tough.

Four minutes, and a few comments, show the gap between Husker hoops and competing in the Big Ten

The route Brad Underwood chose with Illinois is to build with freshmen and keep them in the program, a contrast to Nebraska's transfer-heavy approach.

The return of Trey McGowens is imminent, and not a moment too soon for Husker hoops

Nebraska has sorely missed its leader, who has returned to practice after a leg injury kept him out nearly two months. When will he return to action?

Illinois' Kofi Cockburn dunks against Nebraska during the first half Tuesday at Pinnacle Bank Arena.