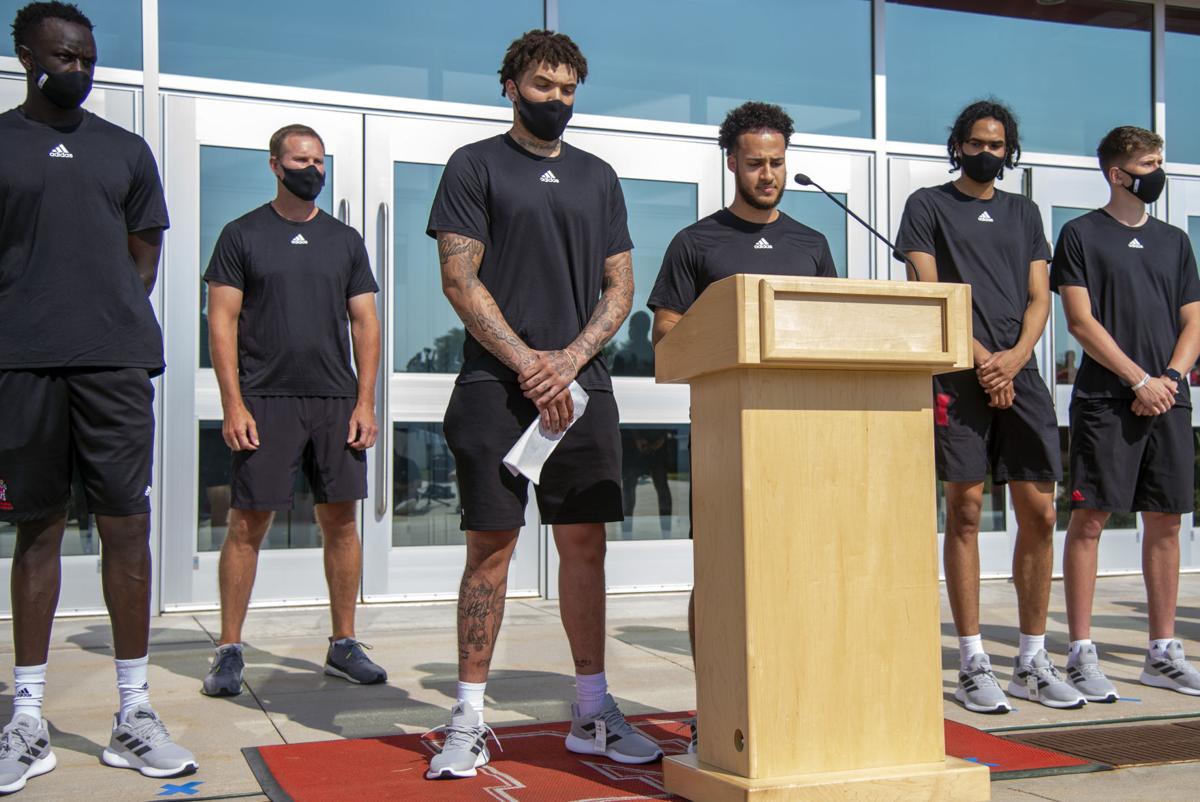 Nebraska men's basketball players Teddy Allen (center left) and Kobe Webster (center right) make a social justice statement as head coach Fred Hoiberg and the rest of the team line up next to them Aug. 27 at Hendricks Athletic Complex. 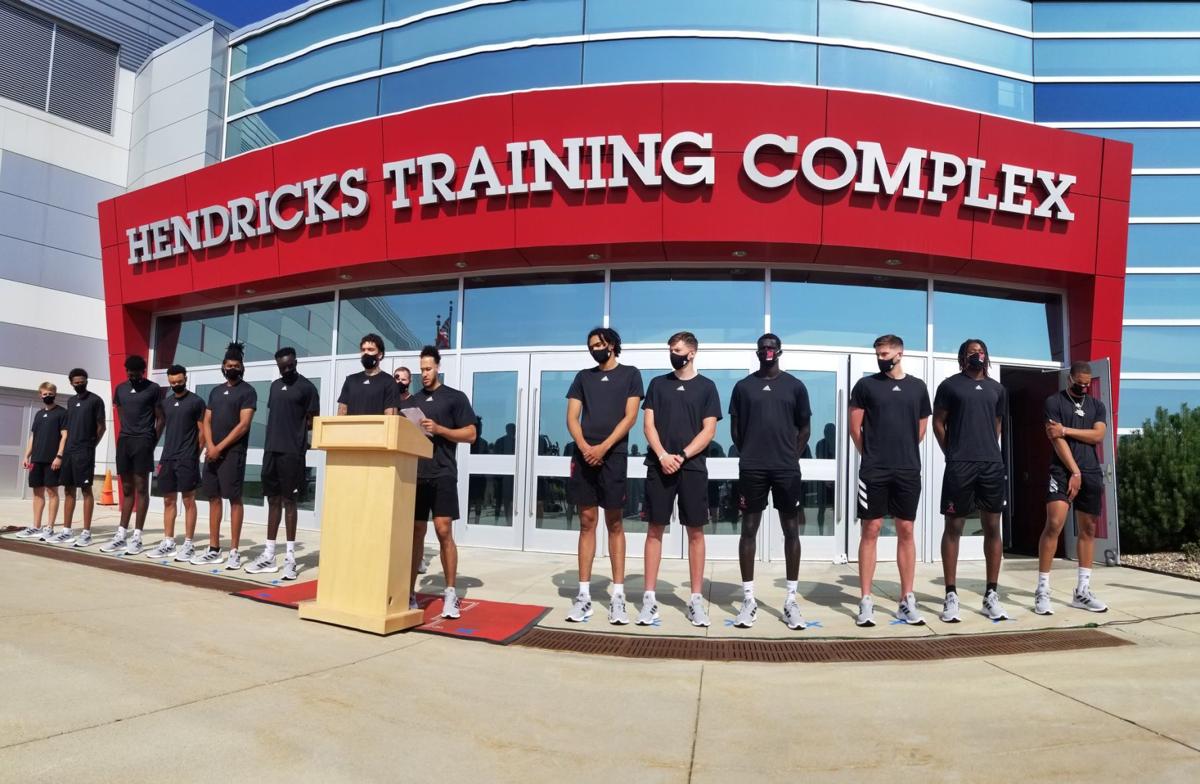 Nebraska basketball players appear outside the Hendricks Training Complex on Thursday to make a stand for social justice.

In less than five minutes, and with five words, the Nebraska men's basketball team made it clear they won't stand idly by in the push for social justice in the nation.

Junior guard Teddy Allen closed Thursday's statement by the Huskers with a phrase that cuts right to the heart of the message the team hopes to get across.

"No more hashtags, only change," Allen said while standing at a podium in front of the Hendricks Practice Complex.

No Sallis, but plenty of options as Husker hoops works to fill out 2021 class

Mid-September announcement expected on start date for Division I basketball

He was flanked on either side by his Nebraska teammates, with head coach Fred Hoiberg standing behind the line of players.

After that, Allen and Kobe Webster, who also spoke on behalf of the team, walked silently back inside followed by their teammates and Hoiberg.

Each man wore a black shirt and black shorts.

It was a powerful moment for a program that has become familiar with taking the lead on social justice issues.

The statement started with each player walking out individually and saying the name of a Black man or woman who has been the victim of police violence.

As the NBA, WNBA, NHL, MLB and NFL called off games and practices in the days following the shooting of Blake, a 29-year-old black man, by police in Kenosha, Wisconsin, Nebraska's players and coaches gathered to decide how to best move forward.

The result was Thursday's statement.

One by one, the rest of the Huskers followed, uttering the names of George Floyd, Breonna Taylor, Ahmaud Arbery and others. After the players, Hoiberg emerged.

"I stand here for all Black lives," the coach said.

Webster and Allen then followed, each reading from a statement prepared by the team.

"We stand together as one to find ways to educate people to hopefully stop this terrible trend of lives being lost for now reason," Webster said. "This is not a political fight. This about being a decent human being."

The day was reminiscent of 2018, when the men's hoops team again took a strong stand in fighting for equality.

In February of that year, Nebraska’s players shared a unified message against hate on social media just days after a University of Nebraska-Lincoln student claiming to be “the most active white nationalist in the Nebraska area” posted videos to his own social media that depicted him discussing his desire to be violent.

The next day, players Evan Taylor and Glynn Watson spoke about their reaction to the videos. For the rest of the season, the team wore black shirts with the words “Hate will never win” in white letters on the front.

While it’s unclear what the next step is for this year’s Nebraska team, the Huskers once again stood unified for their cause.

"We know we are not going to change everything that is going on by standing here today," Webster said. "The goal for us is simply to make our community and our state stand behind us in not accepting these injustices as OK and turning a blind eye."

Allen was blunt in his remarks.

"We are tired of talking about the same things over and over while losing precious lives along the way," he said. "Are we fighting a pointless fight? How many more hashtags need to be created by the police for people to start caring?

"We cannot care when it is convenient. We cannot only care when it impacts us directly. Caring about someone else's life should fall within basic human ideals."

Other college teams surely will follow Nebraska's lead in the coming days and weeks in releasing statements and working toward actions they can take to affect change.

The Huskers, though, were prepared to be the first.

"We want to play a role in change," Allen said. "And we want you all to join us."

Hunter Sallis, the high-flying Millard North senior, trimmed his list of potential schools to 12 on Sunday, and the Huskers did not make the list.

As football stumbles forward, college hoops is looking for ways to put on a season. And yes, talks of 'bubble' floating around

"Very confident" is a phrase not uttered in relation to sports right now. But college basketball officials seem adamant on a season.

It's anybody's guess what the college basketball season will look look like, but  some people are looking ahead.

You might be curious as to when the college basketball season will actually start.

The initiative will "provide minorities a jumpstart to their careers through practical experiences and opportunities to build their network."

The target date is a little more than two weeks after the originally scheduled start to the season.

While a college basketball season of some type is on the horizon, it's not clear yet just what that season would look like for Nebraska.

It probably wasn't a coincidence that it was Teddy Allen and Kobe Webster speaking Wednesday considering the duo's emergence behind the scenes.

Nebraska men's basketball players Teddy Allen (center left) and Kobe Webster (center right) make a social justice statement as head coach Fred Hoiberg and the rest of the team line up next to them Aug. 27 at Hendricks Athletic Complex.

Nebraska basketball players appear outside the Hendricks Training Complex on Thursday to make a stand for social justice.