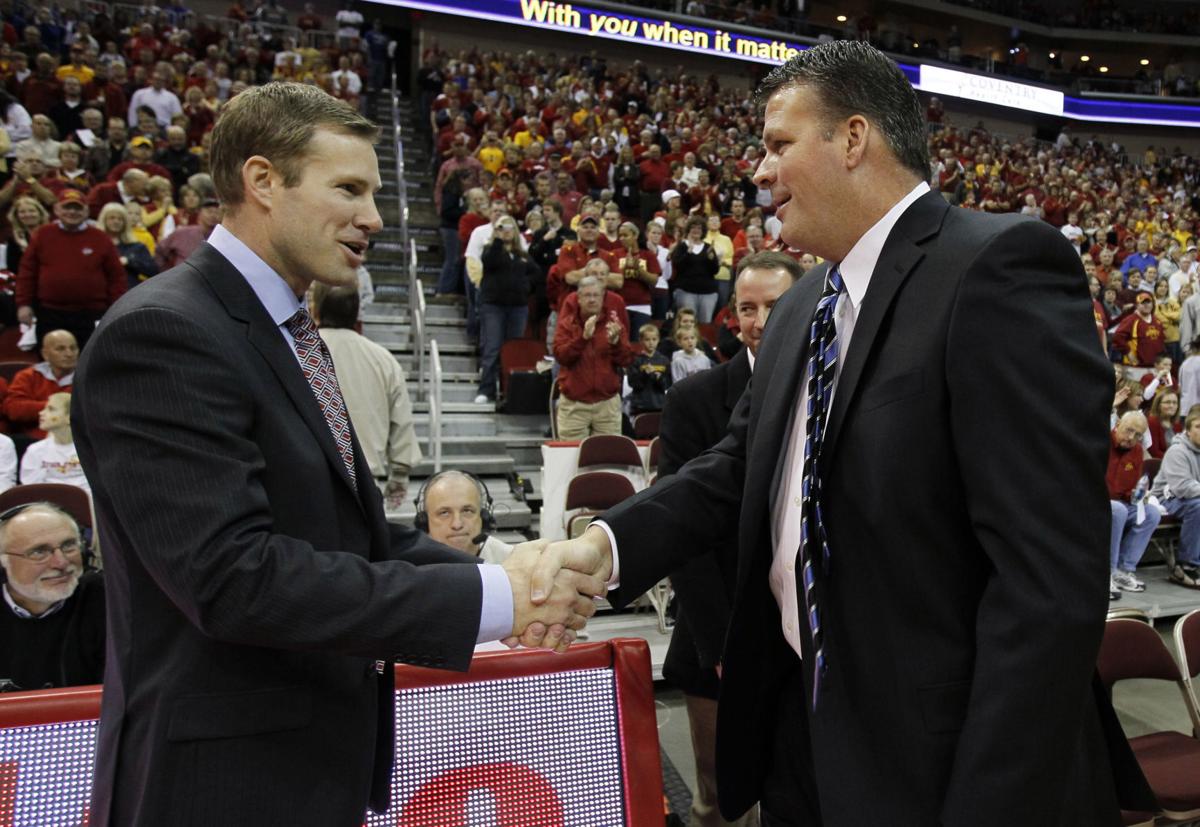 In this Nov. 21, 2010, photo, Iowa State coach Fred Hoiberg (left) greets Creighton coach Greg McDermott before an NCAA Tournament game in Des Moines, Iowa. Hoiberg succeeded McDermott at Iowa State, and will face him and the Bluejays for the first time as the Huskers' coach on Saturday. 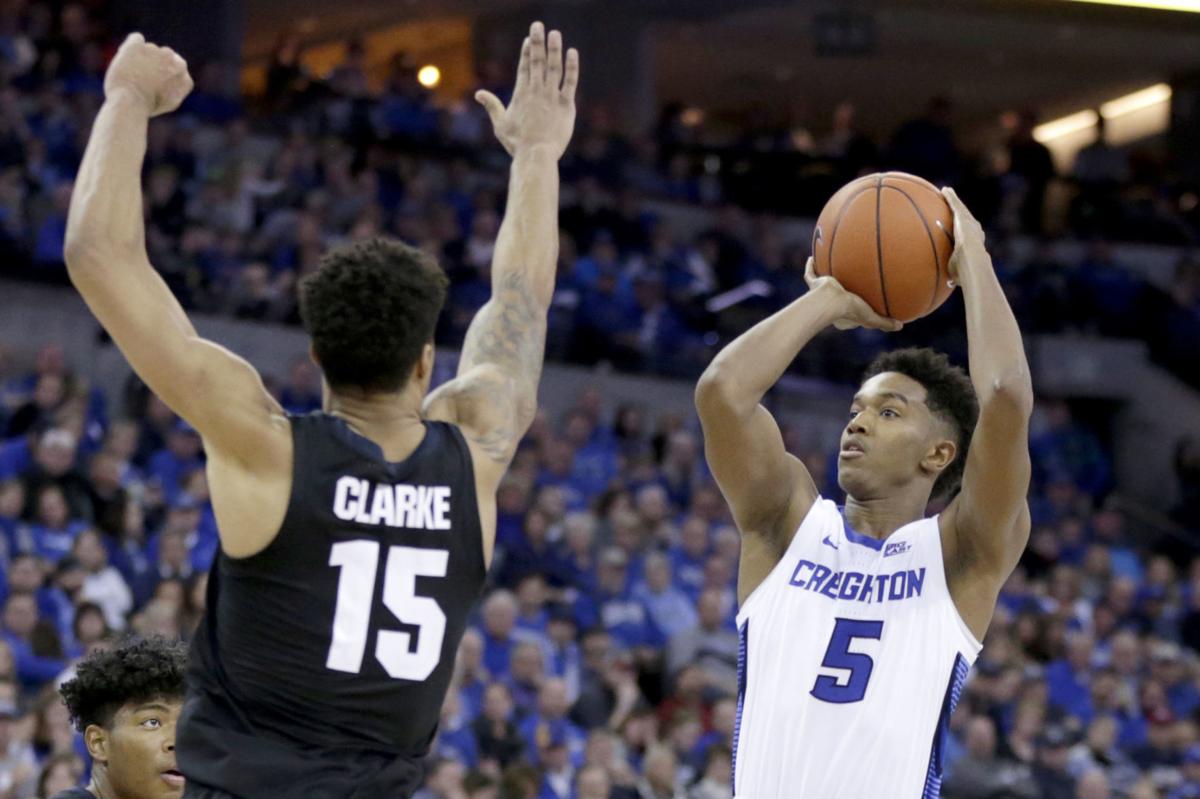 After years of friendly needling that turned a little less friendly at the end, the relationship between the men's basketball coaches at Nebraska and Creighton begins a new chapter Saturday.

Fred Hoiberg and the McDermott family will always be tied together in the basketball world. It was Hoiberg who took over at Iowa State in 2010 when Greg McDermott left the Cyclones to take the Creighton job. And a few years later, Hoiberg was coaching Doug McDermott in the NBA.

Now, of course, Hoiberg is on the sideline at Nebraska. And Saturday he'll get his first taste of a blue vs. red matchup that has tilted largely towards Omaha for the last two decades.

Tip is set for 1:30 p.m. Saturday at the CHI Health Center in Omaha.

"It's kind of funny how things work out. I guess we'll always be connected," Hoiberg said Friday. "It started when Dana Altman took the Oregon job and Greg left for Creighton and that opened up the job at Iowa State — which, had that not happened, I don't know if I would have gotten into this crazy business.

"But we'll always be connected in that way."

Hoiberg is 1-0 against McDermott, with his first Iowa State team taking down McDermott's Bluejays 91-88 in November 2010. The coaches employ similar styles, looking to push the pace and fire away from three-point range.

Now they'll scheme against each other in a series poised for a new era as Hoiberg installs his system in Lincoln and McDermott tweaks his in Omaha.

"Rivalry games are always more electric, and in my opinion, when I played in them, I thought they were fun," Hoiberg said. "I loved going in and playing on the road; an opportunity to go out there and have a great test of basketball, a test of will, and you have to be sharp in everything you do."

Hoiberg's had his share of success in rivalry games. He didn't seem to mind mentioning Friday he was 3-1 as a player for Iowa State against Iowa, and 4-1 against the Hawkeyes as Iowa State's coach.

This year's Nebraska-Creighton game is perhaps a little different. Most seem to understand the Huskers are in the early stages of a full-on rebuild. That doesn't mean Hoiberg won't be coaching to win Saturday or that the passions of each fan base won't burn just as hot.

"It's bragging rights in the state," Hoiberg said. "It will probably be a majority of blue (in the stands), but our fans will travel. … To play in (a rivalry) as a student-athlete and a coach, it's fun. I've tried to talk to our guys about going out there and enjoying and competing our butts off."

Right now the majority of Nebraska's roster probably doesn't fully grasp the atmosphere that envelops the two programs for one day every winter. With 14 new players, 10 of whom aren't from Nebraska, there's going to be an education in front of 18,000-plus in downtown Omaha.

Only Thorir Thorbjarnarson, who was on the court for all of 1 minute, 13 seconds in last year's 94-75 Nebraska win, has actually played against the Jays.

"The atmosphere is going to be electric and guys have to stay ready. It’s probably going to be a game of runs, so staying on your toes at all times," Thorbjarnarson said Friday. "I haven’t played a lot in the last couple years' games, but I remember sitting there and thinking I really want to play, I really want to be in those type of games. So, just looking forward to tomorrow."

Creighton dominated the game’s opening 16 minutes and cruised to a 95-76 win at the CHI Health Center Omaha.

As Nebraska prepares for Big Ten play, Husker fans may have to get used to beatings like the one NU endured against good-not-great Creighton.

A few months ago, it seemed Thorir Thorbjarnarson might be on his way out of the Nebraska men's basketball program as Fred Hoiberg and his coa…

In this Nov. 21, 2010, photo, Iowa State coach Fred Hoiberg (left) greets Creighton coach Greg McDermott before an NCAA Tournament game in Des Moines, Iowa. Hoiberg succeeded McDermott at Iowa State, and will face him and the Bluejays for the first time as the Huskers' coach on Saturday.