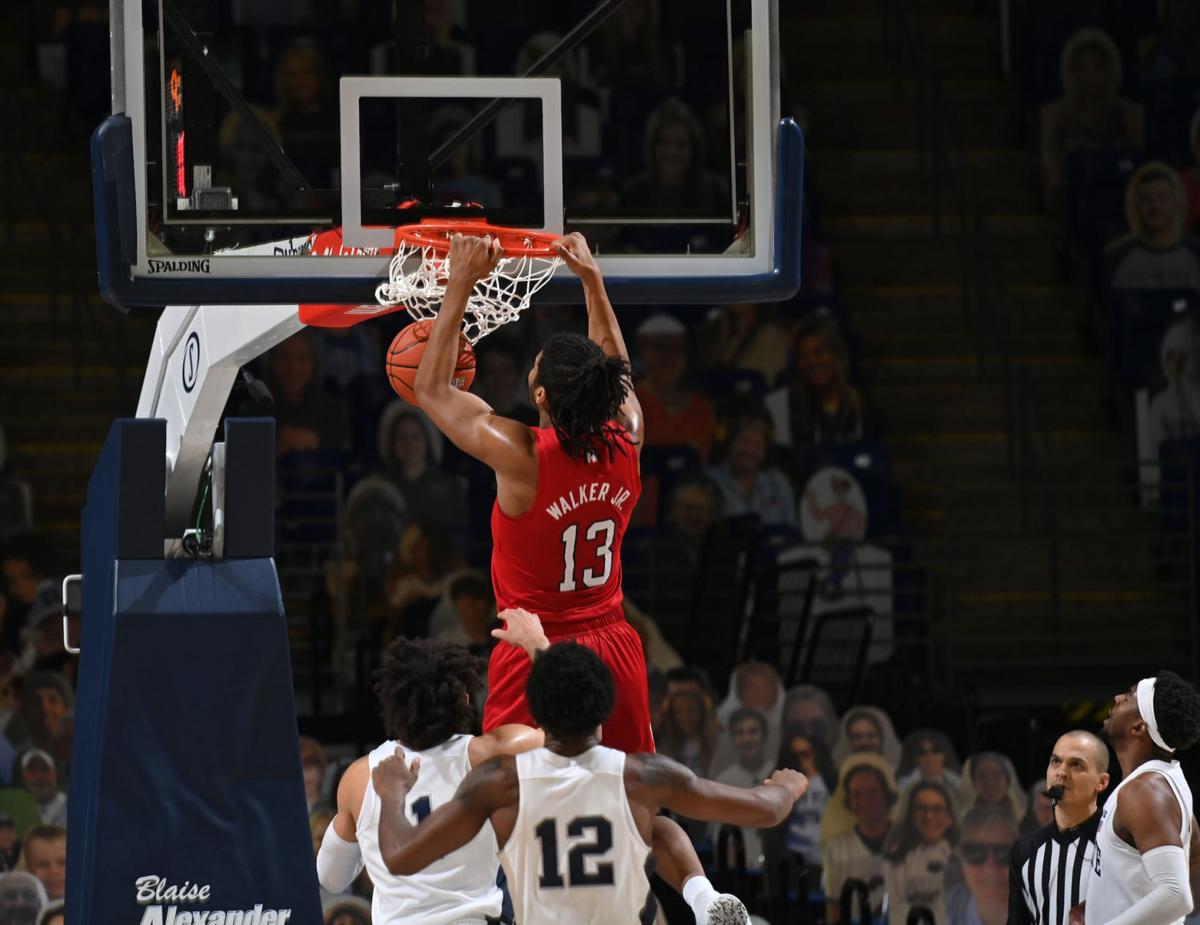 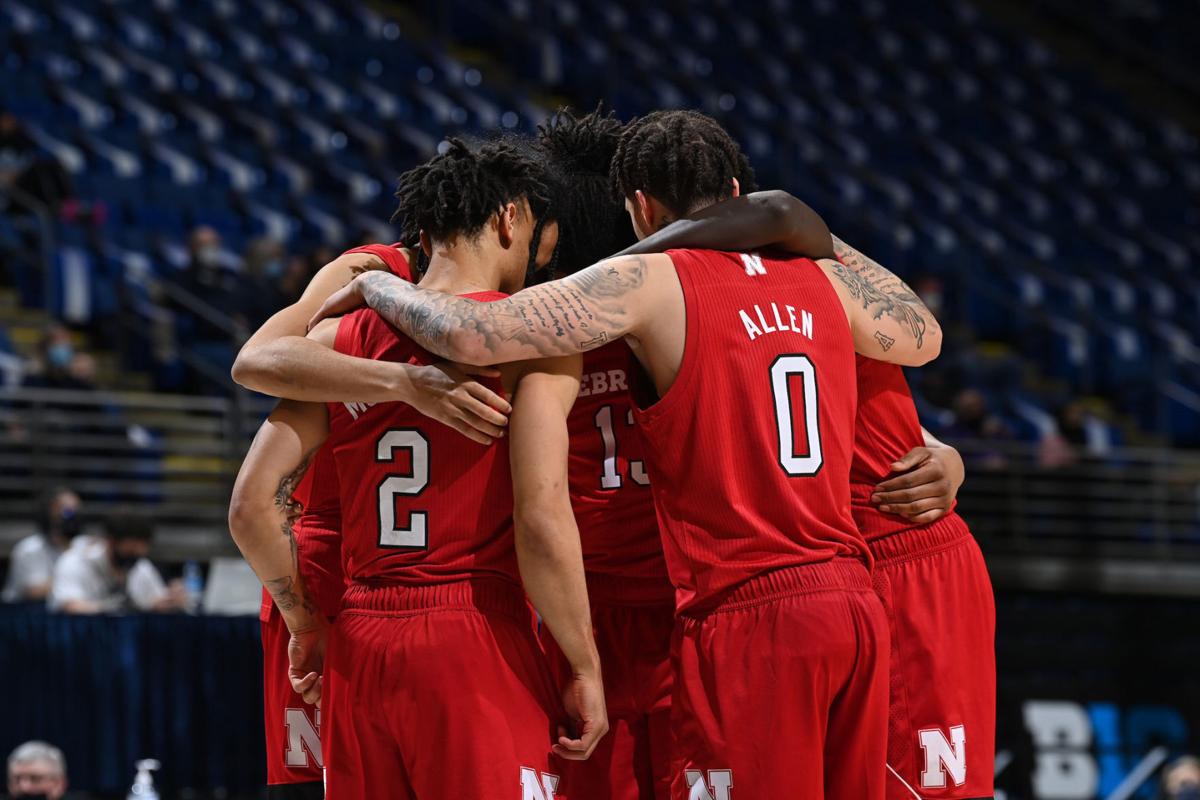 Nebraska players huddle during a stoppage of play in the first half against Penn State on Sunday in State College, Pa.

For eight of the longest minutes of the season, all the things Nebraska had done to build its 26-game Big Ten losing streak flashed before its eyes.

Behind efficient offense and solid defense, the Huskers had built an 11-point lead against Penn State with 8 minutes, 43 seconds left in the game. Then they spent the next eight minutes giving it all away. They didn't score for 8:31. They gave up a four-point play to cap a 12-0 Penn State run that put the Nittany Lions in front with two minutes left. They looked for all the world like they were ready to blow another one.

Thanks to two outstanding defensive plays from Derrick Walker and a tough layup from Teddy Allen with :12.3 left, NU ended its misery with a 62-61 win over Penn State on Sunday in State College, Pennsylvania.

'That's hard to do, man': Husker hoops presses on as schedule shows no signs of slowing down

"I'll be honest with you," Nebraska coach Fred Hoiberg said after winning a road game for the first time as Nebraska's coach. "If we wouldn't have found a way to get this one, that would have been two of the more devastating ones I've been a part of."

The victory ended a cornucopia of ignominious streaks for NU:

* Zero road wins versus Penn State since 2013, with five straight losses at the Bryce Jordan Center.

"Our biggest thing, especially towards the end, was let's just stick to us. Just be smart; let's make the right plays," said Walker, who finished with eight points and four rebounds. "We've been hungry for this and we felt like we should have got the last one. But let's just be smart, let's stay together.

"And I credit my guys today, because we never fell apart. As that stretch started coming down to the end, we came closer and closer together, and that's what helped us pull out that win."

But it was Walker, the transfer from Tennessee who only became eligible midway through the season, who made the game's biggest plays.

First, he forced a turnover with :20 left — after Penn State (7-10, 4-9) had already corralled two offensive rebounds while nursing a 61-60 lead — that led to Allen's go-ahead basket in traffic on the other end.

Then, as the clock died, it was Walker who poked the ball loose as Penn State attacked the basket looking for the game-winner.

The ball fell to McGowens, who was able to run out the clock, and the celebration was on.

Allen sprinted from the court up a tunnel at the Bryce Jordan Center with his hand in the air. The NU bench exploded as the buzzer sounded.

And finally, the Huskers could exhale.

"Our guys have battled and fought and competed in everything we've asked them to do," Hoiberg said. "I'm really happy for them. Reality is, yeah — we're 1-9 in league, but our guys have never stopped caring."

The victory came in Nebraska's fifth game over the past nine days, with back-to-back contests against Maryland up next on Tuesday and Wednesday.

But the Huskers planned to enjoy Saturday, at least for a little bit.

"I've told them: you guys are knocking on the door. Let's go kick that — word I can't use — down. And they went out and continued to fight," Hoiberg said. "That's the thing that I'm so proud of with this group is how they've continued to go out there and battle." 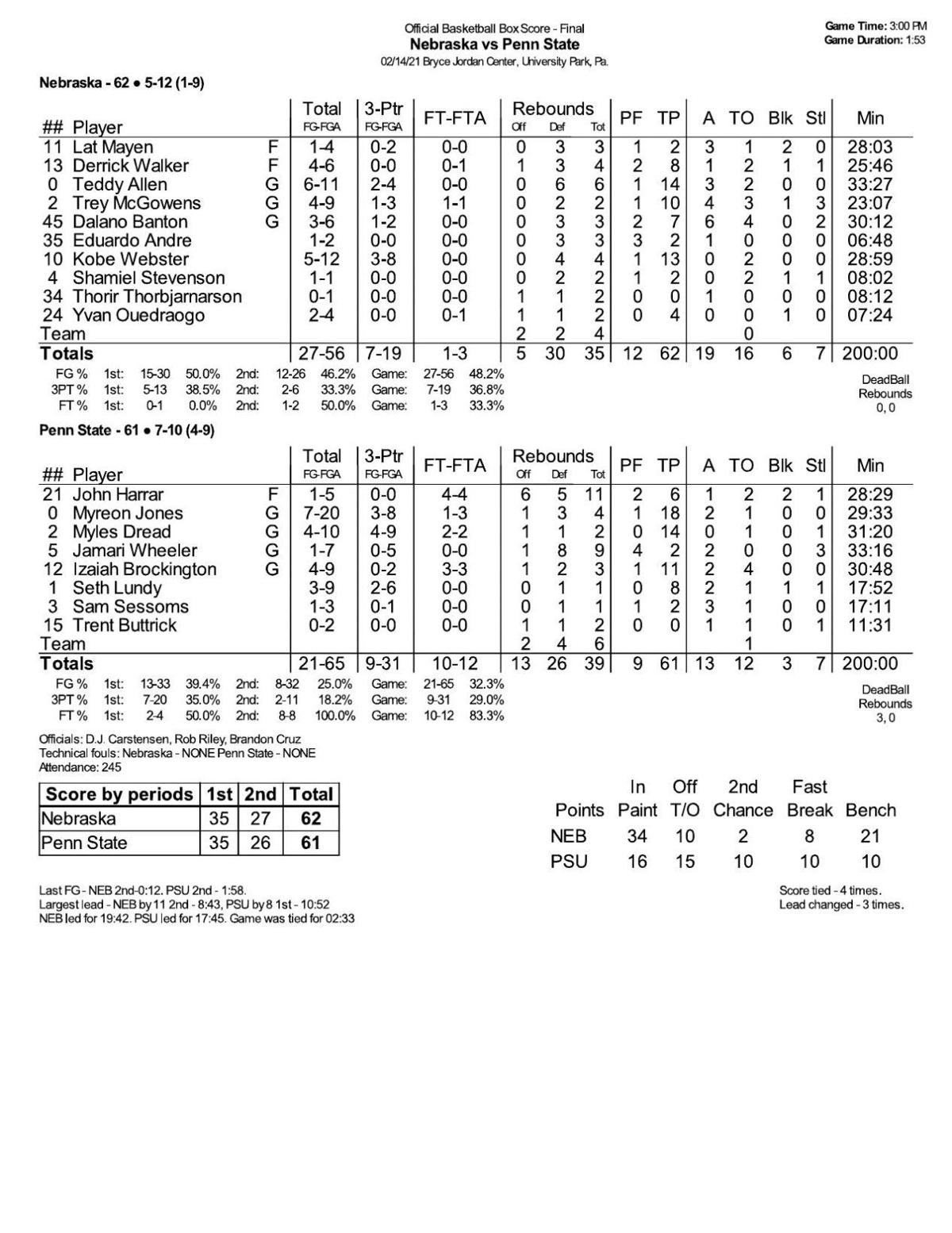 Ex-Husker sharp-shooter Cary Cochran on NU's poor free-throw shooting: "It's a matter of discipline. At the end of the day you have to have guts."

Amid 'incredibly difficult stretch,' Nebraska turns in best effort of season but falls to No. 6 Illini in OT

Fred Hoiberg was pleased with his team's effort but pointed out one thing in particular that "will keep me up tonight."

As promised, Nebraska slowed the pace. We break down the numbers, hear from Derrick Walker on defending Kofi Cockburn and more.

In search of answers on offense, Huskers may throttle back on one of nation's fastest tempos

Fred Hoiberg's preferred color has long been green. Green as in go. But now it might be time to pump the brakes on offense.

He played just 10 minutes and picked up five fouls.

'It's deflating': Another dud on offense as Huskers fall to No. 21 Wisconsin

NU scored 22 points in the first 10 minutes and built a nine-point lead. "And then we just stopped doing what was leading to success on the floor."

Most NCAA Tournament projections have Michigan and Ohio State as No. 1 seeds — the strength at the top of the Big Ten is the real deal.

In a familiar refrain, Husker hoops turns to defense in return to floor

Doc Sadler had to be sitting on his couch and smiling.

Nebraska players huddle during a stoppage of play in the first half against Penn State on Sunday in State College, Pa.