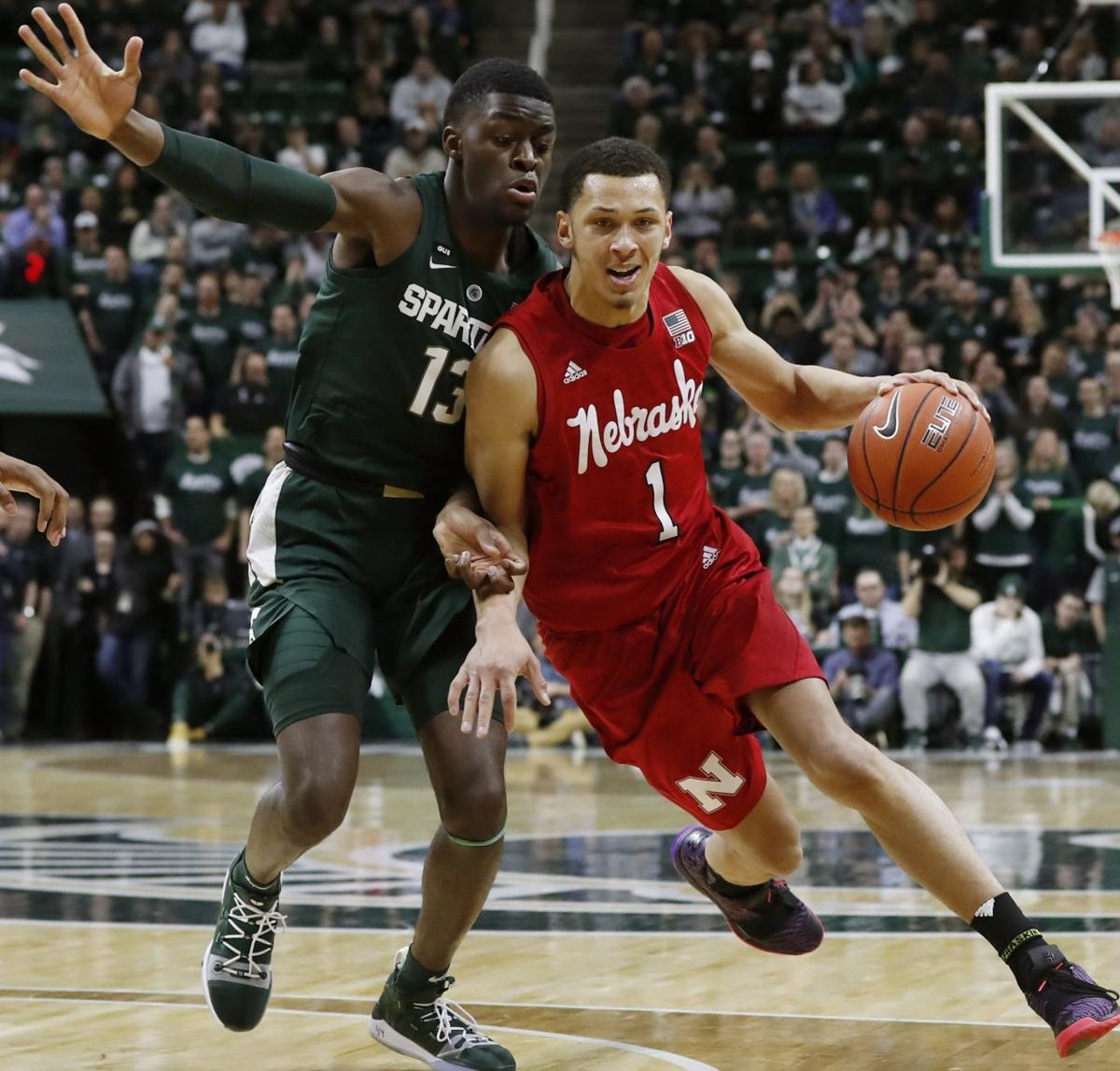 Nebraska guard Amir Harris (1) drives on Michigan State forward Gabe Brown (13) during the first half earlier in March in East Lansing, Mich. Harris denied reports Wednesday that he was leaving the program. 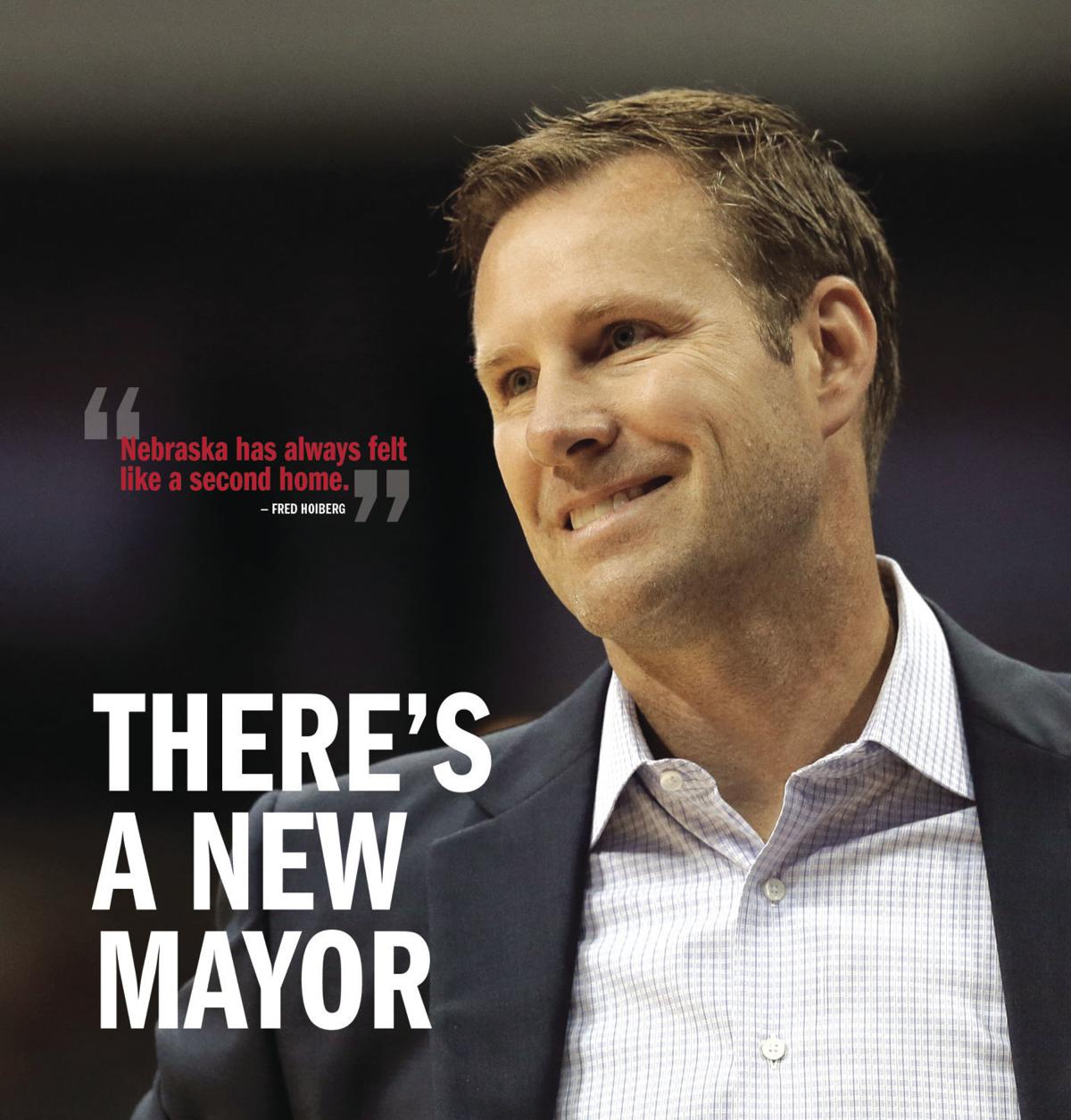 Fred Hoiberg was born in Lincoln and became a legend in Iowa. He aims to take Nebrasketball to places it's never been to before.

It appears the players on the Nebraska men's basketball team were prepared for a quick changing of the guard when it came to the coach who will be leading them.

"Bill Moos made it very clear that he had our backs and that the search went on for a long time," Harris said. "I wasn't exactly sure how fast this would all happen, but he prepared us that it was coming soon."

The junior, who averaged 11.8 points and 6.9 rebounds per game, will not hire an agent. This means, if he chose to, Roby could return to Nebraska for his senior season.

Roby did a similar thing one season ago, asking for an evaluation from the NBA's undergraduate advisory committee, but not working out for any teams.

While there is still a long way to go for both coach and players to build a relationship, the Hoiberg buzz of a new beginning has begun to take hold.

"It's exciting to hear that the athletic department is working so hard to make our program better," Harris said.

"(Bill) told us he was going to get a big-name guy, and he definitely delivered on that," Heiman said.

One thing is certain: Hoiberg's reputation is already having an impact on recruits.

"His NBA knowledge, his connections in the league are huge," said D'Andre Davis, a 2020 Husker recruit from Indianapolis. "My wanting to get to that level, to be able to play with a coach like that and in an NBA system, that attracts me.

"And playing in the Sweet 16, that's something that I want to play in, so him being a coach that can get us there attracts me, too."

"I am waiting to see if he will reach out to me. … Talk to him, see where I fit with his plan and see who he plans on bringing in and go from there," Green said Saturday. "I don't know much about him as a coach, but when I asked around, people said he was a great coach."

Made with Visme Infographic Maker

Green would appear to fit the mold of what Hoiberg looks for in a player. The high-scoring guard averaged 23.6 points, 5.7 rebounds and 5.3 assists while shooting nearly 55 percent from the field and 39 percent from three-point range this season for Western Nebraska Community College.

Another recruit who seems to fit in Hoiberg's system is Lincoln North Star standout Donovan Williams. Williams is committed for the class of 2020.

"I mean, my initial thought is that this is great," Williams said. "Couldn't have hired a better guy. The style of play his teams played with and the intensity at Iowa State, the Bulls and even the way he played … I have researched a ton about him, and this is great news.

"I am looking forward to talking with him and getting to know him better."

As for what it all means for Williams' commitment to NU, the high school junior will play the wait-and-see game, too.

"If (Hoiberg) likes my game and wants to keep the offer, then that's great," he said. "If not, I am in a really good place right now and I am just playing, focused on the summer and will wait and see where it goes from here."

Williams said he thinks most of the recruits will stay and hopefully no one transfers. Another recruit, from Creighton Prep, Akol Arop is following the same path.

"As (Hoiberg) takes the basketball team in a new direction, we are hoping for success and that he builds a good team," Arop said. "I had a very close relationship with Tim Miles and Michael Lewis and I really feel that God directed me in being part of the team.

"Now I hope to continue to grow in my faith and as a person with the new coach and direction for the team."

[ GALLERY: Reactions to Nebraska hiring Fred Hoiberg as its next head coach ]

They call him The Mayor

Nebraska investing and committing to Fred Hoiberg. I love the hire, a perfect fit for both parties. Any hire is all about the staff that follows. Hoiberg bringing Abdelmassih with him is huge, was with Hoiberg at Iowa State and is an excellent recruiter.

Now you're all in trouble

“Fred Hoiberg will be the next basketball coach at Nebraska”

Is it a home run hire?

Did someone say palpable buzz?

'Nebraska has always felt like a second home': Hoiberg hired as Huskers' next men's basketball coach

Fred Hoiberg will be the next coach of the Nebraska men’s basketball team, sources confirmed to the Journal Star on Saturday morning. The university announced the move in a news release shortly after 3 p.m. Saturday afternoon.  Hoiberg will be introduced at a 3 p.m. Tuesday news conference at Memorial Stadium.

At its core, Fred Hoiberg's offense isn't all that different from what Scott Frost is running over at Memorial Stadium — push the tempo, spread the defense across the playing surface, distribute the ball to attack favorable one-on-one matchups, and be unafraid to take deep shots on a regular basis.

Husker Extra Podcast: Recapping a significant week in Nebraska basketball and the latest on Fred Hoiberg

Steven M. Sipple, Chris Basnett and Parker Gabriel run down the week in Nebraska basketball, from Tim Miles' ouster on Tuesday to the timeline…

The Hoiberg timeline: From Iowa 'Mr. Basketball' to coaching the Bulls at PBA

A look at the basketball life of Nebraska's new men's basketball coach.

When it comes to raising the bar of its men's basketball program, Nebraska is all business.

For some long-time Nebraska hoops fans, this all may seem like a dream. "You're getting a guy (in Fred Hoiberg) who's proven, a guy who carries a national name," says Cary Cochran of Minden, Iowa, who ended his college career in 2002 as Nebraska's all-time leading three-point shooter. "He's a guy who adds credibility." A ton of it, actually.

Now that the minor detail of hiring a head coach is out of the way, Nebraska basketball can begin to turn its attention to just what kind of r…

Georges Niang probably doesn't miss too many chances to poke at the Iowa Hawkeyes and their fans.

On Saturday, Donovan Williams shared his excitement with the rest of Lincoln when Nebraska hired Fred Hoiberg as the 28th men's head basketbal…

Saturday is a big recruiting day at Memorial Stadium.

Donovan Williams had a wide-open lane to the basket in his AAU game this past weekend in Arkansas, and when the Husker commit and Lincoln Nort…

Nebraska guard Amir Harris (1) drives on Michigan State forward Gabe Brown (13) during the first half earlier in March in East Lansing, Mich. Harris denied reports Wednesday that he was leaving the program.

Fred Hoiberg was born in Lincoln and became a legend in Iowa. He aims to take Nebrasketball to places it's never been to before.