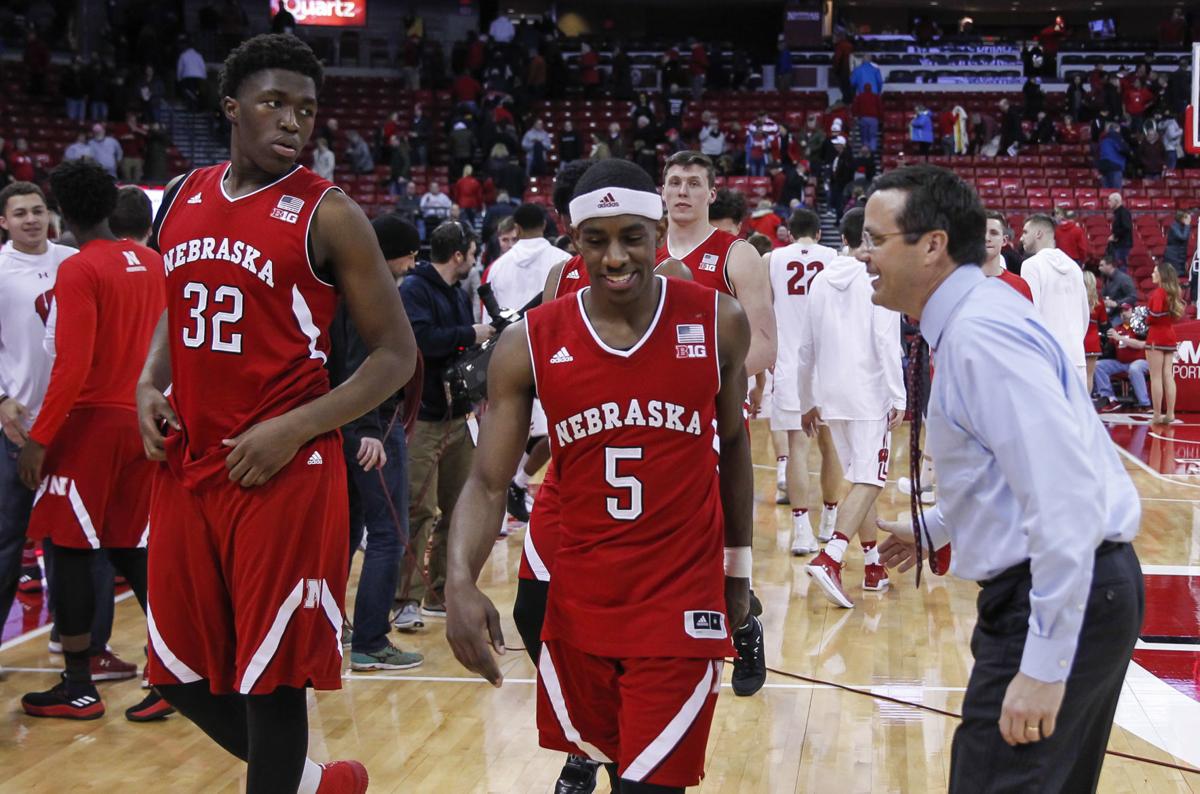 Nebraska head coach Tim Miles reacts to his players Jordy Tshimanga (32) and Glynn Watson (5) after Nebraska's 74-63 win over Wisconsin last month in Madison, Wis. The Huskers are playing their final Big Ten road game of the season Sunday at Illinois.

This slogan will appear on T-shirts the Nebraska men's basketball players will wear Saturday before their game against Rutgers at Pinnacle Bank Arena.

One by one, members of the Nebraska men's basketball team shared a unified message: "Hate will never win."

Friday morning, Husker coach Tim Miles said his team will continue to work to spread a positive message in response to videos that surfaced earlier this week of a University of Nebraska-Lincoln student claiming to be "the most active white nationalist in the Nebraska area."

"What I’m proud of is, they’re taking a strong stand in putting a positive message out against hate, racism, prejudice. And they’re having a unified message that, they want to include other student-athletes, and they want to include the students at UNL on this whole process going forward," Miles said. "This is not a one-time thing. This is something we want to continue, to champion that cause, and I’m proud of the guys for that."

Miles himself tweeted a screen shot of his players' tweets with the message "I love these young men!"

I love these young men! https://t.co/6rxuAsrOWH

Early Friday afternoon, Miles was flanked by two of his players at a news conference originally scheduled to preview Saturday's home game against Rutgers. Instead, senior guard Evan Taylor and junior guard Glynn Watson spoke thoughtfully on their team's reaction to the video.

Taylor, a team captain, opened by reading a statement.

"In light of the recent events on campus regarding hate speech, on behalf of the Nebraska basketball team, we would like to deliver a message against racism that encourages positivity. We encourage all of the Husker athletes and student body to get behind us," Taylor said. "The message that we want to send is that hate never wins, and to spread love."

Wednesday, Miles attended a rally organized by the group UNL Against Hate outside the Nebraska Union.

"I think it just shows how much Coach Miles has our back," Taylor said. "For him to take time out of his day, especially in the midst of our season, take a couple hours out of his day to go hear something that doesn’t really concern him, but it concerns his players, it just lets us know that he has our back."

The original video, featuring UNL student Daniel Kleve in a Google Hangout with other white nationalists, depicted him discussing his desire to be violent.

Anger over that video has continued to simmer on campus this week, particularly among students of color, even as administrators and safety officials have sought to assure students that they reject Kleve’s ideology and put student safety at the forefront.

“(Students) are absolutely dismayed at the fact that violence can be talked about in this environment, but yet the response appears to be … academic, it’s intellectual, not feelings and heart and understanding what students are having to think about and be concerned about every day,” said Gwendolyn Combs, an associate professor of management at the College of Business.

Reshell Ray, an associate director of student involvement on East Campus, said the existence of racism was not new to UNL or to the country. She said faculty were standing in solidarity with students against bigotry and hatred.

“Fear will not intimidate us and we will see this institution continue,” Ray said. “For 30 years I’ve been on this campus and for 30 more will I stand to continue to fight for the rights of our students.”

The Husker players plan to wear T-shirts with the "Hate will never win" slogan during warmups for Saturday's game against Rutgers, and the team is in the process of putting together a video that will be shown either before or during a timeout in Saturday's game.

Miles said Friday the players were contributing to the video, in cooperation with UNL's multicultural groups.

Miles said he first noticed something was bothering his team after Nebraska's Tuesday win at Minnesota, a huge victory in bolstering the team's NCAA Tournament hopes.

Instead of a celebratory locker room, the coach found his players to be subdued.

In the minutes after the game, Miles received text messages from Anton Gill and Taylor requesting a team meeting.

The team met on the plane ride home from Minneapolis to discuss the issue. Among the responses discussed was a boycott of the Rutgers game, before the team voted "overwhelmingly" to play.

After returning to Lincoln, the team met with NU system president Hank Bounds and other school officials to voice their concerns.

“Yesterday Bill Moos asked me to join him in speaking with Husker basketball players who, like many members of our community, are concerned about the white nationalist ideology and activities of one of our students. I share the disgust and anger over these reprehensible views, which are not in keeping with my personal values or those of the University of Nebraska," Bounds said in the statement. "I have been monitoring this situation closely with appropriate University authorities and we are carefully reviewing our options. The safety of our students, faculty and staff is my highest priority.

"The statements of unity by our players later in the evening showed remarkable maturity and grace. I could not be prouder of these young men. That — not the hatred and bigotry espoused by a few — is what the University of Nebraska stands for. That's the ideal we're going to continue to work toward, every day, any way we can."

The University of Nebraska-Lincoln won’t expel a student claiming to be “the most active white nationalist in the Nebraska area,” Chancellor R…

'We have a long ways to go': UNL students rally against 'white nationalist' classmate

Nebraska's basketball players wanted to do something.

Isaiah Roby got past his defender, planted his right foot for takeoff, and just sort of kept rising.

Since starting and playing 12 minutes Jan. 12 in Nebraska's loss at Penn State, graduate transfer forward Duby Okeke had played a total of 13 …

Tim Miles hurriedly brushed his teeth as all hell was breaking loose in his world — at least that's the way it felt.

A look at storylines and lineups for Tuesday's Nebrasketball game against the Terrapins.

Huskers saddle up again with next opportunity against Maryland

As fans and self-styled prognosticators ramp up the hand-wringing over the Nebraska men's NCAA Tournament chances, all the Huskers can do is g…

University of Nebraska-Lincoln students at a Wednesday rally called on each other to shift their focus from a single, self-described white nat…

Husker athletic director Bill Moos made it clear he wants Tim Miles' program to improve on its success of 2017-18. That was good to hear. That sounds like the new boss ramping up expectations without sounding rash about it.

UNL Chancellor Green: 'Future must be about action' in addressing racism, inequality

Nebraska head coach Tim Miles reacts to his players Jordy Tshimanga (32) and Glynn Watson (5) after Nebraska's 74-63 win over Wisconsin last month in Madison, Wis. The Huskers are playing their final Big Ten road game of the season Sunday at Illinois.

This slogan will appear on T-shirts the Nebraska men's basketball players will wear Saturday before their game against Rutgers at Pinnacle Bank Arena.