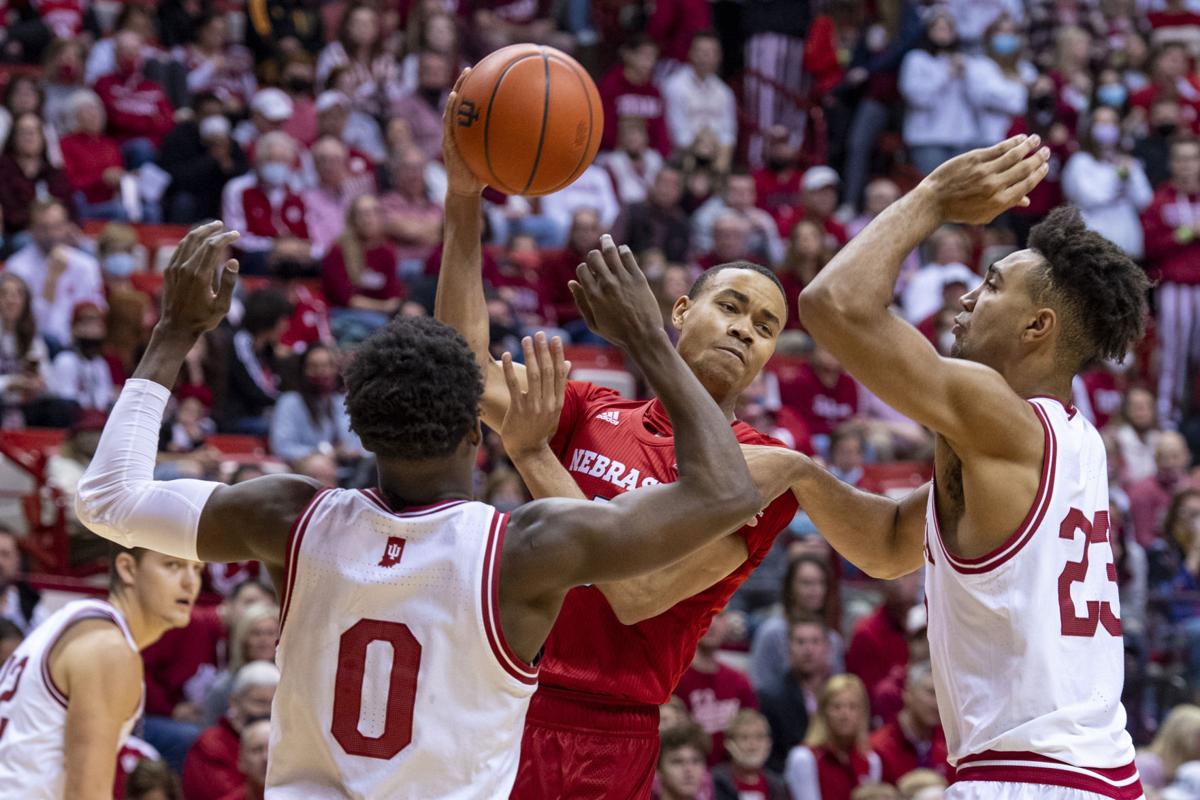 Nebraska guard Bryce McGowens attempts to pass the ball between Indiana's Xavier Johnson (0) and Trayce Jackson-Davis (23) during the first half, Dec. 4, in Bloomington, Ind. 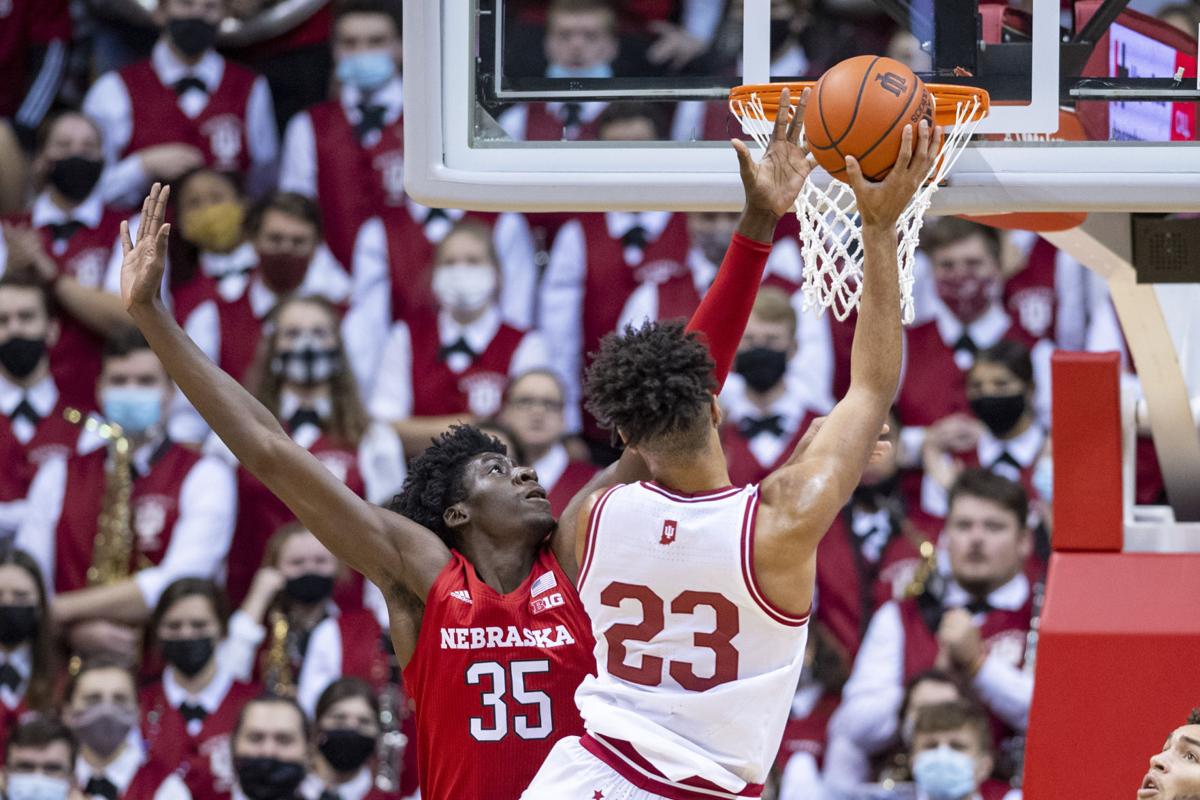 Nebraska's Eduardo Andre (35) attempts to block a shot by Indiana's Trayce Jackson-Davis during the first half Saturday in Bloomington, Ind. 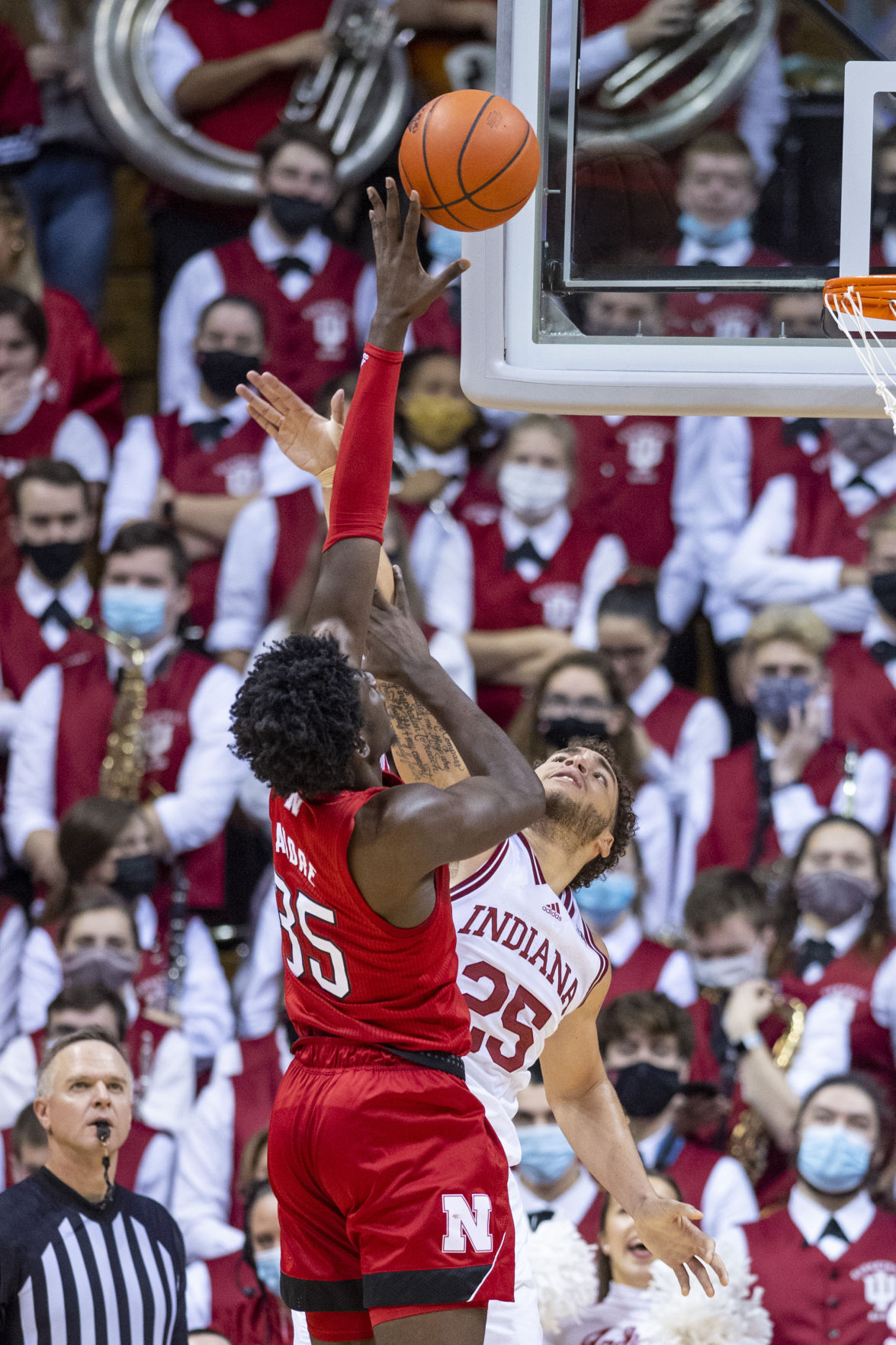 Indiana's Race Thompson (25) defends as Nebraska's Eduardo Andre takes a shot during the second half Saturday in Bloomington, Ind.

A promising start quickly disappeared in a flurry of missed three-pointers as the Nebraska men's basketball team lost to Indiana 68-55 Saturday at Assembly Hall in Bloomington, Indiana.

But Indiana (7-1, 1-0) turned to its bench, rallying to take the lead with all five starters sitting on the sideline. The Hoosiers' reserves scored 18 of the team's final 20 points of the half.

Coming into the game shooting less than 28% from three-point land, the Huskers finished just 5-for-22 from beyond the arc, at one point missing 14 consecutive attempts and sitting at 1-for-16 with more than nine minutes still to play before making four of their final six in the game's final six minutes.

"Whether it was legs not being back from the other night or whatever it was, we just could not convert whenever we had opportunity and had open looks," NU coach Fred Hoiberg said on his postgame radio show on the Husker Radio Network.

The ice-cold offensive effort wasted a good defensive day from the Huskers, who held Indiana to 40% shooting from the floor and kept star forward Trayce Jackson-Davis to 14 points, eight below his season average.

"Half-court defense was the best it's been all year. That's certainly something we can build off of," Hoiberg said. "We hung in there when the ball wasn't going in … I thought our effort was there, especially on the defensive end, and that's a step we really needed to take."

After drawing within 26-24 on a Derrick Walker layup to open the second half, Nebraska gave up a three-pointer on the other end and threw a lazy inbound pass that was stolen and laid in to put the Hoosiers up seven. Nebraska got no closer than five points the rest of the way, and no closer than seven for the game's final 16 minutes.

Alonzo Verge was the only Husker in double figures, scoring 15 points on 6-for-13 shooting to go with five rebounds, three assists and six turnovers.

Bryce McGowens was held to eight points on 3-for-14 shooting, and added five rebounds. The freshman's final points came with 6:33 left in the first half. Walker also scored eight points, finishing 4-of-5 from the field.

Jackson-Davis' 14 points led Indiana, and he added seven rebounds, four blocked shots and three steals. Tamar Bates came off the bench to score 11 of his 13 points in the first half, and Race Thompson had 11 points and 11 rebounds for the Hoosiers.

Things won't get any easier for NU after the weekend. The Huskers host Michigan on Tuesday. 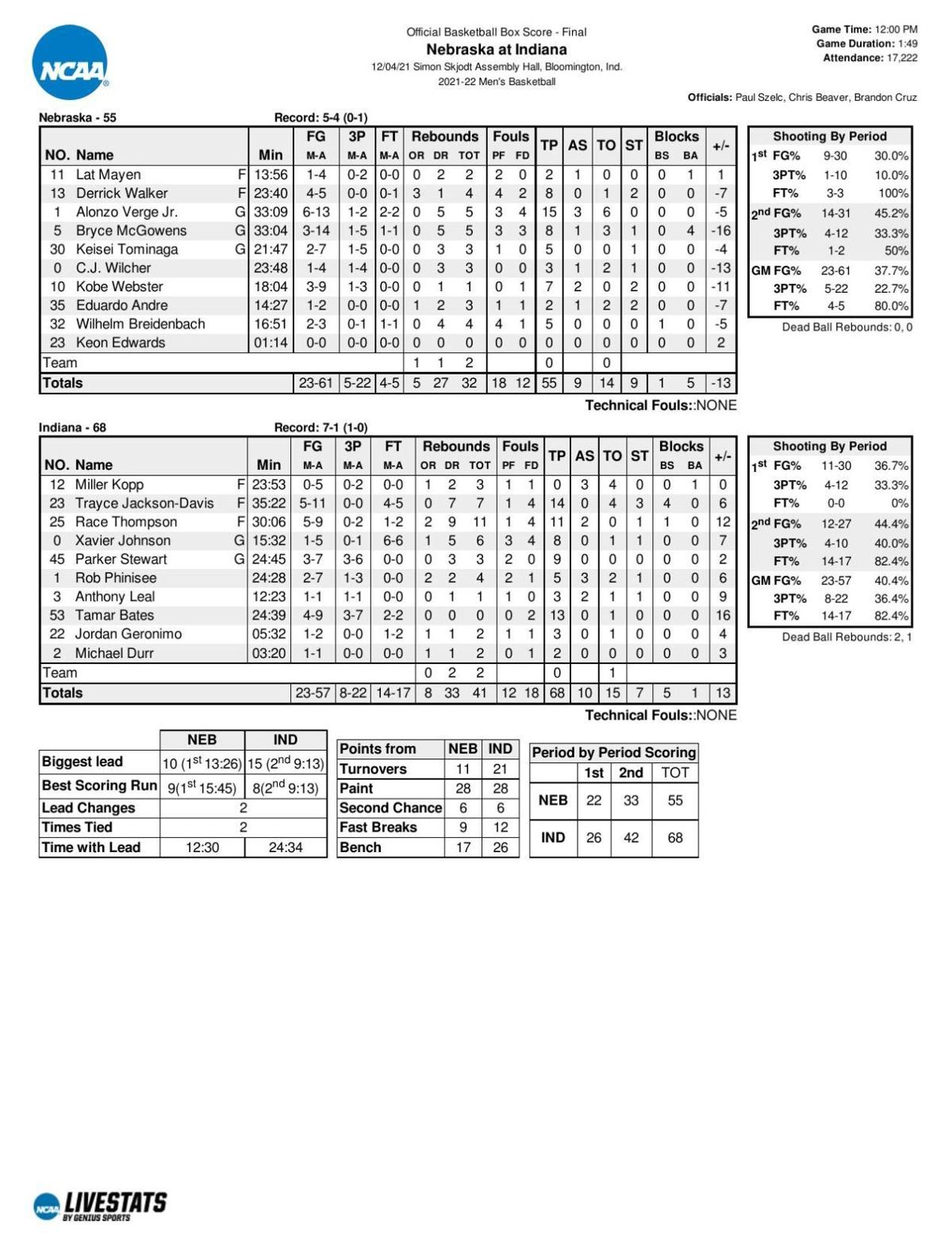 Husker hoops ready to take show on the road, seeking to reverse fortunes away from Lincoln

Nebraska sets its sights on improving an unsightly road record under Fred Hoiberg, and it can take the first step against a power conference team.

Bryce McGowens is starting to put together well-rounded stat lines as he becomes more comfortable. Also, who's the team's "Mr. Reliable?"

At practice on Sunday, the Nebraska coach climbed a ladder and placed two basketballs inside the hoop as part of a visualization exercise.

We take a closer look at the Nebraska men's basketball team's matchup against Michigan on Tuesday.

“As both a colleague and friend, his health is our priority, and we will support him throughout this process," said Fred Hoiberg in a statement.

Fred Hoiberg was honest in his assessment of his team’s play against Michigan, one of the worst losses since he took over the program.

Nebraska's coaches talked in the locker room Tuesday night about changing the way Nebraska plays offensively in order to find some flow.

With trip to Atlanta looming, Husker hoops dealing with illness running through its roster

"Other than that, we're great," Fred Hoiberg cracked after revealing his team will be shorthanded in Atlanta due to illness.

Nebraska guard Bryce McGowens attempts to pass the ball between Indiana's Xavier Johnson (0) and Trayce Jackson-Davis (23) during the first half, Dec. 4, in Bloomington, Ind.

Nebraska's Eduardo Andre (35) attempts to block a shot by Indiana's Trayce Jackson-Davis during the first half Saturday in Bloomington, Ind.

Indiana's Race Thompson (25) defends as Nebraska's Eduardo Andre takes a shot during the second half Saturday in Bloomington, Ind.