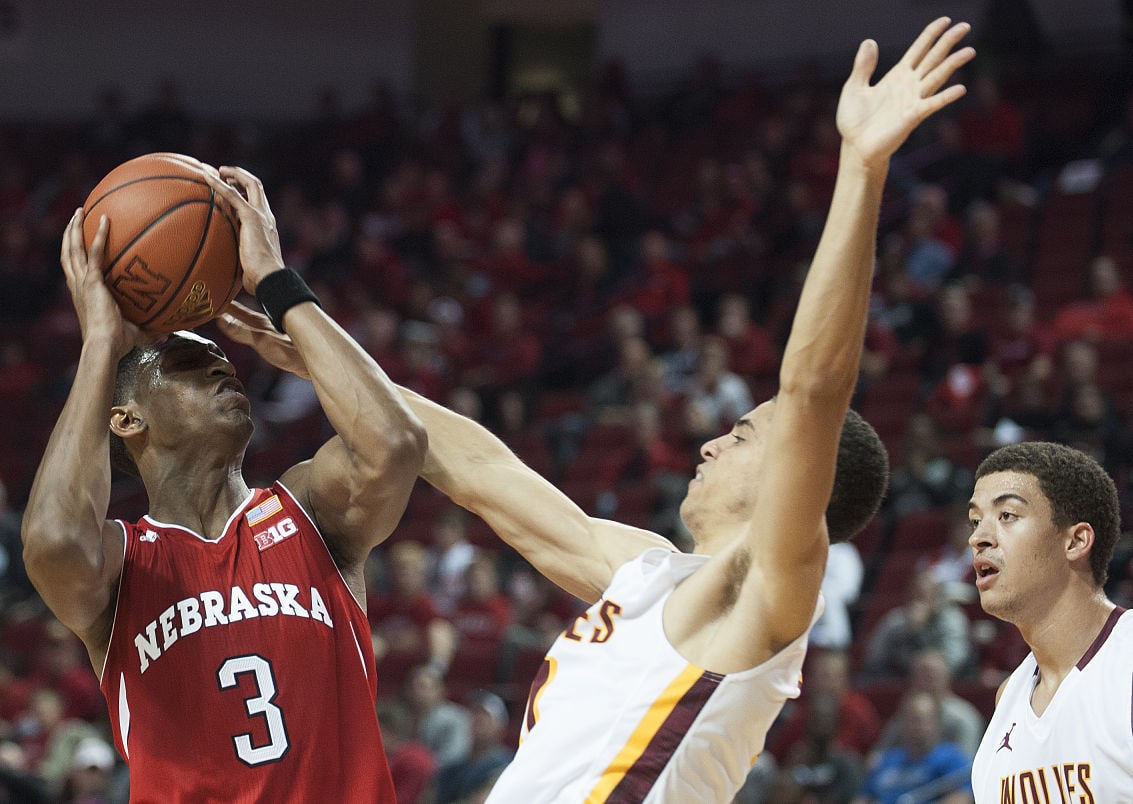 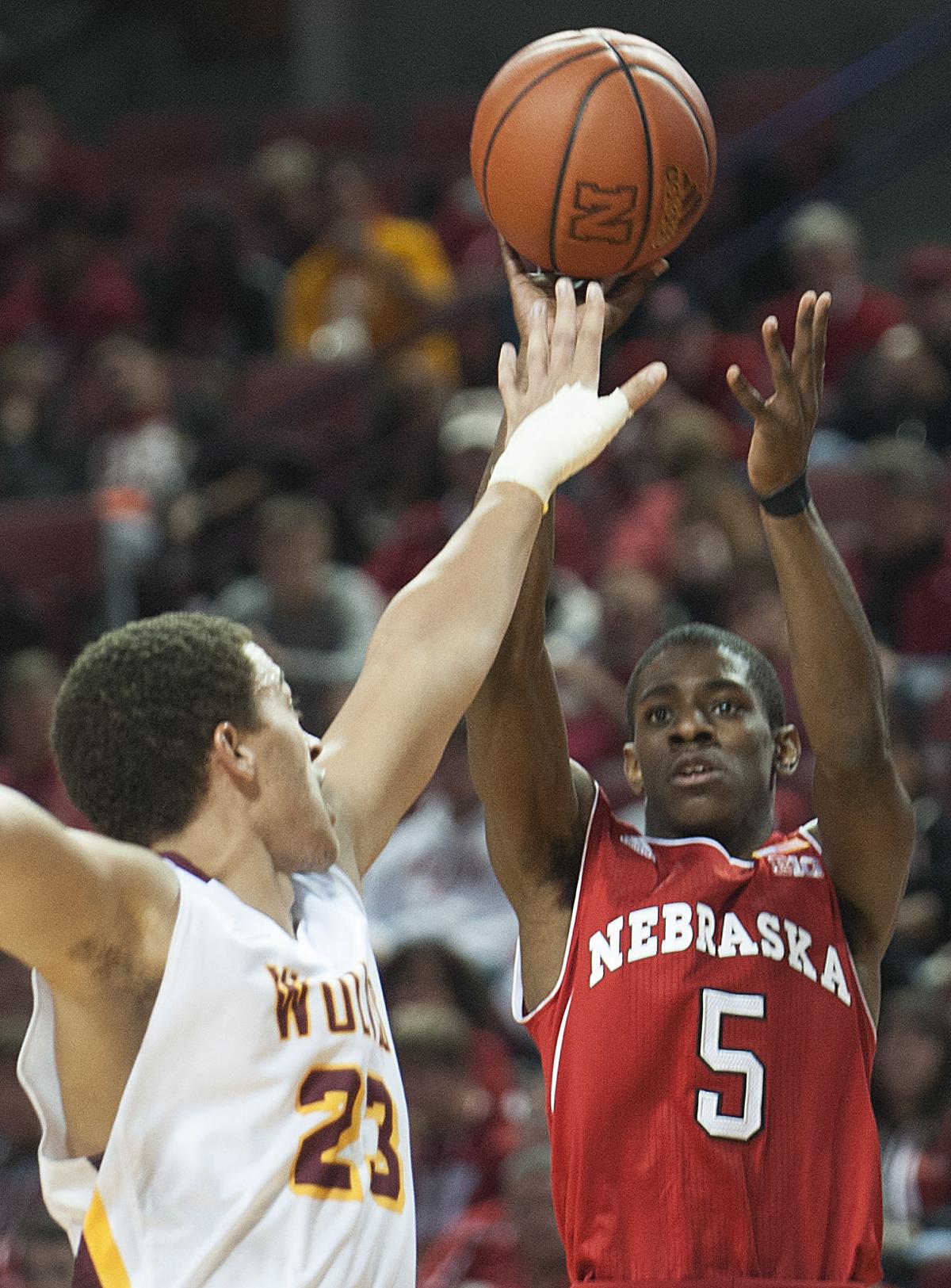 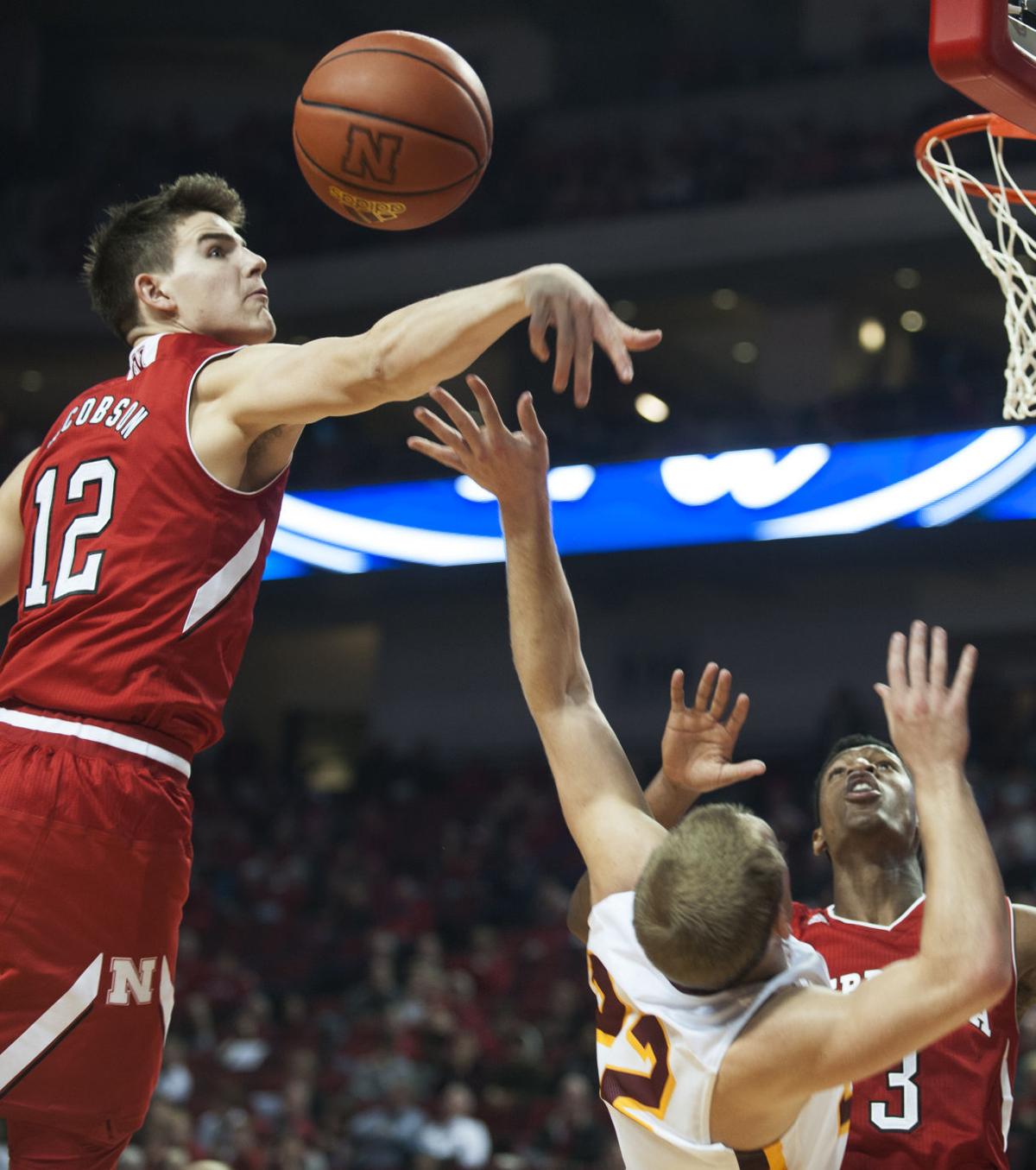 Nebraska's Michael Jacobson (12) blocks a shot by Northern State's Darin Peterka in the first half Monday at Pinnacle Bank Arena.

Not until Sunday night after practice did Andrew White realize Nebraska’s basketball game against Northern State wouldn’t count for real.

That’s how focused and eager the Kansas transfer, after sitting out last season, was for his Husker debut.

“I was revved up for this like it was an actual game,” White said. “I saw Northern State, and I was preparing for it like a game. I honestly didn’t know this was an exhibition.”

Real game or no, White lived up to expectations, albeit against a lesser foe.

White scored 18 points on 6-of-10 shooting and paced a stout Nebraska defense, as the Huskers overwhelmed Northern State 95-42 on Monday night before 8,194 fans at Pinnacle Bank Arena.

“That’s just kind of where my focus is, regardless of who you’re playing, regardless if you’re at home or on the road, you have to be ready to play,” White said. “Regardless of where you are, you want to come and show what you have.”

White hit one of his two three-pointers to begin a 20-0 run in the first half after Northern State trailed 12-10 with 13:12 remaining.

“I was just happy he went out and was aggressive,” Nebraska coach Tim Miles said. “He didn’t really try to do anything he can’t do. He just went out and played."

Shavon Shields and Tai Webster scored 14 points apiece, and freshman Jack McVeigh had 11, all in the second half, as all but one Husker scored.

“I think this game was a good opportunity to see how versatile our team can be,” White said. “We had a pretty balanced effort on the scoring and defensive end tonight, which is encouraging. Specifically, I think Tai Webster really improved a lot. He’s going to be an ‘X’ factor for us.”

Andrew White III with a breakaway dunk for @HuskerHoops! https://t.co/3cMuyUldPS

Webster, a junior guard, was 5-of-7 from the field, scoring mostly on penetration, something Nebraska had little trouble doing overall against a less-athletic Northern State team.

“I thought Tai was locked-in. He’s an elite athlete,” Miles said. “I was happy to see him get some things in transition.”

Nebraska shot 51.5 percent, including 4-of-13 on three-pointers, and displayed much better ball movement and passing than it displayed much of last season.

“Our big emphasis was moving the ball,” White said. “There were a lot of guys who could’ve gone and got shots individually tonight, but we still wanted to stick to our principles and move the ball, and let everybody get involved.”

Northern State, an NCAA Division II school from South Dakota, was returning two starters from a 23-win team. The Wolves, who lost by four points to Briar Cliff on Saturday night, were just 1-of-33 on three-pointers against Nebraska. The one make came from roughly 30 feet, and was followed with 32 consecutive misses.

“Even though the score was a little lopsided, this team really did move the ball, crashed for rebounds. It was a better team than the score indicated,” White said. “We really wanted to focus on coming out and defending the ball really well early, so we could give ourselves a little cushion.”

The Husker freshmen showed flashes, mixed with some nerves. The surprise performance came from 6-foot-8, 275-pound freshman Tanner Borchardt. The Gothenburg native, who joined the team as a walk-on less than three weeks ago, had four points, three rebounds, a block and an assist in five minutes.

Of the scholarship freshmen, Miles said point guard Glynn Watson, who came off the bench, looked especially tight. He was 1-of-6 shooting with two turnovers and an assist.

“I explained to Glynn how to relax his entire body during one of the timeouts. I don’t know if he was buying it, but I thought we needed to deflate the air out of him,” Miles said.

“Even though he hit a bucket, I don’t think he ever really settled in. But he will. You could see flashes of him of what we see in him.”

Nebraska's Michael Jacobson (12) blocks a shot by Northern State's Darin Peterka in the first half Monday at Pinnacle Bank Arena.