Chris Basnett: Fans are back for hoops, and Hoiberg promises them something to cheer for in 2020-21
0 Comments
Share this

Only time will tell what this version of the Nebraska men’s basketball team will be.

But the Huskers sure look like they’re going to be fun.

Keisei Tominaga and Alonzo Verge Jr. had the Pinnacle Bank Arena crowd in the palms of their hands, and most everyone got their chance to join the party as NU welcomed fans back to PBA for the first time since March of 2020 at Opening Night with Husker Hoops.

NU women’s coach Amy Williams told the crowd of roughly 6,500 she had tears in her eyes seeing fans back in The Vault for the first time in more than a year and a half.

“I have chills, having this phenomenal fan base back here in Pinnacle Bank Arena," Williams told the crowd before her team scrimmaged.

The men’s team was introduced after the women’s scrimmage, with freshman Bryce McGowens coming out last. The cheer for the five-star was rivaled only by that for Tominaga, the Japanese import who has impressed in workouts.

"This is one of the more welcome sights I've ever seen, to have the fans back in Pinnacle Bank Arena," NU coach Fred Hoiberg said. "You are absolutely going to love this team. It's a fun team, we have upgraded at every position. I promise you: this is going to be a team that is fun to cheer for."

For one night, with defense optional, the Huskers lived up to Hoiberg’s promise.

Verge got cooking early, with nine points in the first seven minutes. In one sequence, he sent Kobe Webster stumbling after a crossover, hit the jumper, stole the ball from Webster on the other end, and got it ahead to Bryce McGowens, who tossed the ball off the backboard for his older brother Trey to finish.

Then Tominaga took his turn.

He hit a three from the First National Bank Logo about 26 feet from the basket for his first points. A few minutes later, he kept Verge in front of him as Verge tried to victimize another teammate, then came down and hit a three, and hit another one possession later to bring the crowd to its feet.

He pulled up from the Panhandle in the Nebraska silhouette at midcourt and drained one. He threw down a dunk late in the scrimmage.

Afterwards he did a television interview for the Japanese media.

Tominaga’s White team beat Verge’s Red squad 69-55 in the 20-minute workout, with everyone but Lat Mayen, who watched from the bench, getting in on the action. Mayen sat as he continues to deal with a back issue.

Friday was a celebration, both for the return of basketball for two programs that should be improved this season, and the fans who filled much of the lower bowl on a busy Friday night to watch them.

Rothstein can be prone to a bit of hyperbole from time to time. But he also watched Nebraska practice behind closed doors earlier Friday, and delivered a message to the crowd.

"I can tell you, from what I saw earlier today, and what you will see in a little while, Nebraska has the tools to have a dog in the fight," Rothstein said.

Rapper G Herbo arrived just as the men began warming up, taking a seat courtside with his entourage. He later performed for the crowd, joined on stage by members of both hoops squads.

By that point, the entertainment was well underway. Webster made a half-court shot in warmups. Tominaga made one while sitting in the courtside seats.

And those in PBA were happy to watch.

Before rapper G Herbo takes the stage, Huskers look to show off their stars in front of PBA crowd

There's a lot of ways to look at Opening Night, but Lat Mayen might sum it up best. Plus, a look at the touted group of recruits attending.

This offseason was different for the Nebraska men's basketball team this year in that it actually had an offseason.

After gutting through an injury and grinding through months of rehab, Lakes ready to splash for Husker hoops

A torn labrum in his right shoulder had the quick-firing sharpshooter questioning if it would hold up down the stretch last season.

She made an impression in her short time working on Fred Hoiberg's staff: "You give her a project, and it’s usually back on my desk within an hour."

Seven wins for the Huskers by Christmas? It's not unrealistic, but the schedule is a bear. Here's a deeper dive into the 2021-22 campaign.

Nebraska loses one player from last season and adds four freshmen and a transfer to the mix. Amy Williams had high praise for the transfer.

Trevor Lakes may or may not play in the NBA someday, but he put on a show in front of NBA scouts Tuesday morning.

The Huskers are all vaccinated, but they remain vigilant, which can sometimes add a twist for a staff that is trying to mold a new team together.

The Huskers are nowhere close to defining roles or a lineup. But here's why Williams isn't worried about it

The Nebraska coach doesn't seem too bothered that clear roles aren't defined yet. Well, actually, one group has instructions. The freshmen.

The slogan is in place, but can Husker Hoops make it count when the games get real?

A team meeting called by Trey McGowens after summer workouts caught the attention of his coach. Now, it's about making it last. 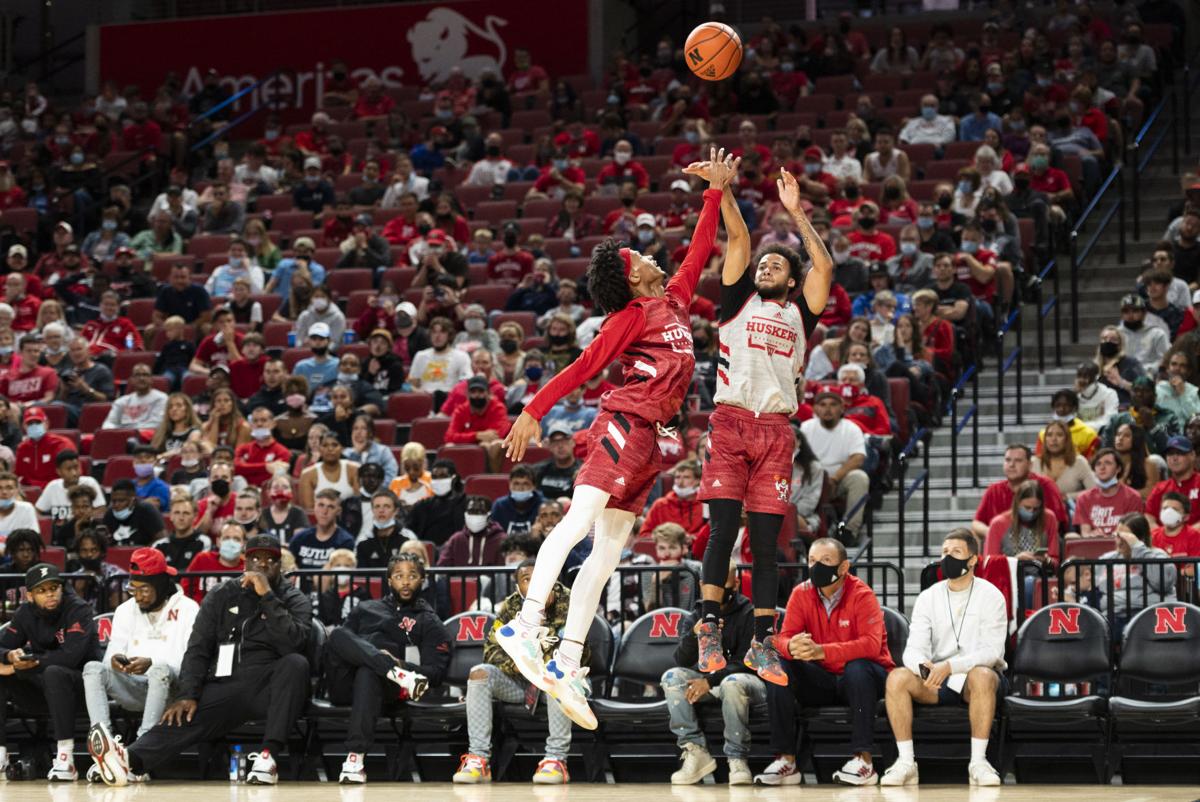 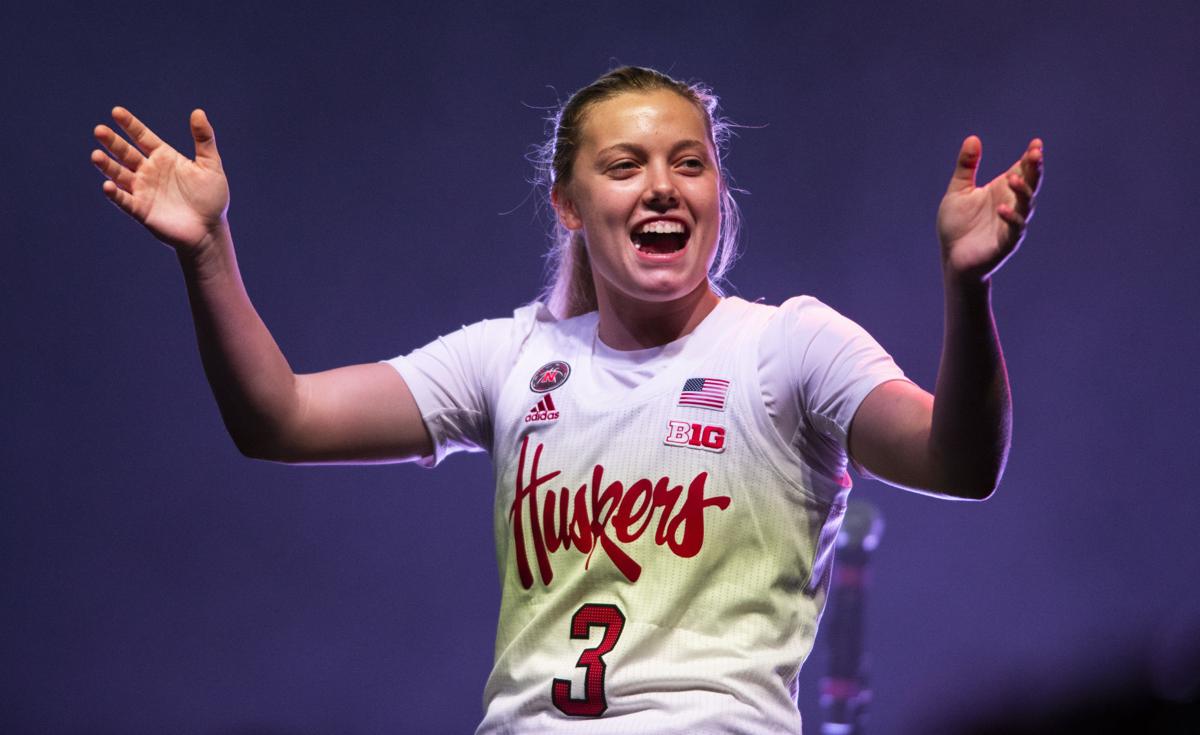