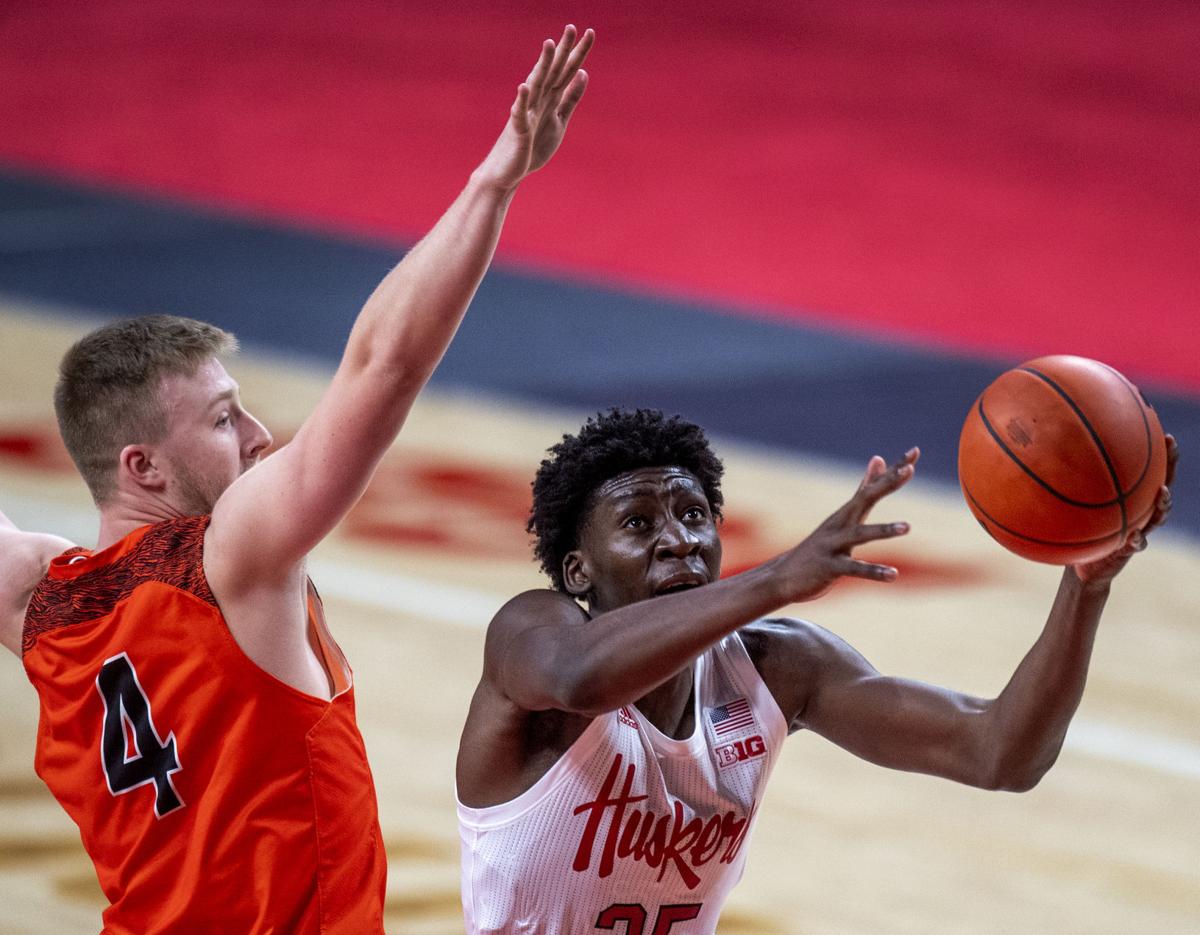 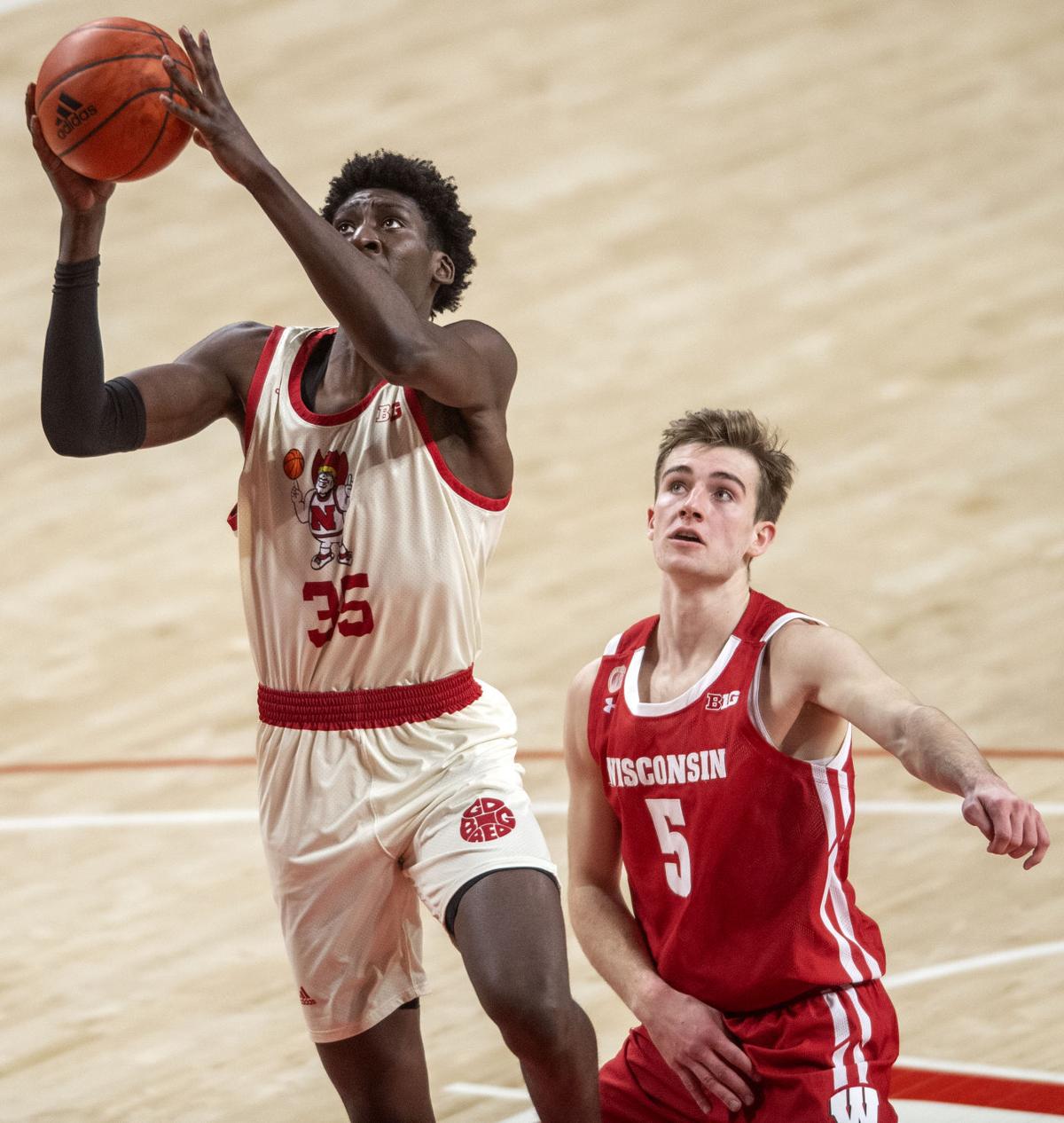 Nebraska Eduardo Andre drives to the basket against Wisconsin’s Tyler Wahl (5) in the first half earlier this month at Pinnacle Bank Arena.

After two entire days off, the Nebraska men's basketball team returns to the court Saturday afternoon.

The remaining schedule (see below) won't be quite as demanding as what the Huskers just completed. But there is still plenty of "opportunity," as NU coach Fred Hoiberg likes to call it, for Nebraska to get on the court, test itself against quality competition, and continue to build a program that can compete.

A 4:30 p.m. tip against Purdue at Pinnacle Bank Arena is the first opportunity.

"These games are all very meaningful for the development of our players. You've seen what it's done for Eduardo (Andre) to get more action and more games," Hoiberg said Friday. "So to me, the more games we can play, the better it's going to be."

For Andre, who came to Lincoln having played just four years of organized basketball, any experience is good experience.

In practice, he serves as the opponents' best big man when Nebraska works on its scout. He has a natural feel for the game that's allowed him to get on the court, and his athleticism and ability to execute the basics in Hoiberg's system — rebound, run the floor, set screens and drive to the basket — has kept him there.

"I think Eduardo's got a chance, with his physical tools, to be special. And I've said that since we got him," Hoiberg said. "And he'll play more and more as we go down the stretch run. I've been really pleased with his development, and proud of how he's continued to work."

In addition to developing his players, the rigorous schedule will, if things go as Hoiberg hopes, serve as a run-up of sorts to an important offseason as NU prepares to add a top-25 recruiting class to the mix.

"Playing some more of the guys that maybe haven't gotten a great opportunity to this point, to hopefully see what we have going into next year; that's going to be an important part of our future," Hoiberg said. "We'll continue to hopefully get guys opportunities, but development is a big part of what we're trying to accomplish with the rest of the season."

The rest of the Nebraska men's basketball team's regular season appears to be set.

With the changes announced by NU on Friday evening, the Huskers are now scheduled to play 19 of their 20 Big Ten games before the start of the Big Ten Tournament.

The changes announced Friday include a Feb. 25 road game at Illinois, and home games against Minnesota (Feb. 27) and Rutgers (March 1) before another road game at Iowa on March 4.

Nebraska will then wrap up the regular season with a road game at Northwestern on March 7, which was already scheduled. Each of Nebraska's seven remaining games will be televised on BTN.

The Illinois game was originally moved to accommodate earlier schedule changes as the Huskers got back to playing after their COVID-19 pause. The Minnesota and Iowa games both had to be postponed due to NU's pause.

The changes mean NU will play four of its next five games at home, starting with Saturday afternoon's contest against Purdue. That game is set for a 4:30 p.m. tip at Pinnacle Bank Arena.

And while the revamped schedule essentially amounts to Nebraska playing a game every other day starting Feb. 23 — six games in 13 days to end the regular season — the upcoming stretch won't be quite as arduous as the one NU just completed.

The Huskers just finished a run of seven games in 12 days, with five of those on the road.

Don't be surprised if Scott Frost's program isn't high on the list of college destinations for the top few in-state players in the class of 2022.

'I think it is affecting us': Fatigue becoming a factor for Huskers as Maryland pulls away in closing minutes

The Huskers missed 12 layups in the game, which was defined by Maryland's 20-6 run in the final eight minutes.

Bench provides a spark, but second-half Purdue run sends Huskers to another loss

Fred Hoiberg: "I still believe in (the starters), no doubt about it." But a group of four reserves had the Huskers in a favorable position.

Fred Hoiberg decided to "play the percentages" in focusing on Purdue's inside threat. Long-time fans can probably tell you what happened next.

Staying steady through his struggles, Thorbjarnarson begins to emerge for Huskers late in season

Long a fan favorite, Thorir Thorbjarnarson's production has faded after a breakout campaign last season. But he's teasing a turnaround.

Nebraska Eduardo Andre drives to the basket against Wisconsin’s Tyler Wahl (5) in the first half earlier this month at Pinnacle Bank Arena.