Subscribe
Read Today's E-Edition
Share This
A transfer shines and Huskers win comfortably, but opening exhibition highlights work left to be done
0 Comments
Share this
1 of 3 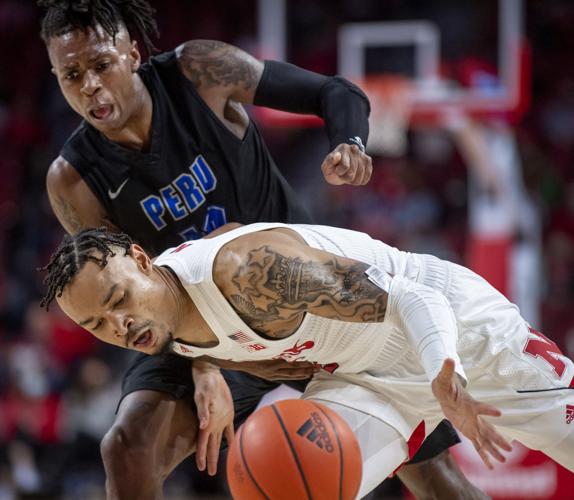 Nebraska’s Trey McGowens (2) battles for the loose ball with Peru State's Tonje Durham in the first half Wednesday at Pinnacle Bank Arena. 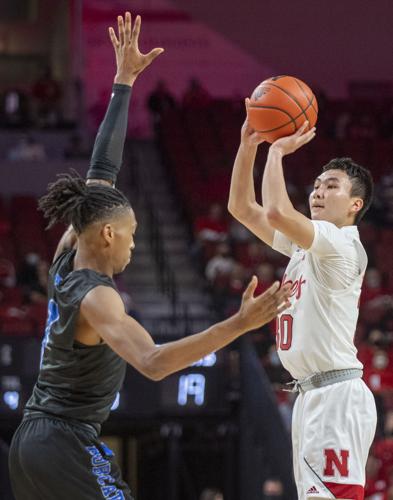 Nebraska’s Keisei Tominaga (right) attempts a three-pointer in the first half against Peru State on Wednesday at Pinnacle Bank Arena. 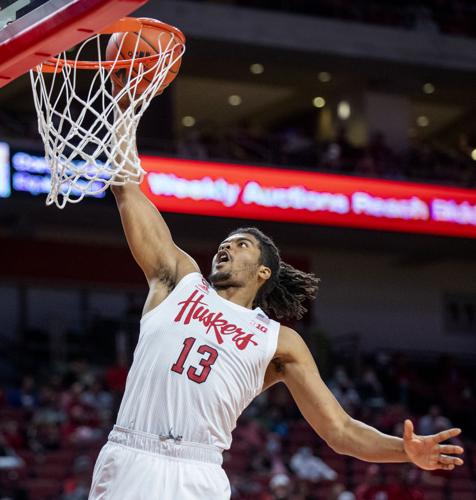 Nebraska’s Derrick Walker (13) goes up for a dunk in the first half against Peru State on Wednesday at Pinnacle Bank Arena.

Nebraska won and the Huskers look like they have something in Alonzo Verge.

Other than that, well, NU has some work to do with an exhibition game against Colorado on Sunday and the regular-season opener less than two weeks away.

NU led by eight at halftime before pulling away for the game’s final 10 minutes for a 97-58 exhibition win over Peru State on Wednesday night at Pinnacle Bank Arena.

"We could have been a little better," senior forward Derrick Walker said. "At times I think we weren't on the same page, but it's our first game. So now we can see where we made mistakes, and now we can correct those mistakes."

In the end, Nebraska won comfortably. But for much of the game, it was the NAIA Bobcats who were winning the rebounding battle and exposing the Huskers' perimeter defense, at one point sitting at 11-for-21 from beyond the three-point arc before missing six of their final seven attempts.

Nebraska outscored Peru State 33-8 over the game's final 10:30 to make the result look prettier than it actually was. A late push from Eduardo Andre helped the Huskers win on the glass, 33-32, but Peru State had 12 offensive rebounds to Nebraska's four, and outscored NU 14-4 in second-chance points.

NU coach Fred Hoiberg used the word "exposed" several times when talking about Peru State's advantages on the glass and at the three-point line.

"That's going to be my theme all year long, is physicality," Hoiberg said. "As the length and athleticism continue to go up, starting on Sunday (against Colorado), we're going to have to grow in that area if we want to have a great season."

Verge, who was the first player off the bench Wednesday, finished with 20 points, four rebounds, eight assists and three steals, scoring 14 points in nine second-half minutes.

The Arizona State transfer's first three possessions of the game ended in assists to Derrick Walker, as he set the tone right away. He scored 10 points in the first 3:18 of the second half to help the Huskers extend the lead.

It's 'just' an exhibition, but here's why Wednesday's game against Peru State is important for Husker hoops

"When he went in there, the game completely changed with our pace," Hoiberg said. "I thought he made simple plays. … He just has great command, and he has a great presence out there; can get into the paint. I thought he made good, smart, simple decisions once he got in there."

Verge watched from the bench for the game's final 11 minutes as both teams began to substitute more liberally. Peru State, which opens its regular season Thursday, played 17 of the 20 players on its roster.

Nebraska, meanwhile, brought in players such as Kobe Webster, Eduardo Andre and Trevor Lakes to close things out and extend the lead. That's two players who started games for NU last season, and another in Andre who saw his playing time increase as the season went on.

"One thing about tonight, we've got 12 or 13 that certainly you can make an argument to get on the floor and get minutes and be in the rotation," Hoiberg said. "And those guys that played the last 10 minutes were phenomenal. They were great on the bench, they were positive, and when they got their chance and their name was called, they went in there and made an impact."

Nebraska's rotation remains in flux, Hoiberg said, with one more exhibition game Sunday against Colorado and nearly two weeks until the regular-season opener against Western Illinois.

"We had conversations with everybody on our roster going into this game, just about roles and how important it is to accept it," Hoiberg said. "Always be ready when your name is called. It's going to be. This thing is a marathon, it's not a sprint.

"So our guys need to be ready. Those guys will play big roles on this team, there's no doubt about that.

Walker and Keon Edwards each scored 12 points for the Huskers, while Andre finished with 10 points and tied the team lead with six rebounds in a little more than eight minutes of playing time.

Nebraska made 22 of 29 shots in the second half, including 7 of 9 three-point attempts. 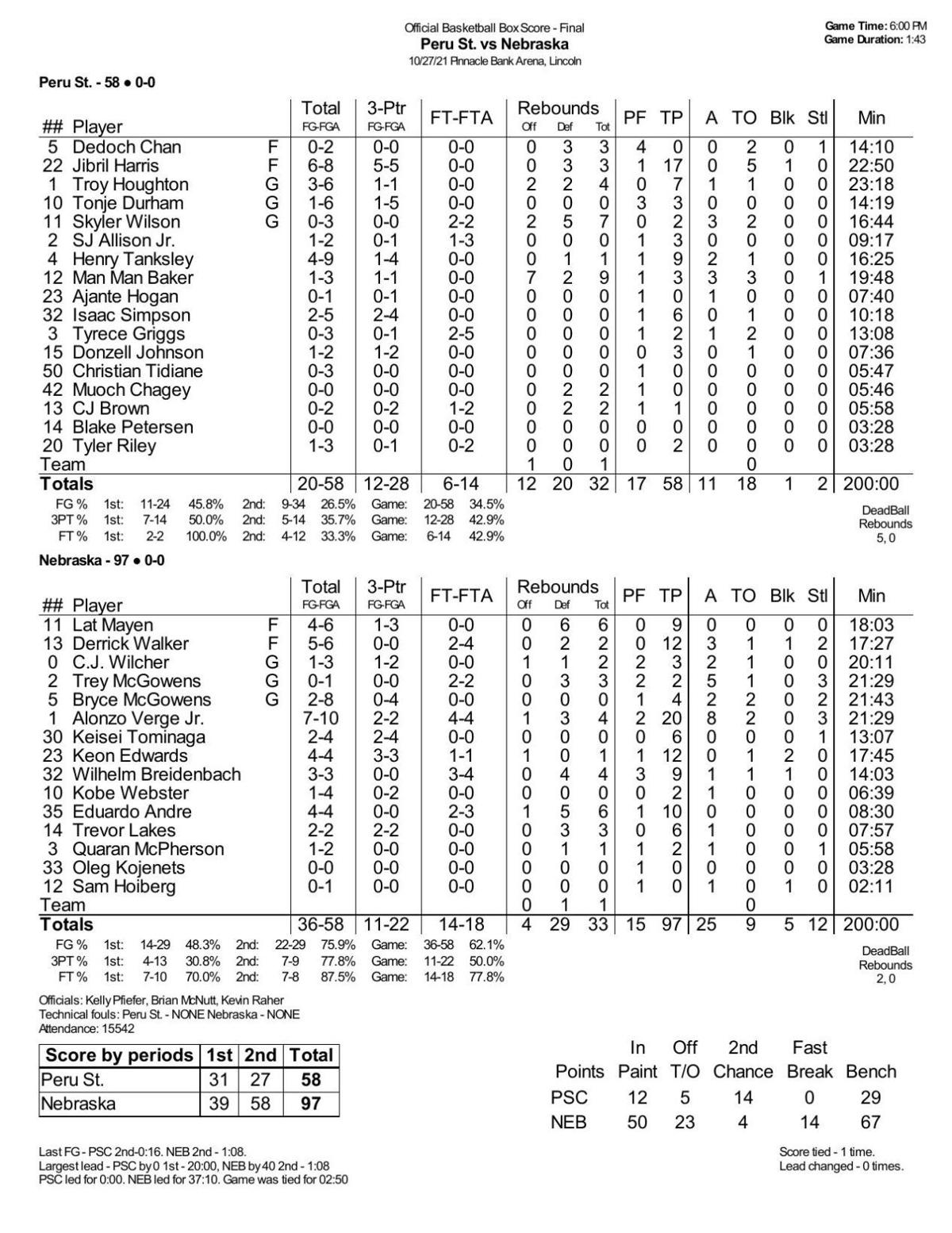 A Ravenna native, Chris Basnett joined the Journal Star in 2016 and has more than 20 years of experience covering prep, college, and professional sports.

How quickly the 6-foot-10 smooth shooter adjusts to the college game could unlock a whole new dimension for Nebraska's forwards.

Hoiberg: "So there's so much time that you're spending together, and the rules are, we can only play against each other until the exhibitions start."

Banton, making his NBA debut, attempted his first shot from behind the half-court line. Well, you can probably guess what happened next.

From no scholarship offers a year ago to a home in Lincoln, 2022 guard Jamarques Lawrence finds a place with Husker hoops

Lawrence put Nebraska in his final two after taking an official visit earlier this month for the Huskers’ Opening Night event.

Old friend, new test for Husker hoops, who hope to use Colorado scrimmage as a barometer

One area Nebraska could seek improvement is on the boards, where it barely edged NAIA Peru State on Wednesday at Pinnacle Bank Arena.

'We got a lot out of today': Husker hoops rolls early, grinds late in exhibition win over Colorado

On a sleepy Sunday morning, the Nebraska men's basketball team provided the balm to soothe the Husker fan base after a rough Saturday.

Hoiberg on the radio: NU feels 'a little bit better' about rotation; praise for McGowens and Tominaga; shooting goals

One note is on — you guessed it — Keisei Tominaga, who Fred Hoiberg says will take on a bigger role this season than the staff originally thought.

Kent Pavelka and Matt Coatney are happy to get back to normal in broadcasting Nebraska basketball games.

Nebraska’s Trey McGowens (2) battles for the loose ball with Peru State's Tonje Durham in the first half Wednesday at Pinnacle Bank Arena.

Nebraska’s Keisei Tominaga (right) attempts a three-pointer in the first half against Peru State on Wednesday at Pinnacle Bank Arena.

Nebraska’s Derrick Walker (13) goes up for a dunk in the first half against Peru State on Wednesday at Pinnacle Bank Arena.