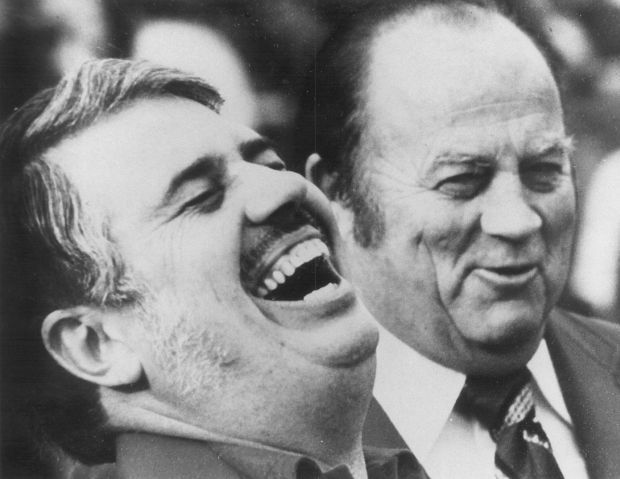 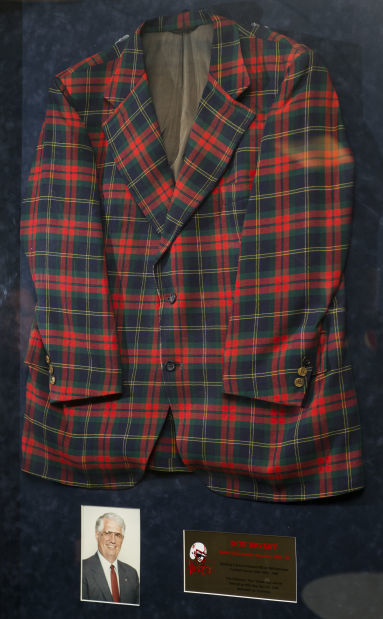 The infamous "Fat Fox" gameday jacket now hangs behind glass in the Don Bryant Press Box at Memorial Stadium. The jacket was worn by the former Nebraska sports information director Don Bryant during his tenure from 1962-93.

When the attendees at the weekly Extra Point Club stood up to applaud Don Bryant after he announced his retirement from the University of Nebraska, Bryant claimed he had just received his first standing ovation where nobody got up and walked out of the room.

The incredible career of Don “The Fat Fox” Bryant covered so many years, so many people, so many events, he was the bridge from Nebraska athletics history to the school’s national identity.

Bryant, 85, died Friday at Bryan East Campus from congestive heart failure. The sports information legend, who practically invented the profession, knew everybody who played at Nebraska, coached at Nebraska and most of those who cheered for Nebraska.

He is survived by his wife of 63 years, Joan "Pedie," sons Bill and Jeff, five grandchildren, “a million stories and a million people I’ve met,” and the Nebraska athletic tradition.

Bryant once said: “The games kind of fade, but all those fantastic people I’ve met and worked with over the years, they don’t fade and they are the reason this job has been worth every second.”

After serving in the Marines, Bryant was sports editor of The Lincoln Star from 1954 to 1962. NU athletic director and football coach Bob Devaney hired Bryant to handle the media, and in 1976, work as associate athletic director for NU.

Coincidently, one of his biggest stories for the Star was finding out who was hired to replace fired football coach Bill Jennings.

“We all knew one (candidate) was in town for an interview, but we had no idea who he was or where he was,” Bryant later said. Nobody knew that Devaney, then the coach at Wyoming, had come to Lincoln and registered under the name “Mr. Roberts.” Devaney stayed at the house of university comptroller Joe Soshnik. "I never found him and here Devaney was staying three houses down the street from me.”

As soon as Bryant took over the media duties and the press box at NU, he asserted his friendly nature and also his authority.

He loved to tell about three Colorado writers singing after the Buffaloes had just beaten Nebraska. “I demanded they leave, because we had other writers working in the press box,” he said. “One of them said, ‘Did you know I’m Colonel Smith of the U.S. Army?' Another said, 'I’m Colonel so and so of the U.S. Air Force.' I said, ‘I’m Sgt. Bryant of the United States Marines. Now get the heck out of my press box.'"

The colorful Bryant, who got his nickname “The Fat Fox” as a tease by a Lincoln High track teammate, helped form the modern TV and radio contracts with university sports programs. When he started, the press box was full of writers, working on typewriters with carbon paper to hand to an on-site telegrapher. Bryant carried his suitcase of film reels by car and train to nearby towns to promote the Huskers. His staff, which was pretty much his son Bill, was housed in a one-room office in the NU Coliseum. The “media relations” staff now takes up most of a floor at North Stadium.

Nebraska football coverage grew from four radio stations and a handful of newspaper writers to daily national coverage from more than 50 print, radio, TV and online reporters showing up daily.

He worked side-by-side with Devaney and Tom Osborne through five national championships.

“I was lucky to be employed by either Bob or Tom,” Bryant once joked.

After he retired from sports information in 1997, Bryant taught public relations at Nebraska, wrote the popular book “More Tales from the Nebraska Sidelines,” wrote a weekly column, “Like It Was,” for the Hickman Voice newspaper, owned by his son Bill, and entertained anybody who took time to listen to his thousands of stories of Husker football history.

The press box at Memorial Stadium is named for Bryant, who also worked as media coordinator for the Winter Olympics in 1980, 1984 and 1988, and served on dozens of NCAA committees. He was a past president of the College Sports Information Directors of America, and in 1981 received the Arch Ward Memorial Award for outstanding service to the profession.

Osborne: Bryant will be missed

Don Bryant was the personification of Twitter and Facebook long before social media and even computers were in public use.

In the mid-1950s, Don Bryant, then the sports editor of The Lincoln Star, was having a nightcap in an Oklahoma City hotel bar with Lincoln Jou…

Photos: Don Bryant through the years

Don Bryant, the longtime sports information director at Nebraska, died Friday at the age of 85.

The infamous "Fat Fox" gameday jacket now hangs behind glass in the Don Bryant Press Box at Memorial Stadium. The jacket was worn by the former Nebraska sports information director Don Bryant during his tenure from 1962-93.