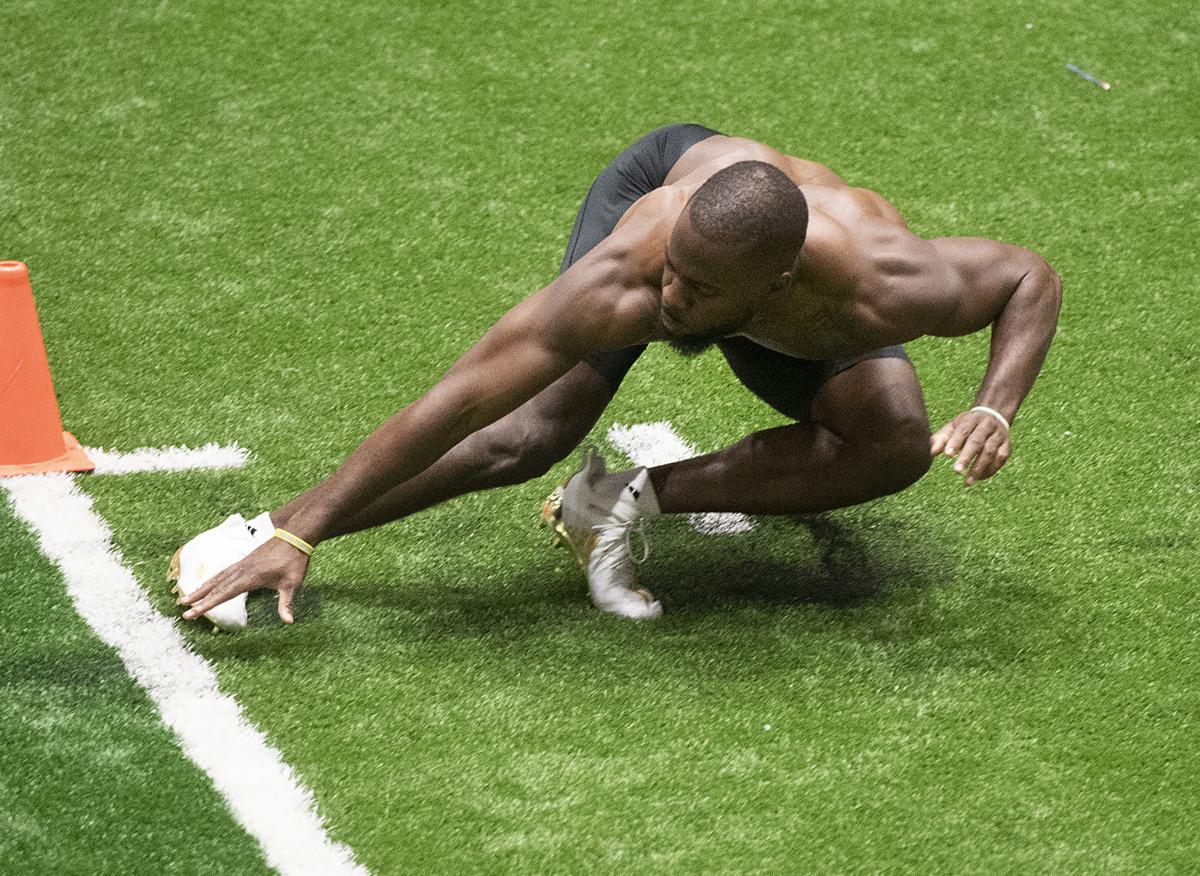 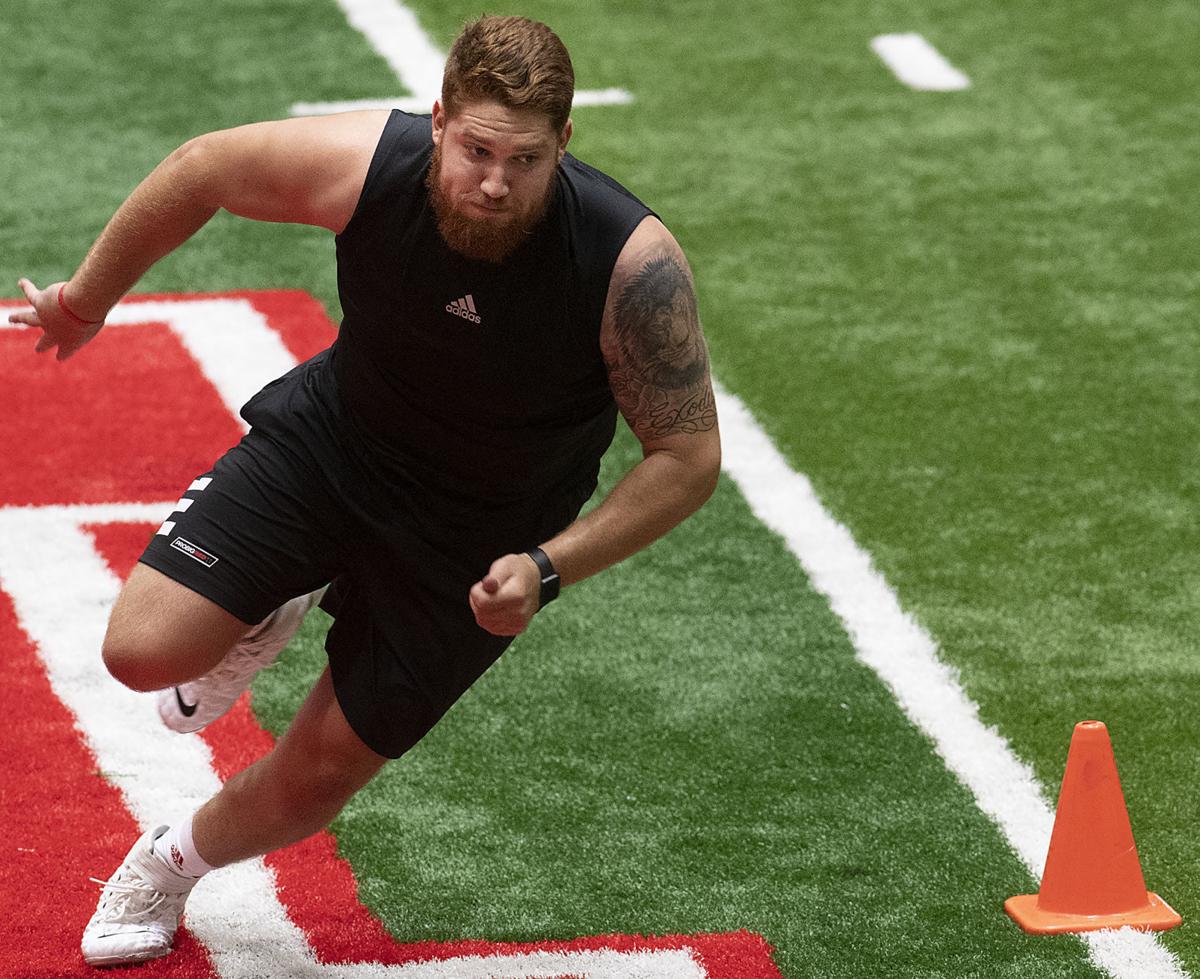 Brenden Jaimes makes a turn in a shuttle run during Pro Day at Nebraska football's pro day on March 23 at Hawks Championship Center.

Dicaprio Bootle called his shot Monday and backed it up Tuesday.

One day after saying he planned to run his way into the NFL, the former Nebraska defensive back ran the 40-yard dash in 4.38 seconds unofficially.

The 32-game starter at NU said the day before that he planned to crack the 4.4-second mark and did so as part of an all-around solid pro day at the Hawks Championship Center.

After a year unlike any other, pro day goals remain similar for former Huskers: Be 'extremely fast'

The Miami native and four of his former teammates — running back Dedrick Mills, tight end Jack Stoll and offensive linemen Matt Farniok and Brenden Jaimes — performed in front of scouts from 23 NFL franchises in the weight room and on the practice field. Each of them did some individual position drill work, too.

Some other notes and observations:

* Farniok, who told reporters Monday he weighed about 312 pounds, turned in a solid performance all around, highlighted by a 33-inch vertical jump and 38 repetitions on the bench press. He ran the 40-yard dash in the :5.1-:5.2 range unofficially and looked smooth through the agility drills.

* Jaimes said Monday he was right about 300 pounds. He logged a 30½-inch vertical and did 25 repetitions on the bench. He did not run the 40 on Tuesday, telling scouts in attendance that he felt some tightness in his right calf and his back after completing the broad jump in the weight room.

He was able to go through the agility drills and some simple hand striking work with Farniok.

* Mills clocked in at the mid- to upper 4.5-second range in the 40-yard dash, not blistering, but not outside the norm for running back prospects, particularly ones that play at north of 200 pounds. He said he wanted to show scouts that he catches the ball naturally and did pretty extensive route-running work after the timed runs and agility drills. He does catch the ball with his body and let a few hit the ground, but overall likely felt good about his day.

* Stoll was solid all around, running in the 4.6-second range in the 40-yard dash, adding a 9-11 broad jump and showing strong, confident hands in pass-catching work. The Colorado native, remember, injured his knee against Ohio State in Nebraska's season opener back in October and wore a brace throughout the season after missing one game.

Stoll never put up huge numbers at NU, but if he can hold up in the run game and prove himself on special teams, he should at least get a look at the next level.

A bunch of players hung out and watched, including a group of defensive backs including Cam Taylor-Britt and former Husker Lamar Jackson, who just finished his rookie season with the New York Jets, keeping a close eye on Bootle.

Other guys such as tight end Austin Allen, linebacker Will Honas, young players including Randolph Kpai, Gabe Ervin and Alante Brown and several others watched from the field and the balcony, as well.

It's a light week for the current players after winter conditioning wrapped up a few days ago and before they gather to kick off spring ball next week.

Nebraska has a bunch of it up front, but this conversation begins with Ben Stille. We explain.

Steven M. Sipple: Tuioti's life in Lincoln working out well with help from some Hawaiian friends

One key to keeping student-athletes from Hawaii happy is a family atmosphere. Another key is food. That's where Tony Tuioti comes in.

Pencil to paper: Sketching out an offensive two-deep for the Huskers ahead of spring ball

Parker Gabriel says it's time to put together a depth chart. So let's do it.

Adrian Martinez has been a leader since the day he stepped on campus, going through successes and struggles, setting up a critical spring.

Yes, the guys are talking NCAA hoops. Plus, a look at Nebraska basketball's roster movement — and the latest football chatter.

Will Honas, Luke Reimer, Nick Henrich and Chris Kolarevic offer a solid base. After those four, it's wide open. Let's break it down.

Report: Ndamukong Suh returning to Tampa on one-year deal; Abdullah back with Vikings

The former Husker great has agreed to a one-year, $9 million deal to try to repeat as champions in Tampa, according to a report.

Spring setup: With everybody back at OLB, is there a wild card candidate to crack the rotation?

As the March 30 start of spring football draws nearer for Nebraska, the Journal Star is taking a brief look at each position on the roster and…

The Nebraska athletic director said during the "Sports Nightly" radio program that NU now would like to play that game earlier in the fall.

Dicaprio Bootle provides insight on his approach ahead of the Huskers' pro day, his faith, his decision to not return to Nebraska and more.

Brenden Jaimes makes a turn in a shuttle run during Pro Day at Nebraska football's pro day on March 23 at Hawks Championship Center.