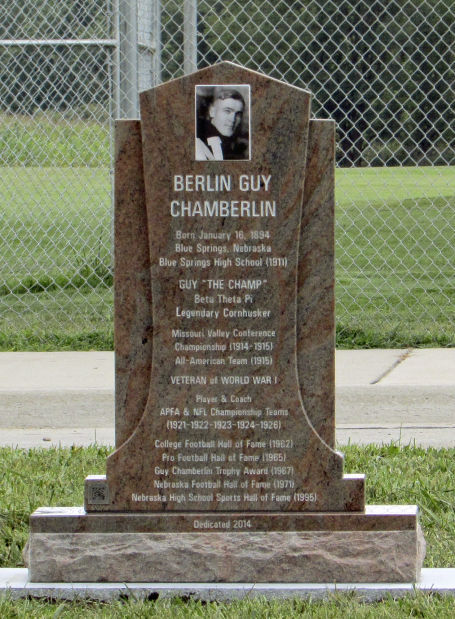 A team of volunteers needed only a couple of months to plan and mostly pay for a 4-foot granite monument honoring football great Guy Chamberlin. The memorial was installed earlier this month west of the original site of Blue Springs High School. 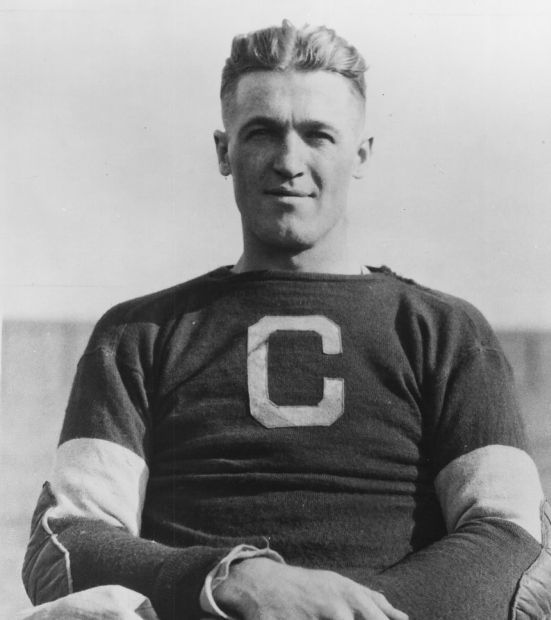 Guy Chamberlin was inducted into the Pro Football Hall of Fame in 1965 and, nearly 50 years later, he's being honored by his hometown of Blue Springs. “I’m of the opinion that Uncle Guy is up there and is hopefully able to appreciate all the work everybody is doing,” said his niece, Mary Anderson. “If not, I’ll tell him when I get there.” 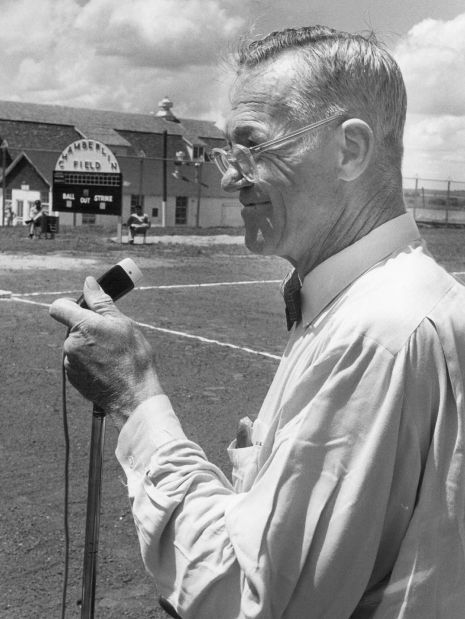 After Guy Chamberlin moved to Lincoln in the 1950s, he took a job at the old State Reformatory. And in 1962, they named its football field after him. 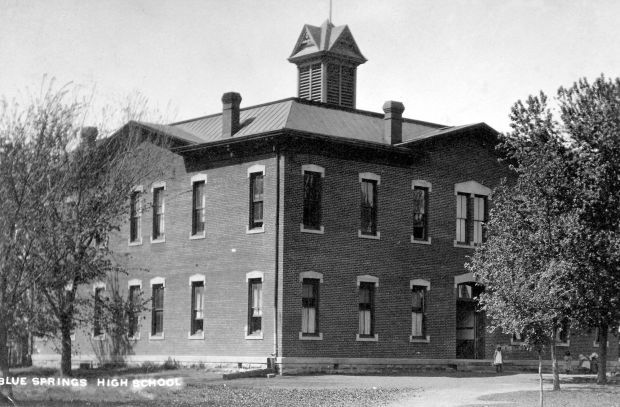 The high school Guy Chamberlin graduated from in 1911 was razed in 1919. The community will dedicate a monument in his memory near the school site on Saturday.

After her lessons on the Pawnee and pioneers, Jan Eloise Morris likes to share a sports story with the fourth-graders on her Blue Springs history tours.

The school bus carries them 2 miles outside of town for her talk about Berlin Guy Chamberlin.

Born 120 years ago, he led Wesleyan’s football team to an undefeated season his freshman year and a two-loss run the next. He took the Cornhuskers to a 29-game unbeaten streak and national glory.

In six years coaching the pros, he won five championships. He made the college and pro football halls of fame. The University of Nebraska named a trophy after him and bronzed his silhouette on the gate that unleashes the tunnel walk.

Then Morris tells the fourth-graders what she hopes they will remember most.

Before Guy Chamberlin became a legend, he was just like them -- a child of the same Gage County town, a product of these farm fields in the Big Blue River Valley.

“I want these kids to know their football heroes aren’t in a big stadium far away,” she says. “They’re growing up right around them.”

Soon, every student at Southern Elementary will get a similar history lesson. Morris, a Blue Springs native now living in Lincoln, has managed to pull off something hall-of-fame worthy herself: In just months, her team of volunteers finished the planning, secured the permission and raised most of the money to make a lasting memorial to the man who became known as The Champ.

In May, at the end of one of the 90-minute tours, fourth-grade teacher Kane Hookstra approached Morris.

“He asked if anyone had ever thought about a monument in honor of Chamberlin,” she said.

There was nothing in Blue Springs. Not even a sign at the edge of town.

“I just think it’s a shame,” said Hookstra, also the high school football coach. “He wasn’t recognized for all of his greatness in his hometown.”

The Chamberlin family had planted deep and broad roots in southern Gage County. Elmer Chamberlin farmed nearly 1,000 acres, more than most at the time.

“He was a rugged, hard-working old gentleman,” said Roland Hardin, whose father, Delbert, worked summers on the Chamberlin farm.

He was particular about the way he farmed. And pragmatic: They say he dropped the ‘A’ from Chamberlain so the name better fit on a grain sack.

Elmer kept a stable of 40 to 50 horses. During wheat harvest, he expected a fresh team every two hours. That was Delbert’s job.

“That way none of them got real tired,” Roland Hardin said. “This old man Chamberlin, when he started binding wheat, he demanded his meals in the field. He ate in the field and he slept in the field.”

And when the moon lit the field, he’d work through the night.

Elmer and Anna had twin daughters and four sons, including Guy, born in 1894.

The boy’s football career is well-documented: He played for Blue Springs, graduated in 1911 and spent two years at Wesleyan. As a freshman, the 180-pound halfback helped the Coyotes outscore opponents 93 to 10.

He transferred to the University of Nebraska in 1913, sat out a season, but then dominated in 1914 and 1915, scoring 24 touchdowns. When the Cornhuskers beat Notre Dame by one point, Irish assistant coach Knute Rockne called the All-American “the key to Nebraska’s victory.”

He graduated in 1916, spent one year as principal and coach in Lexington and then two in the Army.

Football called him back in 1919, when Jim Thorpe recruited the Nebraskan to play for the pre-NFL Bulldogs of Canton, Ohio. He spent eight years with the pros, most of those as player and coach.

And when that part of his life was over, he went home.

“What I was really impressed about was Chamberlin came back there when he retired from football,” Morris said. “He really did love Blue Springs and that area of Gage County and, of course, his family farm.”

The historian had little interest in sports. But she spent dozens of hours researching Chamberlin, collecting stories and making connections.

“What I saw was a young man who was like the young guys who came and threw hay bales for my dad,," she said. "That’s what his childhood was like, yet he went on to do great things.”

Her search led her to Mary Anderson, Chamberlin’s 89-year-old niece, in Wisconsin.

Anderson’s father, Arnold, died when she was 8 and her sister was 3, and the girls from Lincoln spent summers on the farm with her grandparents and uncles. She recalled Sunday dinners, and learning to like raw oatmeal, and trying to catch the football thrown by Guy.

“We were chasing it all over the backyard,” she said. “We weren’t any good, but we had a lot of fun.”

These memories are eight decades old, and she thinks about them for a moment. No, she says, she has nothing but warm recollections of her uncle.

“The only time I ever heard him raise his voice was when he and his father were discussing about Guy buying a tractor to work on the farm," she said. "I guess Grandpa held the purse strings, because there was quite a discussion over the fact the tractor didn’t have to be fed corn and oats.”

Her uncle didn’t completely leave football; he helped coach the Wymore Zephyrs in 1939. In the story announcing his appointment, the Lincoln Star called him a “Nebraska gridiron ace.”

He quit farming in the 1940s and bought a tractor dealership in Nebraska City. He and his wife, Bernyce, moved to Lincoln in the 1950s, about the time Anderson was starting to understand what her uncle had accomplished with a football.

“It wasn’t until I was a major Cornhusker living in New York that I began to realize just who he was," Anderson said, "and what a fabulous person he was.”

When Chamberlin died in 1967, his ashes dusted the fields he’d worked as a child, and then as a man.

“I said, ‘You know, I’m not a sports fan, but this just seems like something important for the community,’” Morris said.

They talked about putting it in the park. But the coach had another idea: Why not install it at the elementary, on the site of Chamberlin's long-gone high school?

“We got clearances and then we started raising money,” Morris said. “Pretty much everyone thought this was a great idea and that it probably should have been done a long time before.”

They moved fast: This is the 120th anniversary of Chamberlin’s birth and the 100th year since his debut as a varsity Cornhusker. They also wanted it done in time for the town celebration this weekend.

The city helped speed the effort by lending the money for the monument, and donations will pay it back, Reedy said.

But he also gave credit to Morris and other volunteers for making it happen so fast.

“In a little over 2½ months, we have a monument in place and we’re dedicating it,” he said. “I try to tell her what we have done, what she has done, is unbelievable.”

Morris had a vision of the monument, and she shopped for a suitable stone. A custom cut could take months to come from overseas, but she found what she wanted at Lincoln’s Trump Memorials, a 4-foot piece of granite with an art deco profile that seemed to fit Chamberlin’s era.

They’ve collected more than $3,000, and the money came in quicker than expected. From alumni of Chamberlin’s fraternity, Beta Theta Pi. From his family. From the community. From Chamberlin Award winners.

The stone is set, ready for this weekend, engraved with a photo of the young man and a list of his accomplishments on the football field.

Chamberlin scored the touchdowns and set the records. But Morris deserves credit for getting him the hometown recognition he deserved, Hookstra said.

“She’s certainly the driving force behind it," he said. "She took the ball and ran with it.”

A team of volunteers needed only a couple of months to plan and mostly pay for a 4-foot granite monument honoring football great Guy Chamberlin. The memorial was installed earlier this month west of the original site of Blue Springs High School.

Guy Chamberlin was inducted into the Pro Football Hall of Fame in 1965 and, nearly 50 years later, he's being honored by his hometown of Blue Springs. “I’m of the opinion that Uncle Guy is up there and is hopefully able to appreciate all the work everybody is doing,” said his niece, Mary Anderson. “If not, I’ll tell him when I get there.”

After Guy Chamberlin moved to Lincoln in the 1950s, he took a job at the old State Reformatory. And in 1962, they named its football field after him.

The high school Guy Chamberlin graduated from in 1911 was razed in 1919. The community will dedicate a monument in his memory near the school site on Saturday.