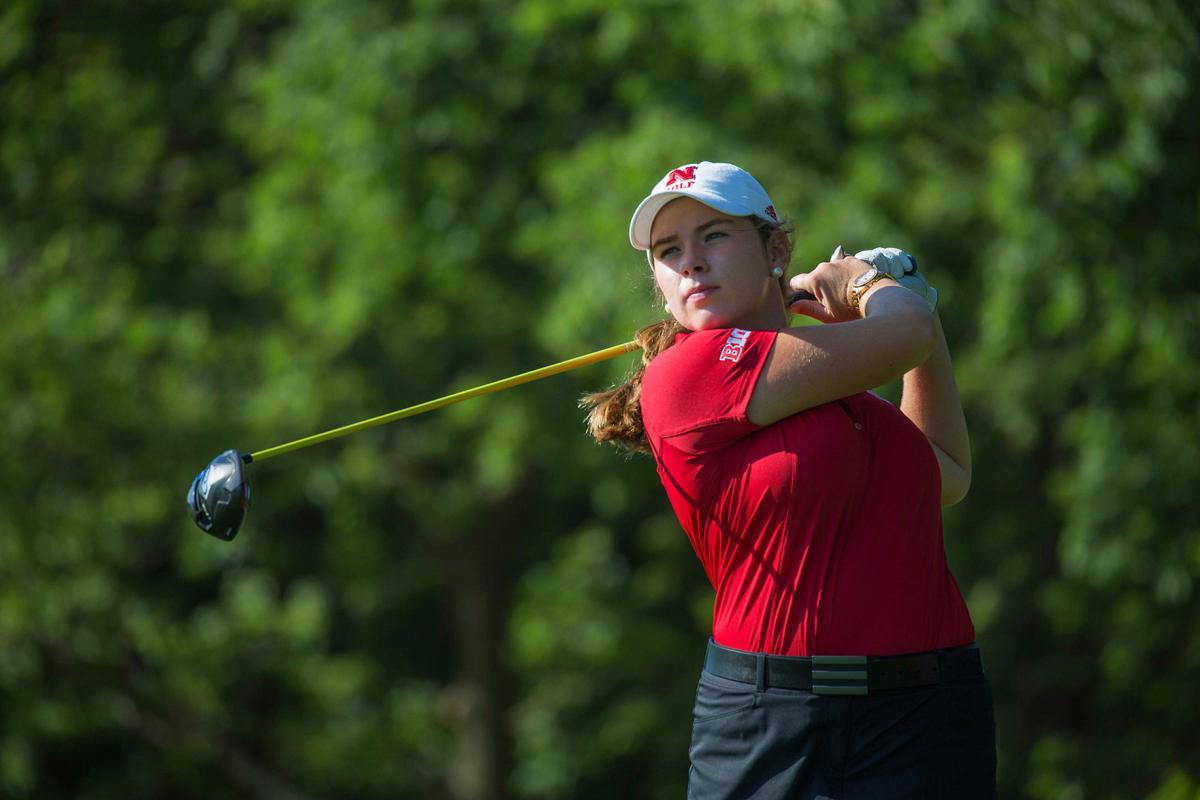 Kate Smith is one of the most successful athletes in the history of the Nebraska women's golf program. She's coming back for a second senior season after the 2020 season ended early because of the COVID-19 pandemic. 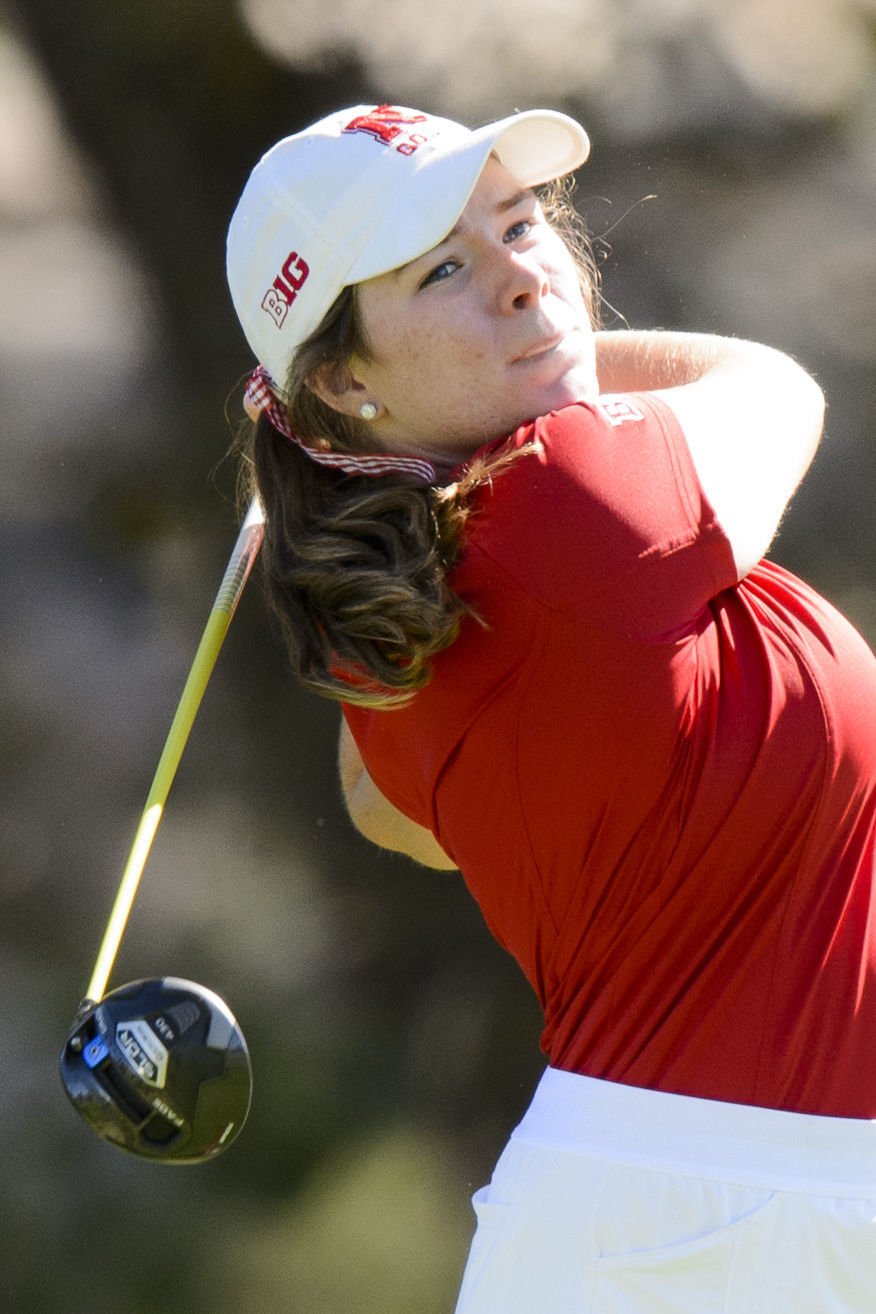 Nebraska's Kate Smith tees off on the 18th hole during the Chip-N Club Invitational at Wilderness Ridge Golf Course.

There are lots of people who say that they grew up on the golf course, but Kate Smith, a senior on the Nebraska women’s golf team, actually did.

Smith is from Detroit Lakes, Minnesota, and her family owned and ran a small nine-hole golf course. They lived in a home on the property from when she was 10 months old until she was 16.

“I learned how to change cups and mow greens. It was really fun to grow up on the course,” Smith said.

Her parents sold the course several years ago, and now work at a different course.

Smith is now one of the most successful players in the history of the Husker women’s program, and it was how she grew up that helped her become the player and person she is. She learned a lot about hard work and setbacks. Running a successful business in golf can be tough, especially in Minnesota, where snow covers the course for several months.

The family lived in a building on the property. In the home there was a bell when guests entered the pro shop.

“We had an intercom in our living room so when somebody came in the door we could hear it, and one of us would run out and help the customer, and then we’d go back and cook dinner,” Smith said.

Smith was also fortunate to have an older brother, Karter, who played, and helped her when her parents were busy running the course. Karter also played college golf, at Drake.

“The reason I’m the golfer I am today is because my brother, he would always have me play with him and practice with him,” Kate Smith said. “We’d go out and play nine holes with just one club, or we’d chip after dinner. He always got me into the game and challenged me. We were always outside and on the golf course. It was a fortunate way to grow up. I don’t know if it was always the easiest on our family as a whole, but we’re really happy that we did it.”

Smith would play from the longer men’s tees, which also benefited her. She’d even get to play when her brothers’ friends were at the course.

“He always had so much respect for me, and never treated me as a little girl, and knew that I could play with him and his friends and compete just as well,” Smith said.

That helped prepare her for a great high school playing career. In Minnesota you can compete on the high school team beginning in seventh grade. Playing in the second-largest division, Smith finished fifth at state as a seventh grader, and then won state each of the next five years.

For this season, which was cut short by the COVID-19 pandemic, Smith earned first-team all-Big Ten honors and won the award for the best stroke average relative to par in the conference.

'Senior Day' series: After learning of his season ending while on the course, NU golfer Owen will return next season

Smith was ranked No. 101 in the country when the season ended, which means she was on pace to qualify for one of the three NCAA regional tournaments.

At regionals she would have attempted to be the first Husker golfer to qualify for nationals since 2006. Smith qualified for regionals as a freshman in 2017, and is one of just two Huskers to make regionals in the past 11 years.

Smith has decided that she’ll return to Nebraska for a second senior season, taking an advantage of an NCAA waiver for spring sport athletes who had their senior seasons cut short by the pandemic.

She had planned to continue to play golf at the professional level, but feels like another year at Nebraska with the coaching and resources would benefit her.

When she returns next season, Smith hopes to win a tournament, either as a team or individual, and become an All-American. Nebraska hasn’t had an All-American since Sarah Sasse in 2003.

Smith was in Arizona on the course for a practice round the day before a tournament when the season was canceled. That’s how she thought her college career would end, until the announcement came that athletes may be able to get another senior season.

“I know the world doesn’t revolve around college athletics, but as a student-athlete, your world kind of revolves around the NCAA,” Smith said. “So when that happened, that was huge. And it’s really a blessing that Nebraska decided to fund it. It’s a real gift to seniors that are coming back.”

Kevin Cahoy doesn't have to look far for perspective in the wake of coronavirus concerns that canceled the spring season.

Seniors Sierra Hassel and Luke Siedhoff were named the 2020 Nebraska student-athletes of the year during the annual Night at the Lied event, w…

The NCAA Division I Council voted Monday to approve a blanket waiver for all spring sports athletes to get an extra year of eligibility.

Here is a list of Nebraska seniors who will have the choice to return for another season.

'Senior Day' series: After first deciding against being a thrower, Insingo became one of Nebraska's best

Kristina Insingo won four shot put titles during the indoor season and qualified for nationals before the season was shut down.

The Husker senior was in position to accomplish more in the small window of time that remained in her collegiate career. Then it was taken away.

Football, volleyball, men's and women's basketball and women's soccer will be the first Husker teams to return to campus.

It's been business as usual at the city of Lincoln's municipal golf courses as the coronavirus pandemic wears on into its fourth month.

Summer golf competitions set to tee off — with some changes

Things will look a little different this summer as the state's top amateur golfers finally get a chance to compete in tournaments.

'Senior Day' series: LSE grad Forsberg had her best track season at Nebraska, and may not be done yet

Nebraska's Elsa Forsberg had the best season of her career during the indoor track season, but her momentum is halted due to the pandemic.

The Pinnacle Bank Championship, scheduled for July 30-Aug. 2 at Elkhorn's Indian Creek, will not be played in front of spectators.

Kate Smith is one of the most successful athletes in the history of the Nebraska women's golf program. She's coming back for a second senior season after the 2020 season ended early because of the COVID-19 pandemic.

Nebraska's Kate Smith tees off on the 18th hole during the Chip-N Club Invitational at Wilderness Ridge Golf Course.