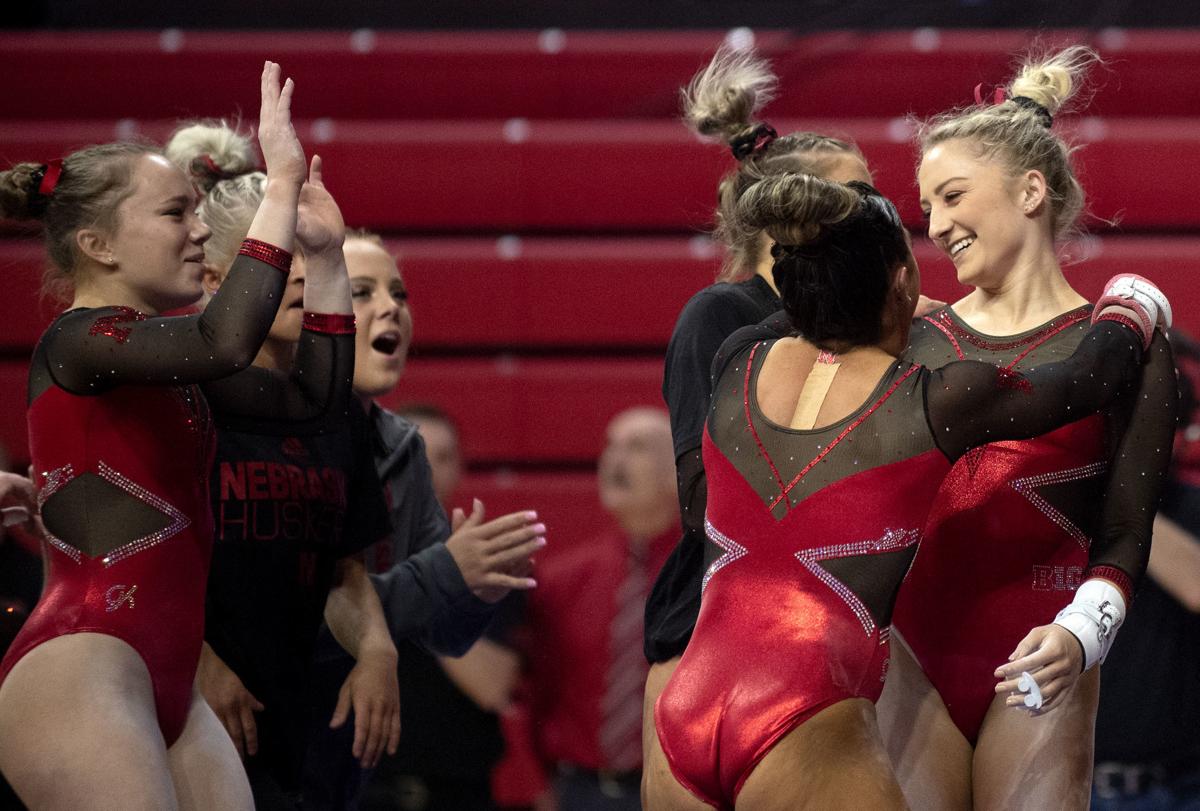 Nebraska's Taylor Houchin (right) is mobbed by her teammates after her performance on the bars against Michigan on Jan. 30 at the Devaney Sports Center. 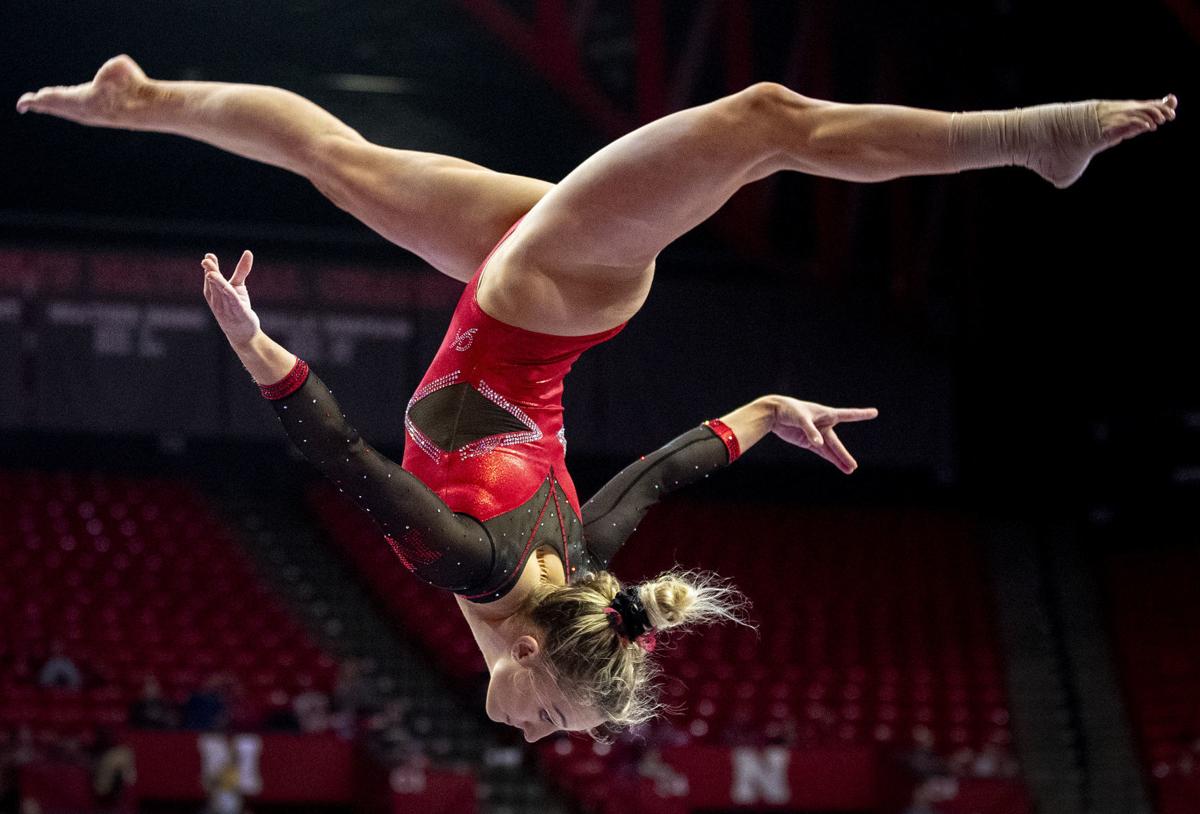 Nebraska's Taylor Houchin does a backflip on the balance beam against Michigan on Jan. 30 at the Devaney Sports Center.

Note: Seniors around the country had their collegiate careers stopped abruptly because of the COVID-19 pandemic. The Journal Star wants to highlight athletes and their accomplishments in the hopes of giving them the closest thing to a senior send-off in a series called "Senior Day." If you know of any seniors — those with local ties and competing in winter and spring sports — the Journal Star should consider highlighting, send a note to Sports Editor Clark Grell at cgrell@journalstar.com.

Taylor Houchin was having some of her best practices. She was preparing for her final home meet, and quite more, a chance at a national championship in women's gymnastics.

Then it was all taken away on March 12. The practices, the final home meet, the Big Ten meet, the NCAAs. The sport.

With the uncertainty of the season offering one more game, Jason Munsch took advantage, firing an unforgettable no-hitter.

The COVID-19 outbreak was getting more real and more scary, leading to the cancellation of NCAA championships and seasons. For Houchin and teammate Sierra Hassel, it meant the abrupt end to their Husker careers.

"And just like that I'm retired," Houchin tweeted during the fluid chaos.

Houchin was heartbroken and speechless.

The Husker senior, after all, was in position to accomplish more in the small window of time that remained in her collegiate career.

For Houchin, however, competing at Nebraska was more than sticking landings, event titles and All-America awards. She was reminded of that in the days that followed, her social media accounts filling with a lot of feel-good messages from family, friends and other gymnasts.

"It definitely makes it easier to process," Houchin said Sunday. "Just seeing all the love and seeing that my goal with this whole thing was to make an impact and leave an impact on young gymnasts or people in my community. Being able to see that I've accomplished that makes me a little less sad about losing those last three weeks."

Houchin accomplished a lot in four years with the Huskers.

She amassed 41 career titles, including 15 this year. The Republic, Missouri, native was ranked No. 3 nationally on vault.

Houchin's biggest honor came before the season was stopped. She was named one of six finalists for the AAI Award, which goes to the nation's top senior gymnast.

Houchin said she was at a good place mentally and physically late in the season. The team had just moved into the new state-of-the-art training facility, which was leading to some strong workouts, especially on uneven bars.

"Just being able to have a new gym just kind of remotivated everybody, in a sense, to practice as hard as we can and take advantage of that facility," Houchin said. "I was doing really well on everything, and I was really excited about what was coming."

Wide-ranging impact of the coronavirus will have Scott Frost contemplating matters he never dreamed he'd have to address as a football coach.

Nothing beats sticking a landing on floor exercise, vault or beam, Houchin says. But it will be the people she'll remember most at NU, including her teammates.

"Every year I've tried to take something from the seniors that have been there, just to kind of put into how I'm going to lead the team," Houchin said. "I've grown a lot by doing that and remembering all these people that have changed my life for the better.

"I've had a lot of coaches at Nebraska and it's been challenging in its own ways, but it's also been cool to see different people and the way they lead a team by coaching us and just learning new things from all of them has been really cool."

Though Houchin's gymnastics career is complete, she's looking to take the sport's lessons into the real world.

She wants to take a try at Cirque du Soleil, an entertainment outlet that can put Houchin's acrobatic and trampoline skills to good use.

Houchin will graduate in December and the plan is to teach high school English. She also plans to be a student-coach for Heather Brink's program next fall, so she isn't exiting Husker gymnastics just yet.

Houchin said she'll remember a lot, everything from the silly pre-meet stuff with teammates, to sticking landings in front of the home crowd, to the Sundays reserved for fun practices.

"Definitely a lot to miss, but that's why I'm excited to be with them for these next six months, just to kind of get used to it even more, shifting from gymnast to kind of an outsider," she said.

First time as an AP poll voter a learning experience

The Journal Star's Chris Basnett was one of 65 media members nationwide to vote in the weekly Associated Press Top 25 poll.

The news that the NCAA had canceled all winter and spring championships came as a crushing blow for coach Mark Manning and the Nebraska wrestling team.

The Nebraska senior women's gymnast was announced a first-team All-American on vault.

The Husker wrestler was among those disappointed due to a senior season cut short.

The NCAA Division I Council voted Monday to approve a blanket waiver for all spring sports athletes to get an extra year of eligibility.

With pools around the globe closed due to COVID-19, many competitive swimmers, including a former Thunderbolt, are recalibrating before diving back in.

Will Gleason says the rugged schedule the NU men's tennis team faced in the first part of the season will serve them well in the future.

Nebraska's Taylor Houchin was named the Region 4 gymnast of the year by the Women's Collegiate Gymnastics Association on Tuesday.

'Senior Day' series: After first deciding against being a thrower, Insingo became one of Nebraska's best

Kristina Insingo won four shot put titles during the indoor season and qualified for nationals before the season was shut down.

Nebraska gymnastics has a new state-of-the-art home, but it can't be used at the moment amid the virus pandemic.

'Senior Day' series: After learning of his season ending while on the course, NU golfer Owen will return next season

Tanner Owen's golf season ended abruptly, but not his Nebraska career. The program's leader is declining job offers for one last go-round.

When she was growing up in Minnesota, Kate Smith's family lived in a home on a golf course. That set her on the track for success at Nebraska.

Nebraska's Taylor Houchin (right) is mobbed by her teammates after her performance on the bars against Michigan on Jan. 30 at the Devaney Sports Center.

Nebraska's Taylor Houchin does a backflip on the balance beam against Michigan on Jan. 30 at the Devaney Sports Center.