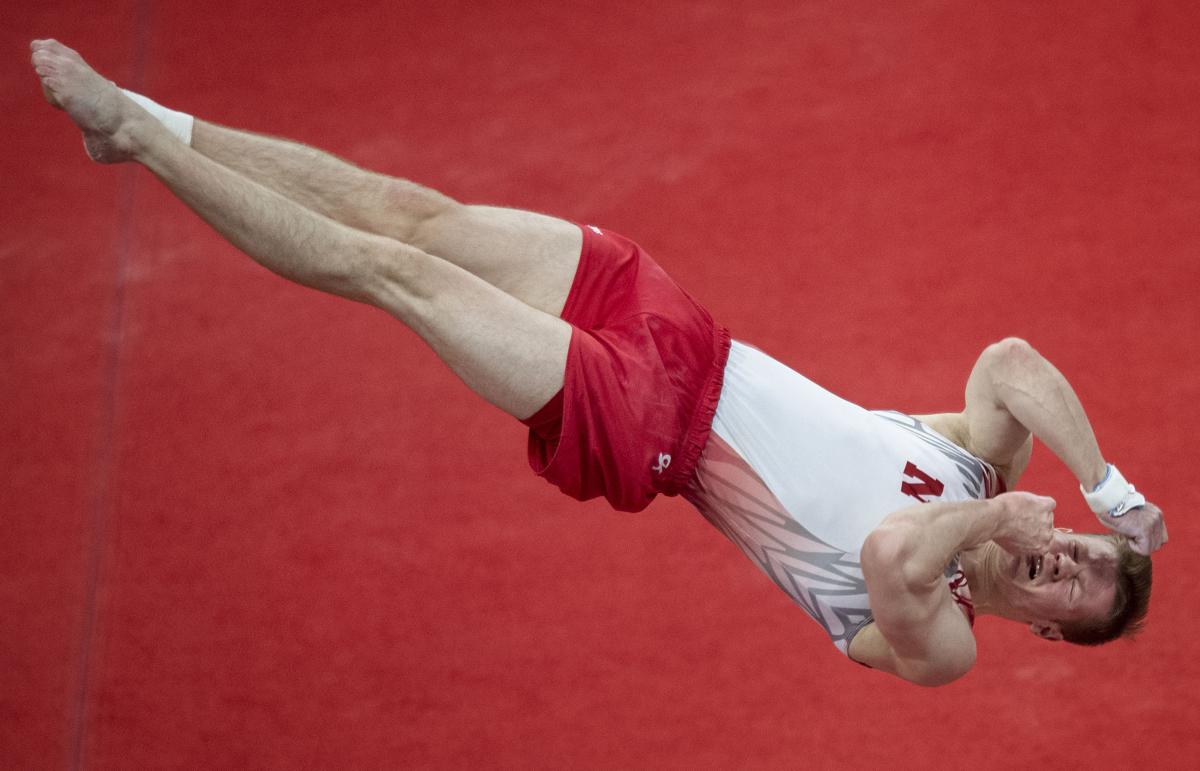 Nebraska's Jake Bonnay competes on the floor exercise during a meet against Minnesota at the Devaney Sports Center on Feb. 13. 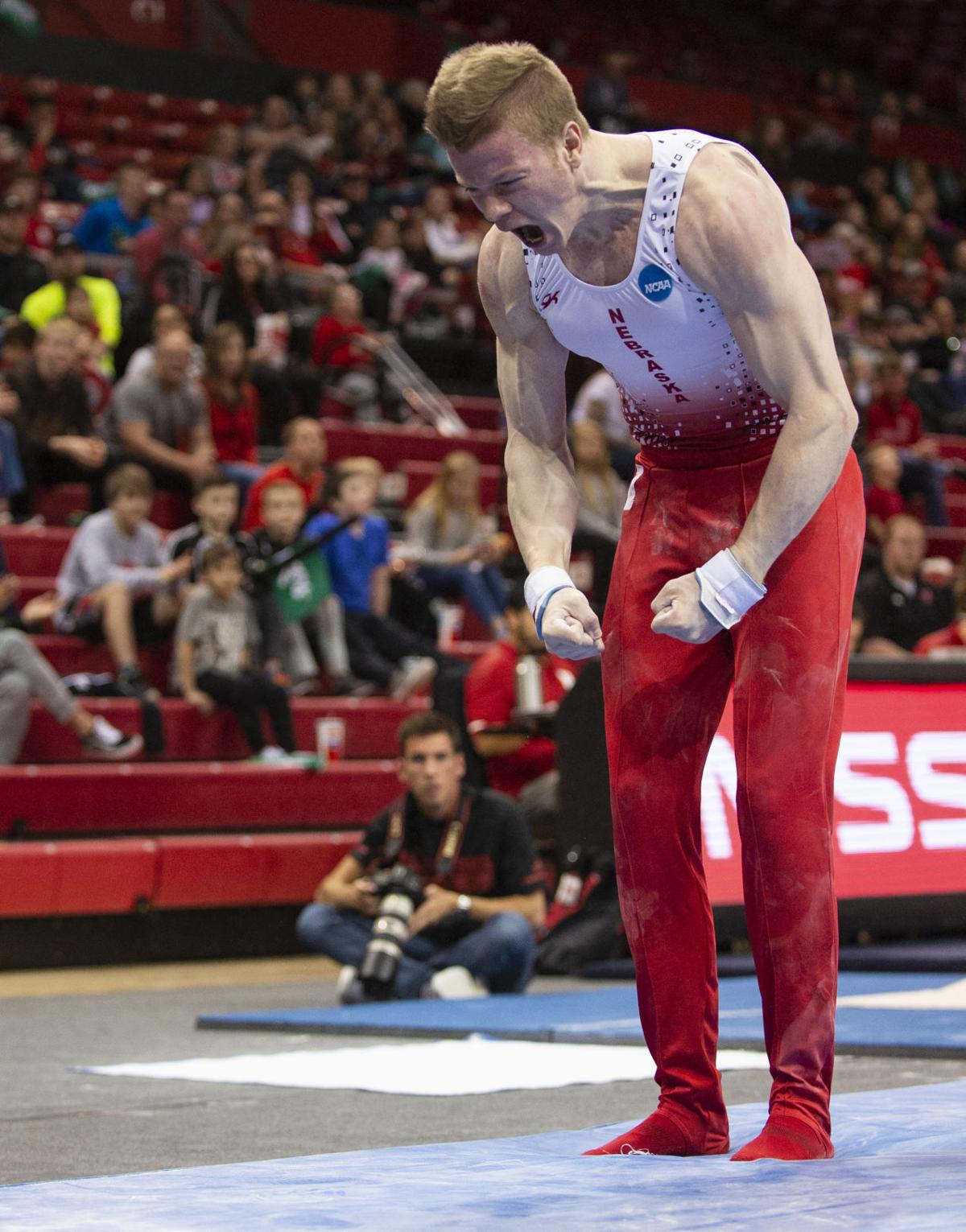 Nebraska's Jake Bonnay screams in celebration after completing his pommel horse routine during a 2019 meet against Oklahoma at the Devaney Sports Center.

His shoulders, however, have made that a challenging task in 2021.

It was Bonnay's goal to contribute on at least four events this season for the Nebraska men's gymnastics team. But a pair of ailing shoulders — including a shoulder tweak this week — a wrist sprain and a bum ankle have limited the All-American to floor exercise and high bar this year.

Said NU coach Chuck Chmelka, "It is frustrating because he's really good and he wants to continue to do gymnastics and try to make the Canadian Olympic Team, or at least world championships team down the road, so he's going to keep going and keep training."

Bonnay, though, has a healthy outlook on things. Barring any other setbacks, he'll likely compete on floor when Nebraska hosts the Big Ten Championships at 7 p.m. Saturday at Pinnacle Bank Arena. A strong showing on one of his best events and a chance to help the team make a run at a Big Ten crown in front of the home crowd would help ease some pain.

"I'm just trying to focus on the positives," the Burlington, Ontario, native said. "I'm able to compete at Big Tens at home, which is something everybody dreams of."

One or two events, Bonnay will look to make the most of his opportunities. He has past success in championship settings to build upon.

In his best meet as a Husker, Bonnay earned silver medals on vault and floor as a sophomore at the 2018 Big Ten Championships, and he was an All-American on floor in 2019. One of Nebraska's most experienced gymnasts, he has won 10 individual titles as a Husker, including six on floor. And despite not being 100%, Bonnay is among the nation's leaders on floor this year.

Despite the setbacks, Bonnay is in a much better spot than he was at this time last year.

Yes, the COVID-19 pandemic had already stopped college sports, but Bonnay, then a senior, already was on the shelf before the season was canceled. He dislocated his ankle early in the year, which led to Bonnay receiving a medical hardship. He could have called it a career (he also needed shoulder reconstruction surgery last June), but Bonnay couldn't pass up the opportunity to compete for NU again.

"It really didn't make sense to not jump at the opportunity for another year of competing at NCAA, another year of doing what I enjoy most," said Bonnay, who has a season-best 14.55 on floor. "As soon as I made the decision and I came back, I haven't looked back. I have enjoyed every single day. I haven't regretted it one bit."

Though Bonnay has been limited physically, he continues to have an impact on a fairly young team with his leadership and experience, Chmelka said.

"He has grown so much from last year, and I think everything he went through with the ankle and the rehab and, 'Am I going to have to be done?' … All the roller coaster of emotions, he has really matured as a man, and it's been really great to have him in the gym this year, day in and day out," the coach said.

That maturity has shown through a tough year for Bonnay. He said his scores could be higher, but he's not letting that or the injuries drag down his season. He's learning to appreciate what comes with it.

"Just last year's injury that cut my season short kind of made me realize anything can be over in a split second like that," said Bonnay, who is eligible to compete next year, too, and hasn't ruled out a return. "So just taking everything in as much as I can, enjoying it while I still can, because I know that I'm not going to do gymnastics forever."

Nebraska, ranked No. 4, will be hosting Big Tens for the first time since 2014. All seven Big Ten teams are ranked in the top nine in the national polls.

Up to 5,000 fans will be allowed inside PBA on Saturday. Tickets must be purchased online at huskers.com/tickets.

A tough Saturday for NU's gymnastics teams, as the men fell to Iowa by a half-point and the women concluded its season at the Big Tens.

'Who we are is how we finish:' Husker gymnasts shake off slow start to earn best placing at Big Ten Championships

Nebraska finished with a 398.000, marking the first time this season NU failed to score above 400. But, a grand finish took the sting away.

'We are the sleeper:' NU gymnasts believe they have the blueprint to make a surprise run at NCAAs

Oklahoma, Michigan and Stanford have combined to win the past seven national championships. But what about the No. 4 Huskers?

Nebraska reached the finals for the fourth straight time.

No. 4 Nebraska popped for a big score on its final event, vault, to shoot from sixth place to fourth place in the final team standings

With another strong showing at NCAAs, Husker gymnasts believe they are closing gap on the big two

Nebraska's fourth-place finish at the NCAA Championships was another step forward for coach Mark Chmelka's program, which has steadied the ship after a long lull.

The two captains each announced Monday that they will take advantage of the extra year granted by the NCAA because of COVID-19.

Nebraska's Jake Bonnay competes on the floor exercise during a meet against Minnesota at the Devaney Sports Center on Feb. 13.

Nebraska's Jake Bonnay screams in celebration after completing his pommel horse routine during a 2019 meet against Oklahoma at the Devaney Sports Center.