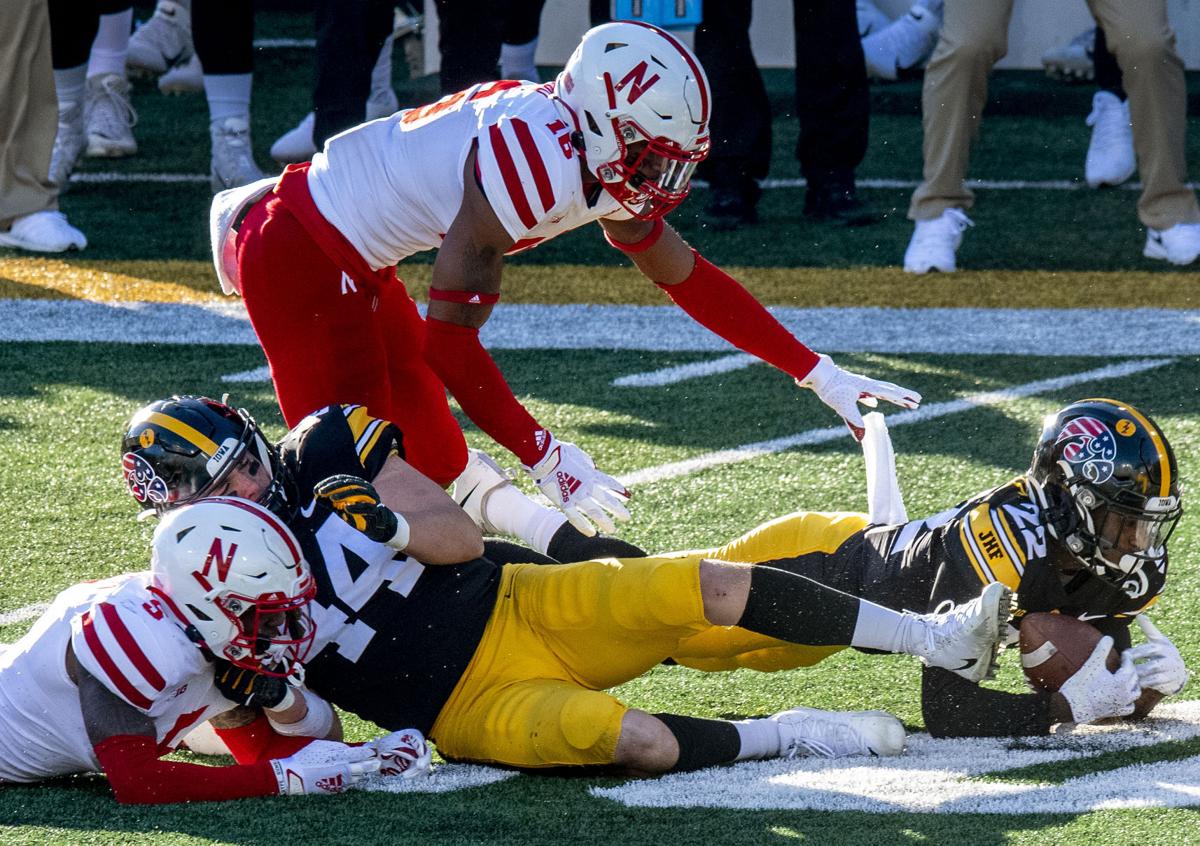 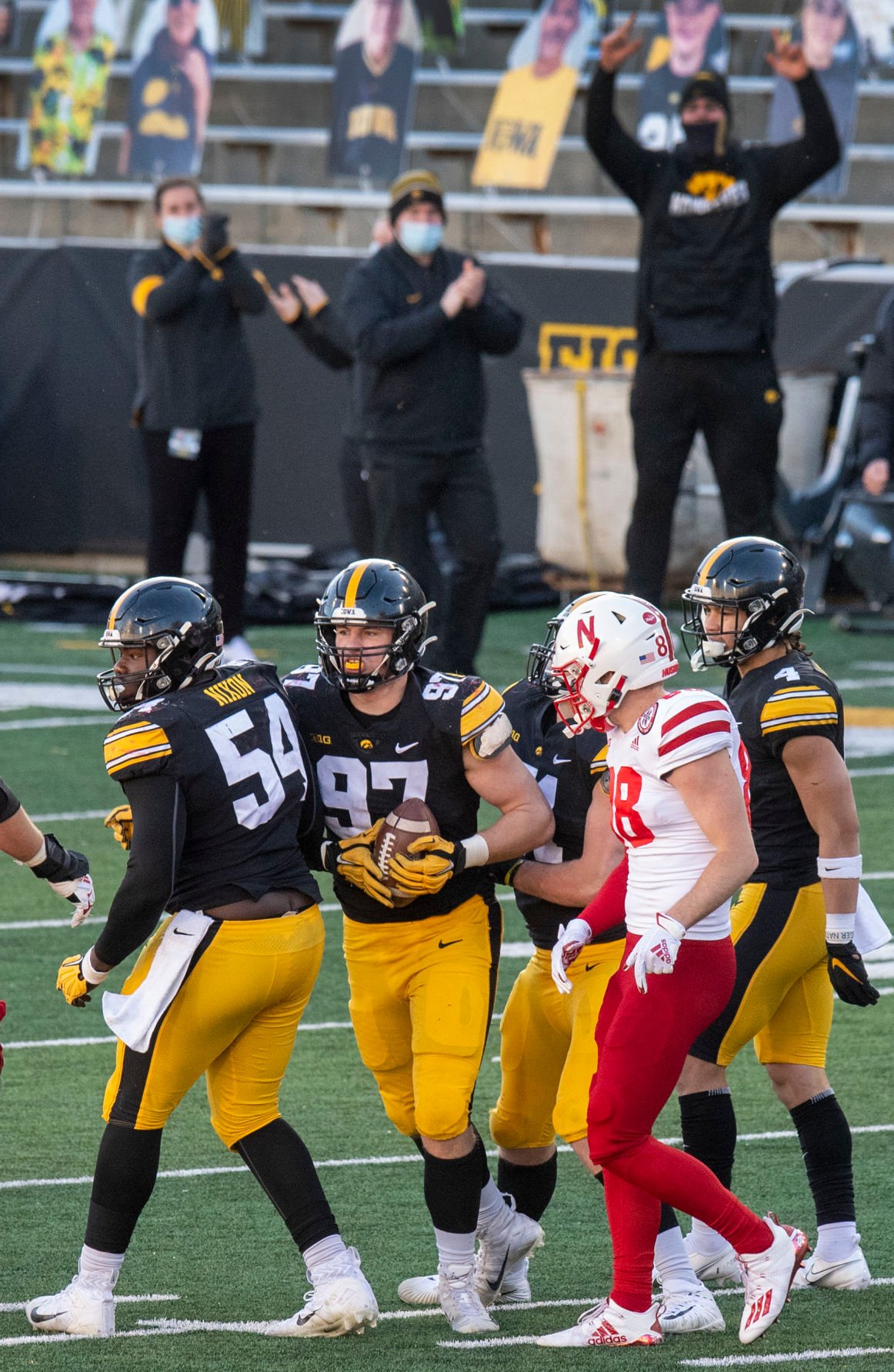 Iowa's Zach VanValkenburg (97) holds the ball fumbled by Nebraska quarterback Adrian Martinez in the fourth quarter Friday at Kinnick Stadium. in Iowa City, Iowa. The Hawkeyes ran out the clock after the turnover and won 26-20. 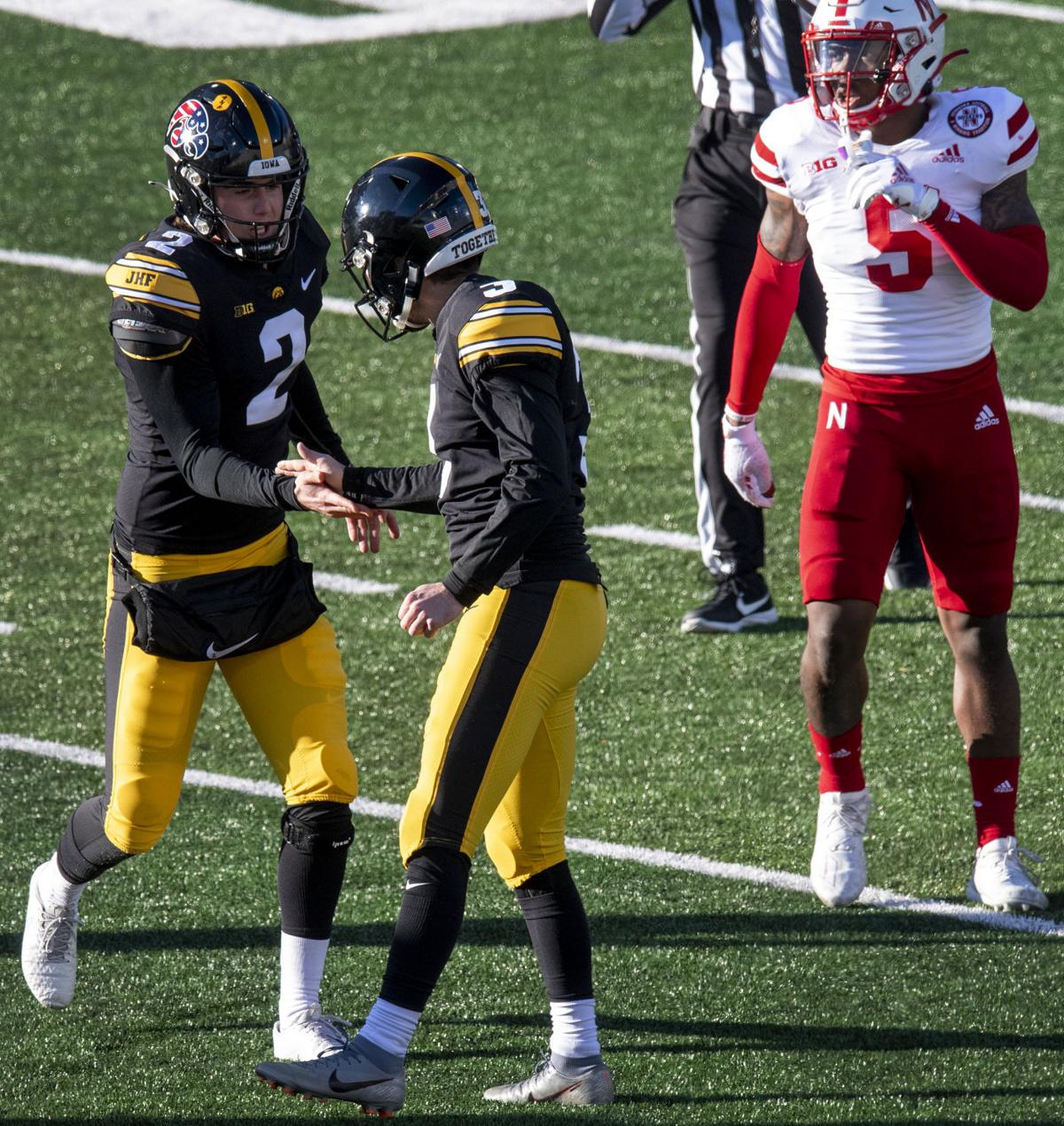 IOWA CITY, Iowa — Scott Frost is 45 years old, but he felt older than that on Friday afternoon.

It is not the first time he’s felt and looked and sounded as if the three years (minus one week) since he arrived in Lincoln spry and excited and fresh off a magical 2017 season at Central Florida have taken a toll on him akin to dog years or a presidential term.

Three years down the road? He remains resolute, but worn. Particularly so after a 26-20 defeat at the hands of the Iowa Hawkeyes, who now have delivered three of the 11 one-score losses of Frost’s 10-19 mark so far at his alma mater.

This certainly feels old, too, for Nebraska’s fans and players.

The Blackshirts rebounded from a dismal outing against Illinois and proved they were mostly up to the task of going toe-to-toe with the Hawkeye run game for the first time in the past half-decade.

Football has three phases, though, and if one separated Frost’s program from Kirk Ferentz’s on Black Friday, it was the special teams.

Iowa’s was rock solid. Nebraska’s was anything but. And the Hawkeyes notched a sixth straight victory in this series thanks in large part to a four field-goal day from senior Keith Duncan — who buried a game-winner into the Huskers’ hearts last year before this one — and a major, consistent advantage in field position.

The Hawkeyes got one big assist from its defensive line late after Duncan’s fifth field-goal attempt hit the crossbar and NU (1-4) mounted a drive the other way in the closing moments. Chauncey Golston sacked Martinez and forced a fumble that Iowa (4-2) recovered with 1 minute, 19 seconds to go, thwarting a drive that had the potential to win the game for the Huskers.

Nebraska’s pass protection held up well overall on the day — its quarterback duo completed 21 of 25 passes for 195 yards on the day — but Golston on the final play ripped past senior right guard and captain Matt Farniok and blasted Martinez as he was trying to dump the ball off.

“I know Matt is hurting, just from looking at him in the locker room, because of what happened on the last play, but I love him,” Frost said. “He’s fought through a lot at Nebraska and plays his tail off for us. He’s a really good player and a really good person.”

So ended Nebraska’s final opportunity to write a narrative twist in this rivalry.

The adage goes that one play doesn’t make the difference in a football game, but instead a series of small events often add up to determine the outcome. When it came to special teams Friday, the accumulation buried the Huskers.

“It’s really frustrating,” Frost said. “We spent a lot of time on (special teams), and it’s supposed to be better. We were supposed to punt the ball to the sideline like we did later in the game, but we left one in the middle of the field, and that can’t happen. That’s the stuff I’m talking about, that as an entire coaching staff and the leaders on our football team, we can’t let anything happen. Not one inch of anything that’s not disciplined, not buttoned up.”

Iowa’s starting field position was 11 yards better (own 37 to own 26) than Nebraska’s. It averaged 19.5 yards per punt return compared to 3 for NU.

The visitors’ biggest special teams blunder came early in the fourth quarter when NU junior defensive back Cam Taylor-Britt muffed a punt after Nebraska had forced a three-and-out while trailing 23-20. Instead of getting the ball back with good field position, Iowa took possession at the Nebraska 38.

The defense held its ground but yielded three points.

“We need to catch every punt in practice because it matters,” Frost said. “We played too good defensively to give them the fields that we gave them. It can’t be that we’re buttoned up on defense and we don’t play well on offense. It can’t be that we play good on offense and don’t play good on special teams. That kind of discipline has to go all the way through the program, and that starts with the coaching staff.

For the second straight year, Iowa's smack-talking kicker has the last word against the Huskers

Really, that’s the kind of day it was. The offense wasn’t brilliant but churned out enough to give the Huskers a chance with both Martinez and McCaffrey at the controls at different times. The defense wasn't perfect, but it stood up to the test of the Hawkeyes' run game and kept the game well within reach.

Entering Friday, the Hawkeyes averaged 6.2 yards per rush and 244 per game on the ground over their five-game winning streak against NU. On Friday: 2.9 and 129. The Huskers entered dead last in third-down defense, yielding 54.7% in their first four games. Iowa converted just 4-of-14.

“We knew what kind of game we were going to get into with Iowa,” said sophomore inside linebacker Luke Reimer, who finished with a team-best 12 tackles. “They were just going to run the ball and we had to stop the run and stop the ball. I thought we did an OK job, but obviously not enough.”

Iowa opened up an early 10-0 lead thanks in large part to a huge advantage in field position. It started its first three drives at its own 32, its own 44 and the NU 46. Late in the second quarter, Nebraska held Iowa to a field goal at the end of a 12-play drive that kept the game within 13-6.

Even that deficit felt like a missed opportunity, however, considering Nebraska settled for field goals the first two times it drove into the red zone.

NU capitalized in the middle of the game, though, knotting the score at 13 just before halftime and then shrugging off a season-long bugaboo and taking the first drive of the third quarter right down the field for a go-ahead score on a 12-yard Rahmir Johnson touchdown run.

Iowa responded with a 14-play scoring drive of its own, then notched its first three-and-out before a 48-yard field goal from Duncan gave the Hawkeyes the lead back at 23-20 on the first play of the fourth quarter.

The Huskers had a drive thwarted in part by a Bryce Benhart holding penalty — oh, Frost had choice words for the officiating crew when that flag came out, negating a big play by Martinez — but the defense again held the line.

Then came Taylor-Britt’s misplay and the ensuing field goal. The game wasn’t over at that point — the Husker offense had two more cracks at it before the clocks hit zero — but the overall special teams performance stood emblematic of the close-but-not-good-enough frustration that Frost wore just as clearly as his white T-shirt and red hat after the game.

“I don’t think anything changed. We got really bad field position a couple of times and they’re a really good team,” Frost said. “We needed one more drive somewhere. One less fumble. One less penalty. One more stop. One more call.

“That’s the kind of game you’re going to have to win against Iowa and Northwestern, because they don’t give you anything easy. And Wisconsin. Those are really good teams. Really good teams that have been doing the same thing for a long time, know what they’re doing. They have detail and discipline in their program because they’ve been building it for a long time. We’re still trying to get there.”

Players after the game echoed Reimer’s sentiment after he said this group has “a lot left in the tank for us.” Remaining on the slate: a road trip to Purdue, a Dec. 12 home game against Minnesota and a cross-division game on Dec. 19. A couple of wins might be enough to earn a berth to a bowl game, but those are dwindling as it is — the Big Ten-affiliated Pinstripe Bowl was canceled on Friday — and a bid is certainly no guarantee for this team.

The only choice is to move forward. Frost knows Husker Nation has heard that too many times, not just in the past three years but in the past 20.

But what else is there to say?

“Sooner or later, woulda-coulda-shoulda’s need to turn into wins, but I don’t doubt it for a second,” Frost said.

Photos: Iowa hangs on to beat Nebraska to claim the Heroes Trophy for sixth straight year

How did the Huskers fare in four stats that were talking points in the week leading up to Friday's game?

The practice grades were 'dead even,' so Frost turned to both Martinez and McCaffrey against Iowa

Nebraska's QB carousel against Iowa was the plan all along. Scott Frost said the two were "dead even" in practice leading up to the game.

Frost said Iowa's sideline tactics played a part in the Beatrice native's poor snaps in the first half.

NU fans definitely share in Scott Frost's pain. Do they share in his optimism? Depends who you ask, and it's probably best to wait a few days.

Husker Extra Live: Answering your questions and comments after Nebraska's loss to Iowa

Steven M. Sipple and Parker Gabriel break down Nebraska's 26-20 loss to Iowa on Friday afternoon and take questions from viewers.

No. 3 Ohio State cancels game at Illinois after virus spike

No. 3 Ohio State’s game at Illinois on Saturday has been canceled because the Buckeyes have had a spike of COVID-19 cases this week.

A Husker senior and a true freshman had strikingly different Fridays. Then Scott Frost talked culture after the game. Coincidence, or something more?

Former Husker great Dominic Raiola is not piling on Cameron Jurgens. It's just that the bad-snap issue baffles the long-time NFL center.

Nebraska will play Purdue at 11 a.m. Saturday's as the Huskers' season is down to three games remaining.

Some Nebraska defenders quit on Bob Diaco late in the 2017 season, and some Purdue defenders apparently haven't fully embraced his ways.

A wide-ranging notebook begins with Jurgens, ends with seniors cherishing the moment — with a look at RBs, Blackshirts and more in between.

The Huskers and Minnesota will start at 11 a.m. on Saturday at Memorial Stadium is set to be broadcast on either Big Ten Network or FS1.

Iowa's Zach VanValkenburg (97) holds the ball fumbled by Nebraska quarterback Adrian Martinez in the fourth quarter Friday at Kinnick Stadium. in Iowa City, Iowa. The Hawkeyes ran out the clock after the turnover and won 26-20.