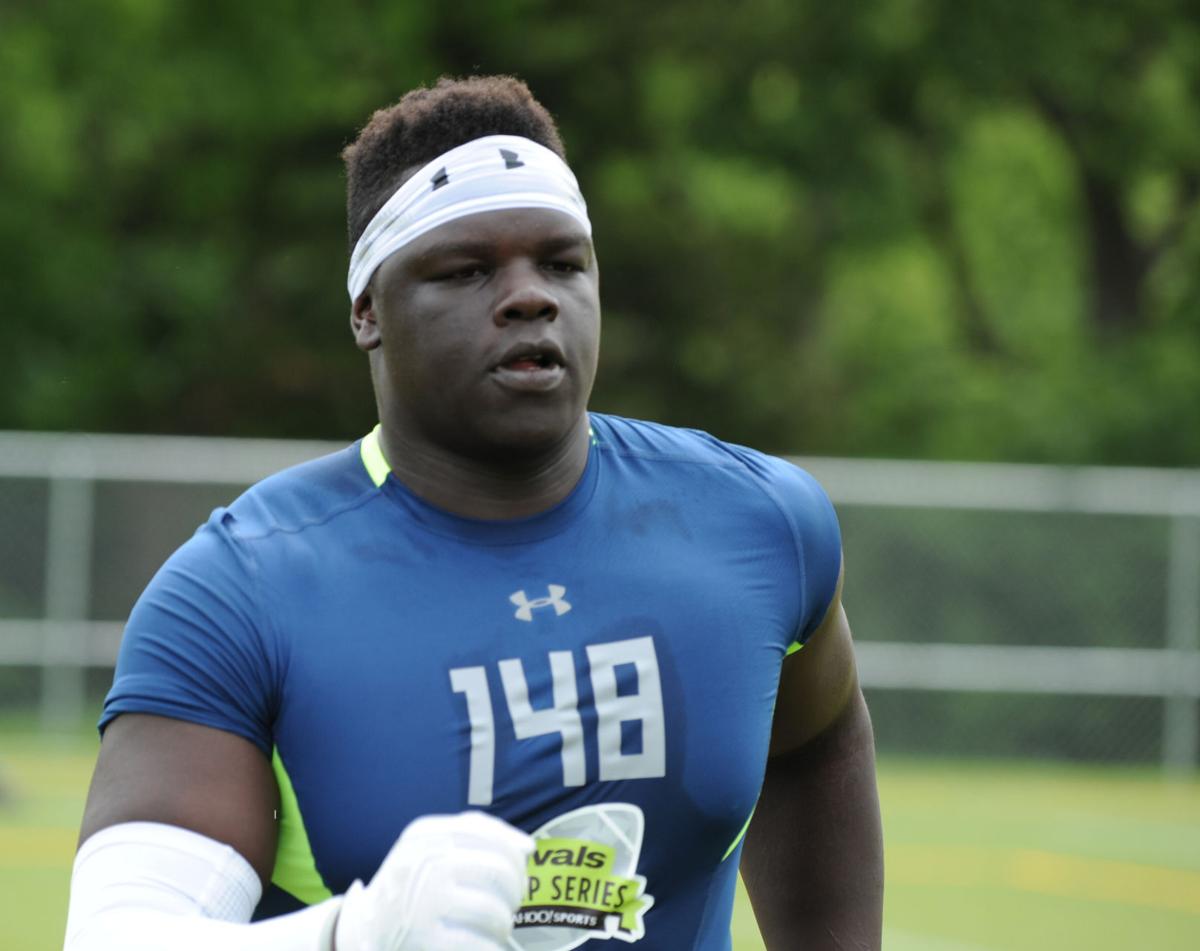 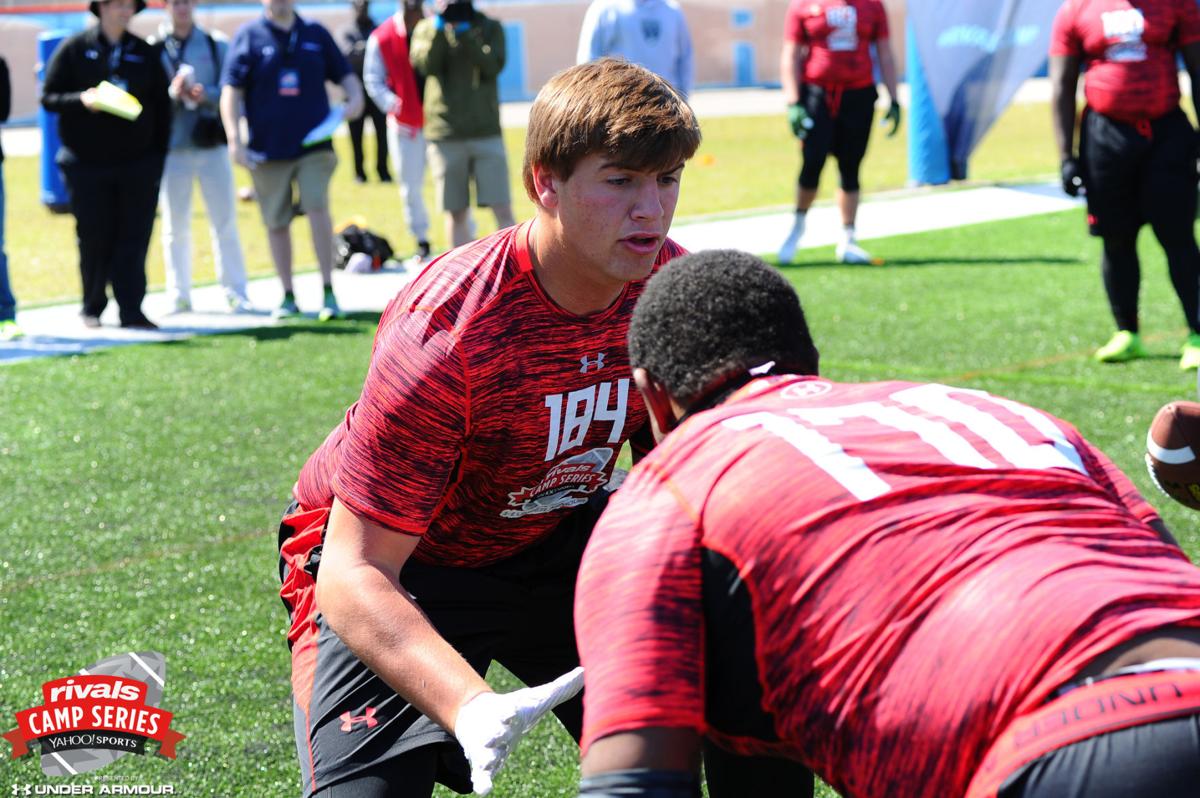 If Masry Mapieu is as fast off the snap as he was Friday night in jumping on a Husker offer, many great football days await him.

The same night the York defensive tackle was offered a scholarship by Nebraska, he said yes, becoming the second commitment in NU's 2018 recruiting class and second Husker recruit of the day.

Earlier, offensive lineman and Lincoln native Broc Bando announced he was pledging to the program, too.

That's 565 pounds between Mapieu and Bando.

"I wanted to play for Nebraska," Mapieu said. "When all these schools were offering, I was waiting for Nebraska to offer."

At 6-foot-5, 285 pounds, Mapieu's recruiting rise has been swift, with offers coming recently from Iowa, Iowa State and even UCLA.

He had yet to meet Husker coaches face-to-face until this week's Friday Night Lights camp.

Mapieu is admittedly a raw prospect, but York coach Glen Snodgrass said the big man showed up well during his first appearance in front of the Nebraska staff.

He was especially strong when it came time for one-on-one drills.

"We've been to several camps and this was one he was really pointing towards and hopeful for an offer, so things went really well," Snodgrass said.

The coach and player had talked in the past about what it means to commit. Wait until there's a school you really, really like, Snodgrass advised him.

The coach had to ask, though: Is there a school you really like?

"He said, 'Well, Nebraska is probably the only one I can think of that would get me to commit right away.' I think he committed right after (defensive line coach John) Parrella offered him tonight," Snodgrass said.

Mapieu has admittedly grown a lot as a person, having dropped some bad tendencies since moving in several years ago with a foster family in McCool Junction.

"I changed," Mapieu said. "From there, I was a different person. Letting people in. Started trusting people."

His foster mom and some of his siblings were there with him on Friday to share in the moment.

After his commitment, they all met at McDonald's for food and ice cream to celebrate.

"I'm so happy for him and proud of him because he's had some rough breaks in life," Snodgrass said. "And he's in a very good place right now. He has worked incredibly hard athletically to get where he's at. He's obviously blessed with size and height and all those things, but he's worked really hard to get where he is athletically. It was really kind of a special night."

It certainly was that for Husker recruiting.

Bando's got an interesting story. Once a student at Lincoln Southeast, he transferred last year to powerhouse IMG Academy in Bradenton, Florida.

"It was a little hard to move away at 16, get out of the house, pretty much go to college," Bando told the Journal Star previously. "But I'm used to it now. It was the right choice I made."

Seems so. It's fair to classify the 6-foot-4, 280-pounder as an in-state commit. Rated a three-star prospect, Bando also had offers from Georgia, Mississippi State, Louisville and Kansas.

Better yet for the Huskers, the plan is for the lineman to enroll in classes in January, giving him a jump start in 2017.

Back in April, Bando told the Journal Star he'd like to have his decision made before his senior season. He admitted it'd be tough to pass on a chance to go back to Lincoln.

"It's a pretty special offer from home. That's where the desire to play football came from," he said. "It'd be a huge opportunity to go back home and play football."

And so he will.

The state-wide tour of Mike Riley and Shawn Eichorst continues on.

Masry Mapieu, born in Egypt, having relocated with family to America at age 2, was now standing in front of the football coach at a high schoo…

You might as well call this one an in-state commitment.

After Riley's invitation, Brenda Tracy wants Huskers to see face of a victim

Brenda Tracy has been waiting for some time to meet this day, but now that it's almost here, she will tell you the complete truth.

The four-star defensive tackle has heard pretty much the same thing from a couple fellow Show-Me-Staters with Husker connections.

There was just something about being on that field, dropping back and planting his feet on that painted red "N," firing spirals into the arms …