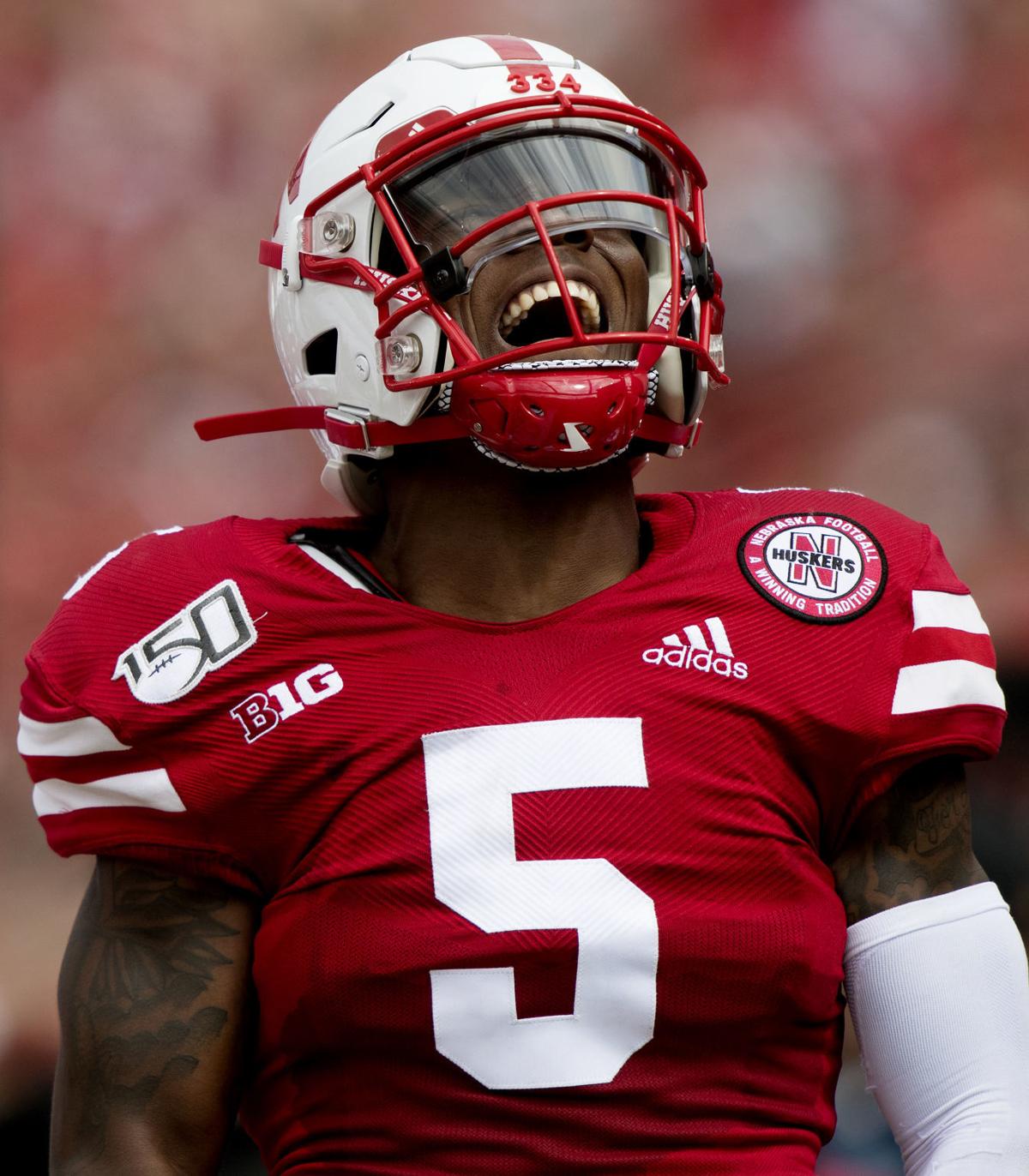 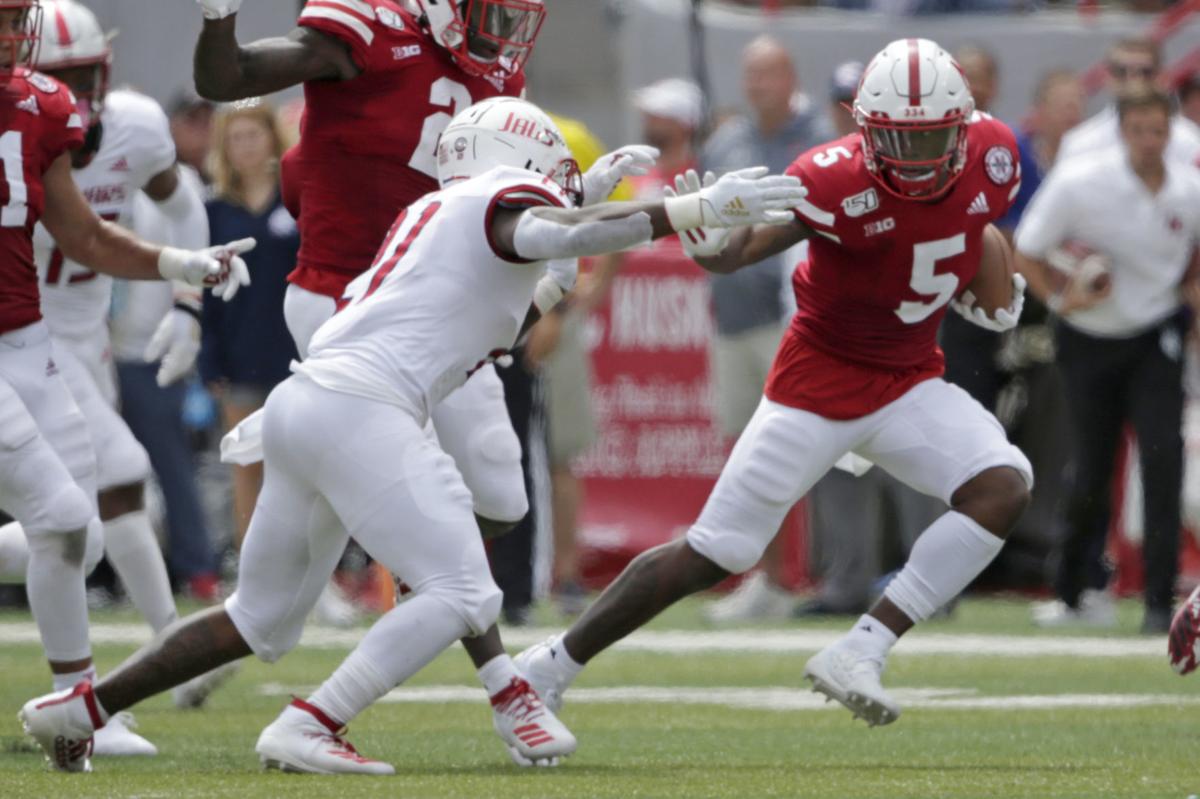 Every good love story has some unique ingredients.

In the case of Darrell and Courtney Britt, the list includes Skittles, Starbursts, Pee-Wee football and a broken finger.

And, of course, the young football player who brought them together by happy — or at least mostly happy — coincidence.

Now a sophomore Nebraska defensive back, Cam Taylor in 2012 was just a youth football player in Montgomery, Alabama, with a pre-practice routine.

“There was a ritual of us buying Starbursts and/or Skittles for the coaches before we went to practice and Cam was like, ‘We’ve got to get Coach D his candy,'” Courtney, Cam's mom, recalled this week. “We’d go by the gas station before practice and we had to get them their candy and it just became this thing.”

“It was weird to me, because I was like, 'Wow, they’re bringing me candy every day,'" said Darrell, who coached defensive backs and had Cam as a pupil. "And I didn’t ask for it and it kind of blew my mind in a sense.

"Me and Courtney, we just kind of started having small talk and talking, and every day, just conversating, and we just found out that we have so much in common and had so much alike,” Darrell said.

Then, there was the finger incident.

“(Cam) and his teammate were, you know, kind of jawing at each other a little bit, and I got in the middle of it before it escalated, and I took a helmet to the hand on my finger and (Cam) broke my finger on his helmet,” Darrell said with a laugh.

A trip to the urgent care followed, and you know how that goes. It takes forever.

“We sat in PriMed for hours that night,” Darrell said.

Over time, though, a serious relationship blossomed.

“It just eventually turned into something we didn’t even plan on and it just kind of happened, which I think is the best,” Courtney said.

The couple was married in 2014, but not before making sure that it was OK with Courtney's kids.

“Cam has had trust issues in the past with different situations and things that have gone on, but once he trusts you, he’s loyal for life. He’s a very loyal kid,” Courtney said. “You see the outgoing and exuberant personality, but he’s my most sensitive kid out of all three of them. He wears his emotions on his sleeve. (He and Darrell) have a really special relationship."

Fast forward four years, and that loyalty sparked an idea in Cam’s mind. He told his mom he’d like to change his name officially from Cam Taylor to Cam Taylor-Britt. It didn’t come to fruition right away, and Cam and Courtney kept the idea a secret from Darrell, but they started the lengthy process this summer.

Paperwork, background checks and a court petition followed. Cam had to go back to Lincoln for the start of camp, but eventually a judge signed off and Cam officially became a Taylor-Britt.

He relayed the news to his stepdad via FaceTime.

“Oh, man, it was overwhelming. I didn’t think it would happen, honestly,” Darrell said. “It says a lot to me. It made me feel like a good job, in a sense. It was a great feeling.”

Cam didn’t mention anything to Nebraska’s media relations people, so his name didn’t change right away on Nebraska’s roster. But the equipment folks were in the loop, so "Taylor-Britt" was sewn onto the back of his red No. 5 jersey ahead of the Huskers’ season opener against South Alabama last week.

The sophomore proceeded to turn in easily the best game of his young career, registering a pair of game-changing plays in the fourth quarter with NU holding a narrower-than-expected lead. He came free on a blitz and blasted USA quarterback Cephus Johnson on the first snap of the fourth quarter, forcing a fumble that Alex Davis recovered in the end zone for a touchdown. Later, he intercepted a tipped pass in the red zone to help preserve a two-score margin.

“It felt great,” Taylor-Britt said. “My stepdad couldn’t be at the game, but he was watching with my little brother at home, and I looked at my phone and he sent me a text message saying, 'It’s on your jersey! It’s on your jersey!’”

The forced fumble showed Taylor-Britt's versatility because he switched from cornerback to safety on the fly, and that play was his first in college at the position.

Taylor-Britt played mostly corner last year and this preseason camp, and he was primarily a quarterback for Park Crossing High before that. When he set out to make the transition full time to defensive back in college, he had an ace up his sleeve: Darrell.

“Any free time we had, if we found ourselves just sitting in the house doing nothing, he’d say, 'Hey, Dad, let’s go to the field,’” Darrell said. “We’ll go out on the field or we’ll sit and watch film. I have a little whiteboard, so we’ll go over stuff on the whiteboard.

“Anything that we needed on the basics for being a defensive back at the college level, we made sure we got covered.”

Courtney and her daughter were in the building for the performance, while Darrell and Jaden, a talented class of 2021 recruit in his own right, watched at home. Both parents said they noticed Taylor lined up at safety early in the fourth quarter and thought a big play was coming.

“I’m sure you saw the photo of us crying, and that was not my intention,” Courtney said. “I was not going up (to Lincoln) to boo-hoo, but I guess the emotions just kind of overcame me once the realization set in of what he actually did as a sophomore.

“I guess it really just hit me on Saturday like, ‘Oh, my gosh, you really did it.’ It was unreal.”

My heart is so full! Proud does not begin to express how I truly feel. Cam, you made your mother cry today, but they were tears of joy. Great job representing your family & the state of Alabama on & off the field! The best is yet to come! (Jeremiah 29:11) 🙏🏽 #GBR #Huskers pic.twitter.com/5sSJpFpNCR

So what’s in a name? Some college coaches don’t put players' names on the back of their jerseys because they think it comes off as being all about the player rather than the team. In this case, that really couldn’t be much further from the truth. In this name — like in anyone’s, really — there are stories, there’s romance and trial and tribulation.

Nebraska redshirt freshman Cameron Jurgens talks about Saturday's issues with high snaps, his road to recovery from injury and his collegiate debut at center.

Last season, Nebraska's season-opener against Akron was canceled because of thunderstorms. And while the Huskers say they didn't play their best game against South Alabama in this year's opener, they at least played a game.

My walk-on story: For walk-ons like Eli Sullivan, it’s about finding 'what special team they can be a dog on'

Martinez vows a better week of preparation for offense: 'It starts with me'

Adrian Martinez may be just a sophomore, but he’s got broad shoulders within the Nebraska football program.

As the Nebraska football team prepares to cross the western border into Colorado for the first time in 10 years, the revival of a long-dormant…

Nebraska freshman linebacker Garrett Nelson passion for his home state program has been on full display for a couple of years now, endearing him to the Husker fan base. His bleach blonde mullet and colorful personality have him hurtling toward cult status.

Husker recruit watch: Husker prospects have big games prior to trip to Lincoln

Nebraska had several unofficial visitors on campus Saturday, including a few from out of state.

Rapid Reaction: Frost touches on Huskers' offensive struggles after looking at the film

Saturday's offensive showing by the Nebraska football team will either be a harbinger of things to come, or the best thing to happen to this team.

A total of 14 Nebraska defenders received Blackshirts last week when the first depth chart was released. Two outside linebackers -- starters Alex Davis and Caleb Tannor -- were among recipients. JoJo Domann was without one, but he may not be much longer.

Husker Rewind: A little bit of everything on the must-improve list for NU offense

The most common question coming out of No. 24 Nebraska’s season-opening 35-21 win against South Alabama was something of a general catch-all s…

Huskers get first commit of 2021 class with Florida defender Sorensen

The 2021 class is off and running for Nebraska and head coach Scott Frost.

Nebraska had a pair of former standouts register impressive accomplishments over the weekend.

Huskers No. 25 in both AP and coaches' poll

Nebraska might not have won overwhelmingly on Saturday, but Associated Press voters didn't mind too much.

Husker coaches' message to defense: Know where Laviska Shenault's at at all times

Nebraska defenders already should know plenty about Laviska Shenault. After all, the Colorado junior wide receiver caught 10 passes for 177 ya…

A look at the latest Big Ten power rankings from Parker Gabriel.

Verduzco says he and QB Martinez were both 'piss-poor' in Week 1, but he's confident in rebound

Mario Verduzco cut right to the chase. Sophomore quarterback Adrian Martinez didn’t perform to standard on Saturday against South Alabama, but his position coach didn’t either.

Scouting Colorado: Breaking down the Buffaloes

Chris Basnett breaks down Colorado ahead of Nebraska's trip to Boulder.

Nebraska will travel a bit heavier this week than it would on a typical conference road trip.

Remember back in July, before Nebraska won its first game of the season but also before the offense looked a little bit stumbly and before a S…