Subscribe
Read Today's E-Edition
Share This
Whatever Illinois does at QB, JoJo Domann will be a critical part of the Huskers' plan to defend it
0 Comments
Share this
Presented By 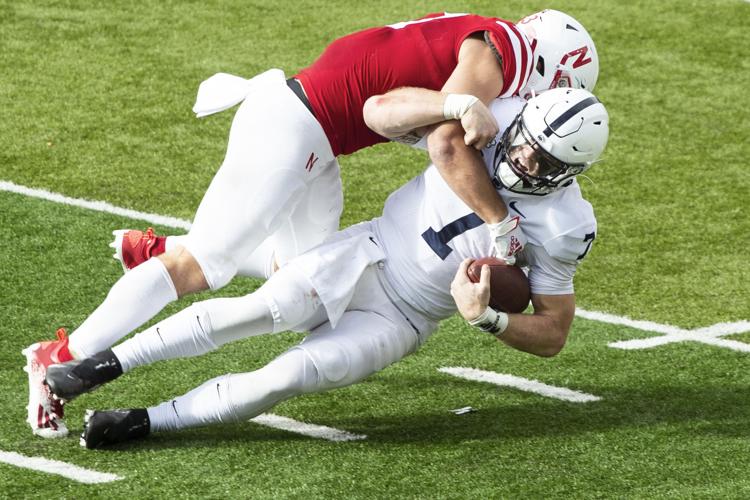 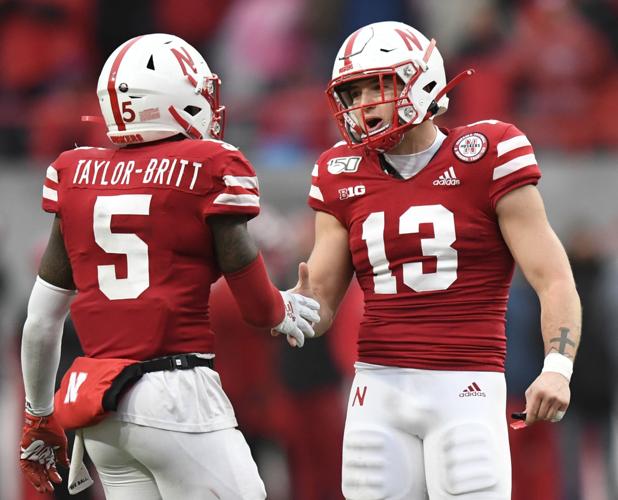 Nebraska cornerback Cam Taylor-Britt (5) and outside linebacker JoJo Domann (13) share a conversation during a game against Iowa at Memorial Stadium in November 2019.

Nebraska is preparing for a bit of a coronavirus-related curveball this weekend against Illinois.

It’s not — at least, at this point — about whether the game will happen, but more about who will play for the Illini.

Illinois lost quarterback Brandon Peters to the conference’s 21-day COVID-19 protocol after its season-opener against Wisconsin late last month and has played its last three games without him.

Red Report: Frost's respect for Lovie; Austin Allen catching on; special teams a plus vs. PSU

Now he should be eligible to get back into the fold against Nebraska, but a promising redshirt freshman turned in an eye-opening performance in a 23-20 win over Rutgers on Saturday.

That’s Isaiah “Juice” Williams, the heralded recruit from St. Louis, who rushed 31 times for 192 yards in the victory in addition to modest passing numbers (7-of-18 for 102 yards). So, who will it be?

“What I see is that our starting quarterback has been out and he’s available this week,” Smith said Monday. “That’s a good option. What I also saw is what our other quarterback was able to do this week. Of course, I’m not going to say what our game plan would be, but I would say we have some good options going into this week.”

That makes for a bit of a mystery on Nebraska’s end, considering the Illini will likely operate differently depending on which guy plays or plays the most.

“The challenge for us is not really knowing who's going to play and who's going to be out there for them and, maybe, what they're going to do on offense depending on who's playing quarterback,” Nebraska coach Scott Frost said Monday. “So we're going to have to get ready for multiple things.”

Peters started last year against Nebraska and completed 9 of 22 passes for 78 yards, a touchdown and an interception, and also ran four times for 16 yards and a score. He’s not the threat on the ground that Williams is, though.

“It’s not like a whole-grade switch in their offense,” Nebraska defensive coordinator Erik Chinander said. “Obviously there’s different tweaks when (Williams) is in the football game and when Peters is in the football game there’s different tweaks involved. So we’ve just got to tweak our scheme a little bit. But as I’ve told you guys before, we see a running quarterback quite a bit, we see (NU quarterbacks Adrian Martinez and Luke McCaffrey) quite a bit and Logan Smothers, so we’ve got some experience defending the quarterback run.”

Nebraska’s front seven has been flexible through three games in both personnel and alignment, but no matter how Chinander and company decide to defend the Illini, they will likely continue to rely on a large number of players up front. Only senior defensive lineman Ben Stille and senior outside linebacker JoJo Domann have been full-time players so far for the Blackshirts.

Domann, in particular, has used his versatility well and allows Chinander to mix and match around him.

“But I don’t think any of us have seen the ceiling on JoJo Domann yet.”

Domann is tied for second on the team in tackles with 23 and has a team-best three tackles for loss through three games. He was on the field for every one of NU’s 91 defensive snaps against Penn State.

“I don't think I saw him slow down one time,” senior inside linebacker Collin Miller said. "Playing 90 (snaps) looked like playing 14 for him.”

Domann might be the most versatile player on what looks so far like a versatile defense. And he’s part of the reason Chinander expressed confidence in his group’s ability to react to whatever Illinois rolls out on Saturday.

In his monthly radio appearance, the Nebraska athletic director also notes that the Huskers' move to the west sideline may be a one-year situation.

Erik Chinander: This tradition (Blackshirts) "just means more to me than having to put everything on social media right now."

After their first win of the season, the Huskers make a move in the rankings, which preview a key battle atop the East division Saturday.

There are plenty of notable moments in the video, perhaps none more captivating than Adrian Martinez' pregame speech.

Nebraska athletes improved upon the university's record for the eighth straight season, and eclipsed 90% for the third consecutive year.

"I want to thank everyone who has helped in the search and has kept an eye out," Connor Culp said. "That was awesome."

Recruit Watch: Elkhorn South's Prochazka, Westside's Bretz will be on opposite sides Friday

A look at how future Huskers performed on the prep gridiron Friday.

Scouting Illinois: Breaking down the Illini

Chris Basnett breaks down Illinois, which needed two interceptions and three tries at a go-ahead field goal in the fourth quarter last week to beat Rutgers.

Make sure the remote control has good batteries. Here is your TV guide to the weekend in college football:

Extension of the recruiting dead period means it now will last more than a calendar year.

In 10 games as a senior, the Hastings quarterback threw for 2,641 yards, completed 59.4% of his passes and logged 31 touchdowns against just seven interceptions.

Some folks suggest Frost should simplify system for young players, but that would be dangerous in an outstanding coaching league.

Earlier this week, Erik Chinander was reluctant to reveal who earned Blackshirts. Scott Frost cleared up that mystery.

Remember that rugged, season-opening four-game stretch on the schedule? That's in the past. So can the Huskers make a run?

Held on the radio: Updates on the Huskers RB room, including the status of Sevion Morrison and Rahmir Johnson

Among other RB-related topics, Ryan Held had uplifting words for Dedrick Mills after the senior's modest start to the season.

Nebraska cornerback Cam Taylor-Britt (5) and outside linebacker JoJo Domann (13) share a conversation during a game against Iowa at Memorial Stadium in November 2019.