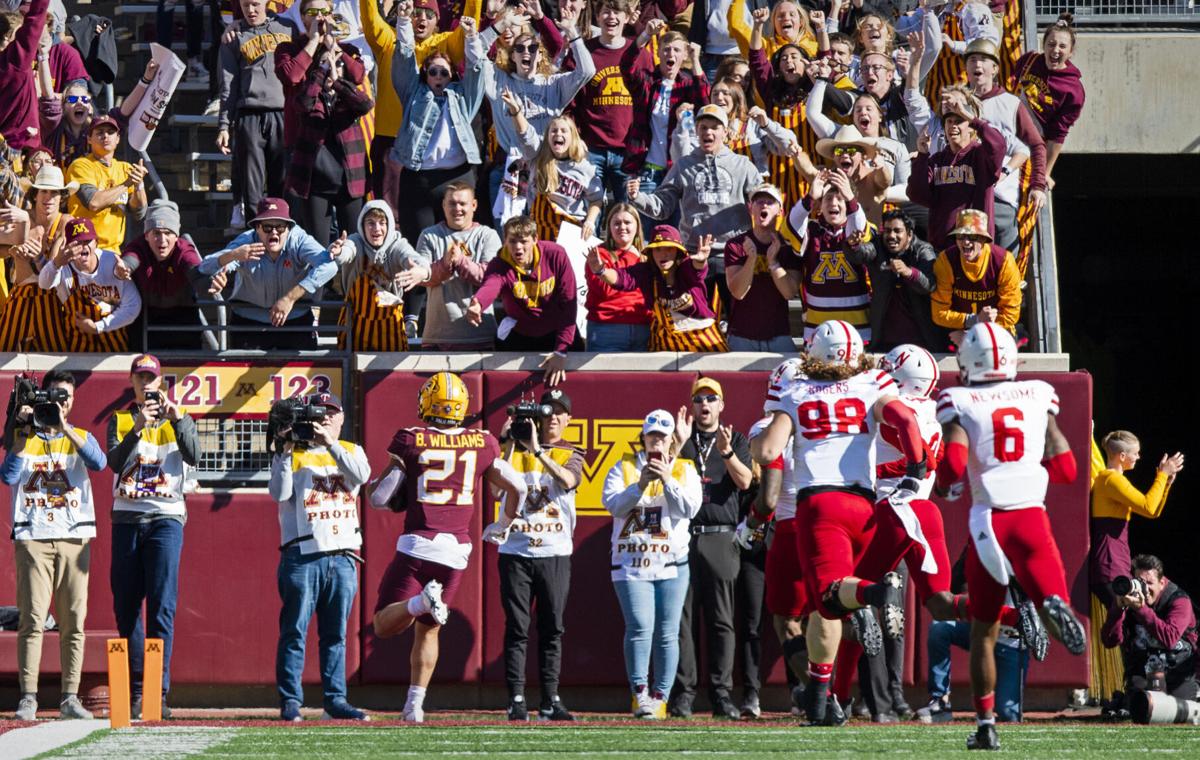 Minnesota's Bryce Williams (21) scores on a 56-yard touchdown run late in the fourth quarter against Nebraska on Saturday at Huntington Bank Stadium in Minneapolis. 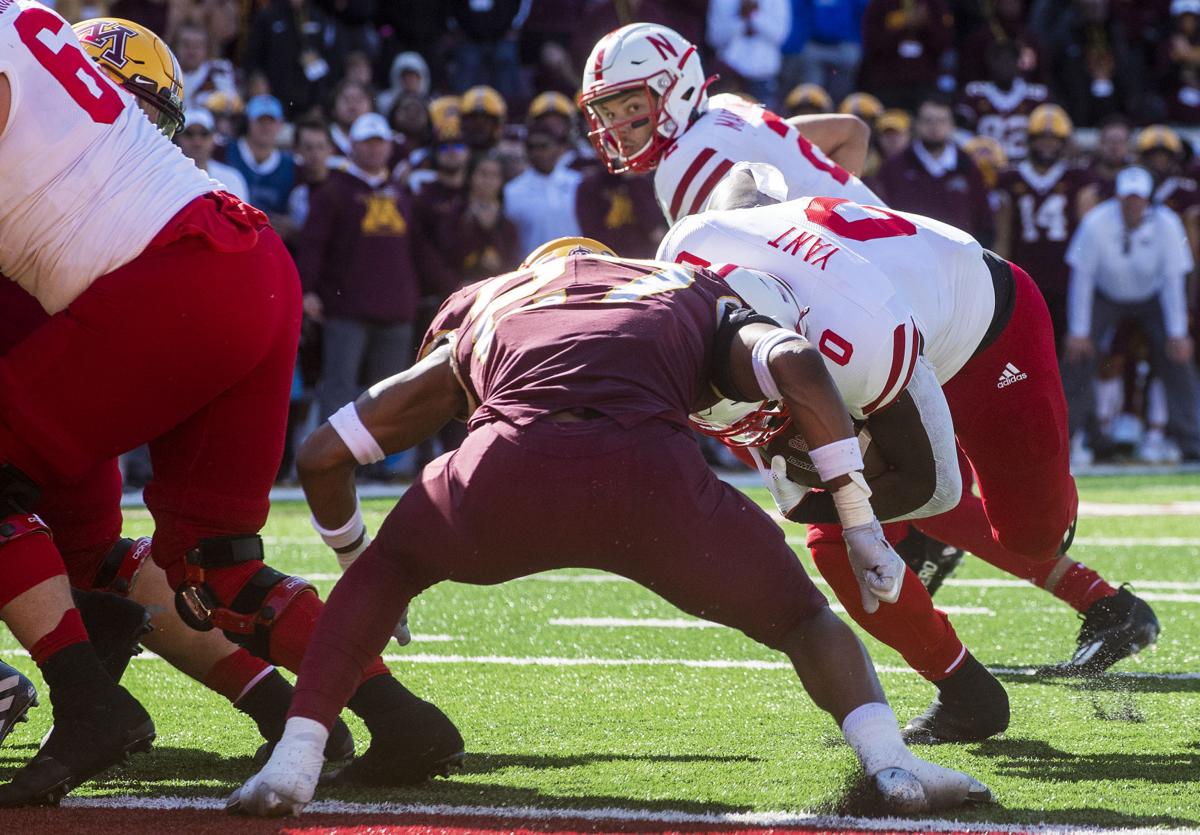 Nebraska quarterback Adrian Martinez (top center) watches as Husker running back Jaquez Yant (0) gets stopped before the goal line by Minnesota's Tyler Nubin (bottom center) on a fourth down in the third quarter on Saturday at Huntington Bank Stadium in Minneapolis. 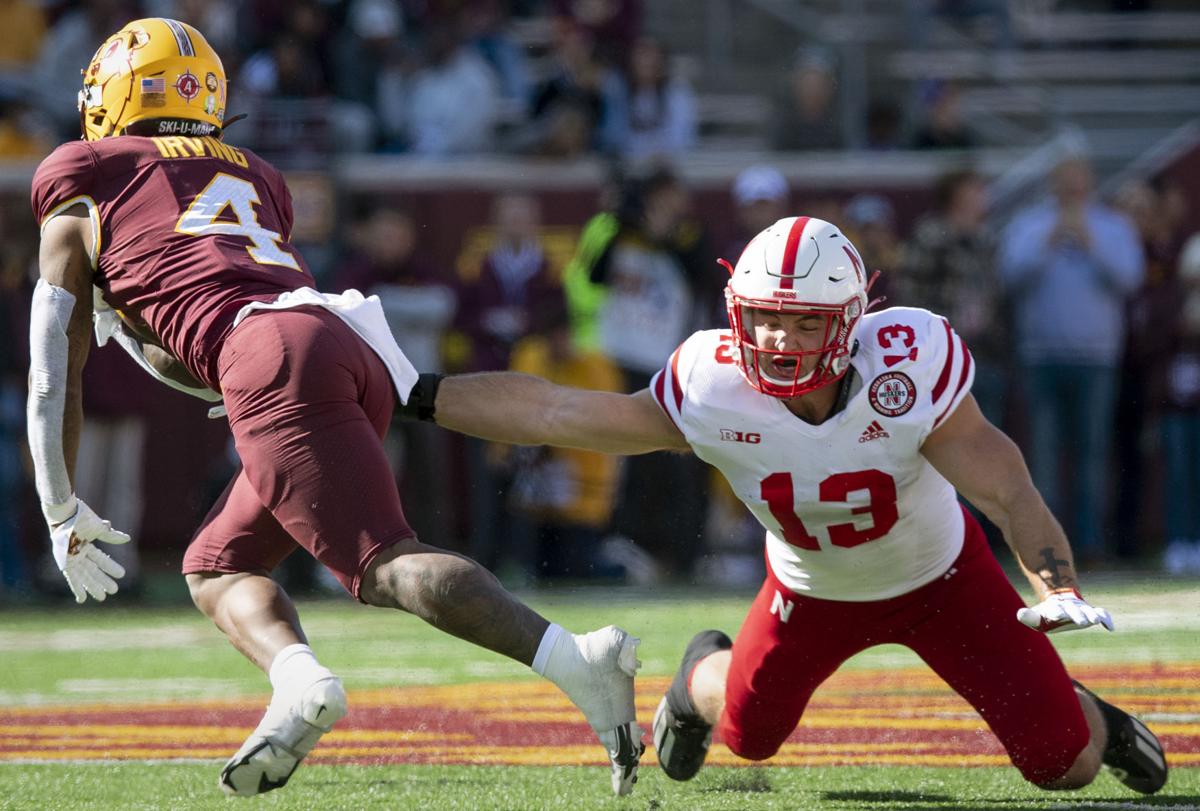 Minnesota's Mar'Keise Irving (4) side-steps the tackle attempt of Nebraska's JoJo Domann (13) during a first-down run in the second quarter on Saturday, Oct. 16, 2021, at Huntington Bank Stadium in Minneapolis.

MINNEAPOLIS — This wasn't the one-sided Minnesota mauling Nebraska football fans had seen in the Huskers' previous two trips north to take on the Gophers.

It only felt that way for a half.

Then, even when the Huskers got back into the game in the closing 30 minutes, it was still a scene those who watch this program every week have become intimately familiar with.

A flat first half gave way to a second half equally filled with big plays and mind-numbing miscues as Minnesota downed Nebraska 30-23 in front of 45,436 fans at Huntington Bank Stadium, and threw a rather large shovel of dirt on NU's hopes of qualifying for a bowl game.

"We keep finding ways to lose. It's crazy," NU linebacker JoJo Domann said afterward. "All of us are part of it, which is the humbling thing about it — you can't just point blame at somebody or someone. Extreme ownership — that's what we need to digest this and move forward."

The loss dropped Scott Frost's Nebraska teams to 5-17 in games decided by one score. For a minute, that stat was out the window after the 56-yard touchdown run from Minnesota's Bryce Williams with 2 minutes, 12 seconds left that gave Minnesota's offense its only points of the second half and marked the first time the Blackshirts were creased for a big run all day.

But, as seems to happen often when things get out of reach for NU, the Huskers suddenly operated like a well-oiled machine to efficiently move down the field and cap Austin Allen's huge day with a 9-yard touchdown catch with 1:12 left that gave the Aurora native five catches for 121 yards and a score.

Nebraska (3-5, 1-4 Big Ten) had lost 34-7 and 54-21 in its last two trips north. A pair of noncompetitive games under two different coaching staffs that illustrated just how large the gap was between Nebraska and relevancy in the Big Ten West.

By halftime Saturday, Minnesota (4-2, 2-1) led 21-9, and it felt like the lead could have been even more. Nebraska may have lost by one score, but the Huskers never led, and spent the entire game playing catch-up.

"I don't know how you can look at it, honestly," said defensive back Cam Taylor-Britt when asked to assess NU's near-misses. "We always come close, and close isn't enough for the record book. It's either a W or an L, and they continue to be L's."

Playing for the eighth consecutive week, the Huskers were flat on both sides of the ball. NU's defense was methodically picked apart by a Minnesota offense missing its top two running backs and an offensive lineman who had played in every game this season.

Minnesota was more than happy to take its yardage in 4- to 5-yard chunks on the ground, and occasionally throw to receiver Chris Autman-Bell, by far the Gophers' most dangerous target, and one Nebraska at times didn't seem all that intent on covering.

But then a bizarre call from Minnesota — a reverse with a flip back to Morgan to try and throw a pass — ended in a sack. While it didn't turn the tide fully, it stemmed the Gophers' momentum enough for NU to get to the locker room down 12.

In the third quarter, Nebraska rolled up 139 yards, held Minnesota to 37, and could still only cut seven points off the deficit.

One drive ended inside the Minnesota 1-yard line when, after quarterback Adrian Martinez was stopped just short of the goal line and after the call was held up on a review, running back Jaquez Yant stumbled and was stopped short on fourth down.

Martinez said thought he was in the end zone. He also thought his forward progress was stopped last week before his fumble set up Michigan for the game-winning field goal. This is life as Nebraska's quarterback in a season when all five losses have been by one score and could have been turned on a play here or there.

"It's tough. It's tough. We just need to continue to get better. It's hard to point to one thing, besides executing down there," Martinez said. "Everyone's got to be on the same page — the amount of detail, attention to detail; that's something we have worked on, something we know is a focal point for us.

"So we just have to keep pushing forward. Have to keep working on those things, and go from there."

On the first play of the fourth quarter, after NU drove to the Minnesota 10-yard line, Connor Culp missed a 27-yard field goal that would have gotten the Huskers to within two points.

With its kicking game once again in shambles, Nebraska went for it on fourth-and-10 from the Minnesota 34 midway through the fourth quarter. The Gophers batted down the pass.

Your Report Card: Nebraska vs. Minnesota

After yet another stop by the defense, Nebraska was set up on its own 11-yard line with 4:53 left and its fourth chance in the second half to take the lead and buck the trend of failure in one-score games.

Instead, Martinez was sacked for a safety as he tried to throw the ball away in the end zone with the pocket breaking down. And Minnesota, which went the entire third quarter without converting a third down, was able to move the chains with 2:21 left. One play later, Williams ripped off his 56-yard touchdown run.

Nebraska started the game by going three-and-out in all of 45 seconds, then allowing Minnesota to embark on a 14-play, 61-yard touchdown drive that melted 7:42 off the clock. The Gophers didn't face a third down until the drive's 10th play. Halfway through the first quarter, the Gophers already had the type of game they wanted.

By the end of the first quarter, Nebraska had run eight plays and kicked a 50-yard field goal. Minnesota had possessed the ball for 11:41, and the league's worst passing offense was 9-for-10 for 72 yards.

Gophers quarterback Tanner Morgan, who hadn't completed more than 14 passes in a game this season, connected on 16 in a row spanning the first and second halves to set a school record for consecutive completions.

Morgan got to 16 in a row, then completed his next two to Nebraska defensive backs Cam Taylor-Britt and Deontai Williams. The third-quarter interceptions helped nudge momentum towards the Huskers.

Even those big defensive plays didn't come without a price, though. Williams, who looked like he had plenty of room to run on a potential return, instead crumpled to the ground after trying to plant his left foot. He walked off the field, but the sixth-year senior didn't return.

Nebraska turned the Williams pick into a Rahmir Johnson touchdown to get within 21-16. The number was 16 because Culp, after making that 50-yard field goal, missed an extra point. The second extra point barely had enough to get over the crossbar.

In the fourth quarter, Nebraska eschewed trying to convert a fourth-and-4 from the Minnesota 19, and Culp missed a 27-yarder.

"We had every opportunity to be in control of the game after the third quarter," Frost said.

Instead, Nebraska staggers into its bye week. One that's needed to rest the bodies and minds of everyone in the program. And one to examine the questions of where the rest of this season may go.

Parker Gabriel and Chris Basnett break down Huskers-Gophers, and field your questions

It's a crystal clear, brisk October morning in Minneapolis. One pregame note is the offensive line, which is a little bit shorter on depth than usual.

Nebraska vs. Minnesota, coming at you from Minneapolis. Follow the action with us.

Here are four areas that factored into Nebraska's loss at Minnesota on Saturday.

Lisa Falck sported her red No. 88 jersey, and wore her emotions on her sleeve — "Oh my gosh, I've got tears in my eyes."

The closer Nebraska's offense gets to pay dirt this season, the more it sputters and spins its wheels in the mud outside of it.

Yes, Nebraska will have plenty of time to recover physically after playing eight straight weeks to open the season. But there’s also work to do.

Scott Frost hit a few key talking points on his weekly television show, including the health of Deontai Williams and Adrian Martinez.

Nebraska will come off its bye and host a division foe in the afternoon.

Nebraska's 2022 recruiting class is already small and it got smaller on Tuesday evening.

After career-best game, Austin Allen trending toward one of best TE seasons in recent Husker history (and maybe ever)

The Aurora native said he hoped the "flood gates are open now" after a big game against Michigan. He followed that up with a career-best outing.

Minnesota's Bryce Williams (21) scores on a 56-yard touchdown run late in the fourth quarter against Nebraska on Saturday at Huntington Bank Stadium in Minneapolis.

Nebraska quarterback Adrian Martinez (top center) watches as Husker running back Jaquez Yant (0) gets stopped before the goal line by Minnesota's Tyler Nubin (bottom center) on a fourth down in the third quarter on Saturday at Huntington Bank Stadium in Minneapolis.

Minnesota's Mar'Keise Irving (4) side-steps the tackle attempt of Nebraska's JoJo Domann (13) during a first-down run in the second quarter on Saturday, Oct. 16, 2021, at Huntington Bank Stadium in Minneapolis.