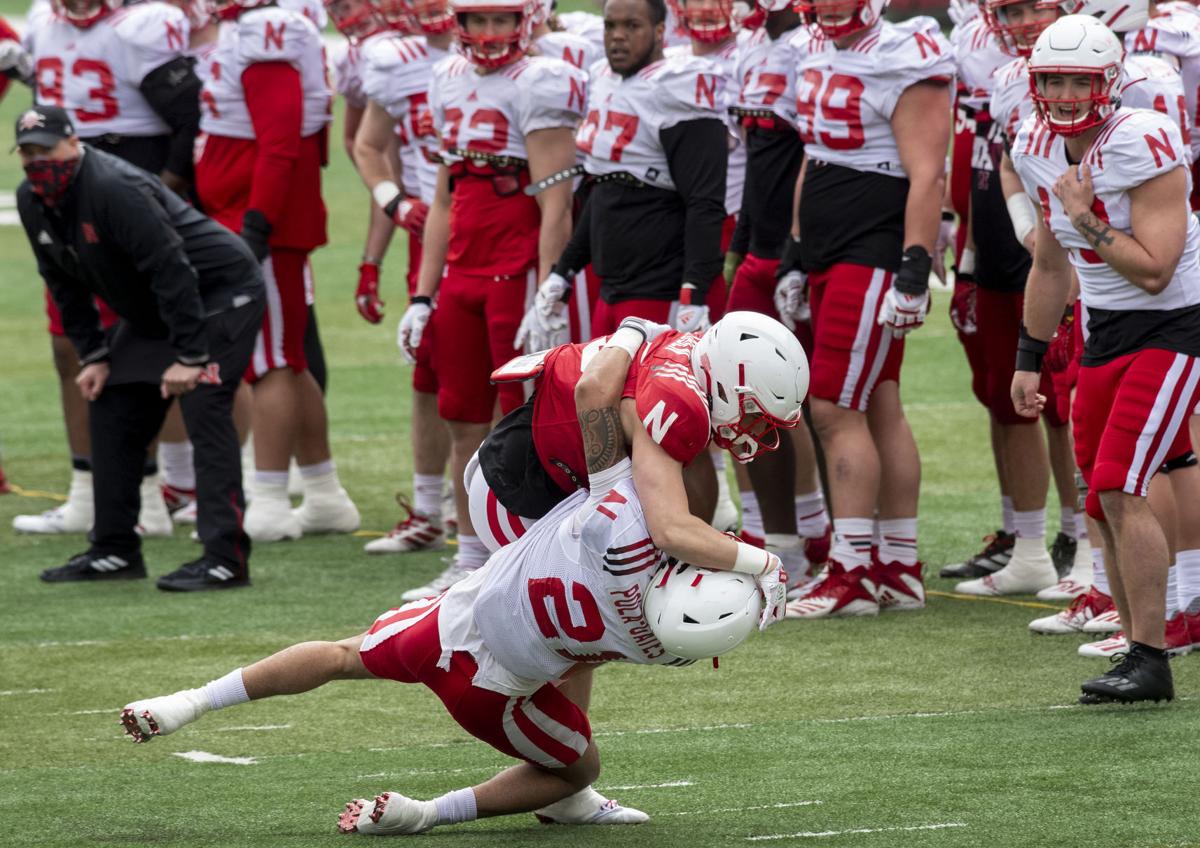 Nebraska running back Trevin Luben (35) runs with the ball against safety Noa Pola-Gates (21) on Saturday during a football practice at Memorial Stadium. 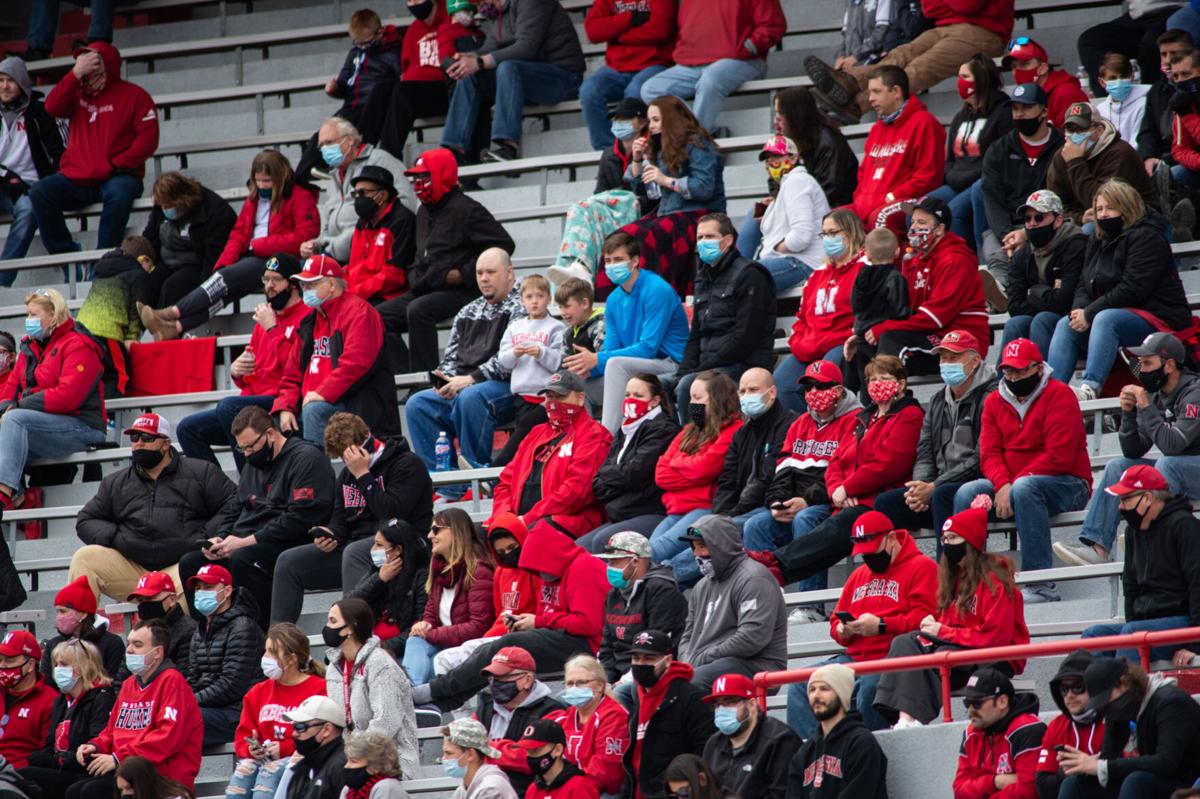 Fans returned to Memorial Stadium for the first time since 2019 for a Husker football practice Saturday.

Between the crisp weather, the breeze tunneling down Stadium Drive and the red-clad patrons making their way toward Memorial Stadium on Saturday afternoon, one could have almost mistaken April 17 for Oct. 17.

OK, maybe not quite, but more than 3,000 fans gladly snapped up free tickets to watch the Huskers practice two weeks before a much bigger crowd will convene for the Red-White Spring Game.

It marked the first time since November 2019 that the general public has been allowed inside the historic building. Last year's spring game was canceled due to the coronavirus pandemic, and the Big Ten only allowed for parents and a very select few to attend regular-season games in the fall.

Big screens are nice and all, but there's just something different about the real thing.

"It's exciting because it's been a long time," said longtime Lincoln resident Brady Skinner outside the stadium as he and his 7-year-old son, Justus, made their way toward their seats.

Skinner tries to make it to a game or two each season, but Justus had never been inside. Asked if he was looking forward to seeing the Huskers, he smiled big from behind a mask and nodded his head.

"It's just not the same (to watch on TV) as it is to be here in person and hear the crowd roar," he said. "At least having a season was better than nothing, but being here in person is what we were looking forward to."

If the Skinners stayed until the very end, they saw some additional father-son fun when coach Scott Frost's son R.J. ran into the post-practice huddle and yelled, "Dad!" Frost picked him up and ended practice with him over his shoulders.

The approximately 3,200 onlookers clapped at the end and many of the players returned the appreciation by coming over to the West Stadium stands, waving, taking pictures, giving high-fives and even signing a few autographs.

The doors opened at 1:45 p.m. and before the team was even through its preliminary stretching and opening practice periods, a couple of robust "Go Big Red" chants had echoed through the stadium that sat nearly empty for more than a year.

Chris Ross, 65, made the trip from Plattsmouth and entered the stadium interested to see what junior quarterback Adrian Martinez looked like and how a young offensive line would protect the likely fourth-year starter.

“I think the receivers will be a crucial part if we give Adrian time to pass to them," he said. "I’m not worried about the defense.”

The music blared, fans oohed and ahhed at big plays and no doubt scribbled some notes or at least catalogued mentally what they think about a team that's gone 12-20 over Frost's first three seasons at his alma mater.

“It’s hard sometimes," Ross said of the recent struggles, "But I have to stay true to being a fan. As you get older, you learn you can’t get as mad about it.”

There wasn't much to be mad about on the first Saturday in 70 weeks that the Sea of Red began to trickle back into its home.

Photos: What a Husker football practice (with fans!) looks like

There was plenty for Husker fans to like about Saturday's practice. But fan anxiety should be expected right now.

When the end of May arrives, it will have been nearly 16 months of high school athletes not being able to formally visit campuses.

A native of Suwanee, Georgia, Quinton Newsome helped himself adjust to Lincoln by being friendly to basically everyone he encounters.

'A freak of nature': Transfer Kolarevic has fit in well to suddenly veteran Husker ILB room

Since arriving on campus, Kolarevic said he’s blended in well with the group and that he’s excited about the unit’s potential going forward.

Nebraska is allowing fans to buy up to 10 tickets at a time now for the spring game.

After playing 'like a robot' in 2020, Husker OLB Pheldarius Payne feels he's ready for a jump

Nebraska made the decision to move Pheldarius Payne to outside linebacker after his weight loss.

Nebraska running back Trevin Luben (35) runs with the ball against safety Noa Pola-Gates (21) on Saturday during a football practice at Memorial Stadium.

Fans returned to Memorial Stadium for the first time since 2019 for a Husker football practice Saturday.