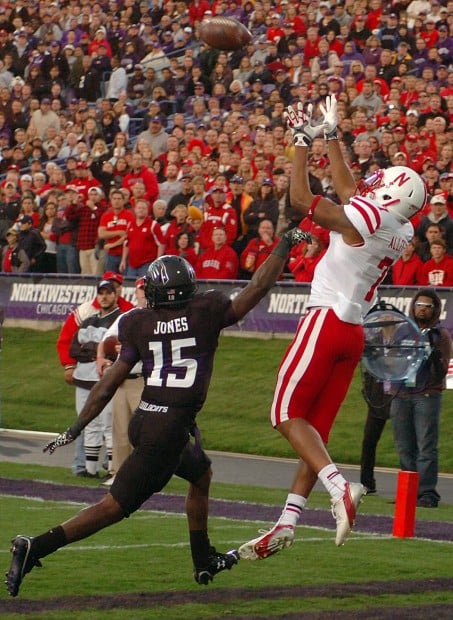 Nebraska's Taariq Allen catches a pass over Northwestern's Daniel Jones for a touchdown in the fourth quarter in Evanston, Ill., on  Oct. 20, 2012. 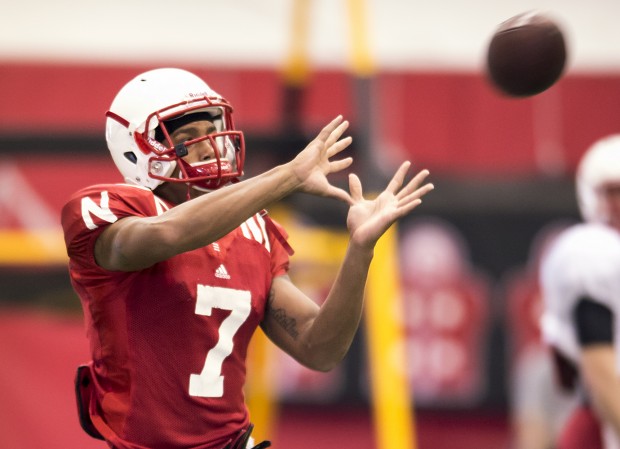 From the stands, the pass seemed destined for a date with the turf.

But the determined wide receiver — you’ll soon see how aptly the adjective “determined” fits — had another view. He turned on his jet pack to meet the ball in the corner of the end zone, readjusting his body to make a play that was anything but routine.

Then you saw the official's hands go up. Then you heard the roar from offensive teammates, running to meet the man.

Taariq Allen had caught the ball and served up another reminder: He’s not messing around this spring.

What he doesn’t think about is the serious knee injury suffered in the Michigan game in 2012. A week after catching his first career touchdown, a leaping grab that sparked a Husker rally at Northwestern, Allen was carted off the field after the opening kickoff.

It was brutal, the kind of damaging injury where you see a player still hobbling around six months later and wonder if he'll be able to climb all the way back.

“I was in a dark place for a long time, but I couldn’t be like that, I couldn’t live like that,” Allen said. “It wasn’t healthy for me being in that dark place, having my mindset all messed up.”

It was dark for at least a couple months after the injury. Allen kept coming back to one question: Why? Why’d that have to happen to me?

No answer to such a question ever drops from the sky. But that doesn’t stop one from asking it again and again.

“I started feeling sorry for myself, and that’s the one thing you can’t do, is feel sorry for yourself,” Allen said. “You got to just (rise) up. Be a man about it. Get back. Respond. How you going to respond?”

It was a pep talk from former Husker assistant trainer Jeremy Busch (now the head trainer at Texas Tech) that the receiver said he still remembers.

“He just said, ‘We gotta kill this thing. Gotta kill it and attack,’” Allen said. “That’s what we did.”

That explains the heartfelt responses given by Husker coach Bo Pelini whenever Allen’s recovery is brought up. Pelini believes the receiver is now back to his old self. And it’s hard to argue that as spring practice unfolds.

Take Monday, for example. Two days after that touchdown catch in a scrimmage, there’s the 6-foot-3, 200-pound Allen rising into the air and once again making the catch of the day while hugging the sideline.

“Tough kid,” Pelini said. “He's about the right things. The type of kid you want on your football team. It's a testament to how hard he worked. He worked his butt off and it paid off for him.”

And while Allen wouldn’t wish such an injury on anybody, he can now pluck a positive from his rehab experience. He learned something about himself.

“I just learned to be patient and to humble myself down to the most humble place,” he said.

Humble but not scared. Not only did Allen return to the field to see some action in 2013, he saw most of it working on special teams, doing the same thing that provided him with his rehab obstacle.

“Honestly, I just don’t think about it,” Allen said. “I think about the guys coming down and my assignment and what I have to do to be successful and get the offense back the ball.”

Jumping over the mental hurdle after an injury such as Allen's can often be the most difficult task of all.

But Allen clearly has moved beyond it. He wants to not only be dangerous in the passing game, but also relishes the challenge of knocking around defensive backs as a downfield blocker.

“We have a chart where we record extra effort, blocks, knockouts, takedowns, everything,” Allen said. “We got this thing called ‘Perimeter Warrior’ given at the end of the year. Quincy (Enunwa) got it for three years straight. I’m trying to be that next guy to get my face on that wall. Everything I do is about being aggressive.”

Allen has mostly been working with the second team in practice, with work still to do to get to the top of the depth chart with Sam Burtch also on the rise.

But the darkness is gone. The light has turned green.

That's why a conversation with him keeps finding its way back to the same words.

You have to be cautious with comparisons. Bo Pelini knows it. This is why he proceeds with care as he talks about the potential of Maliek Collins.

NU reserve QB Fyfe says this spring 'huge' for him

Nebraska's Taariq Allen catches a pass over Northwestern's Daniel Jones for a touchdown in the fourth quarter in Evanston, Ill., on  Oct. 20, 2012. 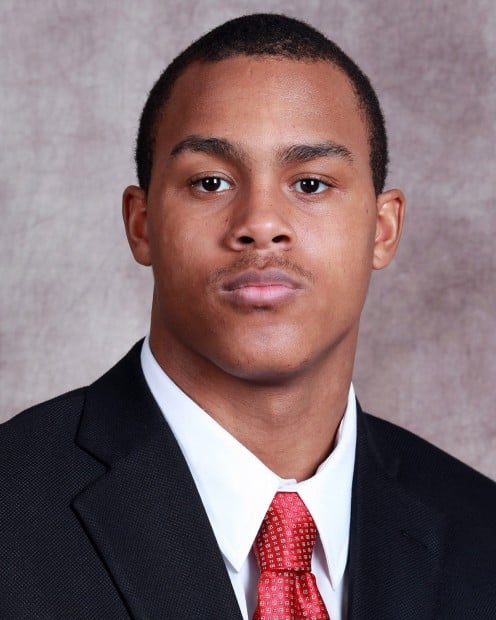