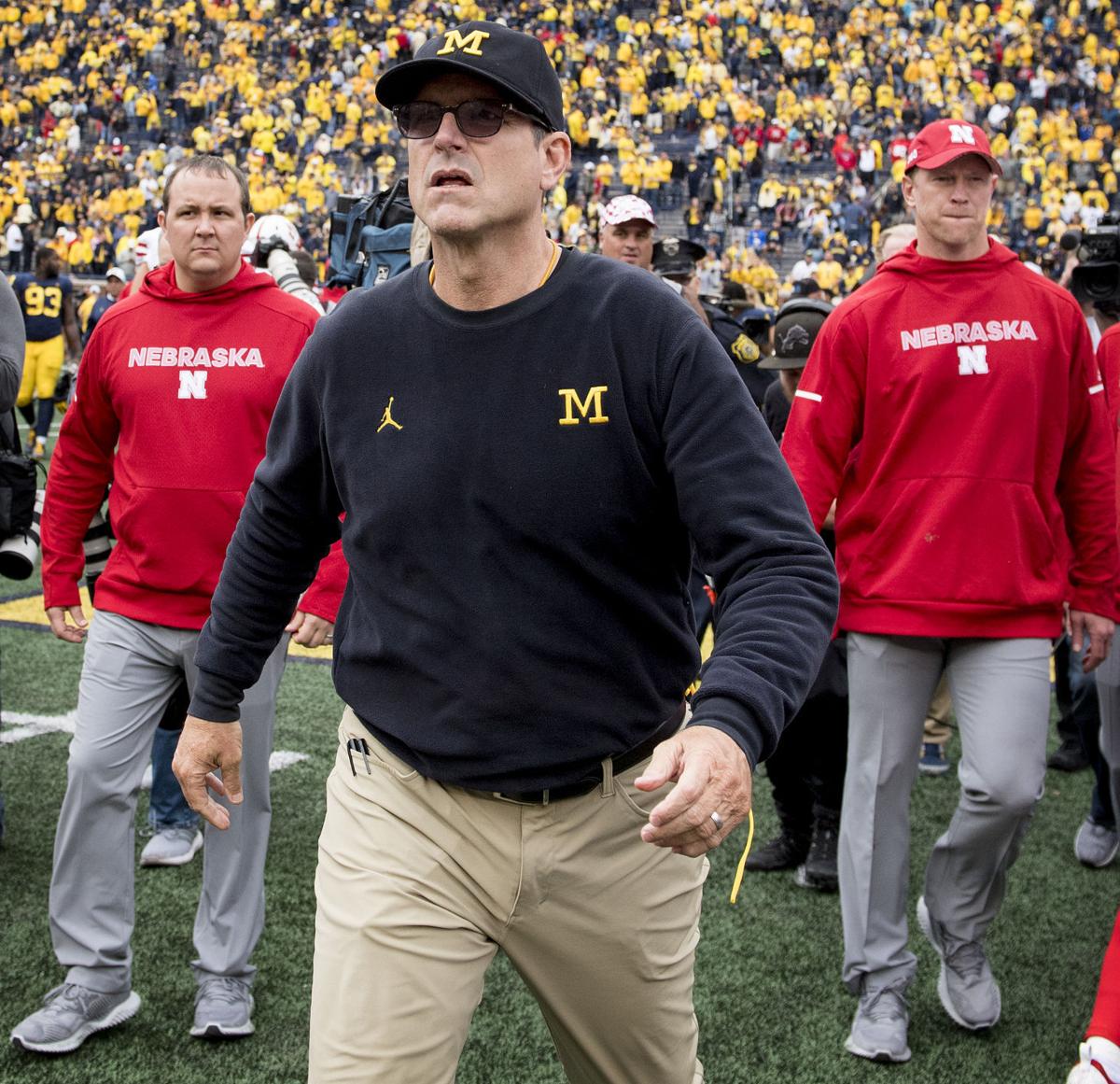 Michigan head coach Jim Harbaugh (center) and Nebraska coach Scott Frost (right) walk off the field after the Wolverines' 56-10 win over the Huskers at Michigan Stadium on Sept. 22, 2018. 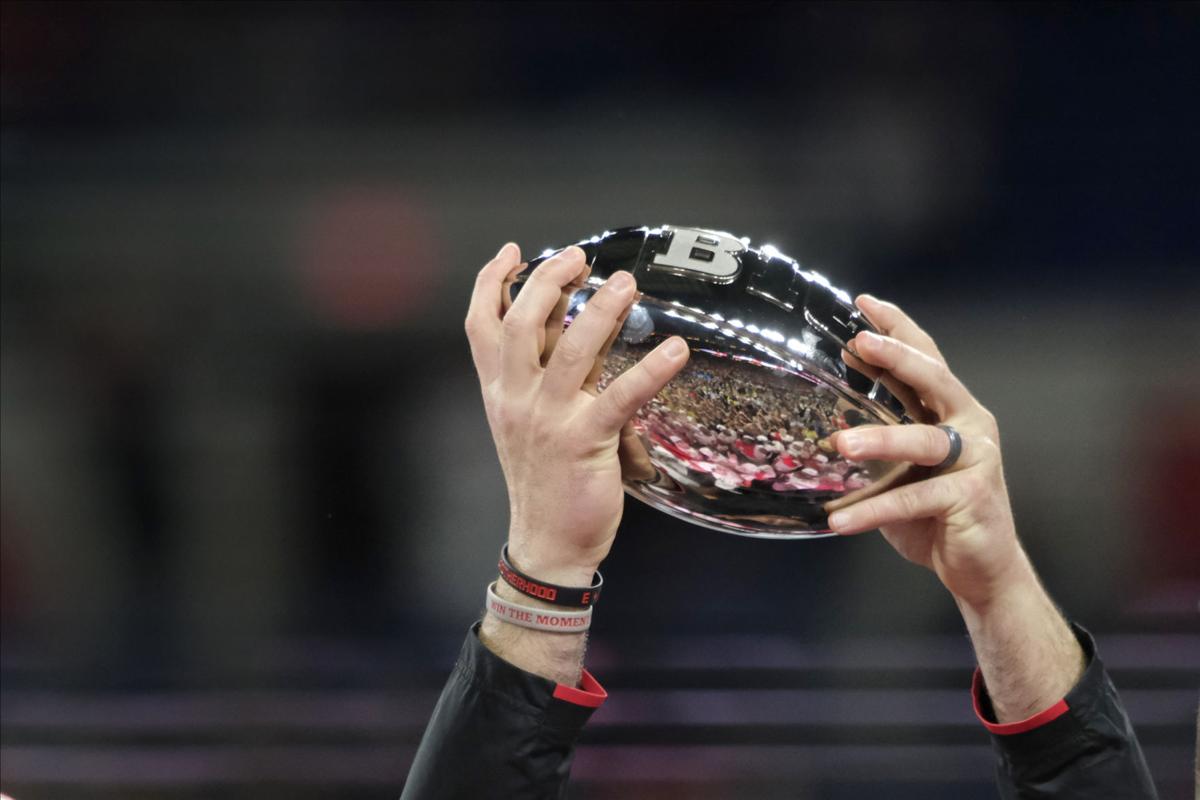 That's the overarching question facing Nebraska and the Big Ten after Tuesday's announcement that fall sports were canceled.

There is a long, long way to go before anything is fully decided. But here's a look at a few of the biggest questions facing NU and the league moving forward.

The biggest question of them all, and one that opens up a whole world of issues at every turn. The Big Ten has appeared disjointed in its approach to the fall season, culminating with Tuesday’s news and an awkward television interview from Commissioner Kevin Warren.

Some of the league’s most prominent coaches — Scott Frost, Jim Harbaugh (Michigan), and Ryan Day (Ohio State) among them — spoke out against postponing only 24 hours prior to the fall season getting canceled.

There certainly appears to be disorganization, which won’t fly if the Big Ten truly wants to play in the spring.

Just look at the potential issues facing a spring season: Will COVID-19 be any more under control by then? Will even more players opt out of college to get ready for the NFL?

What happens with early enrollees such as Latrell Neville? Would they be allowed to play? Would a spring season count against their eligibility?

sooooo what does that mean for us early enrollees??? https://t.co/vjZIgJPhqm

And for a league and commissioner that has trumpeted player health and safety over and over and over again, how will the Big Ten square canceling a fall season with playing a spring season and then trying to turn around and start another fall season a few months later?

Just how crazy could the spring get?

There are only so many days to get things in during the spring time. And in a place like Nebraska, springtime isn’t exactly predictable for weather. An already untenable situation could devolve into total chaos when it comes to scheduling not only games, but practice time in places such as the Hawks Championship Center.

How would Husker fans divide their time? Would attendance suffer at some events because of others taking place at the same time?

Everything is on the table right now, with no real clear answers as to how it all might fit together when the calendar rolls over to 2021.

Can the Huskers play this fall?

Scott Frost said Monday on Nebraska would explore every avenue to play in the fall. A statement from Nebraska’s leadership Tuesday indicated the same. But could NU actually go rogue and put together a fall schedule?

Iowa athletic director Gary Barta, who also pushed to play in the fall, on Tuesday referenced “membership criteria” that would not allow schools to play outside of the league.

Would there be consequences to Nebraska defying the Big Ten and setting up games with its old Big Eight/Big 12 foes, for example? Would the league relax any such “membership criteria” to let the Huskers play?

And don’t forget this, either. If Nebraska is able to cobble together and play a schedule this fall, no matter how many games it is, would the Huskers then turn around and try to play again in the spring?

What does this mean for winter sports?

If it wasn’t already, the shot clock just started ticking for college basketball to figure out what will happen in the coming months.

Division I teams can begin preseason practice 42 days before their first regular-season game. For Nebraska, that means a start date of Sept. 29.

That almost certainly is off the table now. There have been whispers in recent weeks of the Big Ten moving to a conference-only schedule starting sometime in 2021, and those whispers will only grow louder.

In July, Nebraska coach Fred Hoiberg said any scheduling decisions would likely come out of whatever happened in the fall.

“We’ve got a couple things that will happen before our sport with pro sports and with college football, and with volleyball and soccer,” Hoiberg said. “So we’ll have a pretty decent idea from those sports”

At the junior college level, the plan is for practice to begin Jan. 11, with games starting Jan. 29 and ending March 27. Would the big schools adopt something similar?

This is to say nothing of wrestling, in which the Big Ten is far and away the most powerful conference in the country.

The league had four of the top five teams in the in the final NWCA coaches poll (Nebraska was No. 4 nationally), and 10 of the top 25 programs nationally.

The wrestling season is concurrent with basketball, starting in early November and wrapping up in mid-March. What kind of schedule will those teams have?

The Big Ten commissioner was pressed about whether or not a league team could pursue its own schedule.

It started with breakfast and a Big Ten schedule release. And then things went south in a hurry

Just six days ago, we were eating waffles and eggs while the Big Ten provided hope of a season with a schedule release. After lunch on Tuesday, things had flipped the other way.

The Big Ten's decision to postpone its fall football season has dominated the national sports conversation since Tuesday afternoon, and not ev…

College football in the spring: When? How much? Who plays?

Back in April, not long after the NCAA basketball tournament was canceled because of the coronavirus pandemic, the idea of moving the 2020 col…

Steven M. Sipple: Frost catches heat from pundits, but has absolutely no reason to apologize

Big East will not have sports in the fall

The Big East Conference, which includes Creighton, announced Wednesday that it will not play sports in the fall.

Michigan head coach Jim Harbaugh (center) and Nebraska coach Scott Frost (right) walk off the field after the Wolverines' 56-10 win over the Huskers at Michigan Stadium on Sept. 22, 2018.