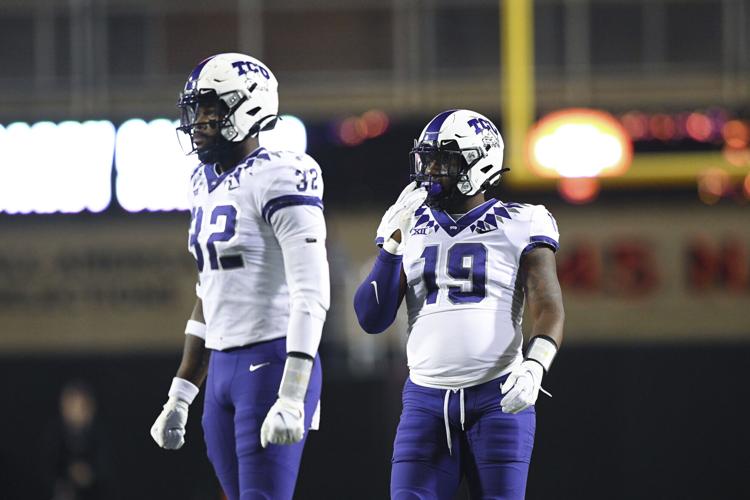 TCU defensive end Ochaun Mathis (32) waits for the next snap during a game against Oklahoma State on Nov. 13, 2021, in Stillwater, Okla. 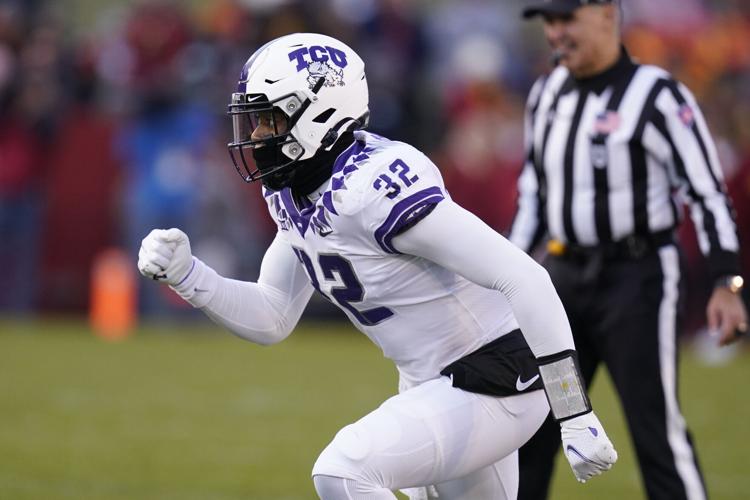 Ochaun Mathis runs on the field during the first half of a Nov. 26, 2021, game against Iowa State in Ames, Iowa. After two seasons at TCU, Mathis committed to Nebraska on Saturday.

Ochaun Mathis stands on the field before the Red-White Spring Game April 9 at Memorial Stadium. Mathis committed to the Huskers on Saturday.

Life in the Red Podcast: A couple of big portal decisions coming up for Husker targets plus hoops — and a farewell

Nebraska’s reinforcement of a thin defensive front is underway.

Ochaun Mathis, a defensive end who starred for two seasons at TCU, announced Saturday he's headed to Nebraska to play in 2022.

The Athletic had Mathis listed as the best player available in the transfer portal.

He ultimately selected Nebraska over Texas, doing so via social-media video.

He told thousands of viewers that both schools and fan bases "showed much love to me and my family."

"You had us all feel welcome coming in and out of Austin (Texas) and Lincoln, Nebraska," he said.

"I'm very nervous," he added before placing a red Nebraska ball cap on his head to the delight of friends and family on hand at his ceremony.

He visited Nebraska on April 9 for the Red-White Spring Game, and made multiple visits to Texas' campus in Austin.

In mid-February, he narrowed his list of possible transfer options to five. USC, Ole Miss and Penn State also were in the mix.

Junior outside linebacker Garrett Nelson led Nebraska last season in both sacks (5.0) and tackles for loss (11.5), and no other Husker had more than two sacks.

Enter Mathis into the equation. The 6-foot-5, 260-pounder started a total of 34 games for TCU. He recorded 45 tackles, including seven for loss and four sacks this past season. That followed a breakout campaign in 2020, when he led the team with nine sacks and ranked second with 14 tackles for loss.

So, yes, it’s a big get for Nebraska.

For a while during the process, it seemed Texas was the favorite in the race. After all, Mathis is a native of the state. That, combined with the fact that his former coach at TCU, Gary Patterson, is now on the staff at UT, made the Longhorns a perceived favorite.

In a recent YouTube video, Mathis said he hopes to become "one of the next legendary defensive ends of whatever school I go to."

Legendary defensive end? Nebraska definitely could use that right now.

Former Texas Tech defensive lineman Devin Drew, 6-foot-3 and 280 pounds, appeared in all 23 games for the Red Raiders over the past two seasons after transferring to the school from Iowa Western Community College. A Raytown, Missouri, native, Drew compiled 34 tackles in 13 games last fall and had 55 total over his two seasons in Lubbock, Texas.

He took an official visit to Nebraska last weekend and reportedly also visited Illinois while fielding interest from a host of other Power Five schools. He has one season of eligibility remaining.

Drew's statistical profile is indeed impressive, as he logged 512 snaps in 2021, according to Pro Football Focus data. He saw extensive action in both running and passing situations and, according to PFF, was the Red Raiders’ top-graded rush defender for the season.

For reference, 512 snaps (in 13 games compared to NU’s 12) means Drew played more snaps than any NU defensive lineman except for Ben Stille (560). Next among NU interior defensive linemen was Ty Robinson (458).

Stille is one of several contributors for the Huskers that is not returning in 2022, although he’s the only of the departures that exhausted his collegiate eligibility. Damion Daniels and Deontre Thomas decided to explore their professional prospects and not return for a sixth college season, while Jordon Riley transferred to Oregon. Then, the most recent big hit: Casey Rogers entered the transfer portal after spring ball concluded.

That leaves Robinson and a host of inexperienced players like Nash Hutmacher, Mosai Newsom, walk-on Colton Feist and even younger options up front. Which is why the Huskers are hoping to add more than just Drew to their defensive line collection.

Before Drew played for Texas Tech, he appeared in 22 games over two seasons for Iowa Western in Council Bluffs. Over those two seasons, he racked up 14.5 sacks and 23.5 tackles for loss to go along with five forced fumbles and 97 tackles overall.

After going undrafted, Domann signs with Colts; What other Huskers signed free-agent deals?

After he was projected as a mid-round prospect leading up this weekend, JoJo Domann did not hear his name called in the NFL Draft.

Toure's phone was starting to buzz with undrafted free agent options. Then, with six picks to go, Green Bay called his name.

"They were so attentive about every little aspect of the program," Ochana Daniels said of the family's April 7-9 visit to Nebraska's campus. "I mean, the entire staff met us and I was like, 'Wow, this is totally different than any official or unofficial visit we've ever had.'" NU's work obviously paid off handsomely.

The NCAA released a list of penalties stemming from its investigation into the Huskers' improper usage of a special teams analyst in 2020.

Just a sophomore, Carter Nelson has quickly become one of the state's top athletes — "He's a pretty rare breed," his coach and teacher said.

This Day in History: First Winter Olympics take place in the French Alps

This Day in History: First Winter Olympics take place in the French Alps

TCU defensive end Ochaun Mathis (32) waits for the next snap during a game against Oklahoma State on Nov. 13, 2021, in Stillwater, Okla.

Ochaun Mathis runs on the field during the first half of a Nov. 26, 2021, game against Iowa State in Ames, Iowa. After two seasons at TCU, Mathis committed to Nebraska on Saturday.

Ochaun Mathis stands on the field before the Red-White Spring Game April 9 at Memorial Stadium. Mathis committed to the Huskers on Saturday.