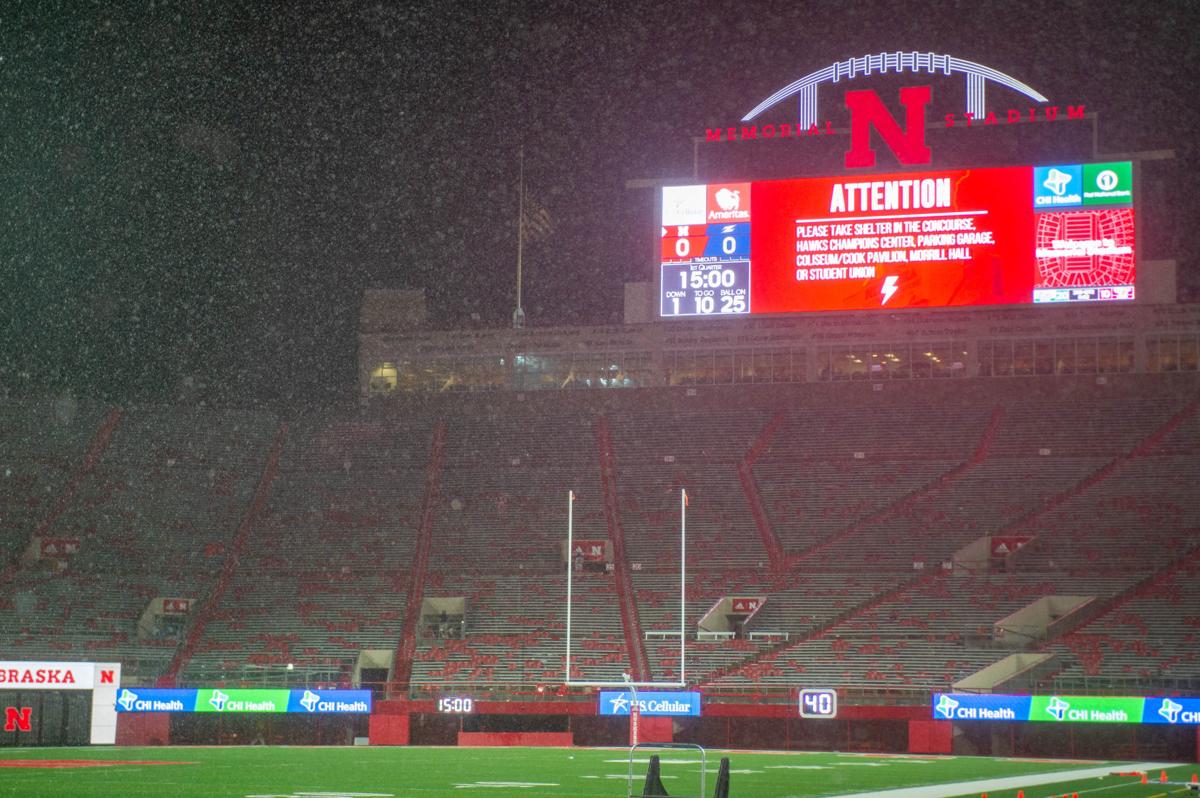 Memorial Stadium is nearly empty during a weather delay Saturday, Sept. 1, 2018. The Huskers' game against Akron was delayed three hours before a decision was made to cancel it. 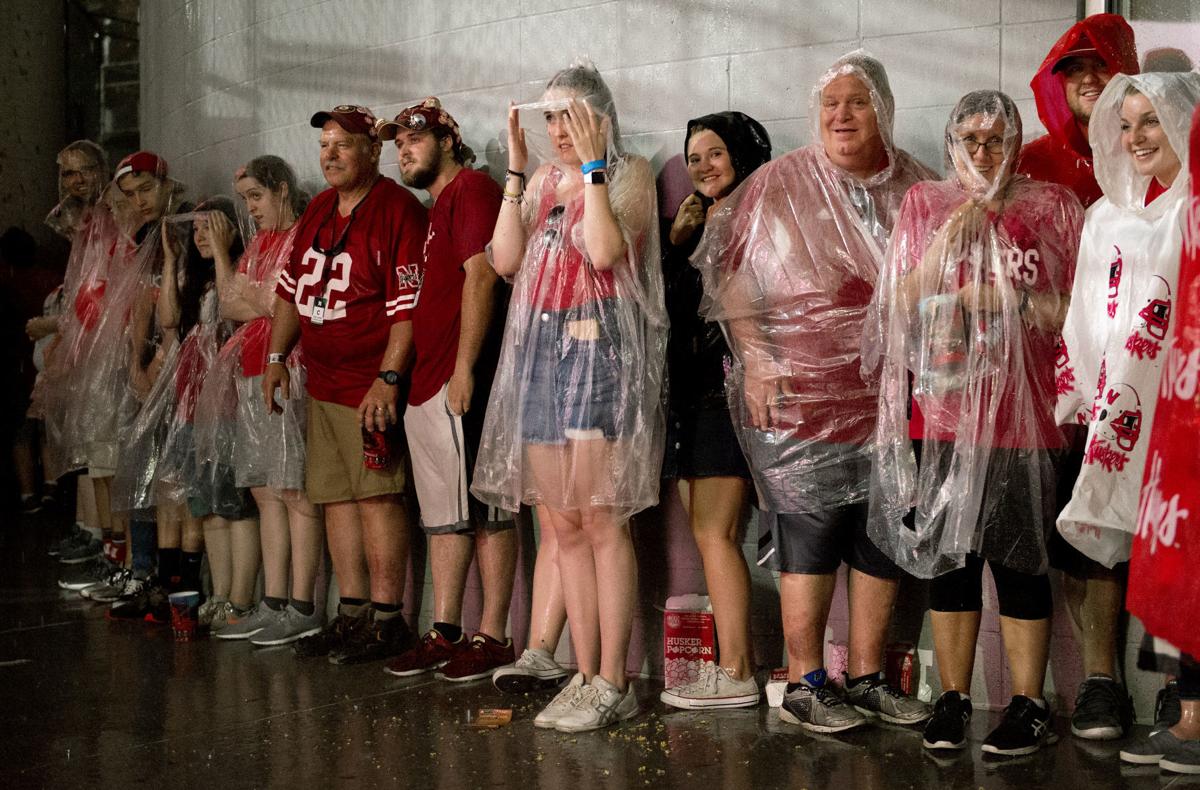 Storms on Sept. 1 led to the cancellation of Nebraska's football game against Akron, and the rain just kept coming. Daily records were set on Sept. 2 and 4. 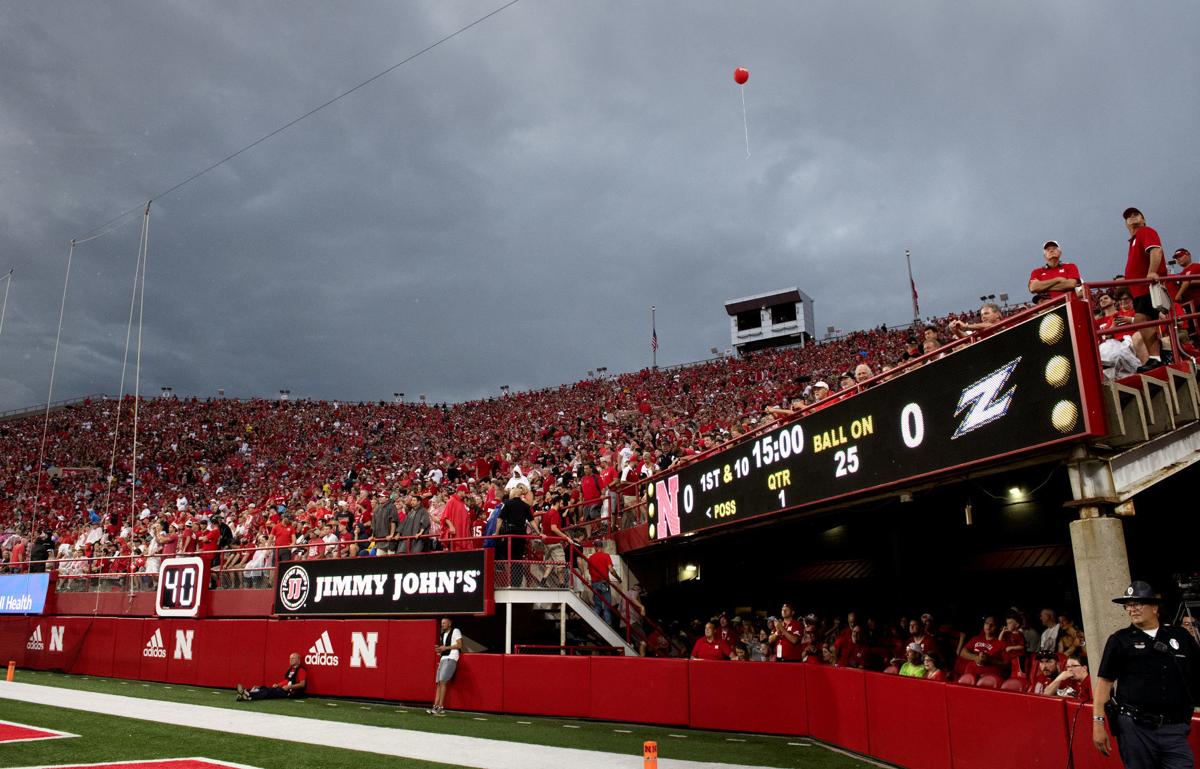 Dark, foreboding clouds appear in the south after the teams returned to the locker rooms moments after kickoff between Nebraska and Akron at Memorial Stadium on Saturday.

The Huskers' season opener against Akron was canceled thanks to severe weather after a nearly three-hour delay.

The potential for a make-up game is not immediately known, though university officials said no definite plans exist and there is not a clear date that works for both teams before December.

The Huskers will play their first full game of the season next Saturday against Colorado.

Neither NU athletic director Bill Moos nor head coach Scott Frost were made available to reporters Saturday evening after the game was called, and the soonest availability with Frost is Monday afternoon.

It was not immediately known if the fact that the game began — Akron kicked off before play was halted because of lightning — and was suspended rather than outright canceled has any impact on whether Akron is compensated for making the trip. The game contract with the Mid-American Conference school called for a $1.17 million payment.

The official suspension announcement came at 9:55 p.m. — 2 hours, 41 minutes after kickoff and 2:40 after the delay began — and NU officials announced at 10:30 p.m. that the game would not be completed.

All through Saturday afternoon, anticipation grew. Temperatures reaching the 90s and high humidity could hardly stifle the buzz about town in the run-up to Scott Frost's debut as the Husker head coach. But the potential for rain and thunderstorms began showing up in forecasts days before kickoff and became increasingly likely to interrupt play as Saturday's forecast came into focus.

The evening of celebration and excitement had just begun when weather scuttled the night.

Lightning arrived at a dramatic moment.

The first bolt visible from West Stadium dropped south of downtown moments after 7 p.m., just as a revamped Tunnel Walk began. The proceedings pressed on, the Huskers won the coin toss and elected to receive the ball, an offensive-minded head coach wanting to put his young signal-caller on the field as soon as possible.

Akron junior Jerry Fitschen sent the kickoff through the north end zone in front of an electric crowd that filled the hallowed stadium.

Martinez and the offense even made it onto the field. But before the referees could signal the Husker freshman that they were ready for play to begin, NU associate athletic director of events Butch Hug ran onto the field from the south end, waving his hands.

Officials briefly conferred and sent both teams to the locker room.

It is the first Nebraska game canceled because of weather in program history and the first home game to be impacted by weather in any manner since Sept. 7, 1991, against Utah State.

Thousands of fans stayed, waiting out thunderstorms and periods of rain, but were asked to leave the stands and head for cover at 9:08 p.m. because of a severe thunderstorm warning issued by the National Weather Service that called for potential 70 mph winds, large hail and heavy rain.

The game was postponed 47 minutes later, though fans remaining in the stadium's concourses were advised to continue to shelter in place as severe weather continued to batter the area.

A weather delay ain’t got nothing on keeping the Huskers fueled! #GBR #FuelNHuskers 🎈 pic.twitter.com/hXn1A9JLew

Once the lightning started, the teams' options were limited significantly. Their bye weeks do not line up — Akron's is Sept. 29, NU's is Oct. 27 — and seemingly the only other option would be to play in December, either on conference championship weekend or between that date and the beginning of bowl games.

The Zips stayed in the Omaha area Friday night and had a charter flight home scheduled for sometime after 2 a.m. Sunday out of the Omaha airport.

The Zips experienced a similar situation last fall, when flooding forced a game at Western Michigan to move to Sunday morning. NU's coaching staff also had weather-related problems during their time at Central Florida, including a September 2017 game switched because of Hurricane Irma.

The Knights went three weeks between games, as a Sept. 6 game against Memphis was moved to Sept. 30 and a Sept. 13 game against Georgia Tech was canceled and not made up. They then played and won 11 straight weeks in order to win the American Athletic Conference championship game.

Time lapse video looking over #MemorialStadium showing the lightning that is causing the delay between the #Huskers and the #Zips.
7:50pm to 8:00pm#LincolnNebraska #Nebraska #GBR #GoBigRed #Skers #Akron @1011_News @JournalStarNews @KETV pic.twitter.com/PTuOdkjk2K

Guy will have a few eyes on him tonight. #Huskers pic.twitter.com/bnHvyeWCsP

The National Weather Service announced a severe thunderstorm and flash flood watch for Lancaster County, including Lincoln, and is predicting …

Hurricane Florence is forcing a slew of football cancellations on the East Coast this week. Who might be a potential Oct. 27 partner for Nebraska?

Happy gameday! The Scott Frost era begins Saturday when the Huskers open the 2018 season against former Big Eight — or 12, depending on your s…

No more mornings, please; tailgating is best in prime time

Photos: From Wood River to Memorial Stadium to Orlando and back again, Scott Frost's Husker career

Scott Frost is home to coach his alma mater and home state Huskers. Click through for photos of his playing days at Nebraska and his subsequen…

Steven M. Sipple: If Husker QB seeks calming presence, trenches may be the place to look

If a player's not careful, the excitement of Nebraska's opener could feel overwhelming. Husker senior offensive guard Tanner Farmer thinks he and some rather large friends can help ease tension.

As the Saturday night spectacle swirls, most expect Frost to be the calmest in the building

Game On: A closer look at how the Huskers and Zips match up

Time to level up. Parker Gabriel takes a look at Saturday's matchup.

Rain and storms may have dampened the mood Saturday night, but it didn't keep away Husker prospects.

Tales of the Tailgate: Toasts to a new attitude this year

Shot Kleen got a handshake from Bill Moos and wiped his brow in mock relief.

Steven M. Sipple: A night to remember on Stadium Drive, in its own unique and wet way

Everyone knew weather could put a damper on the big party Saturday night at Memorial Stadium. Nebraskans know their weather as well as they know their football. They were on-target in this case.

Akron 'opted out' of Sunday restart vs. Huskers; teams could play in December if needed

It would have been fun to have been a fly on the wall during Nebraska athletic director Bill Moos' discussions late Saturday night with Akron A.D. Larry Williams. How hard did Moos push for a Sunday game?

3.64 inches over the weekend, and Lincoln area is in for more rain

Think soggy, mushy and squishy for your work and school week.

Scott Frost is open to the idea of Nebraska making up a game either on its bye week Oct. 27 or after the regular season. He said the team is disappointed in Saturday's cancellation, but he's confident the Huskers will be well-prepared for Saturday's game against Colorado.

"Everybody was pumped and excited, and then to have that happen is pretty frustrating," says Luke Gifford, a senior outside linebacker. "But I'm pretty proud of the guys and how everyone handled it. And then man, we had a great day of work today (Monday)."

Frost on freshman QB Martinez's pre-cancellation poise: 'You can tell when a kid is ready'

Scott Frost said Adrian Martinez on Monday, "had his best practice I’ve ever seen him have."

Nebraska might have had a bizarre weekend, but if Monday is any indication, Scott Frost thinks the team is bouncing back well.

Tornadoes, floods may be on tap once spring arrives in Lincoln

It may be hard to believe based on current conditions, but March 1 marks the start of what weather forecasters call "meteorological" spring.

Memorial Stadium is nearly empty during a weather delay Saturday, Sept. 1, 2018. The Huskers' game against Akron was delayed three hours before a decision was made to cancel it.

Storms on Sept. 1 led to the cancellation of Nebraska's football game against Akron, and the rain just kept coming. Daily records were set on Sept. 2 and 4.

Dark, foreboding clouds appear in the south after the teams returned to the locker rooms moments after kickoff between Nebraska and Akron at Memorial Stadium on Saturday.