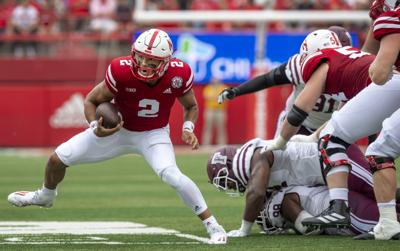 JoJo Domann, who had an interception, discusses Nebraska's 52-7 win against Fordham on Saturday at Memorial Stadium.

Maybe you were among the Nebraska football fans relaxing Saturday at Memorial Stadium.

There's a bit more room to stretch out these days, am I right?

On the field, there was some fire. Perhaps you missed it, but Husker junior quarterback Adrian Martinez and the offensive line exchanged some words early in the game.

"We love each other, right?" he added. "We called each other out."

Step it up. Bring more juice. That was the nature of the conversation.

"It goes both ways, is all I was trying to say," Martinez said.

Watch now: Adrian Martinez says offense 'got in each other's grills a bit' after slow start

Point taken. By both sides, apparently. Nebraska's offensive line started slow, but eventually found ample steam, as the Huskers rushed 65 times for 329 yards (5.1 yards per carry) and six touchdowns. You can question the opponent's level of play, but it's hard to question NU's commitment to the run in this game.

Speaking of hot topics, Martinez also struggled last week against Illinois, especially with his throwing accuracy (16-for-32). He comes under heavy fire on social media. Sometimes he makes himself a somewhat easy target. But, hey, some of the criticism gets ridiculous.

Some of my criticism gets ridiculous. I caught myself nitpicking Martinez in the second quarter before noticing he was 6-for-7 for 133 yards during the period.

He finished the game a cool 17-for-23 for 254 yards and one touchdown, with zero interceptions for the second straight game. He also rushed eight times for 33 yards and two touchdowns. He fumbled once, but his team recovered.

Granted, it wasn't a lot of progress, but Nebraska as a program will take what it can get right now.

Nebraska (1-1) even played OK for the most part on special teams, save for Cam Taylor-Britt's muffed punt and some more short kickoff returns. Taylor-Britt tried unsuccessfully to catch the ball off the bounce. The gaffe comes on the heels of his colossal special-teams error last week.

The coaching staff benched him this time. Rest assured, he'll recover quickly. He's a captain. He's one of the team's best all-around players, if not the best. His teammates need him, and he'll be there for them.

You certainly can say that about Martinez. I'll even say it for you, if necessary, even as I nitpick his game.

He was making it easy to nitpick him during the first quarter as he air-mailed a routine swing pass and then misfired to an open Wyatt Liewer on a deep route.

Perhaps that's when an offensive lineman or two got in his grill. That's healthy. Nothing wrong with a little straight talk in those moments.

A blocked field goal by Nebraska senior safety Marquel Dismuke led to a Husker touchdown drive to push the lead to 17-7.

Then, an interception by Nebraska senior safety Deontai Williams led to another touchdown drive to push the lead to 24-7 with 29 seconds left in the first half.

Ah, suddenly there was some breathing room, and momentum. In the second half, I could've sworn I saw Nebraska's offensive line breathing fire.

"I would say as a unit, we performed a lot better," Martinez said. "For me, personally, I was a little bit calmer. I was making sure I was staying level-headed with my footwork, my decision-making and having trust in our guys."

"First game out of the way," he said. "I just felt comfortable with our guys and what we're doing. We have to trust — trust our teammates."

He certainly can trust those veteran safeties, Dismuke and Williams. They're grown men. They're both fathers. They both take life seriously. It shows in the way they comport themselves. It definitely showed on this day.

"Big momentum boosters," Martinez said of their monster plays in the second quarter. "Those guys are playing really hard. Fordham had gotten a couple big plays, but the defense held up. I think that goes a long way in our continued building of what we're trying to do here and trust on both sides of the ball."

This was a day when normalcy felt good for the home team. Let's face it, this program didn't need the drama that a close win would've created.

A loss to Fordham? Don't even go there.

It was a game that ended with Frost walking to the locker room hand-in-hand with his wife while holding his son.

Bottom line, Nebraska did what it was supposed to do.

So did its veteran quarterback, my nitpicking notwithstanding.

JoJo Domann, who had an interception, discusses Nebraska's 52-7 win against Fordham on Saturday at Memorial Stadium.

Transfer Samori Toure recorded 133 yards and was Adrian Martinez's go-to target during a 52-7 win for the Huskers over Fordham.

Markese Stepp helped the Huskers establish a strong running game in the home opener. He also said he's "never" seen a fan base like Nebraska.

After 'spitting and sputtering' early, Huskers score on seven straight drives to roll past Fordham, 52-7

After a slow start, the Huskers get a spark from an unpredictable place and roll to a home-opening win against Fordham at Memorial Stadium.

The Scene: 'Red Carpet Experience' a success as many Husker fans take in first game at Memorial Stadium

Trev Alberts says the initiative was "awesome" and "bigger than anticipated" as NU donors give many fans a memorable experience Saturday.

Tracking the key stats: Huskers put an emphasis on running the ball; NU cashes in on first downs

Fordham isn't Illinois, but the Huskers executed much better on offense and the defense forced three turnovers. Here's a look at some key areas from Saturday.

Steven M. Sipple weighs in with his report card from the Huskers' game against Fordham.

Still not perfect, but Nebraska takes a step forward in establishing running backs in ground game

Looking for their running game to get some traction, the Huskers got what they needed — and may have found a new leading man in the process.

Nebraska won the battles entering and coming out of halftime, and the war went the Huskers' way in a convincing victory over Fordham.

Several minutes into his postgame conference, Scott Frost (finally) cracked a smile. It was in response to fans returning to Memorial Stadium.

A look at some talking points after the Huskers' game against Fordham on Saturday, including a trip inside the Rams locker room and Twitter.

‘It’s all about hyping up Nebraska': How gobigreddie gained over 100,000 TikTok followers from his pro-Nebraska content

With 116,000 TikTok followers, gobigreddie posts about life in Nebraska, including sports. “It’s super-crazy, because I’m just a kid from Bellevue."

Rewind: Key for Huskers now is what they do with a little dopamine and a lot of good teaching tape

Nebraska got a win. Now what? Plus, notes on the Huskers' QB run game, the option, young guys getting run against Fordham and more.

Turner Corcoran raised his hand about a mistake he made against Fordham before he (and the unit) settled in: "I’m my own worst critic."