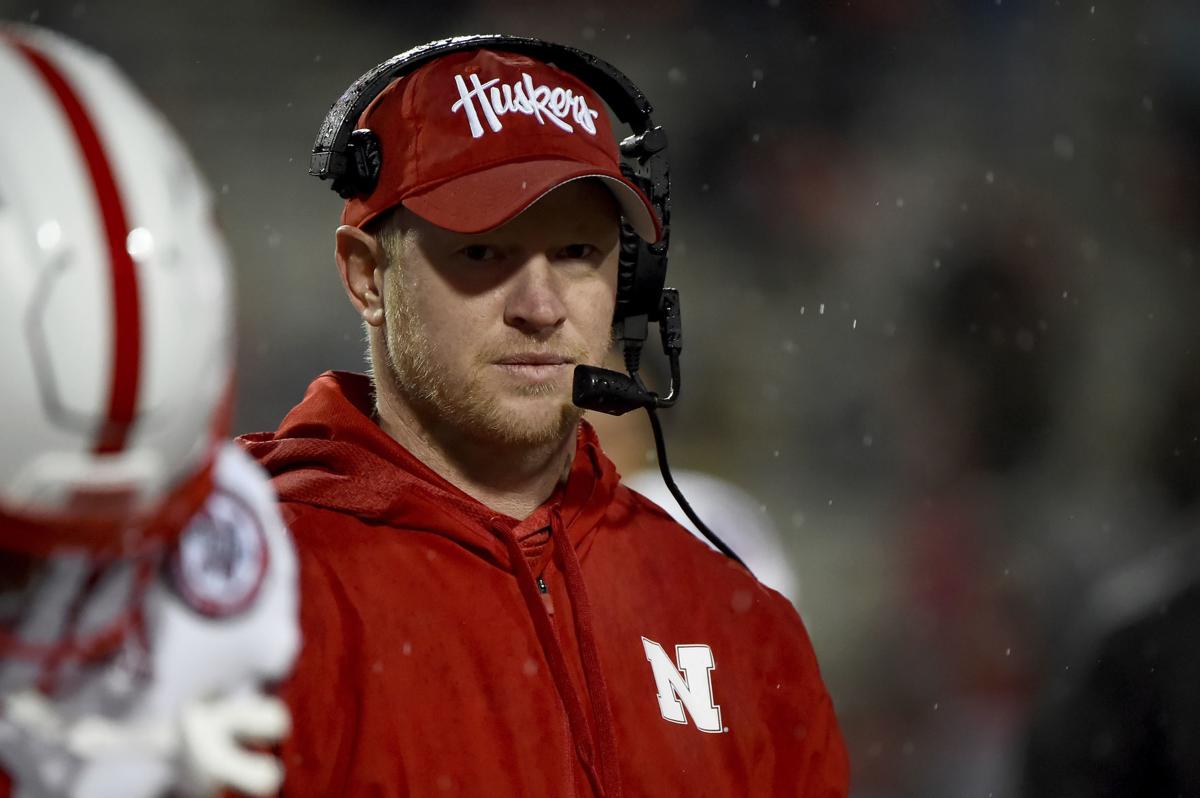 Nebraska head coach Scott Frost looks on during the second half against Maryland on Nov. 23. 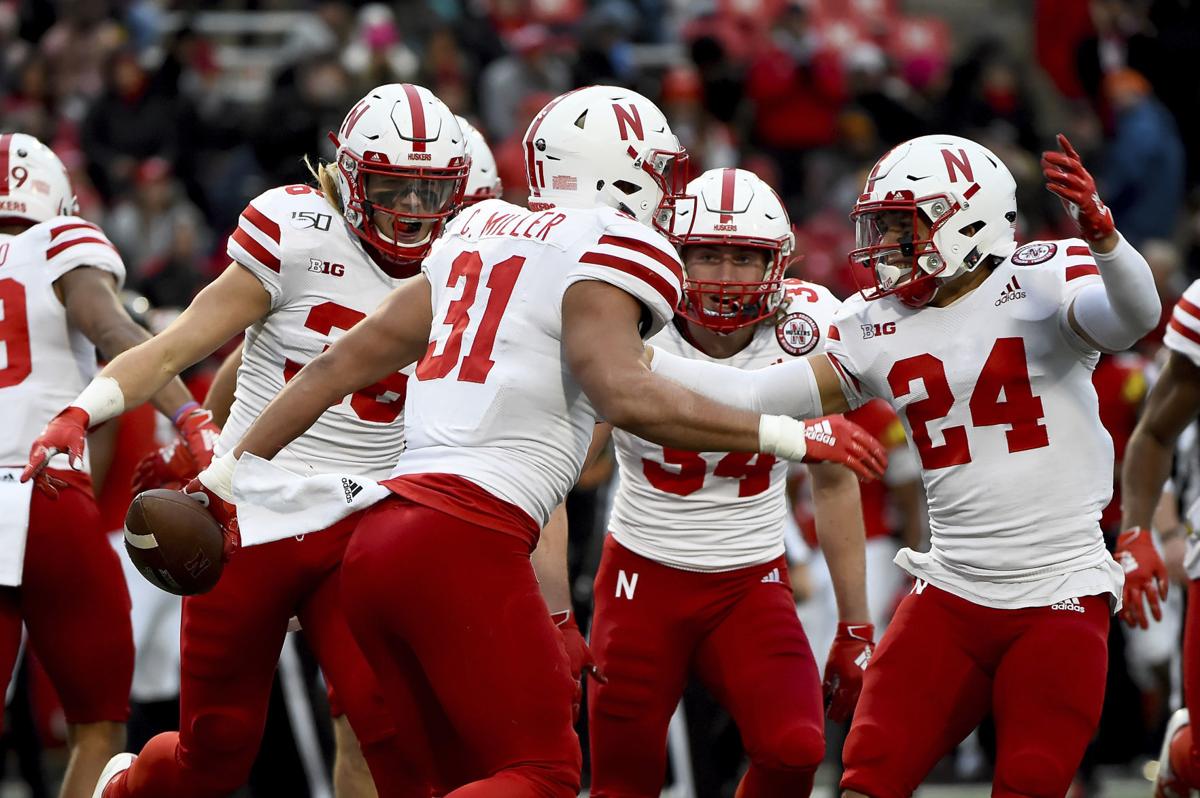 Nebraska linebacker Collin Miller (31) celebrates with teammates after recovering a fumble from Maryland running back Javon Leake (20) during a kick return in the first half Saturday in College Park, Maryland.

"One of them was to get on everyone's hat — you know, share energy," Husker quarterback Adrian Martinez said.

If someone makes a nice play, tap him on the helmet and be excited for each other, Frost told his guys. So, there was a whole lot of tapping going on during Nebraska's 54-7 dismantling of Maryland before 34,082 fans at Maryland Stadium, thousands of whom chanted "Go Big Red" as Husker players streamed toward the locker room following the final gun.

It was quite a scene, really. A light rain fell during a 30-something-degree early evening. The hearty Nebraska faithful were thrilled. About 250 of them were Memorial Stadium suite holders who made the trip with Husker officials. Those folks probably didn't know what to expect in this game. I doubt they expected dear ol' NU to prevail in blowout fashion. I don't think anybody expected it, which is why I'm not going to diminish it.

Your Report Card: Nebraska at Maryland

After all, Nebraska's bowl hopes are alive. And now here comes Iowa for a Black Friday showdown in Lincoln. Yeah, I'm going with "showdown" because the home-standing Huskers (5-6, 3-5 Big Ten) should have plenty of motivation. My heavens, Frost's young program needs a bowl game badly.

Oh, yes, we should at this point mention Frost's other request of his players this week: Don't be a wuss.

Nebraska showed virtually zero wuss qualities as it snapped what was in many ways a dreadful four-game losing skid. The 34-7 loss to Minnesota was dreadful because Frost's team essentially failed to show up. Then the Huskers led early against Indiana, Purdue and Wisconsin, but lacked killer instinct. They failed to step on the proverbial throat. Yeah, it's crude talk. But we're talking about an unforgiving sport, especially this time of year.

Nebraska pitched a shutout in the first half. And get this: Those explosive plays by Maryland running backs that were a concern throughout the week? The Terrapins managed only one home run, and that was Javon Leake's 58-yard dash with 3:13 remaining and NU leading 54-0.

Granted, Maryland (3-8, 1-7) is a weak program. Sort of pathetic, really. But Nebraska's program isn't exactly hitting on all cylinders. Frost talks openly about chemistry concerns. What's more, the Huskers won't have a single player named first-team All-Big Ten. But it's only Frost's second year. He's essentially trying to revive a program that for the last 15-plus years generally has been defined by instability brought on largely by horrific decisions by upper-level administrators.

So, Nebraska fans these days look hard for progress. Any progress. Never mind the opponent in this case. You saw Nebraska players show fight and determination. The Huskers played in a manner that suggests they want the season to continue. That alone felt like progress. I mean, remember the 2017 season, the last under Mike Riley? Multiple NU players have said themselves that that team essentially quit.

You don't see that in this team. In fact, Nebraska in this game put together what qualifies as a complete performance. That's been a rarity in recent years.

"I was really happy with the team just having the enthusiasm they had and playing for each other and playing together," Frost said.

If you're handing out game balls, give one to Nebraska junior receiver JD Spielman. He caught seven passes for 104 yards and two touchdowns despite being hooked up to an IV in the team hotel earlier in the day because he's been battling food poisoning followed by a flu bug. He missed Wednesday's practice. Dedrick Mills, also battling a flu bug, missed practice time Monday, Tuesday and Wednesday but still rushed 12 times for 65 yards and a touchdown.

Nebraska scored on nine of 10 trips into the red zone.

Yeah, it finished drives. It finished off Maryland with ease.

Now, let's see if Frost's crew can put an end to an unsightly four-game skid against Iowa and end a godawful two-year bowl drought.

Say what you want about beating the Terrapins, the Huskers picked up some needed momentum.

Also, understand this: Sometimes a win's biggest significance is in what it allows a team to avoid. In this case, Nebraska fans, consider the nature of your Thanksgiving dinner conversations had the Huskers managed to drop this game, and look lethargic in doing so.

"When you get on a roll and get some momentum and you get winning, it seems like it just keeps going in that direction," Frost said. "I think our guys need a few of these (type of wins) to have the confidence that these kind of things can happen."

Watch: Frost says team 'overdue' to get breaks; pleased with energy, enthusiasm in rout of Terrapins

Bottom line, Frost asked his team to avoid being wusses. He also asked them to play with energy and share that energy with each other. Bingo, on both counts.

The Huskers came to Maryland — the school and the state — for the first time in program history and laid waste to a Terrapins team that came in, on paper, in similar position to NU but showed none of the kind of want-to that Scott Frost’s team put on display 1,200 miles from home in a 54-7 rout.

COLLEGE PARK, Md. — JD Spielman’s Saturday in Prince George’s County got off to an inauspicious start.

With 'our days are numbered' as motivation, Blackshirts put together their best performance of the season

Sound waves: What others are saying about Saturday's game

COLLEGE PARK, Md. — Matt Waldoch was working a shift at Leadbelly in the Haymarket when his phone buzzed back in August.

COLLEGE PARK, Md. — Mohamed Barry’s Nebraska career has not gone exactly as he would have dreamed it up when he first arrived on campus as a f…

Red Report: Noa out for remainder of season; no running for Rahmir; the return of Waldoch; Gaylord seeking sixth year

Nebraska coach Scott Frost announced Husker wide receiver Kanawai Noa is out for the remainder of the season (torn meniscus), plus gave insight on the NU-Iowa rivalry ahead of the all-important Black Friday battle.

Steve Sipple and Parker Gabriel share the latest, including player updates and information about the upcoming Iowa game on Nov. 25, 2019.

Nebraska head coach Scott Frost looks on during the second half against Maryland on Nov. 23.

Nebraska linebacker Collin Miller (31) celebrates with teammates after recovering a fumble from Maryland running back Javon Leake (20) during a kick return in the first half Saturday in College Park, Maryland.