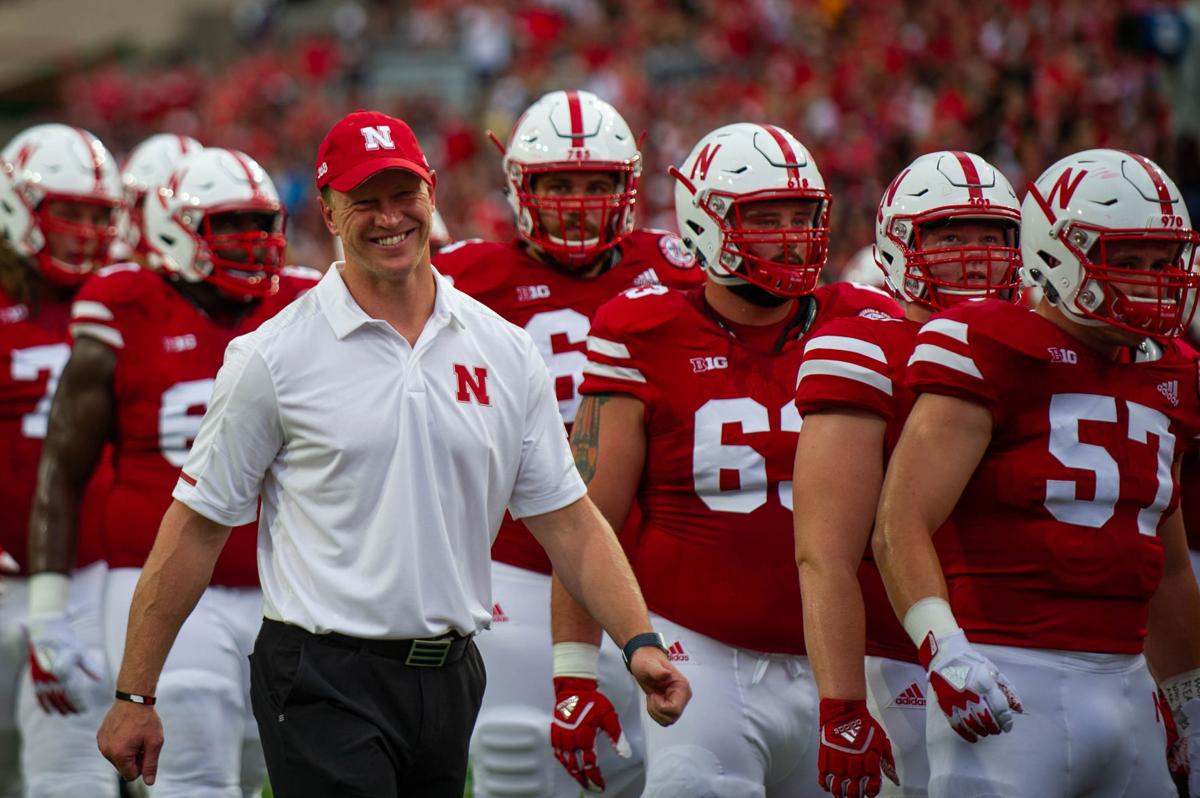 Coach Scott Frost smiles as he walks off the field as weather moved in after opening kickoff against Akron. 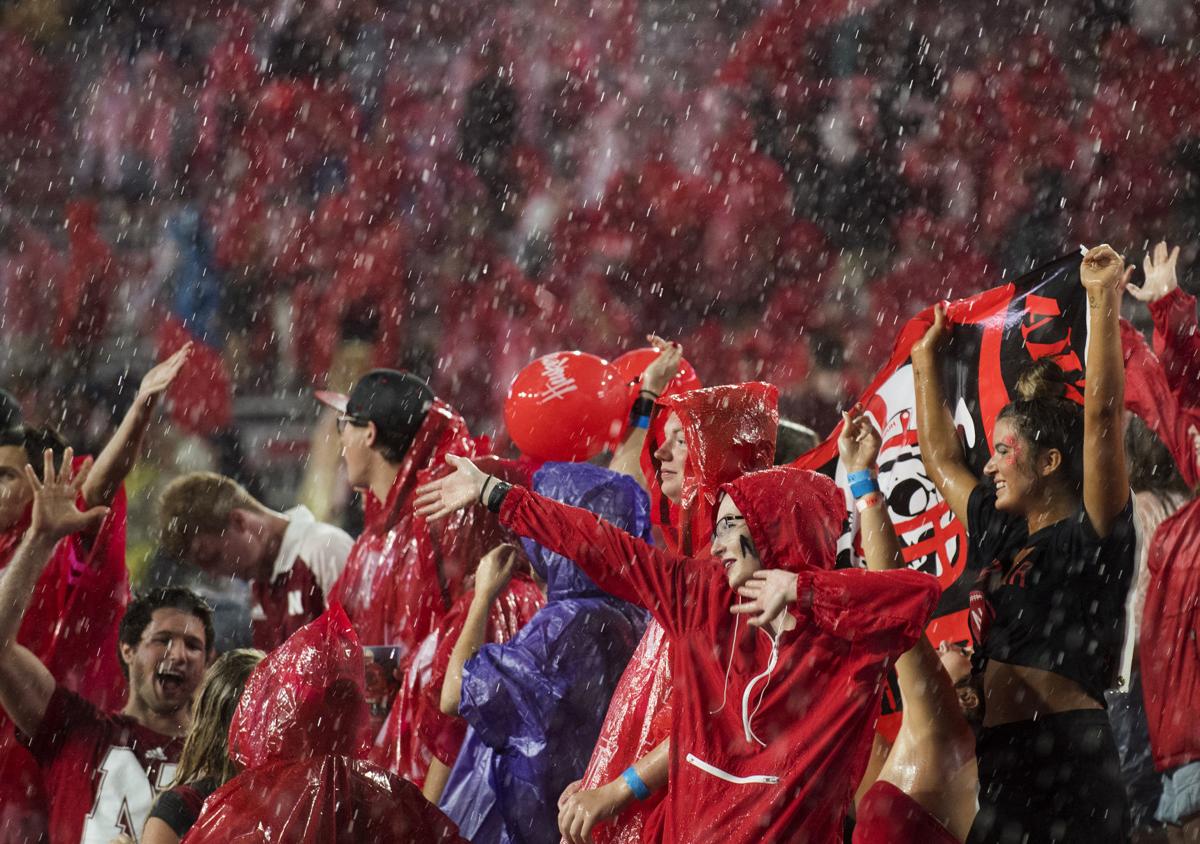 Students seem to enjoy the downpour during a weather delay at Memorial Stadium on Saturday.

So, they called it a night.

Called off the show.

Even so, it was a night to remember, in its own unique and wet way.

This lightning-delay stuff was kind of fun, really — unless, of course, you were Scott Frost.

The rest of us caught up with friends and whomever. With 90,000 people in Memorial Stadium on Saturday night, imagine the ridiculous amount of small talk going on with no game being played. If the conversation waned, you could discuss the weather or perhaps how wonderful Nebraska football feels again with Frost in charge. Or you could watch the student section. The kids sang and danced in the rain. And get this: They weren't staring at their cellphones. It was beautiful Americana.

(Unless, of course, you consider that the students, and thousands of other fans, sat out much of the delay on metal benches as lightning danced crazily around Lincoln, but I'm not judging anyone.)

Meanwhile, Frost had a team to think about. The night was a party, but not for Frost and his staff. Yeah, this was a dawn of a new era for the program and all that jazz. But Frost had serious matters to consider. The first-year Nebraska coach had yet another challenge on his hands. They don't have handbooks for how a coach should handle a lightning delay — and ultimately, a canceled game — just like they don't have handbooks for how to handle it when your No. 2 quarterback leaves town five days before the scheduled season opener.

On Monday, just when Nebraska went hard into preparation for the scheduled season opener against Akron, Frost dealt with quarterback Tristan Gebbia's departure. The Huskers had enjoyed a relatively quiet preseason camp — a strangely tranquil August by preseason camp standards anywhere — right up until last week. We should've known life would balance itself out. Frost suddenly had some headaches. That's life in the big chair.

He surely knew Saturday morning he could have a headache on his hands for his first game as Nebraska's coach. Amateur weather forecasters were having a heyday. Folks knew bad weather was a distinct possibility. Everyone knew it could put a damper on the party. Nebraskans know their weather as well as they know their football. They were on-target in this case.

Right after Akron's game-opening kickoff sailed untouched into the north end zone for a touchback, Nebraska associate athletic director Butch Hug walked briskly onto the field and waved players and coaches off it. The delay officially began at 7:15 as lightning moved within an 8-mile radius of the stadium. This was indeed a unique situation. The last in-game weather delay of a Nebraska football game was Oct. 13, 2001, at Baylor. That one resumed and the Huskers prevailed 48-7.

This situation was particularly unique because of the incredible fan anticipation accompanying the program's revival under Frost. We tried to capture it all week, the mix of history and hopefulness, of healing and happiness. But as the big show was about to begin, ominous clouds were building in strength to the south of the stadium. You knew what was coming. A delay seemed inevitable. You wondered in the back of your mind if a full-on cancellation would occur. Then, at 10:30, final word came: No game this weekend.

Nebraska had never had a game canceled because of weather. Yeah, strange stuff.

Now, Frost will have to get his team revved up to play Colorado next week. The Buffaloes' 45-13 win against Colorado State on Friday night probably got the Huskers' attention.

Nebraska fans will be revved up, again. For obvious reasons. For reasons that presented themselves Saturday night long before the doors closed on the originally scheduled season opener. You could feel the joy downtown and all around the stadium. An old friend even showed up for the party.

Not long after the initial delay announcement, with the teams back in their locker rooms, former Nebraska great Ndamukong Suh strolled across the field to a familiar sound: "Suuuuuuuuuuuuuuuuuuuh!" Now a member of the Los Angeles Rams, Suh hadn't been to a Husker football game in Lincoln since Nov. 2, 2013, the day Jordan Westerkamp hauled in Ron Kellogg III's Hail Mary as the Huskers prevailed 27-24 — much to the chagrin of then-athletic director Shawn Eichorst. Eichorst wanted Pelini gone. Suh had played for Pelini and respected him. You do the math.

At any rate, it was good to see Big Suh again. It was yet another sign of a program healing.

If you're a Nebraska fan, I'm guessing Saturday night was sort of fun until … it wasn't.

Then, it just felt weird. Sort of empty. But fans will get their fill this coming week. Bring on the Buffs.

Time lapse video looking over #MemorialStadium showing the lightning that is causing the delay between the #Huskers and the #Zips.
7:50pm to 8:00pm#LincolnNebraska #Nebraska #GBR #GoBigRed #Skers #Akron @1011_News @JournalStarNews @KETV pic.twitter.com/PTuOdkjk2K

Guy will have a few eyes on him tonight. #Huskers pic.twitter.com/bnHvyeWCsP

Rapid Reaction: Moos says Akron tickets will be reissued if 12th game is played; no refunds

Nebraska athletic director Bill Moos addressed the media in person Wednesday for the first time since Saturday's game against Akron was canceled.

What they're saying about Saturday's NU-Akron game

Never say never, but Nebraska and Akron do not have many promising options when it comes to rescheduling Saturday night's scuttled season opener.

For first time in 128 seasons, Nebraska loses a game to weather

In its 128-year history, the Nebraska football team was undefeated against Mother Nature.

Shot Kleen got a handshake from Bill Moos and wiped his brow in mock relief.

Storms steal Nebraska's thunder as season-opener against Akron is canceled

Akron 'opted out' of Sunday restart vs. Huskers; teams could play in December if needed

It would have been fun to have been a fly on the wall during Nebraska athletic director Bill Moos' discussions late Saturday night with Akron A.D. Larry Williams. How hard did Moos push for a Sunday game?

3.64 inches over the weekend, and Lincoln area is in for more rain

Think soggy, mushy and squishy for your work and school week.

Scott Frost is open to the idea of Nebraska making up a game either on its bye week Oct. 27 or after the regular season. He said the team is disappointed in Saturday's cancellation, but he's confident the Huskers will be well-prepared for Saturday's game against Colorado.

Frost on freshman QB Martinez's pre-cancellation poise: 'You can tell when a kid is ready'

Scott Frost said Adrian Martinez on Monday, "had his best practice I’ve ever seen him have."

Coach Scott Frost smiles as he walks off the field as weather moved in after opening kickoff against Akron.

Students seem to enjoy the downpour during a weather delay at Memorial Stadium on Saturday.