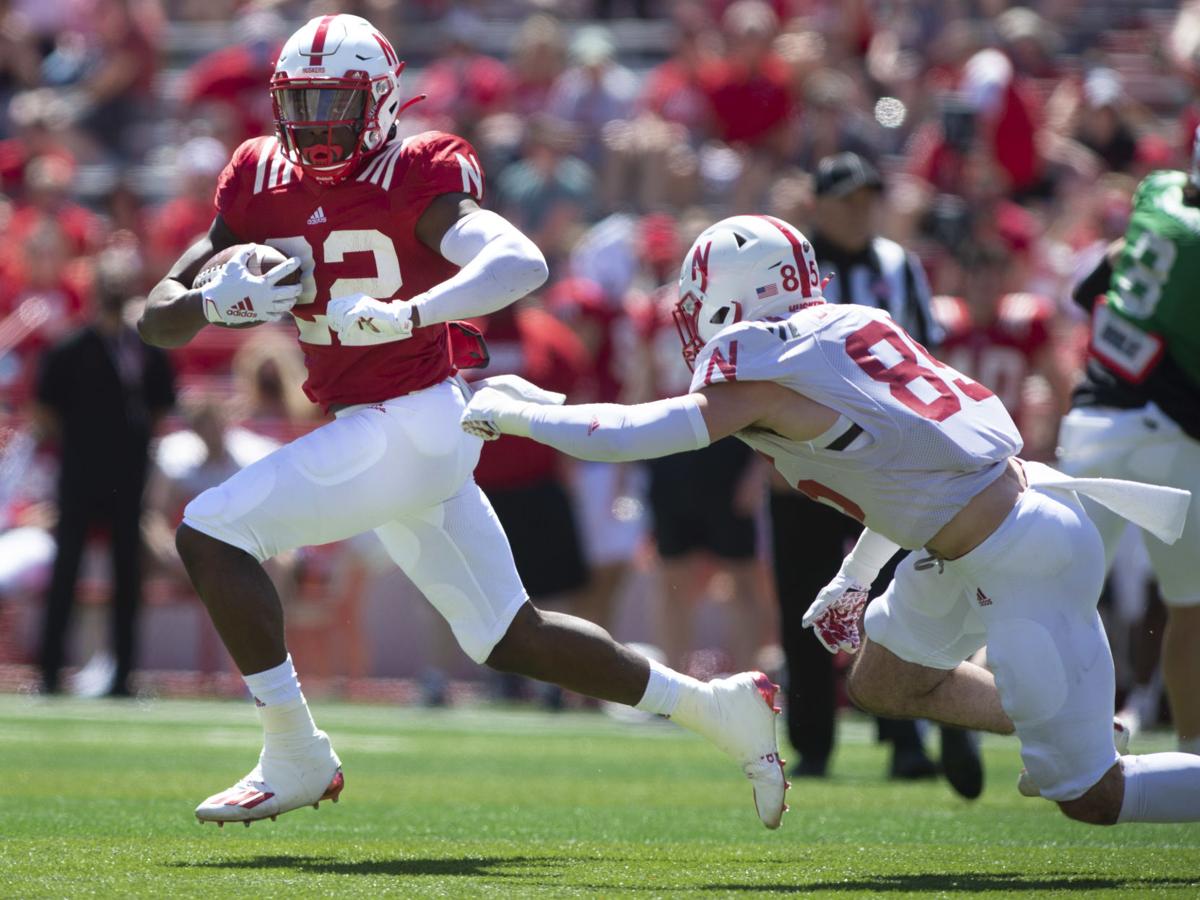 The Red Team's Gabe Ervin narrowly avoids being tackled by the White's John Bullock in the second half of the Red-White Spring Game on Saturday at Memorial Stadium. 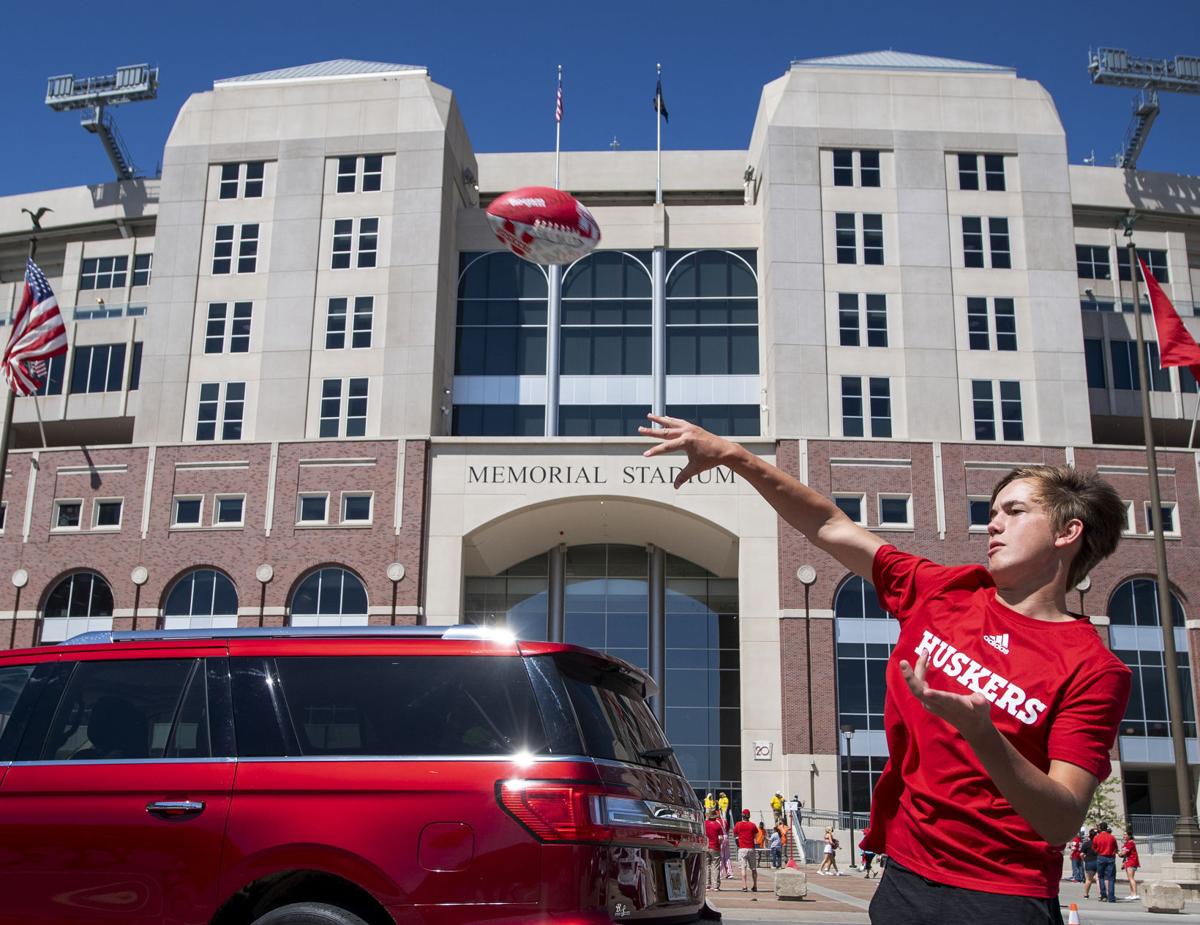 Nebraska coach Scott Frost said earlier this week he wanted one of his young running backs to step up and become the go-to guy.

That doesn’t happen in one game — let alone one half — but the coaching staff gave several young players plenty of opportunity Saturday.

NU ran the ball 54 combined times in the second half of the Red-White Spring Game once tackling went live. The White Team rolled up 220 yards on 30 carries and the Red Team 130 yards on 24.

The Scene: It was football Saturday in Lincoln again, and oh, what a joy it was for fans

“I thought that was a bright spot today,” Frost said afterward. “I’ve got to watch the tape, but seeing those guys run hard. That’s kind of hard to tell sometimes because we’re not live very much, completely tackle to the ground very much in spring ball. Just can’t afford to be and the rules don’t let us be.

“It’s kind of hard to tell with running backs, but watching them in the second half and seeing some tackles broken and guys running through contact, I thought that was a real positive today.”

Frost said NU doesn't have an official diagnosis yet.

Honas suffered a torn ACL midway through the 2018 season and missed the rest of the year. He played well down the stretch last year and opted to return to Lincoln for a fourth year after a two-year stint in junior college ball in Kansas.

"Will's been a just awesome teammate and I care about him so much, so it really hurt me to see him down on the ground on Wednesday," Frost said. "Doesn't look like he's going to be ready for the start of the season and we'll see where it is beyond that."

Manning coming on: Nebraska fans got their most extensive look at wide receivers Samori Toure and Omar Manning.

Toure is a transfer from Montana, while Manning only appeared in one game in 2020.

Toure had three receptions for 47 yards, while Manning had three catches for 24 yards.

Toure feels good about what he and Manning can do.

“Me and Omar have actually gotten pretty close. I love the guy,” Toure said. “He’s just starting to have a handle on everything. He’s getting the playbook down more, and he’s just putting in maximum effort all of the time. You can just tell he wants to be great. I’ve heard things about last year, and I don’t know what happened, but from what I’ve seen Omar wants to be great, and I think he can be.”

Toure likes the thought of him and the 6-foot-4 Manning being on the field at the same time.

“I feel like when we’re on the same side, they got to pick one of us to take away, and you can’t take us both away,” Toure said. “So that’s something that’s going to be really important.”

Gunnerson opens eyes: Freshman outside linebacker Blaise Gunnerson capped his spring in a nice way, finishing with three tackles and a sack of Adrian Martinez early on.

Red-White offensive review: Our biggest takeaways, including seeing the RBs in live action

Red-White defensive review: Our biggest takeaways from a good day for the Blackshirts

The 6-6, 250-pounder has prototypical size at the outside linebacker spot, but spent most of 2020 in NU's rehabilitation group. Gunnerson had surgery on both of his hips in high school.

On the sack, he beat none other than Turner Corcoran on a power move. The pair are roommates and close friends and Gunnerson has said previously that Corcoran is a big reason why he picked NU over Iowa State during his recruitment.

"Last year, right as soon as everything got shut down was the practice that he was able to suit up and go through individual (drills)," Corcoran said. "So he was really bummed out when things did get shut down.

"Seeing him go out there and do the things he did — he got a sack off of me and I was like, 'All right, that can't happen again' — no, but he played incredible and I think the sky is the limit for that guy. He's my roommate, so of course I'm going to talk him up, but he's doing great."

Haarberg's day: Heinrich Haarberg graduated from Kearney Catholic and got an early start on his college football career this spring.

That included extensive action Saturday. The highlight was a 25-yard TD pass to Wyatt Liewer as time expired to give the White Team the 21-20 win. Just before that Haarberg hit Liewer for 40 yards.

Haarberg feels good about the progress he’s made since January.

“When I got here I was swimming in it,” Haarberg said. “I was going up to (quarterback coach Mario Verduzco’s) office for about three hours every day just trying to learn and figure out how to put myself in this offense. And now I came out today confident that no matter what play they called, I was going to be able to run it, and not do anything outside of myself and just run the offense.”

Haarberg finished 9-for-23 passing for 121 yards with one interception.

“Going into the wind it was a little hard,” Haarberg said. “There were two balls that kind of got caught by that wind. But at the end of the day it’s Nebraska, and when it's November and you’re playing Wisconsin you don’t get excuses. You got to be able to deliver no matter what the conditions are.”

Corcoran to 'Bolt Up': Corcoran grew up squarely in Kansas City Chiefs country in Lawrence, Kansas, but he says he'll have to cheer for a division rival now, too.

That's because former NU left tackle Brenden Jaimes, whom Corcoran backed up last year until taking over in the final game, was drafted in the fifth round by the Los Angeles Chargers.

The two exchanged texts on Saturday shortly after Jaimes was selected.

"I told him congratulations, Bolt Up, I'm going to be a fan," Corcoran said. "I know they're in the same division as the Chiefs and it's going to hurt to watch him play the Chiefs, but I'm excited for him."

Scrimmages aren't exactly conducive to observing special teams. Daniel Cerni's 61-yard punt was one play to remember, along with a few others.

After a strong performance Saturday, Ryan Held hopes his Husker RBs head into coming months with a Rocky IV mentality. What's that entail?

We took a stab at a depth chart before spring ball. Now, after hearing from coaches and players for five weeks, we've revised it.

The Red Team's Gabe Ervin narrowly avoids being tackled by the White's John Bullock in the second half of the Red-White Spring Game on Saturday at Memorial Stadium.