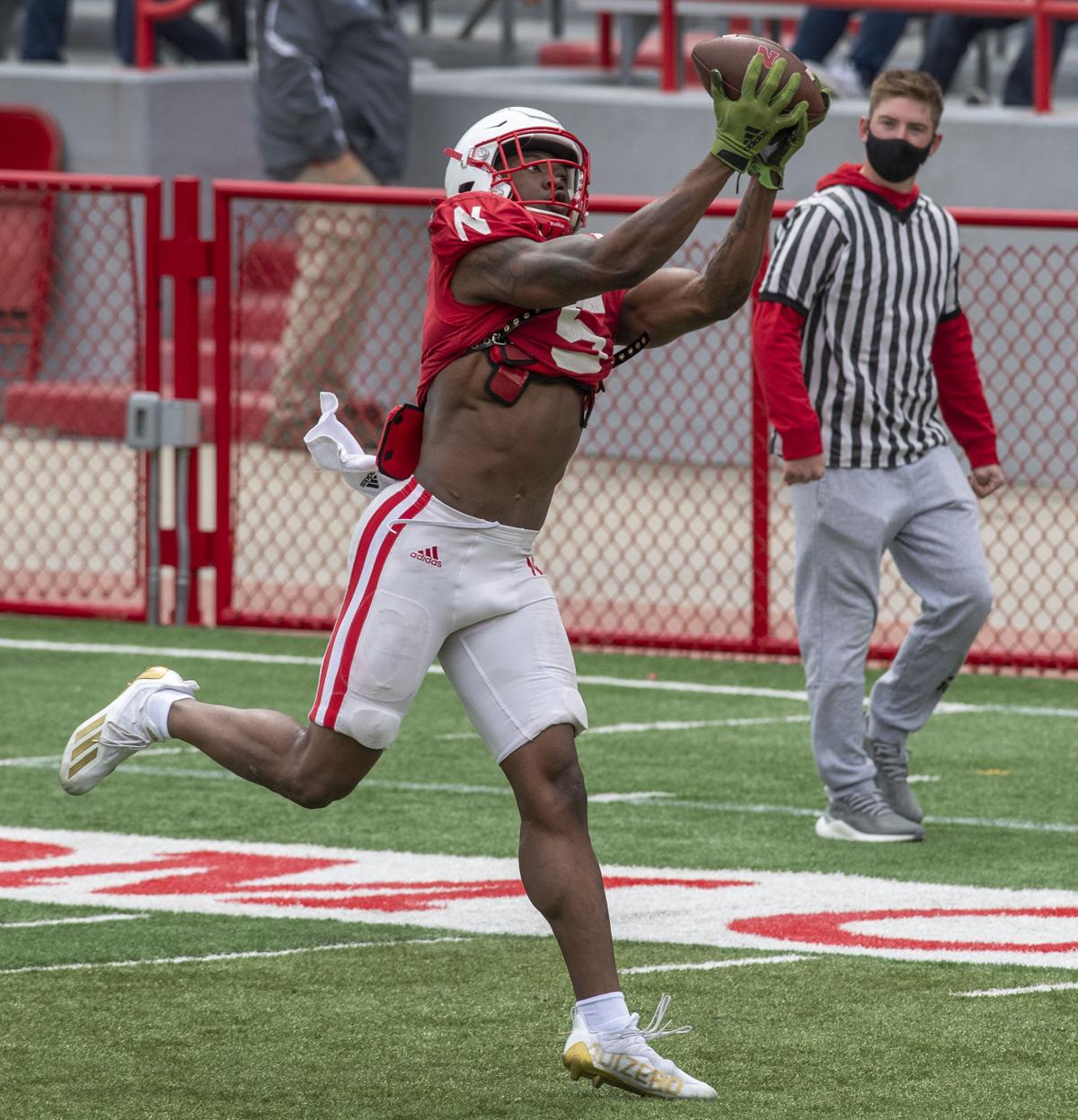 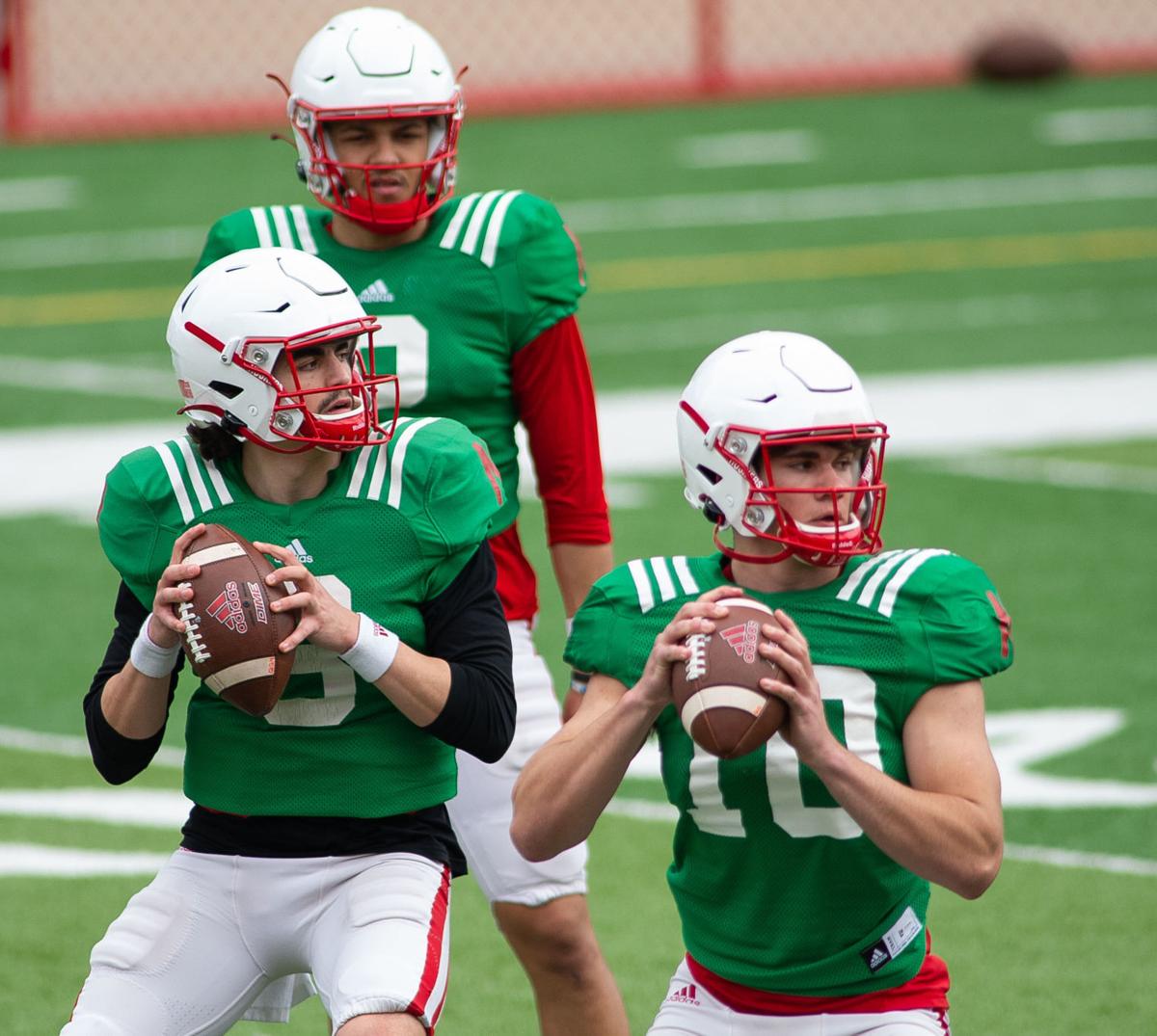 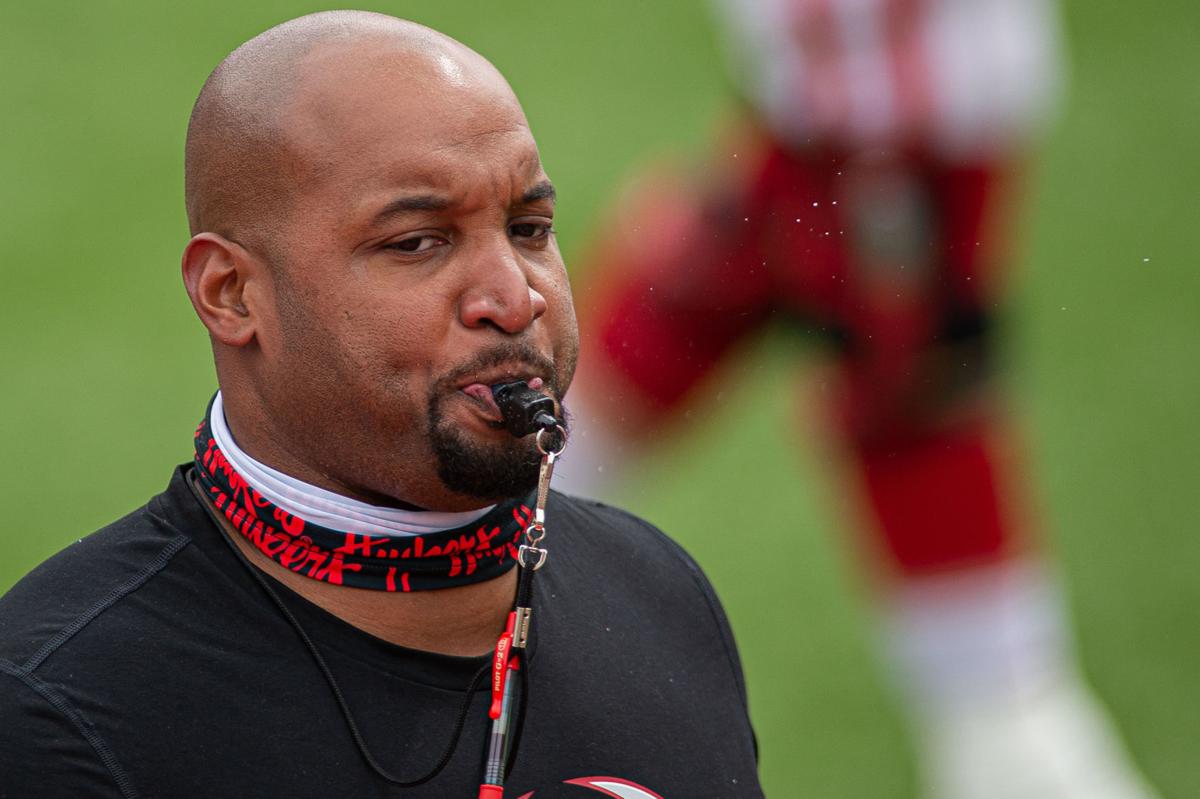 Husker assistant coach Greg Austin blows his whistle while directing players through drills during a practice Saturday at Memorial Stadium.

If you showed up at Memorial Stadium on Saturday afternoon for the first full, open practice of the Scott Frost era at Nebraska looking for reasons to be excited about the 2021 Huskers, here’s a practice snippet that might have done the trick.

A pair of much-discussed wide receivers — graduate transfer Samori Toure and junior Omar Manning — stacked together to the left side of the formation and released into a route combination against a coverage trio of cornerback Quinton Newsome, safety Marquel Dismuke and nickel Isaac Gifford. The pair crossed over and Manning, the 6-foot-4, 225-pound former junior college transfer, arced his route to the middle of the field before cutting back to the corner, creating separation, hauling in an accurate throw and waltzing into the end zone to the delight of about 3,200 onlookers.

It was one of several plays Manning made on the day and one of a handful that tracked along with what coach Scott Frost has said since January: That this should be the most talented, productive pass-catching group he’s had in Lincoln.

Husker Extra Podcast: Breaking down the latest in spring football and the new transfer and recruiting rules

Toure is steady and versatile, according to his teammates, and he looked the part of an impact addition Saturday. Manning and freshman Zavier Betts — who appeared to tweak his ankle early in the session and was mostly quiet — are physically imposing. Junior transfer Oliver Martin, who has drawn rave reviews this spring, might have been the most impressive of the group with his easy acceleration and knack for making plays down the field. He ran by a couple of guys, including cornerbacks Newsome and Braxton Clark, at different points in practice.

Levi Falck and Will Nixon are on opposite ends of the eligibility spectrum but each made their share of plays Saturday.

Alante Brown is out currently and had a large apparatus on his left arm as he watched.

What does all of that mean in the grand scheme of things? If nothing else, it means Nebraska has more options to work through — options that are on campus, getting real work in five months before the season starts — than at any point since 2017.

Here are several other observations from nearly three hours at Memorial Stadium.

An ol' vet on the OL

Just like at an open portion of practice last week, junior Matt Sichterman worked primarily with the No. 1 offensive line at right guard. That spot figures to be a hot competition, and redshirt freshman Brant Banks got extensive work there, too. For the most part, that pair worked the right side while junior Broc Bando filled in behind Ethan Piper at left guard. Ezra Miller looks like the current No. 2 right tackle behind Bryce Benhart.

Maybe the single most impressive play of the day came from redshirt freshman nickel/outside linebacker Javin Wright. He dropped into coverage, contorted his body and hauled in an impressive, twisting one-handed interception in the deep post during a 7-on-7 drill. With JoJo Domann limited by a minor injury, Wright and Gifford got a ton of work with the top groups Saturday.

Other candidates include freshman quarterback Heinrich Haarberg dropping a deep post in the bucket for Falck late in practice, and Manning making a series of contested catches in traffic, including another deep ball from Haarberg. The ball sticks in his hands.

It was very interesting to see outside linebackers coach and special teams coordinator Mike Dawson right in the middle of the field and barking out instructions during special teams periods.

The newly minted coordinator has a deep history working the position, and Nebraska, of course, needs to be much better across the board.

Brown figures to factor in the return game when he’s healthy, but NU’s top two kick returners on Saturday were Cam Taylor-Britt and Martin, while Nixon worked into that spot, too.

Junior Adrian Martinez looked confident and in rhythm for the most part. He began one period by airmailing Martin twice over the middle of the field, but for the most part was accurate. Martinez's leadership in the group is unquestioned. He dapped the young guys up after good throws, gave pointers and generally had the presence of a two-time captain.

There aren't any big, sweeping conclusions to be made about the freshman pair of Haarberg and Logan Smothers at this point. You can easily find things to like about both, beginning with Haarberg's natural arm talent and Smothers' decision-making.

There are also plenty of reasons to wonder about both. Haarberg delivered some beauties and some wild throws, while Smothers sees the ball flutter sometimes when he really tries to rip it. Nebraska doesn't need either of them to play in a game this weekend, obviously, but the brain trust will have to decide if they have enough depth or if they need to pursue another signal-caller well before August. In fact, that call probably comes within the next few weeks.

Don't forget about walk-on Matt Masker. He's steady and had his moments on this day. He closed one period with a good read and throw to Nixon for a big gain in the flats, earning fist-bumps from quarterbacks coach Mario Verduzco and offensive coordinator Matt Lubick.

Nothing new here, but Austin Allen and Travis Vokolek make for an imposing pair of tight ends.

The availability chart shifted a bit from last week, but Nebraska still worked with just two scholarship backs available Saturday. This time, Marvin Scott was joined by Ronald Thompkins. Sevion Morrison got some work off to the side, while freshman Gabe Ervin was in street clothes.

USC transfer Markese Stepp, who is set to miss the spring after having surgery, had a boot on his left foot and made his way around the field with help from a scooter.

Walk-ons Cooper Jewett and Jaquez Yant continue to get a ton of work.

A partial list of other guys who did not participate Saturday in addition to the previously reported list of those out for the entire spring: senior kicker Connor Culp (walk-on Tyler Crawford had the first crack at place-kicking duties in his absence), cornerback Tamon Lynum, tight end Chris Hickman, offensive lineman Branson Yager, defensive lineman Tate Wildeman and wide receiver Brody Belt.

Senior inside linebacker Will Honas worked back in some after a groin injury held him out earlier in spring, but he was limited Saturday.

Benhart, who handled Damion Daniels on the first rep of the day, and redshirt freshman Noa Pola-Gates, who shed a block and delivered a sturdy blow to a ball carrier.

Pola-Gates was part of a No. 2 secondary that often paired him with Myles Farmer at safety and Clark and Nadab Joseph at the corners. That group gave up a few plays, but it's easy to see why secondary coach Travis Fisher likes his group overall. Newsome and Taylor-Britt worked mostly as the top corner pair. It's hard to find an example of somebody getting the better of Taylor-Britt.

How far could the Dallas Cowboys go this year?

When the end of May arrives, it will have been nearly 16 months of high school athletes not being able to formally visit campuses.

A native of Suwanee, Georgia, Quinton Newsome helped himself adjust to Lincoln by being friendly to basically everyone he encounters.

There was plenty for Husker fans to like about Saturday's practice. But fan anxiety should be expected right now.

The Scene: Autographs, high-fives and father-son time at Memorial Stadium for the first time since 2019

More than 3,000 fans gladly snapped up free tickets to watch the Huskers practice two weeks before the Red-White Spring Game.

'A freak of nature': Transfer Kolarevic has fit in well to suddenly veteran Husker ILB room

Since arriving on campus, Kolarevic said he’s blended in well with the group and that he’s excited about the unit’s potential going forward.

Nebraska is allowing fans to buy up to 10 tickets at a time now for the spring game.

After playing 'like a robot' in 2020, Husker OLB Pheldarius Payne feels he's ready for a jump

Nebraska made the decision to move Pheldarius Payne to outside linebacker after his weight loss.

Matt Sichterman is trying to win a starting job and also moving toward graduating with a software engineering degree. The worlds collide this week.

Husker assistant coach Greg Austin blows his whistle while directing players through drills during a practice Saturday at Memorial Stadium. 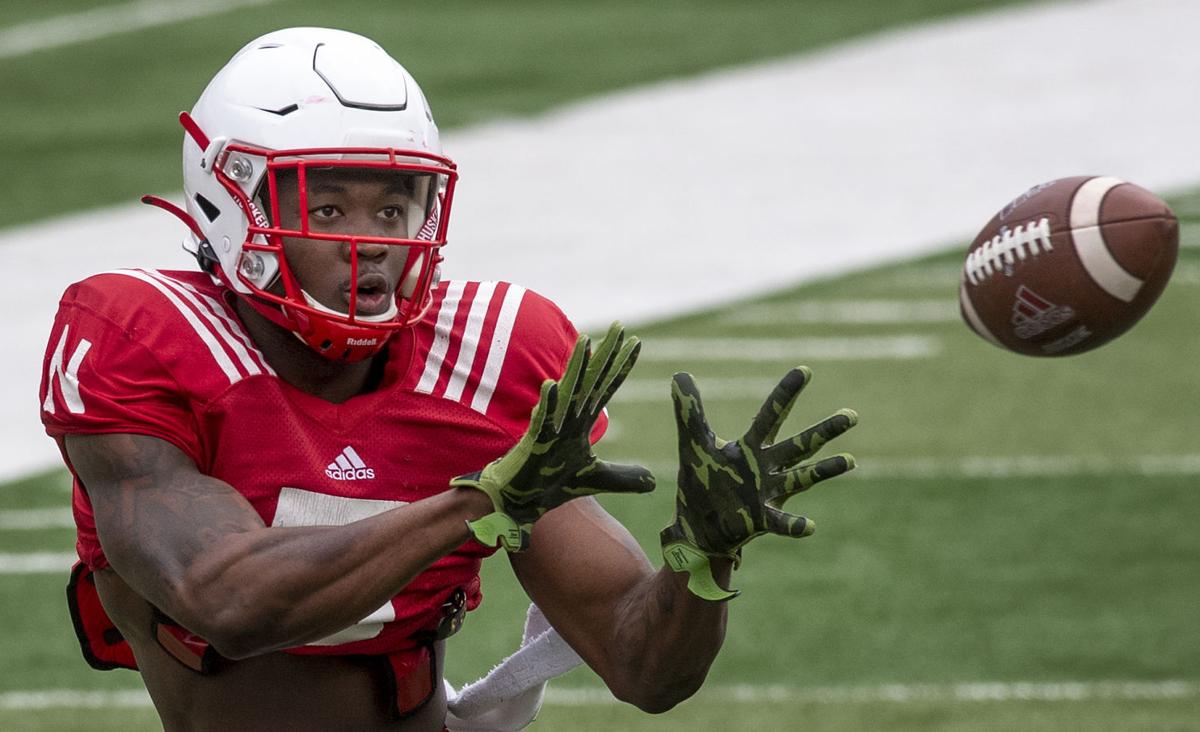 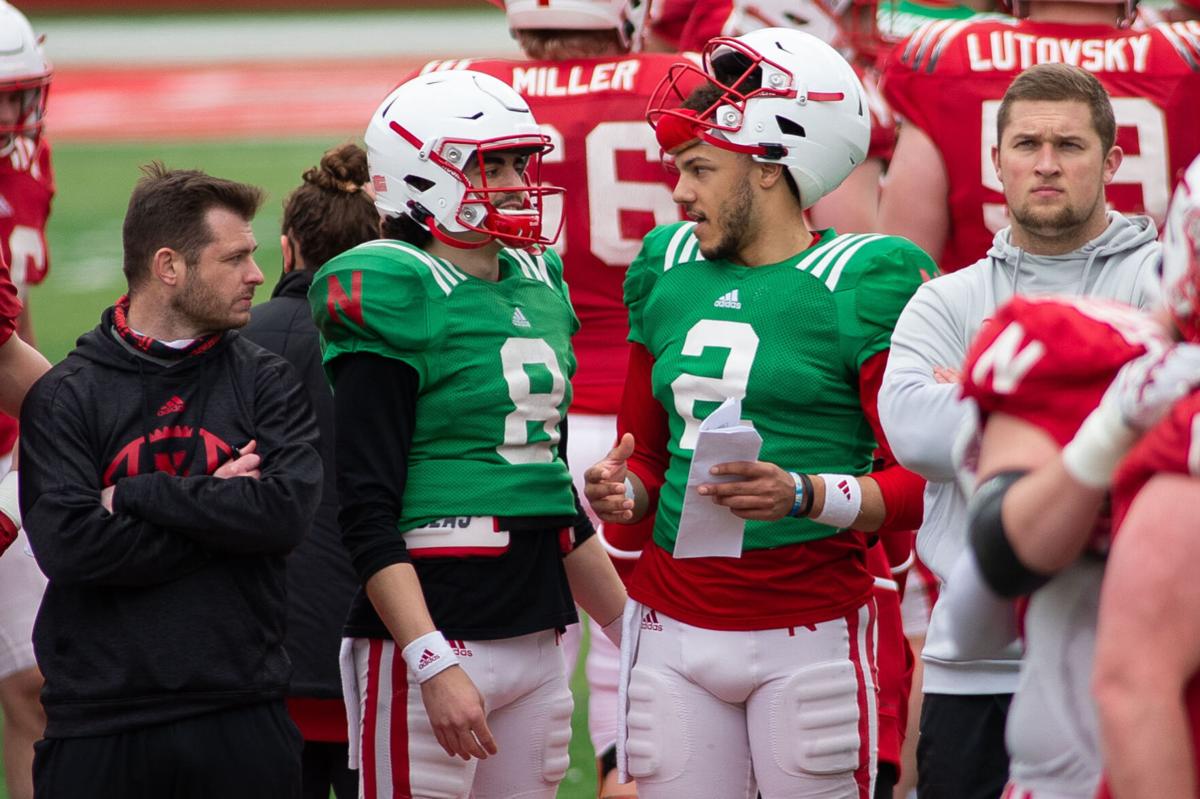 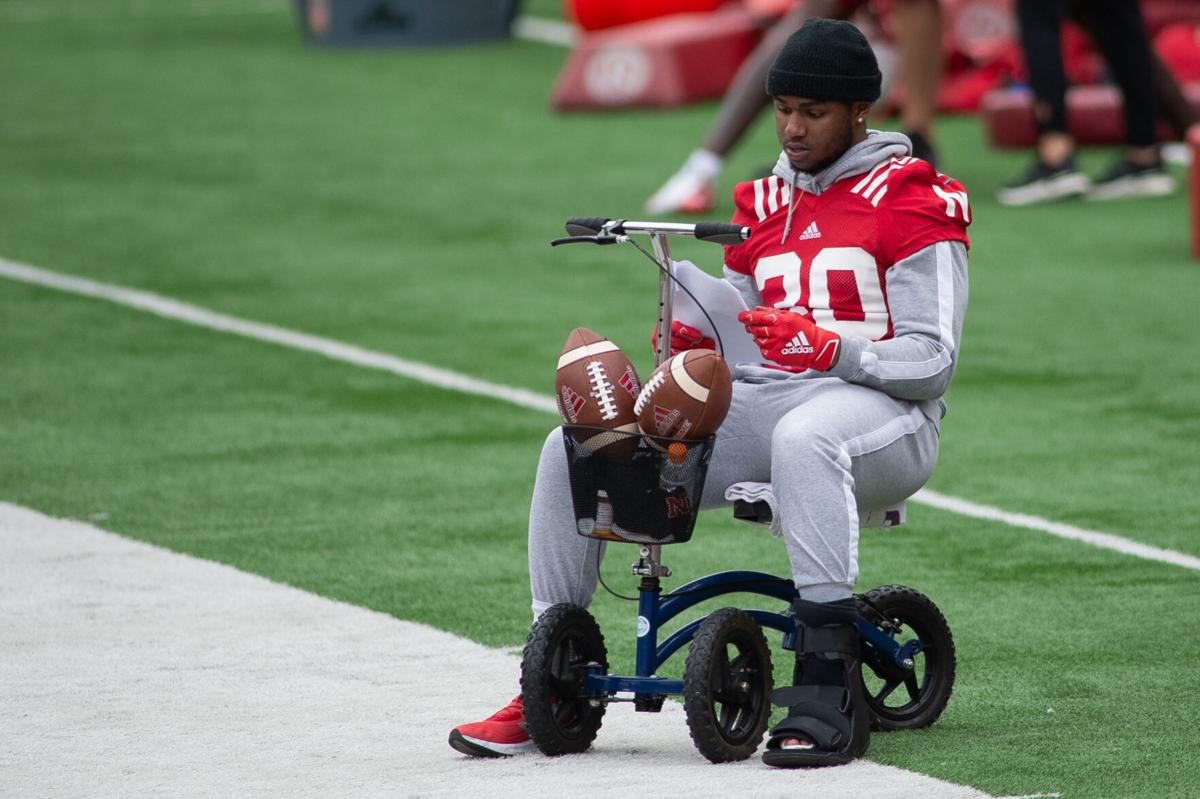 Sophomore running back Markese Stepp sits on the sideline during a football practice Saturday at Memorial Stadium.