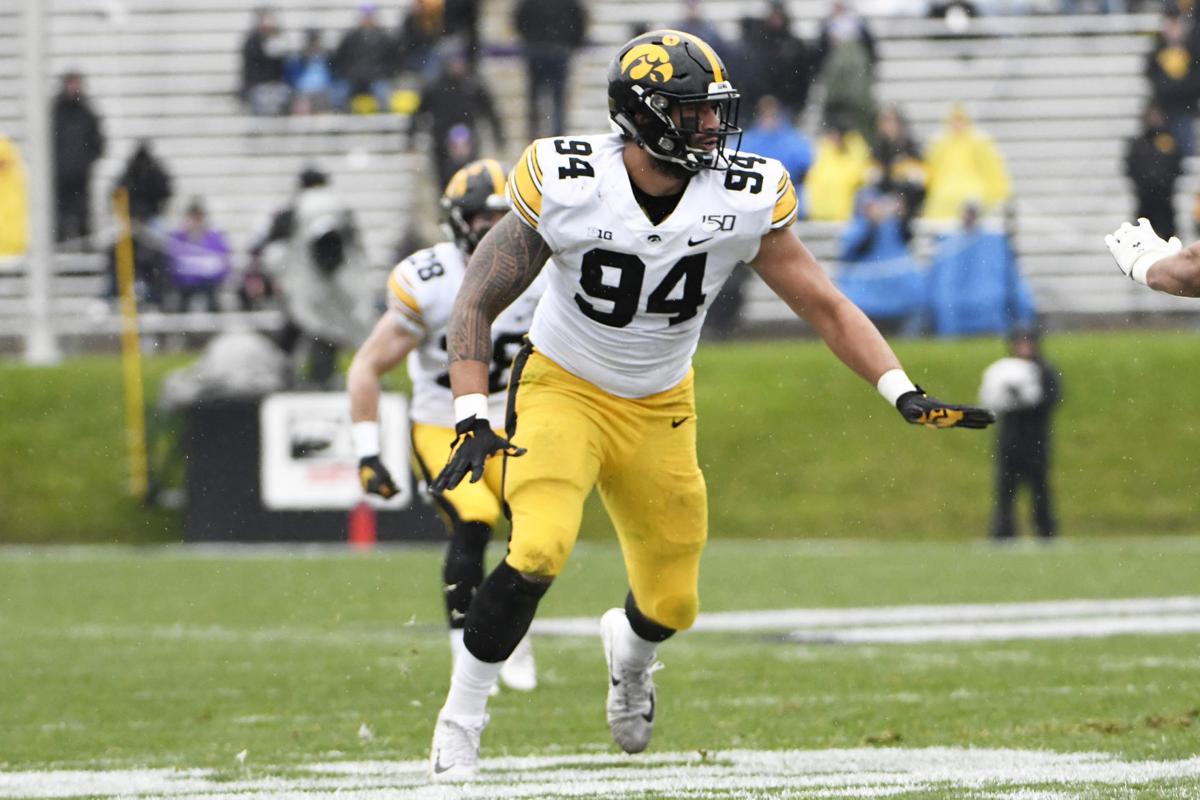 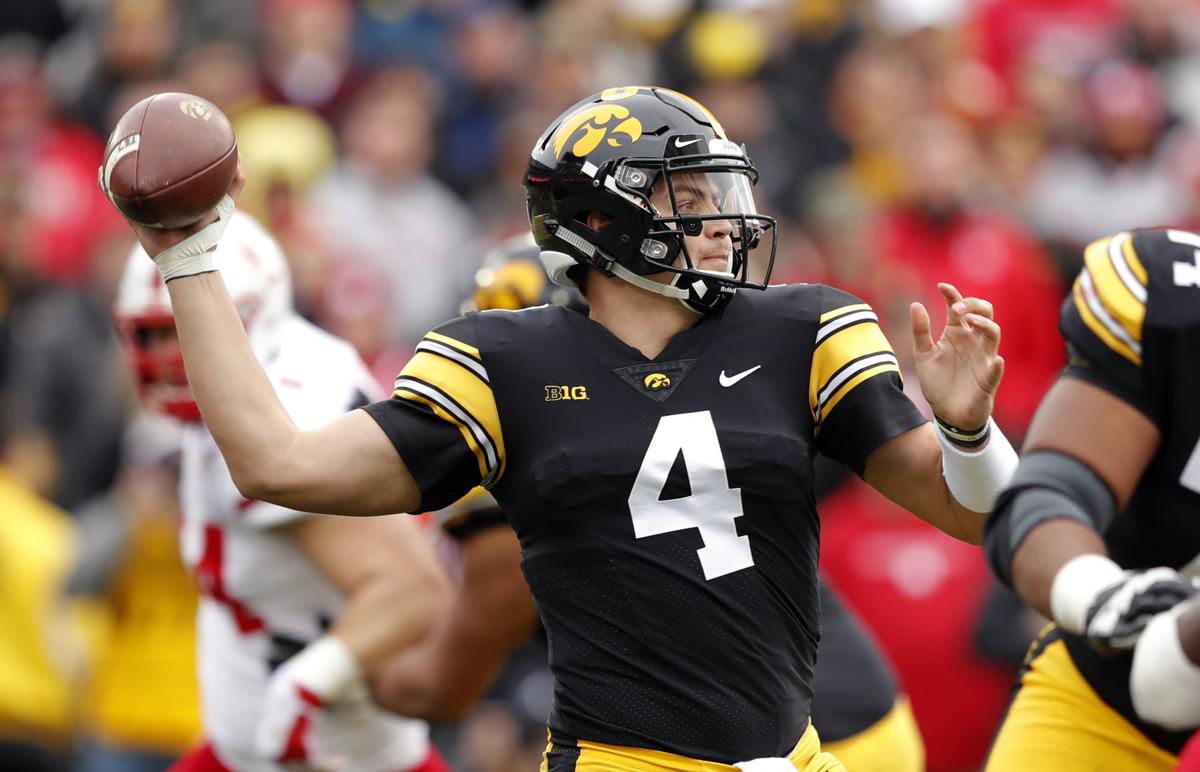 Iowa quarterback Nate Stanley throws a pass against Nebraska last season in Iowa City, Iowa. The longtime Hawkeye is on the verge of surpassing 8,000 passing yards in his career.

Why you may need Rolaids

1. By the numbers, this is shaping up as one of Iowa's best defenses in a long line of good defenses. The Hawkeyes are stout against the run and can pressure the quarterback in the passing game with a defensive line led by A.J. Epenesa and a talented secondary. Nebraska has made progress on offense in recent weeks, but the Huskers will have to be even better still against a Hawkeye defense that has limited eight of 11 opponents to their season-low point totals.

2. Motivation certainly shouldn't be a problem for an Iowa team that's just a few possessions away from having a truly special season. A chance to come in to Lincoln, with what looks like lousy weather on tap, and spoil Nebraska's chances of getting to a bowl game? That's about as delicious as it gets for a Hawkeye unit that has won four straight and five of the last six against the Huskers. And you know Kirk Ferentz will have his team ready to go.

3. Nebraska looked better against Maryland, but that was an opponent deeply lost in the woods. Iowa won't make it that easy. The Huskers must play better and find a way to not beat themselves against a high-quality opponent, something that hasn't happened yet this season. Iowa preys on mistakes. And NU has been more than happy to make them. The Hawkeyes' style of football lends itself to a lot of close games, where execution is often the difference.

1. If there's one thing Iowa's defense struggles against, it's a quarterback who can run. NU's Adrian Martinez has been a little better every week, especially in the run game, since returning from a midseason knee injury. With yards and points at a premium, a big Martinez performance could be a difference-maker. It nearly was last season in Iowa City, when he rushed for 76 yards and a touchdown, and threw for 260 yards and two scores. If he approaches those numbers again, Nebraska will have a shot.

2. Almost unbelievably, this could end up being the fourth consecutive season Iowa's running game has averaged less than 4 yards per carry. The Hawkeyes are currently at 3.7 for the season. Now, that hasn't meant much against Nebraska in recent years. But if the Blackshirts can stay disciplined enough to at least trend toward making Iowa more one-dimensional, that changes the complexion of the game immensely.

3. It's been talked about to no end, but a win Friday could do wonders for Nebraska as a program. There would be the bowl game that comes with a win, over course, and all the practices leading up to that game. But there's also other, less tangible benefits. A Nebraska win would break a four-game losing streak to Iowa. It would be Scott Frost's best win since becoming the head coach in Lincoln. It would give the red-clad fan base something to crow about to their eastern neighbors for the next year. Everything is on the table for NU. It's up to the Huskers to grab it.

This will be the ninth straight season Nebraska and Iowa meet on Black Friday. The streak ends next season, when the Huskers will play Minnesota at the end of the regular season.

Iowa's defense, always solid, is having one of its best years in program history. The Hawkeyes' 12.2 points allowed per game is the fewest for any Iowa team since 1959.

Three one-score losses to ranked teams have kept this from being a truly special season for Iowa. How much have those defeats stung this program as the year as gone on?

The initial sting was bad, especially the two-point loss at Wisconsin that ended their realistic West Division title hopes, but the Hawkeyes have been impressive in not letting it linger. They responded by taking down top-10 Minnesota the following Saturday and have rallied around the idea of trying to be just the sixth Kirk Ferentz team out of 21 to get to 10 wins. There’s still plenty to play for.

Where does this season’s defense rank on the list of all-time great units at Iowa?

Iowa’s 12.2 points allowed per game would be the program’s lowest mark since 1981, so certainly this unit is doing some impressive things. But I’d still put the 2004 and 2009 defenses ahead of this one, which only has one real star in defensive end A.J. Epenesa. The Hawkeyes haven’t given up more than 24 points in a game since last year against Nebraska. If Iowa can finish 10-3 and continue to rank in the top five nationally in scoring defense, then we can have a best-of-the-Ferentz-era conversation.

Kind of a broad question, but is there a way to sum up what Nate Stanley has meant to the Iowa program?

He’ll top 8,000 career yards on Saturday, but he will leave the Hawkeyes without a championship ring of any kind. His legacy, I think, will be more appreciated as time goes on, especially if he experiences NFL success. Stanley went 3-0 as a starter against good Iowa State teams and 3-0 against Minnesota and now has a chance to go 3-0 vs. Nebraska. I think he’s the perfect embodiment of the Kirk Ferentz program. Impeccable citizen, boring personality, remarkable stability (Friday marks his 38th straight start) and just produces.

Iowa has a great story in kicker Keith Duncan, but that also means the Hawkeyes haven’t been able to finish off drives with touchdowns. Is there any one thing to point to that’s keeping Iowa out of the end zone when they get red zone chances?

I can point to two things: The lack of a reliable running game (3.7 yards a carry) and sending two first-round tight ends to the NFL. Stanley was so reliant on T.J. Hockenson and Noah Fant for two years in the red zone, and now his best red zone wide receiver (Brandon Smith) is injured.

Nebraska QB Adrian Martinez had a big game last year in Iowa City. Is he the No. 1 concern for Iowa’s defense going into this game?

Definitely, especially after giving up nearly 200 yards rushing — including 90 on quarterback runs and scrambles — to Illinois last week. The Hawkeyes have only lost the turnover battle in two of their last 20 games, so creating mistakes by Martinez and the Nebraska offense is a top priority.

There's a path for the Huskers to sneak into a bowl even with a loss Friday, but beating Iowa is the simpler route.

Alex Conn and his Derby teammates will be playing for a Kansas state championship.

Parker Gabriel shares the latest about the upcoming Iowa game on Nov. 27, 2019.

Iowa quarterback Nate Stanley throws a pass against Nebraska last season in Iowa City, Iowa. The longtime Hawkeye is on the verge of surpassing 8,000 passing yards in his career.