As more criticism was focused on the three Husker players who chose to kneel during the national anthem, the university's president strongly defended their rights on Tuesday.

University of Nebraska President Hank Bounds said he "completely opposes" imposing any actions against the players or changing any policies that would restrict their ability to express themselves.

Regent Hal Daub of Omaha, who served two years in Korea during the Vietnam War-era, and a former Omaha mayor, said that student-athletes at NU “are not supposed to do things that create disparagement or negative implications.”

“It’s a free country,” Daub told the Journal Star on Tuesday. “They don’t have to play football for the university either.

"They know better, and they had better be kicked off the team."

Daub later denied saying that the players should be removed from the team in a phone call to the Journal Star, but he stood by his other comments on the players.

"They won’t take the risk to exhibit their free speech in a way that places their circumstance in jeopardy, so let them get out of uniform and do their protesting on somebody else’s nickel," he said.

“Those publicity seeking athletes ought to rethink the forum in which they chose to issue their personal views at the expense of everyone else."

Reacting to those comments and others, Regents Chairman Kent Schroeder of Kearney, a former Nebraska Air National Guard member and pilot, said any proposal to limit students' free speech -- even on the playing field -- "will not see the light of day."

If anyone was going to speak with the players about it, Schroeder said, it would be football coach Mike Riley or athletic director Shawn Eichorst.

"I understand their perspective and their point of view," Schroeder said of the players' actions. "I would hope that they would recognize their ability to do what they did was paid for by many people who aren't here anymore, but I applaud what they did."

It was not Riley's scheduled day to speak to the media after Tuesday's practice, but the Husker coach did stop briefly to answer a question on Daub's comments.

"It's kind of like the reaction that I had in answer to what I thought about our players. And it's everybody's right to have an opinion. And that's what makes America what it is," said Riley, who walked off the field alongside Rose-Ivey.

Since Saturday's game, opinions have been expressed from many corners, including Gov. Pete Ricketts, who during his statewide radio call-in show on Monday told a caller that the anthem protest was "disgraceful and disrespectful" to men and women who have sacrificed for the country, but that he "respect(s) the right of those players to protest."

Rose-Ivey responded the next day by sending a Tweet to Ricketts, asking for a meeting. Ricketts responded late Tuesday evening on Twitter, indicating plans to set something up.

During Monday's radio show, a caller suggested the players involved should lose their scholarships. "Kick them off campus," the caller said.

“My phone and email inbox are full of highly critical commentary," he said. "I find their copycat conduct -- which is what I call it -- offensive. I’m personally offended.”

Another regent, Rob Schafer of Beatrice, said as a current lieutenant colonel in the Nebraska Air National Guard with more than 31 years of military experience, he is “honored and privileged to be able to protect the very freedoms that these Nebraska football players have chosen to exercise.”

But, in a statement to the Journal Star on Monday night, Schafer said, “University of Nebraska athletics is a unifying source of pride for our state that should not be used as a forum for political or social debate."

“I do not support the venue these student-athletes chose to express their political or social viewpoint.”

Regent Jim Pillen of Columbus agreed with Schafer, saying while he supports the student-athletes' cause and encourages all students to become engaged in issues locally as well as globally, he questions using the team as a platform of protest.

"I believe in team above everything," said Pillen, a former football player at Nebraska. "I don't think any of those student-athletes would want me to represent them on the Board of Regents if I took my personal agenda to the table."

On Monday, Rose-Ivey spoke at a team news conference about the decision to kneel ahead of the game on Saturday, saying he and his teammates chose to pray for their country while the national anthem was performed.

The Husker linebacker from Kansas City, Missouri, said the decision to kneel was to bring attention to the “policies and laws that discriminate and hinder the growth and opportunity of people of color, low income people, women and other marginalized communities.”

“To make it clear, I am not anti-police, I’m not anti-military, nor am I anti-American,” he added. “I love my country deeply.”

Rose-Ivey said he chose to kneel to "make the world a better place for the next generation."

A policy of the Board of Regents that has existed for a half century addresses demonstrations, stating: "The public exploration and resolution of differing views can be successful only when groups and individuals discuss the issues in forms where the right to disagree, speak freely, and be heard is preserved."

"Within this context, the University community recognizes peaceful demonstrations as a legitimate means of expressing one's opinion."

In his statement, Schafer referred to comments made last weekend at the opening of the National Museum of African American History and Culture in Washington, D.C., by former President George W. Bush, who said “the journey toward justice is still not complete.”

“Many African-Americans believe the justice system is tilted against them, and too many Americans of every skin color are victims of violence,” Schafer said. “These are real issues that cannot be ignored and should be addressed through conversations and positive actions in our homes, in our schools, in our communities, and across our states and nation.

“A starting point is to initiate dialogues regarding our differences and to instill in our young people respect for all life.”

Pillen said he doesn't support penalizing players or any university employees over the actions taken Saturday.

"I support these kids for having beliefs and convictions, and I admire they have the courage to stand up for what they believe in," he said. "I'm just not a supporter of the venue."

UNL last year began addressing several issues surrounding diversity training for students, faculty and staff, and Chancellor Ronnie Green said at his state of the university address last week that early next year the university will take part in a “diversity mapping” led by a consulting firm.

Bounds, himself a former National Guardsman of the Year in Mississippi, said on Tuesday the idea of academic freedom at a university extends to the playing field.

The university would not stop students who pause to pray before the game or after a big play, he said. Nor would student-athletes be stopped from sharing a controversial opinion in class.

"I have a deep love of this country and a love of the flag, and I certainly recognize freedom isn't free," he said. "Nebraskans have expressed their opinions on the actions -- some were supportive, some disagree and some passionately disagree."

Since Saturday, Bounds said he has received no more than 10 emails about Rose-Ivey and others' actions. He said he has spoken with Green and Eichorst about the issue.

Regent Tim Clare of Lincoln, who said he learned about the players' plan to kneel shortly before the national anthem was played on Saturday, believes the players' actions are protected speech under the U.S. Constitution and university policy.

Although he wouldn't say whether he agreed or disagreed with what the players did, Clare did say he feels it is important that the players were able to express their opinion.

"The flag is what gives them all the right to exercise free speech," he said.

Three Husker players speak out on why they knelt during anthem

Two days after kneeling together in prayer during the national anthem, Husker players Michael Rose-Ivey, DaiShon Neal and Mohamed Barry all sp…

Linebacker Michael Rose-Ivey delivers a statement about his decision to kneel during the national anthem before last Saturday's game.

Ricketts to meet next week with Husker who knelt during anthem

Gov. Pete Ricketts' staff is working to arrange a bye-week meeting between the governor and Husker Michael Rose-Ivey, who knelt during the nat…

If Nebraska's Michael Rose-Ivey and teammates want to kneel during the national anthem again, their next opportunity will be the Nov. 5 game a…

National anthem plays out without incident, but opinions remain mixed

On the first Saturday after three Nebraska players took a knee during the national anthem, sparking contentious responses from politicians and…

Ernie Chambers 'very proud' of Huskers who knelt during anthem; Ricketts 'ought to be ashamed'

Ernie Chambers compared himself to an old lion inspired by the act of some young cubs.

The email dropped into University of Nebraska Regent Hal Daub’s inbox just before 9:30 a.m. on Sept. 25, the morning after Nebraska's football…

UNL again finds itself in midst of free speech debate

Kaitlyn Mullen was back at her table in front of the Nebraska Union on Tuesday, pushing “Socialism Sucks” and “Big Government Sucks” fliers an…

After simmering on social media and conservative news sites for a weekend, images of University of Nebraska-Lincoln employees protesting a stu…

As the University of Nebraska works to close a $49 million budget gap, the Board of Regents will offer system President Hank Bounds a contract…

Ahead of Super Bowl, Ricketts urges Nebraskans to make stand by standing for anthem

More than a year after three Husker football players chose to kneel during the national anthem, Gov. Pete Ricketts on Saturday issued a procla…

Hispanic student who stayed seated during anthem told to 'go back' by teacher, students say

CHICAGO (AP) — A Chicago teacher accused of telling a Hispanic student she should go back to her own country after she refused to stand for the national anthem has been removed from the classroom while district officials investigate, the school's principal said. 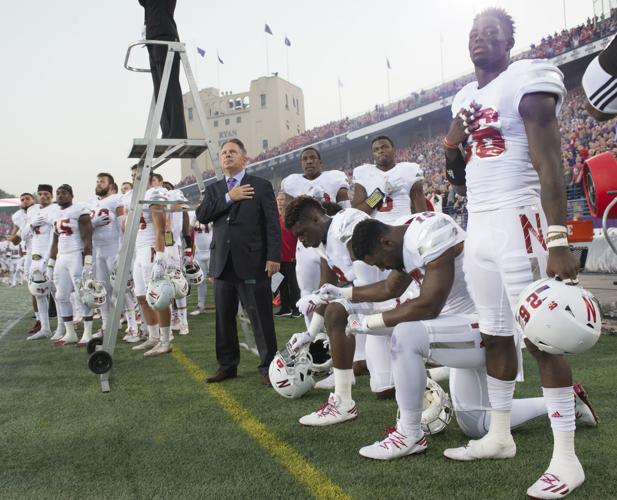 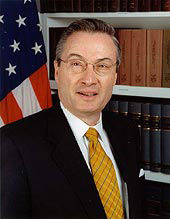