QB run game hasn't taken off for Huskers yet, but a look at the numbers show some positive signs
View Comments
Share this
{{featured_button_text}}
1 of 2 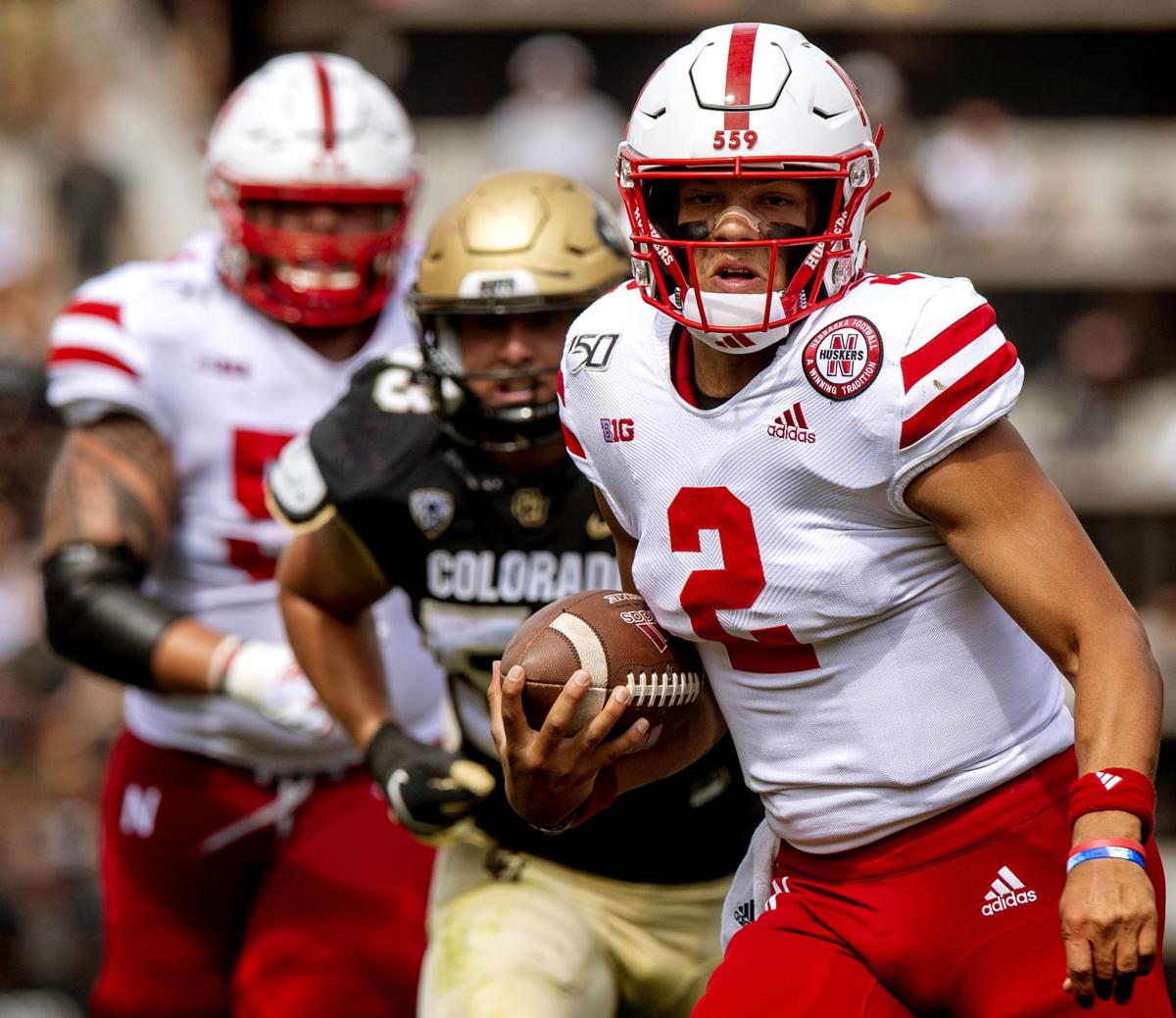 Nebraska quarterback Adrian Martinez rushes against Colorado in the second quarter on Sept. 7 at Folsom Field in Boulder, Colo. 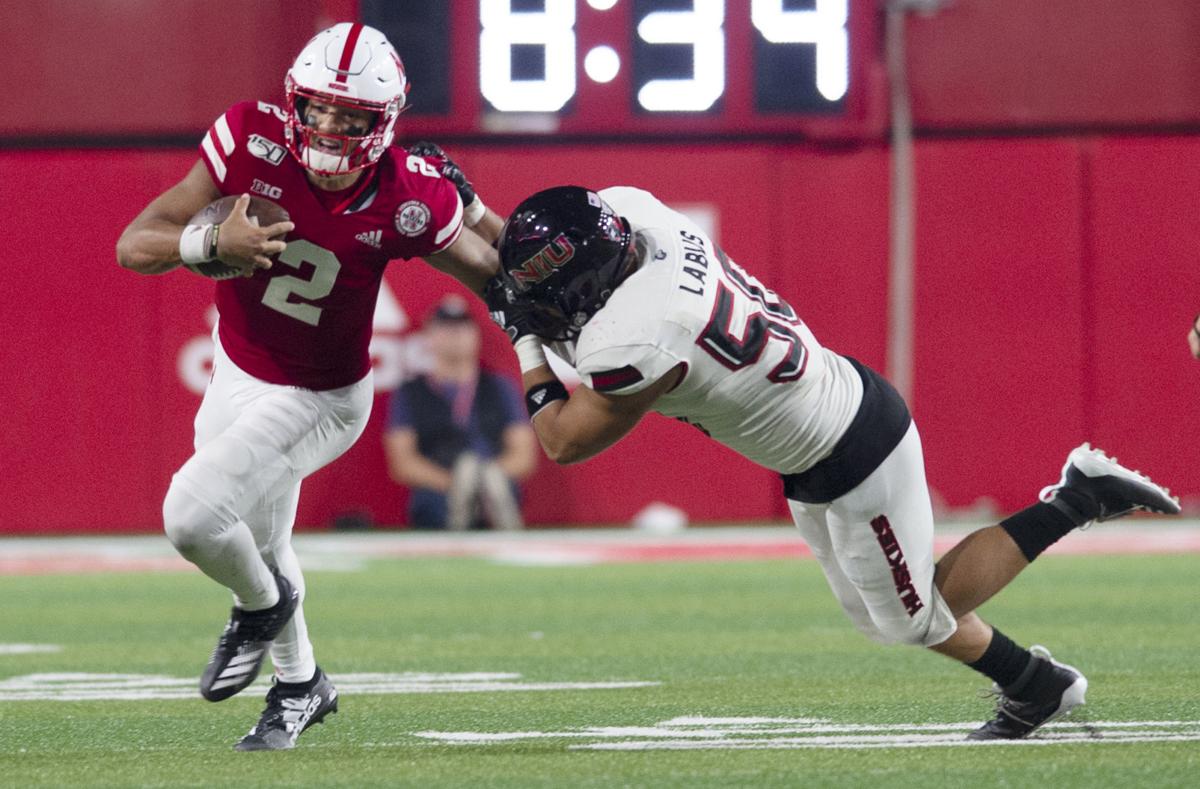 On Nebraska’s first offensive drive of the third quarter last week against Northern Illinois, coach Scott Frost found himself with just the kind of decision that will take your temperature.

One week after the Huskers blew a 17-point lead and lost a woulda-coulda-shoulda game against Colorado — an outing that included four straight third-quarter punts when one score might just have sealed it — the offense found itself in a familiar situation.

Leading 30-8, NU’s opening drive of the second half stalled at its 44-yard line and the Huskers found themselves facing fourth-and-1.

Frost said he listened to his assistant coaches and some “outside voices” after the loss to Colorado and told himself he’d stay aggressive and call games by his own mantra — "a desire to excel and no fear of failure" — more resolutely.

So he kept his offense on the field and put the ball in the hands of sophomore quarterback Adrian Martinez. Martinez, by the look of it, almost certainly knew the end man on the line of scrimmage, NIU linebacker Vinny Labus, would be unblocked. He kept the ball anyway, won a race with Labus to the sideline and picked up 6 yards for a first down.

The drive didn’t result in points, but it felt like the tone had been set. Nebraska scored on its next possession to more or less salt the game away.

This is the kind of advantage Martinez gives Nebraska’s offense. He can bull forward for a yard when needed. He can win mano a mano in critical situations. He can make a throw from the 35 to the back corner of the end zone along the sideline and put it where only his guy can go get it.

“He’s played well enough for us to win in every game and I think he’s got better in every game,” Frost said Monday. “The one thing we keep talking about, is when he is decisive and makes the decision to let it rip or when he keeps it and runs, he is really good.”

Quarterback Adrian Martinez talks about Big Ten play and the quest to win a road game on Sept. 16, 2019.

One element that hasn't come around so far, though, is consistency in the quarterback run game.

Are teams playing him differently? Surely he’s at the top of every team’s scouting report now, where perhaps as a rookie he was not.

“It’s definitely possible. I think teams, as far as I know, are basically just going with their normal approach,” Martinez said this week. “But I guess they might be putting a little more emphasis on it. We’ll see when we get into the Big Ten. Those guys are going to be more familiar with us and us with them. We’ll see how they react.”

In the passing game, Martinez’s completion rate has dipped from 64.6% in 2018 to 60% this year, but he’s also getting bigger chunks. Martinez’s yards per attempt, for example, have jumped from 7.5 to 9.7.

In the run game, though, it hasn’t quite clicked.

Martinez is credited so far with 43 rush attempts for 116 yards (2.7 per attempt) and three touchdowns.

He’s been sacked eight times, which accounts for 50 lost yards. So, adjusting for those plays, Martinez otherwise has 35 rushes for 166 yards (4.7). That looks somewhat better, and Martinez has saved significant yardage already through three games by avoiding or minimizing losses in scramble situations. A throwaway is better than a sack and he’s made plays outside the pocket, like a 26-yard dart to Mike Williams last week.

Still, of Martinez’s 35 nonsack rush attempts, he’s been stopped for 2 yards or less 13 times (37%). That, combined with the lack of big plays, is the evidence supporting the feeling that a piece of the puzzle is missing.

“There’s one or two times where he pulled the ball and maybe instead of bursting, tried to make a move and that sort of thing,” NU quarterbacks coach Mario Verduzco said. “Make a decision and let’s go.”

Of Martinez’s run-game performance overall, Verduzco says, “For the most part it’s been pretty good. But there again, you’d like to see him be maybe at times a little bit more decisive, maybe get a few more yards if he possibly can for us. But otherwise, I’ve been pretty pleased with him and I think Coach Frost has been, too.”

In Nebraska’s nine remaining regular-season games, seven will feature defenses that have seen Martinez before. So, too, had Colorado. In that game, Martinez was sacked six times for minus 33 yards, but otherwise ran 13 times for 99 yards and two touchdowns.

So what’s in store the rest of the way? Defenses know more about Martinez, but his confidence showed Monday when he answered a question along that line of thinking.

“I think something to take into consideration is that I’ve seen them, as well,” Martinez said.

Game On: A closer look at how the Huskers and Illini match up

Time to level up. Parker Gabriel breaks down Saturday's matchup between Nebraska and Illinois.

Life in the Red: Finally in a comfortable rhythm, No. 2 QB Vedral ready to go 'at a moment's notice'

Nebraska head coach Scott Frost this week told the Journal Star he wants media to ask him about certain play-calls if they disagree or don't understand his decisions. He says he welcomes those interactions, especially if they lead to increased understanding.

Frost on the radio: OL Broc Bando can play guard or tackle, will be ready, 'when his number is called'

Scott Frost talked about the trust he has in Broc Bando during Thursday's "Husker Sports Nightly" radio program.

Husker Extra hot topic: What is Nebraska's place in the Big Ten now the conference play is underway?

The Huskers landed a verbal commitment from four-star defensive back Henry Gray (Miami) on Thursday evening, the first of what NU thinks could be several of the weekend’s six official visitors to choose to play college football in Lincoln.

The latest in Nebraska's kicking saga: NU added Matt Waldoch, a 6-foot, 170-pound sophomore originally from Geneva, Illinois, to its roster this week as a walk-on kicker.

Jahkeem Green, a 6-foot-5, 305-pound juco transfer defensive tackle, has yet to see the field.

"It's going to take Scott Frost until maybe his fifth recruiting class for him to say, 'I not only have enough guys who can really play, but I also have enough guys who can back them up,'" Millen said of the second-year Nebraska head coach. "It'll take him awhile to get the kind of depth you're looking for. There's just not enough bullets in the gun right now."

Nebraska quarterback Adrian Martinez rushes against Colorado in the second quarter on Sept. 7 at Folsom Field in Boulder, Colo.